Esophageal perforation (EP) is a therapeutic challenge because of its lethality. More than half of the perforations are iatrogenic, and most cases occur during endoscopy (1-6). Other causes include spontaneous rupture (Boerhaave’s syndrome), foreign body ingestion, trauma, and intraoperative injury. Although relatively infrequent, malignancy could cause increased intraluminal pressure, and eventually lead to esophageal rupture. Besides, EP could also occur during or after radiotherapy for esophageal cancer (7). Chen et al. retrospectively analyzed 322 patients with esophageal carcinoma who received radiotherapy for unresectable, residual or recurrent tumors. They identified that patients with T4 stage, extracapsular lymph node involving the esophagus and re-irradiation were risk factors for esophageal perforation. In the current report, we described a patient with T3 esophageal cancer who incidentally underwent transcatheter arterial embolization (TAE) because of tumor bleeding. This patient had subsequent EP during neoadjuvant chemoradiotherapy (CRT). To our knowledge, TAE used in this clinical setting is rare and might be related to EP in the absence of T4. We present the following case in accordance with the CARE reporting checklist (available at ).

A 58-year-old female was referred to our hospital. Her present illness could be traced to four months ago when progressive dysphagia and epigastric pain developed, which were accompanied by apparent body weight loss of 20 kilograms in eight months. She visited nearby hospital and a tumor located at the middle third of esophagus was identified through upper gastrointestinal endoscopy. Biopsy was performed and moderately differentiated squamous cell carcinoma was confirmed. Imaging studies with computed tomography (CT) of chest and positron emission tomography confirmed a clinical stage III esophageal cancer (cT3N1M0, according to 8th American Joint Committee on Cancer) (Figure 1). Neoadjuvant CRT followed by surgical intervention was discussed with the patient and was subsequently planned. Unfortunately, tumor bleeding was noticed prior to treatment and emergent therapeutic embolization was conducted thereafter at our hospital. The serial angiograms showed several hypervascular stains at the middle esophagus with focal extravasation of contrast agent (Figure 2). The bleeding esophageal artery was originated directly from the aorta. 0.5 mL of N-butyl-2-cyanoacrylate (NBCA) mixed with 1 mL of lipiodol was successfully injected. After few days of medical treatment, the bleeding stopped and the hemoglobin level was stabilized. She then underwent CRT with platinum-based regimen (cisplatin and paclitaxel). The radiation dose was planned to 43.2 and 48 gray (Gy) in 24 fractions using intensity-modulated radiotherapy and simultaneous integrated boost technique. 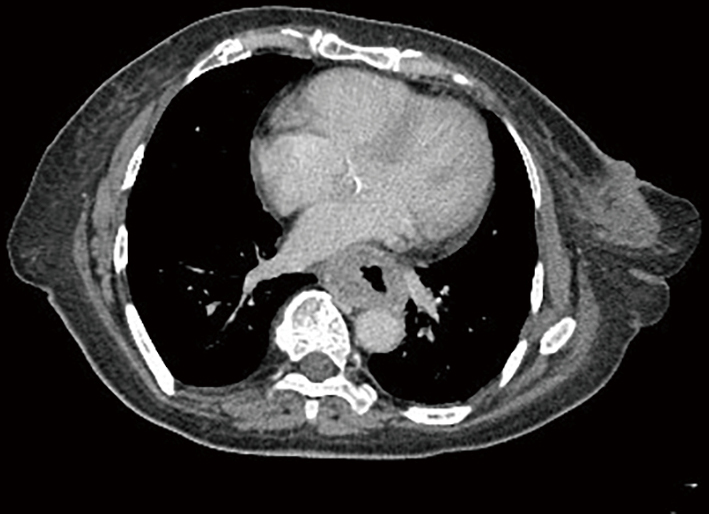 Figure 1 Computed tomography (CT) of chest with contrast at diagnosis. 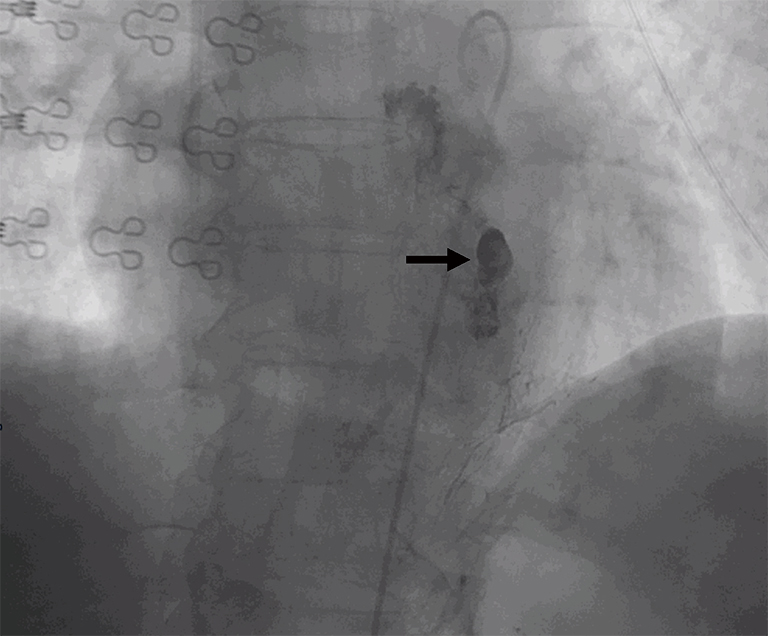 After two courses of chemotherapy and 21 fractions of radiotherapy, she complained of dizziness and weakness for three days, accompanied by nausea, vomiting, poor appetite, chest pain and tightness. Therefore, she was sent to our emergency room. On physical examination, fever up to 38.8 degrees was noticed. Blood pressure, pulse rate and respiratory rate were 100/71 mmHg, 115/minutes and 20/minutes, respectively. Laboratory results showed hyperglycemia, hyponatremia, anemia and elevated C-reactive protein. Pneumonia was initially impressed and was managed with empiric antibiotics. However, after six hours of conservative management, the systolic blood pressure suddenly dropped to 87 mmHg. Isotonic saline infusion and red blood cell transfusion were then performed. Emergent chest CT with contrast disclosed pericardial effusion with focal free air formation within the mediastinum, suggestive of EP (Figure 3). Upper gastrointestinal endoscopy identified a huge ulcerative mass, comparable with the CT findings (Figure 4). The patient was intubated and subsequently managed at our intensive care unit. Pericardial window was performed due to cardiac tamponade. Bacterial culture of the pericardial fluid yield positive Pseudomonas aeruginosa. After discussion with the patient and her family, metal stent for the EP was refused. They selected nonoperative management and supportive care. The patient’s condition exacerbated due to progressive sepsis and died one month later due to multiorgan failure. All procedures performed in studies involving human participants were in accordance with the ethical standards of the institutional and/or national research committee(s) and with the Helsinki Declaration (as revised in 2013). Written informed consent was obtained from the patient. Detailed timeline was shown in Figure 5.

Figure 3 Computed tomography (CT) of chest with contrast at perforation. (A) The axial view of CT disclosed cardiac tamponade and pleural effusion. White arrows indicate these two findings. (B) The coronal view of CT showed pneumomediastinum. White arrow indicates the presence of air in the mediastinum. 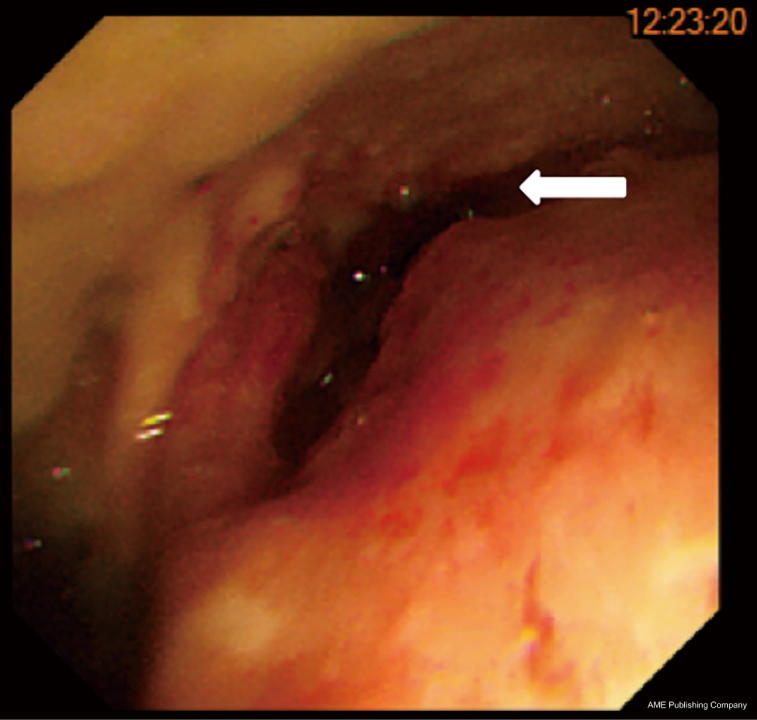 Figure 5 Brief timeline of this case.

Despite current advances in medicine, EP remains a challenging and life-threatening emergency. The mortality rate was high, with an estimation of 12% and mean hospital stay of 33 days (8). Due to its rarity and lethality, prospective evaluation of the etiology and natural course is restricted and most data is derived from retrospective series or national studies (9).

The causes of EP are heterogeneous, which comprise a spectrum of conditions ranging from endoscopic instrumentation to spontaneous rupture. Among them, esophageal cancer accounts for ten percent (10). And in esophageal cancer patients, the incidence of EP was about five percent (7) and could rise to 20–33.3% in the setting of re-irradiation (7,11). Liedman et al. previously reported six cases of middle and lower third esophageal cancers with EP (12). All EPs in their study were caused by barogenic trauma during or after endoscopic dilatation. Beside the increased intraluminal pressure during procedure, spontaneous perforation has also been reported for esophageal cancer (13,14). Chen et al. analyzed the largest number of EP from esophageal cancer, and reported that 5.6% EP occurred during (10 cases) and after (8 cases) conformal radiotherapy, with (9 cases) and without concurrent chemotherapy (7). After multivariate adjustment, they identified that age less than 60, T4 tumor, extracapsular lymph node involving the esophagus and re-irradiation were associated with a higher risk of EP. They thought younger age could enable patients to undergo CRT, which could accelerate tumor shrinkage while normal tissue repair is suppressed. Additionally, a fistula may form during the tumor shrinkage. In a study by Ohtsu et al., EP occurred in five of 54 patients during CRT and all of them had T4 lesions and fistulas (15). Taken together, it seems the presence of T4 lesions and extracapsular lymph node, which have invaded adjacent tissues, exposes esophageal cancer patients to a higher risk of EP during the cytotoxic treatment.

Concurrent with radiotherapy, the normal tissue repair could be further suppressed, which may lead to hypoplasia of esophageal mucosa in the radiation field (16,17). Additionally, our patient underwent TAE because of episodes of tumor bleeding, which may alter the microenvironment and aggravate the hypoplasia. Among the 18 cases of EP reported by Chen et al., 7 patients experienced EP at the first time of CRT; 4 patients were T4 and 2 patients were T3. For those with T3, extracapsular lymph nodes invading the esophagus was both noted. When examining the patient in our case report, she didn’t have T4 disease or ENE involving the esophagus. Considering the incidence rate of 5.6% and no other risk factors, TAE is the most possible culprit in inducing EP in this patient. In fact, TAE with NBCA has been used for esophageal bleeding for many years (18,19). The use of NBCA is advantageous for patients with coagulopathy and it has high success rate of occlusion. Despite being mentioned as a possible concern, there has been no formal report about ischemic injury or subsequent perforation related to NBCA (18). Nevertheless, in the management of malignancy, healthy tissues are almost always affected and the extent of adverse effects depends on the complex interaction of separate therapeutic modalities. Therefore, we thought the patient’s EP might be caused by the interplay of tumor shrinkage during CRT and the ischemia induced by embolization of esophageal artery, which precipitated the spontaneous EP. However, this requires further prospective study for confirmation.

Early diagnosis and timely management of EP are challenging, but both of them are crucial for managing patients (20-22). Diagnosis can be difficult, due mainly to variable and non-specific symptoms, and should consist of repeated and detailed examination when there is persistent clinical suspicion. The pain relevant to EP is often acute and sudden in onset, with radiation to the back or to the left shoulder, which is followed by vomiting and shortness of breath in about 25% of patients (23). Diagnosis depends on radiographic evidence, including chest radiograph with water-soluble contrast agent, CT with oral contrast and upper endoscopy (24). There are many treatment options, and a multidisciplinary approach is needed. Medications such as antibiotics, proton-pump inhibitors, and so forth can be administered as necessary. Percutaneous drainage or endoscopic therapeutic procedures should be considered according to the clinical situation.

To our knowledge, this is the first report of spontaneous EP preceded by TAE. Unfortunately, the patient died eventually with nonoperative treatment. In general, EP is a surgical emergency and should be immediately managed regardless of etiology (25,26). Without rapid intervention, leakage of esophageal contents into the mediastinum occurs, causing inflammation, sepsis, multiorgan failure and death (27,28). The mortality rate is nearly doubled from 14 to 27 percent for EP diagnosed 24 hours later, underscoring the significance of early detection (27). Moreover, in the retrospective study from England, 2,564 patients were studied and the author showed that patients with EP related to esophageal cancer were more likely to receive supportive treatment and the presence of esophageal cancer was significantly associated with increased 30- and 90-day mortality rates (9). Our patient was confirmed to have EP almost 3 days later and was found to have sepsis due to mediastinal infection, which portended her poor prognosis.

To restore luminal integrity and prevent further extraluminal soilage in patients with advanced mediastinal sepsis or large esophageal defects, endoscopic stent could be used in carefully selected patients (29). For our patient, apparent pneumomediastinum and sepsis necessitated further intervention in addition to the broad-spectrum antibiotics and fluid resuscitation. Despite the estimated poor outcome, maintenance of the esophageal integrity could prevent exacerbation of sepsis and increase the likelihood of recovery and survival. In the setting of esophageal malignancy, though not performed in our case, endoscopic stent should be placed.

Our case might have several limitations. Firstly, early diagnosis was not achieved as she suffered from acute onset of symptoms for three days. Secondly, appropriate management was not performed, even though broad-spectrum antibiotics and fluid resuscitation were given. Thirdly, tumor bleeding was underestimated and it could represent a sign of advanced cancer, esophageal stent to avoid any presence of small perforation might be an alternative approach before CRT.

In conclusion, we reported a case of EP during CRT in an esophageal cancer patient. Early diagnosis and timely intervention are important to prolong survival. Here we stressed out its possible relation with TAE and the risk of EP should be carefully evaluated when CRT is attempted.

Conflicts of Interest: All authors have completed the ICMJE uniform disclosure form (available at http://dx.doi.org/10.21037/tro-20-54). The authors have no conflicts of interest to declare.

Ethical Statement: The authors are accountable for all aspects of the work in ensuring that questions related to the accuracy or integrity of any part of the work are appropriately investigated and resolved. All procedures performed in studies involving human participants were in accordance with the ethical standards of the institutional and/or national research committee(s) and with the Helsinki Declaration (as revised in 2013). Written informed consent was obtained from the patient.