In the past decade, checkpoint inhibitors have engendered considerable changes in several immunotherapy strategies. Despite the rapid advancement in checkpoint inhibitor immunotherapy, the utility of such immunotherapy in the treatment of neuroendocrine tumors (NETs) is relatively unknown, and treatment options for progressive disease are limited. Combination of immune checkpoint inhibitor and radiotherapy can enhance the treatment effects, which has been documented in melanoma, lung cancer, and other metastatic diseases. Herein, we report the case of a 62-year-old woman with primary hepatic neuroendocrine carcinoma (NEC) who developed leptomeningeal metastases (LM) following combined treatment with two cycles of nivolumab 200 mg per dose and whole-brain radiotherapy in 3 weeks with complete response. We present the following case in accordance with the CARE reporting checklist. (available at http://dx.doi.org/10.21037/tro-19-103).

A 62-year-old Taiwanese woman with primary hepatic NEC had received first-line and salvage chemotherapy with partial response for 2 years, but the disease progressed later. Before she denied any medical or family history. She visited our hospital to seek a second opinion. An enhanced computed tomography scan revealed multiple hepatic tumors (Figure 1); these tumors were subsequently confirmed pathologically through a liver biopsy to be poorly differentiated carcinoma with neuroendocrine differentiation (Figure 2). Microscopically, we observed solid sheets infiltrating the liver parenchyma that were composed of pleomorphic tumor cells with hyperchromatic nuclei, salt-and-pepper chromatin, indistinct nucleoli, light eosinophilic cytoplasm, frequent mitosis, and tumor necrosis. Immunohistochemically, the tumor cells were positive for cytokeratin, CD117, CD56, and chromogranin; negative for synaptophysin; and weakly positive for PD-L1 expression. A few days after the diagnosis, she developed severe dizziness followed by reduced consciousness and epileptic seizures. Conventional biochemical examinations including routine blood, urine, liver, and kidney function tests revealed normal results. Enhanced magnetic resonance imaging (MRI) reported disseminated metastatic lesions in bilateral cerebral hemispheres and cerebrospinal fluid (CSF) spaces, resulting in diffuse pial matter enhancement in the supra-and infratentorial spaces. (Figure 3). At that time, the patient and her family refused aggressive intervention such as CSF analysis, intrathecal chemotherapy or craniospinal irradiation. The patient underwent whole-brain three-dimensional conformal radiotherapy with 6-MV X-ray beams; the radiotherapy process involved a total radiation dose of 30 Gy administered in 15 fractions (Figures 4,5) along with two cycles of nivolumab administered at 200 mg per dose in 3 weeks. During the treatment, neutropenia, thrombopenia, and seizures were observed but were resolved with medication. The patient tolerated the treatment well, and her symptoms were rapidly alleviated. An MRI process conducted 1 month after the treatment revealed disappearance of the LM (Figure 6), but the primary hepatic tumors had progressed (Figure 7). After the patient received two additional cycles of nivolumab, her disease progressed with an increase in hepatic nodules (Figure 8). She died because of septic shock but without signs of hepatic failure. The patient’s overall survival time was 27 months, and she had survived for 3 months from the time of diagnosis of LM (Figure 9). All procedures performed in studies involving human participants were in accordance with the ethical standards of the institutional and/or national research committee(s) and with the Helsinki Declaration (as revised in 2013). The consent was waived for this study by the IRB committee at the Taipei Medical University Hospital since the patient died. The study was approved by Taipei Medical University-Joint Institutional Review Board (N201710026).

Figure 1 Contrast-enhanced CT scan of the abdomen. (A) Axial and (B) coronal views revealing multiple tumors in both liver lobes. CT, computed tomography. 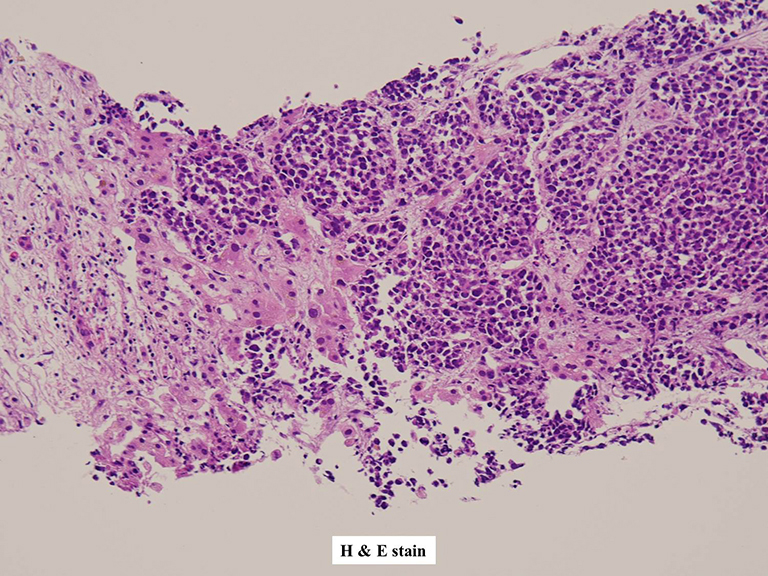 Figure 5 Dose–volume histogram for the (A) tumor and (B) critical organs. 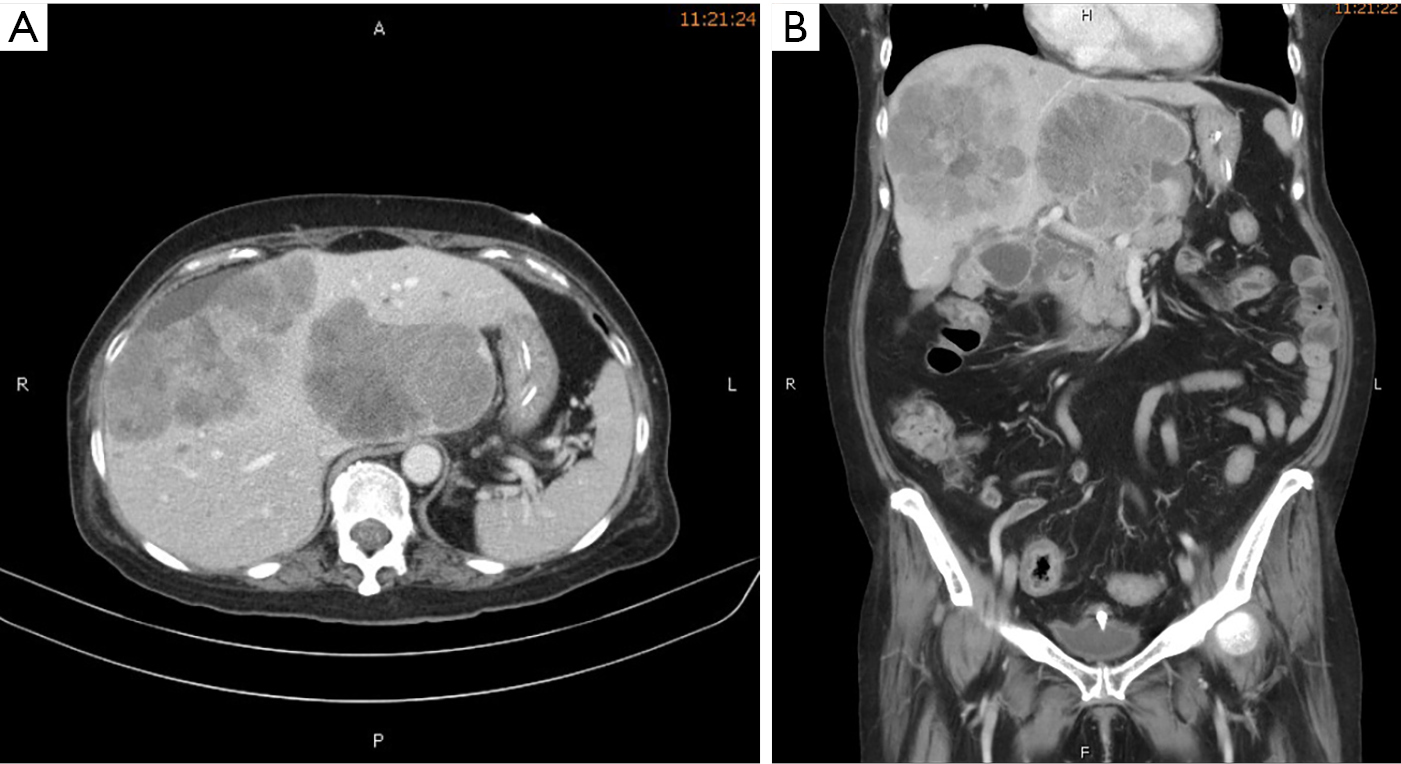 Figure 7 Contrast-enhanced CT scan of the abdomen 1 month after completion of brain irradiation. (A) Axial and (B) coronal views revealing progression of hepatic tumors. 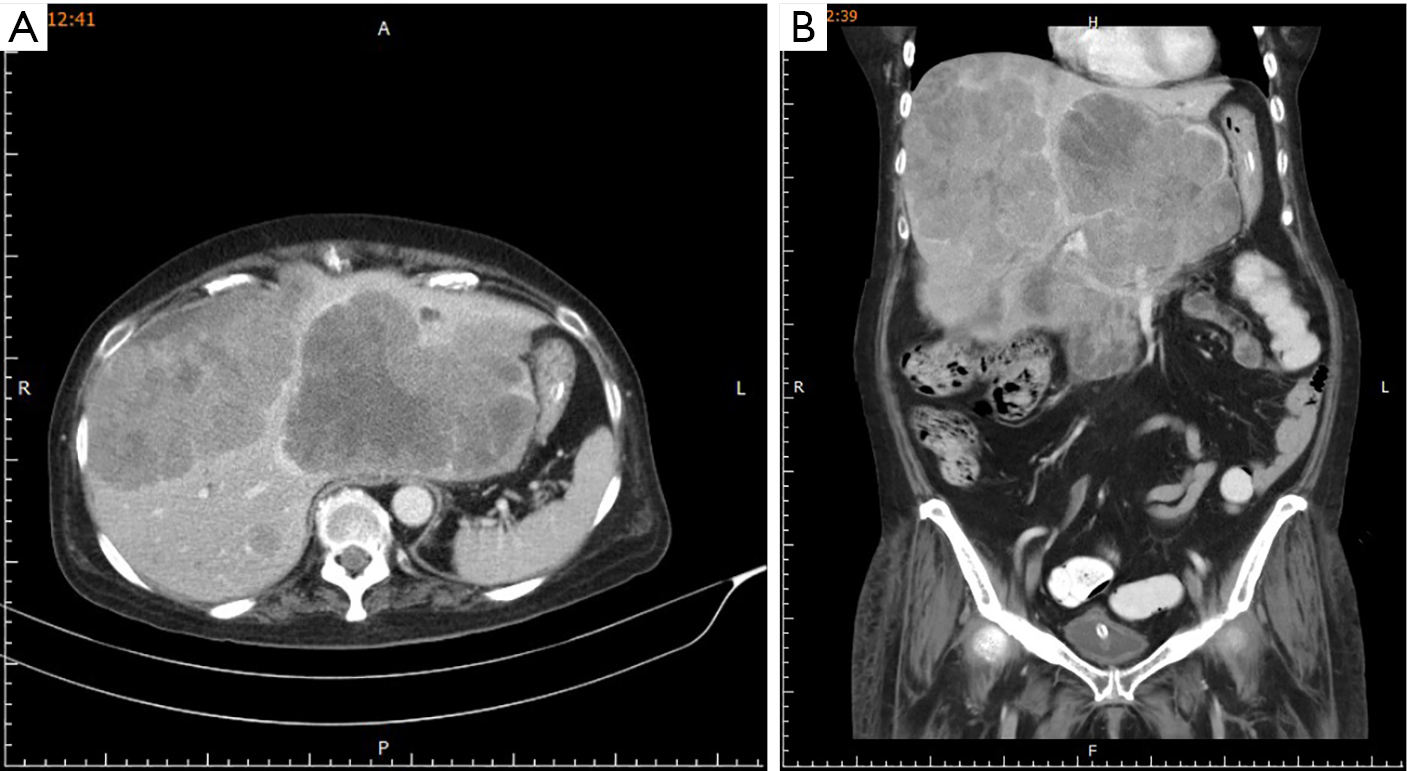 Figure 8 Contrast-enhanced CT scan of the abdomen 2 months after completion of brain irradiation. (A) Axial and (B) coronal views revealing disease progression with considerable enlargement of lesions as well as an increased number in the liver. 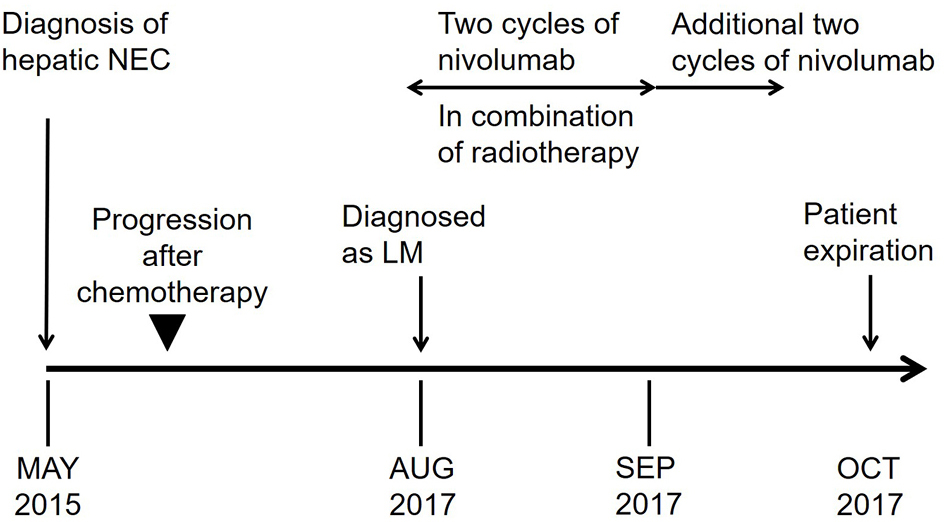 Figure 9 Disease course and treatment timeline of the patient.

NETs are rare and can originate in neuroendocrine cells throughout the body. According to the Surveillance, Epidemiology, and End Result (SEER) program database, in the United States, the annual incidence of NETs originating in the lung is approximately 1.49 per 100,000, that of NETs originating at gastroenteropancreatic sites is 3.56 per 100,000, and that of NETs originating at unknown primary sites is 0.84 per 100,000. In 2017, the World Health Organization defined three NET categories based on histology: well-differentiated, low-grade NETs (G1); intermediate-grade NETs (G2); and poorly differentiated, high grade NECs. The tumors are staged according to the American Joint Committee on Cancer tumor–node–metastasis system but vary for different primary locations. However, no staging system has been established specifically for primary hepatic NETs because of their rarity. Poorly differentiated NEC is often associated with an aggressive clinical course. A study analyzing the SEER database indicated that the median survival times of patients with lung NEC, gastrointestinal NEC, and unknown primary NEC were 7.6, 7.5, and 2.5 months, respectively (1). Another study on patients with NEC revealed that metastases were found in 20.8% of the patients at presentation and in an additional 38% of the patients after the initial diagnosis (2). Because most NEC tumors are locally advanced or metastatic at presentation, surgery alone is rarely curative; combined modalities are typically recommended to address the disease’s rapid progression. Radiotherapy is safe and effective for achieving local control, particularly for surgically unresectable tumors. A retrospective study examined 36 patients with pancreatic NETs who received radiotherapy for primary tumors or symptomatic metastases (3); the overall response rate to radiotherapy was 39% (13% complete response, 26% partial response, 56% stable disease, and 4% progressive disease). Platinum-based chemotherapy is an acceptable alternative for NEC treatment, with a reported response rate of 42–67% and a response duration of 8–9 months (4,5); however, salvage chemotherapy generally exhibits limited treatment effects. The anti-CTLA-4 and anti-PD-1 checkpoint inhibitors for immunotherapy considerably prolong survival in patients with solid tumors, including lung cancer, kidney cancer, and malignant melanoma. For NETs, only NEC of the skin (Merkel cell carcinoma) responds to immunotherapy. Moreover, data in the literature regarding response to immunotherapy remain scant, with marginal benefits observed in patients with NETs located elsewhere; the best response (i.e., stable disease) was observed for a patient with pancreatic NEC (6).

LM, exhibiting a different anatomy from that of brain metastases, rarely occur in patients with NEC. Although identification of cancer cells in CSF is considered the standard diagnostic test, this invasive procedure still has a high false negative rate. Nevertheless, with improved visualization of the subarachnoid space and improved sensitivity of high-field MRI, this procedure is currently used routinely for diagnosis (9). In terms of the well-documented dismal outcome of LM, a study reported that whole-brain radiotherapy concurrent with immunotherapy resulted in a favorable response in patients with melanoma LM, although the study was limited by its limited case number (10). A recent retrospective study (11) evaluated patients with melanoma and brain metastases who received radiotherapy, immunotherapy, or both after resection. Patients who received both immunotherapy and radiotherapy had superior survival rates than did those who received radiotherapy alone; moreover, patients who received radiotherapy followed by immunotherapy exhibited superior survival rates than did those who received immunotherapy followed by radiotherapy. However, previous studies have not reported LM from NEC or treatment recommendations. Our case study demonstrated a complete radiological and clinical remission when combined therapies were adopted, accompanied by minimal side effects compared with those of conventional intrathecal or high-dose chemotherapy.

Despite the powerful synergistic effects observed for combined treatment involving immunotherapy and radiotherapy, our patient’s primary hepatic tumors had progressed during immunotherapy, which ultimately contributed to her death. The abscopal effect, first mentioned in1953, describes radiotherapy-induced immune-mediated tumor regression at sites out of the radiation field. This effect has been reported in melanoma, kidney cancer, breast cancer, and other metastatic disease. However, the abscopal effect is rare, and only 46 case reports have documented this phenomenon between 1969 and 2014 (12). Questions remain regarding the rate of the abscopal effect and optimization of the abscopal response, including sequence of combined therapies, immunotherapeutic agents, radiation dose, and fraction size for different situations and cancer types. The blood–brain barrier may also limit immunological effects beyond the brain. Considering the lack of reliable data regarding the immunology and advantages of combined therapy in treating NEC, further research is warranted to validate our findings.

Reporting Checklist: The authors have completed the CARE reporting checklist. Available at http://dx.doi.org/10.21037/tro-19-103

Conflicts of Interest: All authors have completed the ICMJE uniform disclosure form (available at http://dx.doi.org/10.21037/tro-19-103). JFC serves as an unpaid editorial board member of Therapeutic Radiology and Oncology. The other authors have no conflicts of interest to declare.

Ethical Statement: The authors are accountable for all aspects of the work in ensuring that questions related to the accuracy or integrity of any part of the work are appropriately investigated and resolved. All procedures performed in studies involving human participants were in accordance with the ethical standards of the institutional and/or national research committee(s) and with the Helsinki Declaration (as revised in 2013). The consent was waived for this study by the IRB committee at the Taipei Medical University Hospital since the patient died. The study was approved by Taipei Medical University-Joint Institutional Review Board (N201710026).