WBRT plays an important role in tumor control for patients with multiple brain tumors and thus lower the subsequent neurological death. WBRT is also used in prophylactic cranial irradiation for patients with small cell lung carcinoma (5-7). Although WBRT was proven to be effective in eliminating brain tumors, damage to normal brain tissue is inevitable, and several complications have been observed following treatment that decreases the quality of life of patients (8). Previous studies showed that poor neurocognitive function may occur months after radiotherapy due to radiation-induced hippocampal damage. The radiation-induced hippocampal damage causes a decline in neurocognitive function, including deficiencies in learning, memory and spatial management, which can be observed in patients. The clinical symptoms of radiation-induced hippocampal damage include memory loss, lack of concentration, and emotional disorders (9,10).

The findings of radiation therapy oncology group (RTOG) 0933 trial suggest that hippocampal avoidance during WBRT (HA-WBRT) could reduce radiation-induced neurocognitive toxicities (11). The purpose of HA-WBRT is to generate hippocampal avoidance regions while allowing the sufficient prescribed dose (PD) to cover the remainder of the brain. HA-WBRT can significantly reduce the hippocampal dose. Although the risk of developing subsequent brain metastasis after HA-WBRT is unknown, Ghia et al. (12) reported that of 272 cases with brain metastases, the incidence of metastases within 5 mm of the perihippocampal region was low (3.3%). Thus, their results indicated that a 5-mm margin around the hippocampus for HA-WBRT was an acceptable risk. With advances in radiotherapy, several reports have discussed the application of intensity-modulated radiotherapy (IMRT) and volumetric-modulated arc therapy (VMAT) for HA-WBRT and attempted to minimize WBRT-induced neurocognitive toxicities. Nevelsky et al. (13) evaluated the feasibility of the RTOG 0933 trial using the Elekta Infinity (Elekta AB, Stockholm, Sweden) equipped with Monaco 3.1 (Elekta AB, Stockholm, Sweden) treatment planning system (TPS) to perform IMRT with seven coplanar plus two non-coplanar beams. VMAT, with continuous gantry rotation and leaf motion with a varying dose rate, can increase treatment efficiency and reduce the amount of patient motion during the treatment (14). Therefore, the purpose of this study is to compare the non-coplanar and coplanar VMAT for HA-WBRT using the Elekta Synergy (Elekta AB) and Pinnacle (Philips Medical System, Fitchburg, WI, USA) TPS according to the suggested criteria of the RTOG 0933 trial. We also performed VMAT quality assurance (QA) for each treatment plan to evaluate the feasibility of HA-WBRT with different VMAT techniques.

We present the following article in accordance with the MDAR reporting checklist (available at http://dx.doi.org/10.21037/tro-20-50).

The study was approved by the Taipei Medical University Joint Institutional Review Board, and the IRB number is TMU-JIRB No. N201711047. Nine patients with brain metastases outside 5 mm of the hippocampus who underwent WBRT were selected for this retrospective study. Computed tomography (CT) and magnetic resonance (MR) images were used for each patient to delineate the hippocampus, hippocampal avoidance regions (defined as the hippocampus with an expansion of 5-mm margin) according to the RTOG 0933 trial, optic nerves, optic chiasm, and lens. CT images (3 mm slice thickness) for treatment planning were generated using a Phillips 16 slice CT scanner (Brilliance CT Big Bore). All 6-MV VMAT plans were optimized with Pinnacle3 Version 14 for Elekta Synergy with 40 multileaf collimator (MLC) leaf pairs (MLCi) of 1 cm leaf width at isocenter.

The study was conducted in accordance with the Declaration of Helsinki (as revised in 2013). The study was approved by the Taipei Medical University Joint Institutional Review Board (TMU-JIRB No. N201711047), and informed consent was taken from all the patients. 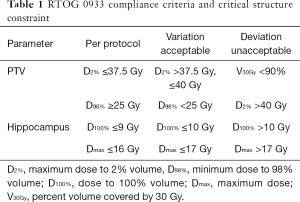 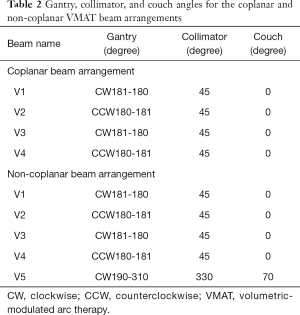 where Dmedian is the median dose of the PTV.

The beam-on time was defined as the treatment time excluding the time for patient setup and couch rotation. The beam-on times for different VMAT plans were reported and evaluated. The VMAT QA procedures were completed for each plan and performed by measuring the dose distribution using the PTV 2D-array seven29 with a plane matrix of 27×27 air-filled ion chambers (17).

The Wilcoxon signed-rank test was used for statistical analysis among different VMAT techniques. A P value of ≤0.05 was considered statistically significant.

In all treatment plans, the dose constraints for the hippocampus according to the RTOG 0933 trial were prioritized while limiting the dose to the lens. Figure 1 shows the isodose lines (ranging from 1,500 to 3,400 cGy) around the hippocampus of the non-coplanar and coplanar VMAT plans on axial, coronal, and sagittal images from one case of this study. The average DVHs of the hippocampus, lens and PTV for the non-coplanar and coplanar VMAT plans for nine patients are shown in Figure 2. 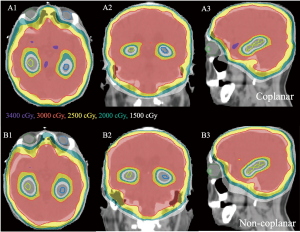 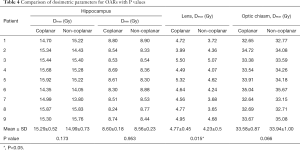 The beam-on time and VMAT QA results for nine patients are shown in Table 6. There was no significant difference (P>0.05) in the beam-on time between the non-coplanar (average, 6.2±1.3 min) and coplanar VMAT plans (average, 5.6±0.5 min). The results of the VMAT QA are shown in Figure 3. The average gamma passing rates for the non-coplanar and coplanar VMAT QA with criteria of 3%/3 mm were 95.4%±2.6% and 95.6%±1.6%, respectively, which indicated good agreement between the calculated plan dose and the measured dose. 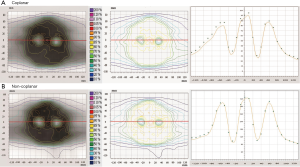 Nevelsky et al. (13) evaluated the feasibility of the RTOG 0933 trial using the Elekta Infinity to perform IMRT with seven coplanar plus two non-coplanar beams. We hypothesized that VMAT could achieve the same results. In this study, we performed HA-WBRT using non-coplanar and coplanar VMAT with Elekta Synergy. Our results showed that for all VMAT plans, the hippocampal dose can achieve the suggested criteria of the RTOG 0933 trial, with Dmax of the PTV (PTV Dmax) lower than 37.5 Gy, while maintaining the PTV coverage (at least 90% of the PTV by the PD).

Gondi et al. (18) proposed 9-beam non-planar IMRT with nine different couch angles for HA-WBRT, and their results showed that the average Dmax of the hippocampus was 15.3 Gy, and the average HI was 0.3. Our non-coplanar VMAT plans showed better average Dmax and HI values than those of Gondi et al. (18), and the shorter treatment time for the non-coplanar VMAT of this study can be expected due to less couch angle adjustment (0° and 70°).

Krayenbuehl et al. (19) evaluated the feasibility of HA-WBRT according to the RTOG 0933 trial using an automated TPS with VMAT of two FAs and two non-coplanar PAs. Their results showed that for 10 patients, the average Dmax and minimum dose (Dmin) of the hippocampus were 14.1 Gy (range, 12–15.3 Gy) and 8.1 Gy (range, 7.8–8.5 Gy), respectively; the average PTV V30Gy and PTV Dmax were 92% and 36 Gy (range, 35.1–36.5 Gy), respectively. In this study, we used the same TPS as the study performed by Krayenbuehl et al. (19), and our results for the non-coplanar VMAT plans showed that the average Dmax and Dmin of the hippocampus were 14.9 Gy (range, 13.8–15.8 Gy) and 8.5 Gy (range, 8.3–8.8 Gy). For the PTV, Krayenbuehl et al. (19) aimed to reduce the high dose in the normal brain (i.e., PTV D2%), and the average PTV D2% of their study was 33.5 Gy. In our study, the average PTV D2% was 33.4 Gy. Although our study showed a higher average PTV coverage (92.9%) than that reported by Krayenbuehl et al. (19) (92.0%), the Dmax and Dmin of the hippocampus in our study were both higher than their results but still met the criteria of the RTOG 0933 trial. Therefore, our results indicated that this study could reduce the high dose in the brain while maintaining PTV coverage. As for the better Dmax and Dmin of the hippocampus in the study of Krayenbuehl et al. (19), we believe that this can be explained by the usage of a Trilogy linac (Varian Medical System, Palo Alto, CA, USA) with 60 MLC pairs of 0.5 cm leaf width at isocenter. The narrower MLCs of the Trilogy compared with the MLCs of the Elekta Synergy used in this study can affect the treatment plan quality, since the width of the MLC would affect the spatial resolution of the dose distribution, and the penumbra width of the MLC could determine the dose fall-off in the hippocampal avoidance regions (20).

In the study performed by Wang et al. (21) using coplanar VMAT with two FAs, the average PTV D2% and PTV D98% were 35.1 and 26.6 Gy, respectively, and the Dmax and Dmin of the hippocampus were 16 and 9.3 Gy, respectively. In this study, four FAs were used for the coplanar VMAT, which allowed us to achieve better PTV D2%, PTV D98%, and Dmax and Dmin values of the hippocampus than those reported by Wang et al. (21). Based on the results, we speculate that increasing the arc number of VMAT could be used to easily achieve the dose constraints of the RTOG 0933 trial but would increase the treatment time as well. The dosimetric comparison data from the studies mentioned above and our study are summarized in Table 7.

For Dmax and Dmin of the hippocampus, our results indicated that no significant differences were observed between the non-coplanar and coplanar VMAT plans. For Dmax of the lens, the non-coplanar VMAT plans showed a significantly lower value than the coplanar VMAT plans. Previously reported of radiation-induced lens change in animal and human radiation cataract in radiation workers, exposure of the lens to ionizing radiation can result in opacification (22). Nguyen et al. (23) proposed a mean lens dose threshold of 7 Gy, and they reported that the cataract risk can be reduced to less than 25%. In addition, the National Council on Radiation Protection and Measurements No. 26 report suggests that it is more advantageous to keep the lens doses as low as possible according to the as low as reasonably achievable principle (24).

Because VMAT involves continuous gantry rotation and leaf motion with a varying dose rate, it is important to verify the consistency of the TPS and beam delivery. In this study, we performed VMAT QA for each treatment plan to evaluate the feasibility of HA-WBRT. On average, the gamma passing rate with criteria of 3%/3 mm was above 90%, within the action level of 90% recommended by the AAPM Task Group 119 report (25). The profile shown in Figure 3 demonstrates that for the hippocampus, the measured dose distribution was in good agreement with the calculated plan dose distribution.

Funding: The authors disclosed receipt of the following financial support for the research and publication of this article: this work was supported by Taipei Medical University - Shuang-Ho Hospital (grant number: 107HCP-11).

Reporting Checklist: The authors have completed the MDAR reporting checklist. Available at http://dx.doi.org/10.21037/tro-20-50

Conflicts of Interest: All authors have completed the ICMJE uniform disclosure form (available at http://dx.doi.org/10.21037/tro-20-50). All authors report grants from Taipei Medical University - Shuang-Ho Hospital, outside the submitted work.

Ethical Statement: The authors are accountable for all aspects of the work in ensuring that questions related to the accuracy or integrity of any part of the work are appropriately investigated and resolved. The study was conducted in accordance with the Declaration of Helsinki (as revised in 2013). The study was approved by the Taipei Medical University Joint Institutional Review Board (TMU-JIRB No. N201711047), and informed consent was taken from all the patients