Durable complete regression of laryngeal cancer with pre-epiglottic space invasion after radiochemotherapy and the incidental use of ACE-inhibitor: case report

In a report of 102 patients with of laryngeal cancer (LCA), the incidence of pre-epiglottic space invasion (PESI) was 27% (1). Carcinoma of the larynx with PESI has been associated with a 50% risk of cervical lymph node metastasis in preoperatively staged T1–T2 lesions (2), and a 25% hazard of base of tongue neoplastic involvement (3). With these facts, LCA-PESI has been designated as stage III T3 tumors according to the American Joint Committee on Cancer staging system (4). Surgical treatment has been proposed for T3–T4 supraglottic LCA with PESI (5) because better cure rates have been observed after definitive surgery than with radiotherapy (6). This unfavorable result associated with irradiation was attributed to the radioresistant nature of the neoplasm given the hypoxic milieu of the poorly vascularized pre-epiglottic space region of the head and neck (1). The 5-year survival rates after laryngectomy was 63% in patients without histologically detected PESI and 23% when PESI pathology was demonstrated (1).

Aside from the benefits of enhanced left ventricular function and reduced blood pressure, there is growing evidence that anti-hypertension medications (AHMs) [i.e., angiotensin-I converting enzyme inhibitor (ACEI)] also exhibit anticancer activity. To date, there is a paucity of information about the long-term effects of radiochemotherapy for locally advanced head and neck cancer (HNC) in patients who are also treated for hypertension (HPN) with the ACEI drug. This report describes the case of sustained complete response of LCA-PESI after the application of conventional non-operative combined therapy with the incidental use of ACEI. We present the following case in accordance with the CARE reporting checklist (available at http://dx.doi.org/10.21037/tro-20-26).

A 63-year-old woman was diagnosed with stage IVA T4aN2bM0 squamous cell carcinoma of the larynx in May 2007. Her presenting symptoms were hoarseness, neck pain and left-sided otalgia. On physical examination, a large epiglottic mass which extended to the left false vocal cord and fixation of the left true cord were noted. The neck was free of palpable lymph nodes. Her medical history was significant for HPN which necessitated the daily intake of lisinopril (an ACEI medication); lisinopril daily intake was 5 mg. Computed tomography (CT) showed the supraglottic tumor extending to PES and the base of the tongue. Positron emission tomography (PET)-CT revealed abnormal lymphadenopathies in the left side of the neck. Because of patient preference, the applied treatment was concurrent radiochemotherapy. Cisplatin (100 mg/m2/day) chemotherapy was given as a rapid intravenous drip infusion on days 1, 22 and 43 and was repeated for three cycles. With fractionated external beam megavoltage (6 MV) radiotherapy, the total applied doses to primary tumor/upper neck and lower neck were 68.4 and 50 Gy respectively. Transient grade 2 or 3 mucous membrane toxicity occurred during the irradiation course. Comparison of the PET-CT images of June 2007 to December 2007 (Figure 1) showed total resolution of the locally advanced head and neck malignancy. At last follow-up in February 2019 (142 months after diagnosis and treatment) which included endoscopy, the patient was declared to be in complete HNC remission. There was no recorded instance of significant complications (i.e., osteoradionecrosis or esophageal stricture) after therapy. 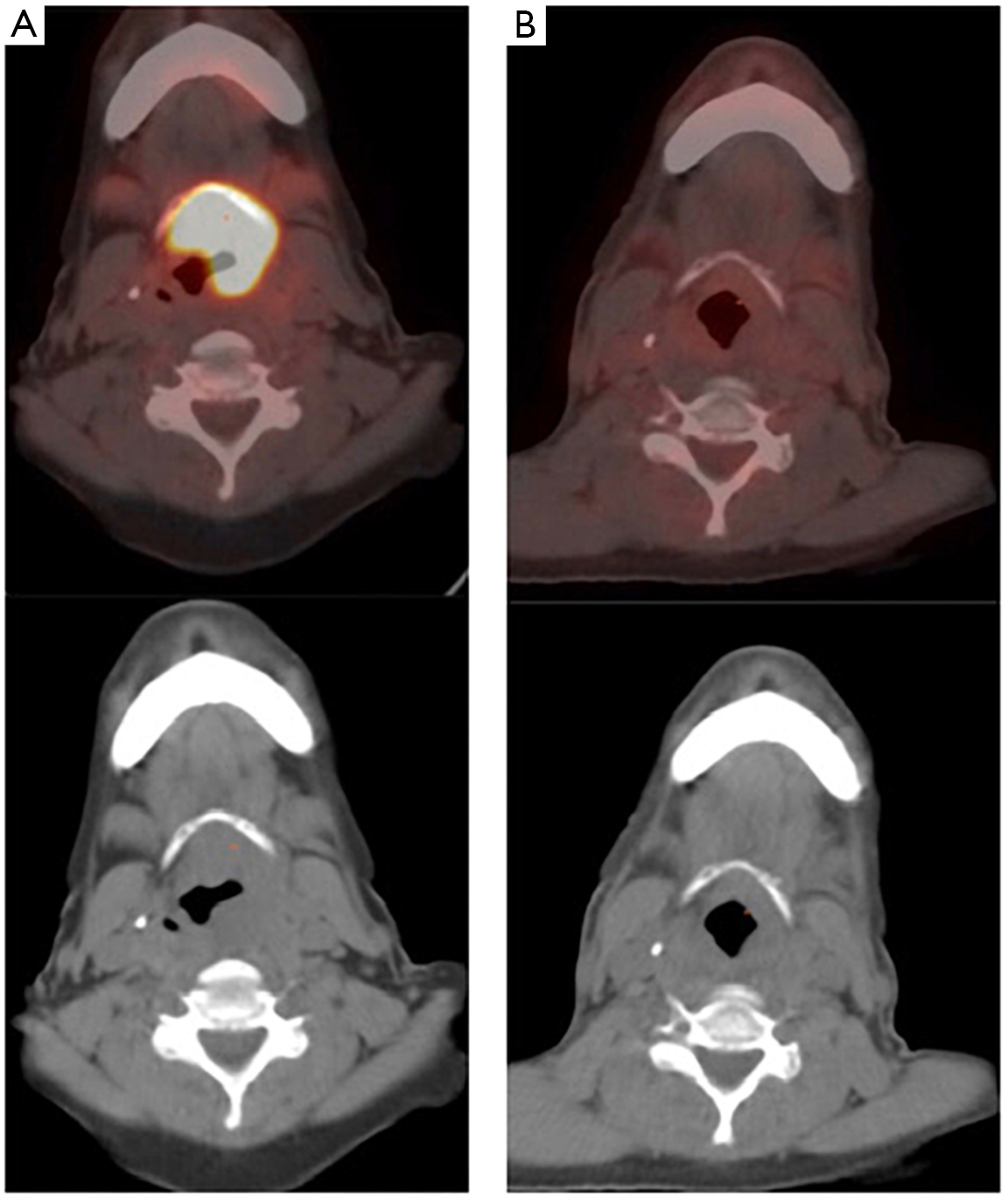 Figure 1 The complete response of LALC with PESI after contemporary radiochemotherapy and the incidental use of AHM is shown in PET-CT images (A) before and (B) after treatment. LALC, locally advanced laryngeal cancer; PESI, pre-epiglottic space invasion; AHM, anti-hypertension medication; PET, positron emission tomography; CT, computed tomography.

All procedures performed in studies involving human participants were in accordance with the ethical standards of the institutional and/or national research committee(s) and with the Helsinki Declaration (as revised in 2013). Written informed consent was not obtained from the patient because anonymized, de-identified information was used for the report.

In a population-based clinical investigation of 15,582 individuals with cancer, HPN afflicted approximately 50% of the study participants (7). Therapeutic strategies in the management of cancer usually involve surgical ablation, radiotherapy and chemotherapy (8). Apart from conventional chemotherapy, another therapy has targeted the tumor vasculature by vascular disrupting agents or inhibitors of angiogenesis. Studies have shown that the renin-angiotensin system (RAS) may contribute in the paracrine regulation of tumorigenesis. Formation of neovascularization and cell replication, requirements for tumor growth, are mediated by angiotensin II (ANG II); ANG II, the main effector of the RAS, is an octapeptide cleaved from angiotensin I by the angiotensin I-converting enzyme (ACE) (9). Thus, the preceding considerations are believed responsible for ACEIs purported anti-neoplastic effects.

Prior experimental evidence has shown that: (I) propranolol, an AHM, exerts a synergistic effect when used with cisplatin, and decreases the viability of head and neck squamous cell cancer cells when applied with irradiation (10); and (II) ACEI does not have a direct cytotoxic effect on tumor cells, but has the potential to inhibit tumor growth through suppression of vascular endothelial growth factor-induced angiogenesis (11). Published reports (7,12-16), focused on the impact of ACEI use on the reduced risk of cancer recurrence and improvement of prognosis, have mostly described such effects in patients with cancer of the breast, lung, liver, pancreas and kidney.

Cancer in the head and neck region is a heterogeneous disease. The clinical course of advanced stage malignancy including response to treatment is undoubtedly not uniform in all of the treated patients. To the best of our knowledge, this is the first report of durable total regression of LCA-PESI associated with conventional radiochemotherapy and the incidental use of ACEI lasting more than 10 years. The prolonged resolution of tumor from such treatment is in line with previously reported favorable results (of complete tumor responses and better survival) seen among AHM users versus non-AHM users with breast or non-small cell lung cancers (14,15,17). Other accounts of AHM use in people with cancer have displayed survival estimates with periods lasting more than 100 months (12,14). In summary, the presented case underscores the importance of documenting accounts of successful, sustained favorable effects achieved through novel modes of therapy. Our positive result notwithstanding, we recognize that it is inappropriate to judge treatment efficacy from a retrospective standpoint and based on a single case. Given these shortcomings, this report should be considered as hypothesis generating. Further prospective studies of the required use of AHM combined with contemporary therapeutic interventions for these select patients with extensive HNC are eagerly awaited.

Reporting Checklist: The authors have completed the CARE reporting checklist. Available at http://dx.doi.org/10.21037/tro-20-26

Conflicts of Interest: All authors have completed the ICMJE uniform disclosure form (available at http://dx.doi.org/10.21037/tro-20-26). The authors have no conflicts of interest to declare.

Ethical Statement: The authors are accountable for all aspects of the work in ensuring that questions related to the accuracy or integrity of any part of the work are appropriately investigated and resolved. All procedures performed in studies involving human participants were in accordance with the ethical standards of the institutional and/or national research committee(s) and with the Helsinki Declaration (as revised in 2013). Written informed consent was not obtained from the patient because anonymized, de-identified information was used for the report.