Cancers of paranasal sinus are rare and comprise less than 1% of all cancers and about 3% to 5% of head and neck cancers (1). The maxillary sinus is the most prevalent cancer-arising site of primary paranasal sinuses.

Managing patients with maxillary sinus cancers remains a great challenge due to anatomical location in proximity to vital structures and significant diversity of histological types (2). More notably, maxillary sinus cancers are frequently locally advanced at presentation because they are usually asymptomatic for a long time. Even symptoms developed, early symptoms are similar to common nasal complaints that prevent from an alert for early diagnosis.

Because of its low prevalence, optimal treatment approach for locally advanced maxillary sinus carcinoma remains controversial. For patients with unresectable disease, definitive concurrent chemoradiotherapy (CCRT) may be a suitable treatment choice, demonstrating a 5-year overall survival rate of 59.2%, and disease-specific survival rate of 71.7% (3). According to extrapolations from results of a meta-analysis in patients with head and neck cancers (MACH-NC), when compared with RT alone, CCRT shows an absolute benefit of 6.5% on 5-year overall survival (4).

CCRT provides as a treatment choice for managing patients with maxillary sinus cancers, but the best irradiating dose remains unclear. Dose escalation of radiotherapy (RT) is a subject of debate due to concerns of dose-related toxicities and uncertain survival benefits of dose-intensified prescription. Seemly, homogenous dose escalation may not be an optional choice because of a high local failure rate of 69% and potential harms for surrounding normal tissues (5).

Recently, combined RT techniques of volumetric-modulated arc therapy (VMAT) and simultaneously integrated inner-escalated boost (SIEB) (6) have been reported to gain double benefits in irradiating bulky tumors. First, it escalates RT dose per faction over central tumor zone for massively damaging cancer cells. Second, it maintains or slightly decreases fraction size over the peri-tumor zone for keeping a low risk of RT-related toxicities. By using this technique, it is possible to prescribe doses of BED more than 100 Gy to bulky tumors without gaining severe toxicities. However, whether applying VMAT-SIEB RT is really benefited for patients with locoregionally advanced maxillary sinus cancers is largely unknown.

Herein, we presented a patient with locoregionally advanced maxillary sinus cancer. He refused radical surgery, and definitive CCRT with combined VMAT-SIEB technique was conducted. Good tumor control (i.e., late pathological complete response) with a cost of limited toxicities was observed. We present the following case in accordance with the CARE reporting checklist (available at http://dx.doi.org/10.21037/tro-19-46).

A 46-year-old man with history of hypertension and hepatitis B virus infection for several years came to our hospital due to left nasal obstruction with abnormal blood-ting secretion for months.

The physical examination showed hearing defect of left ear, nasal bleeding and post-nasal dripping on the admission day. On computed tomography (CT), enhanced masses were found in the left nasal cavity and left maxillary sinus with destruction of the anterior and medial wall of left maxillary sinus. The largest mass was 6.9 cm in diameter (Figure 1). Multiple enlarged lymph nodes (up to 1 cm in short axis) were observed over the left level II–III neck nodal basins. Biopsy was done, and histopathological examination showed squamous cell carcinoma of the left maxillary sinus, with tumor invasions to left nasal cavity and anterior orbital content, cT4aN2bM0, stage IVA (2015/11, AJCC 7e). After discussion with the patient and his families, definitive chemoradiotherapy (CCRT) was prescribed due to his refusal of surgery, which burdens a high risk of post-operation complications. 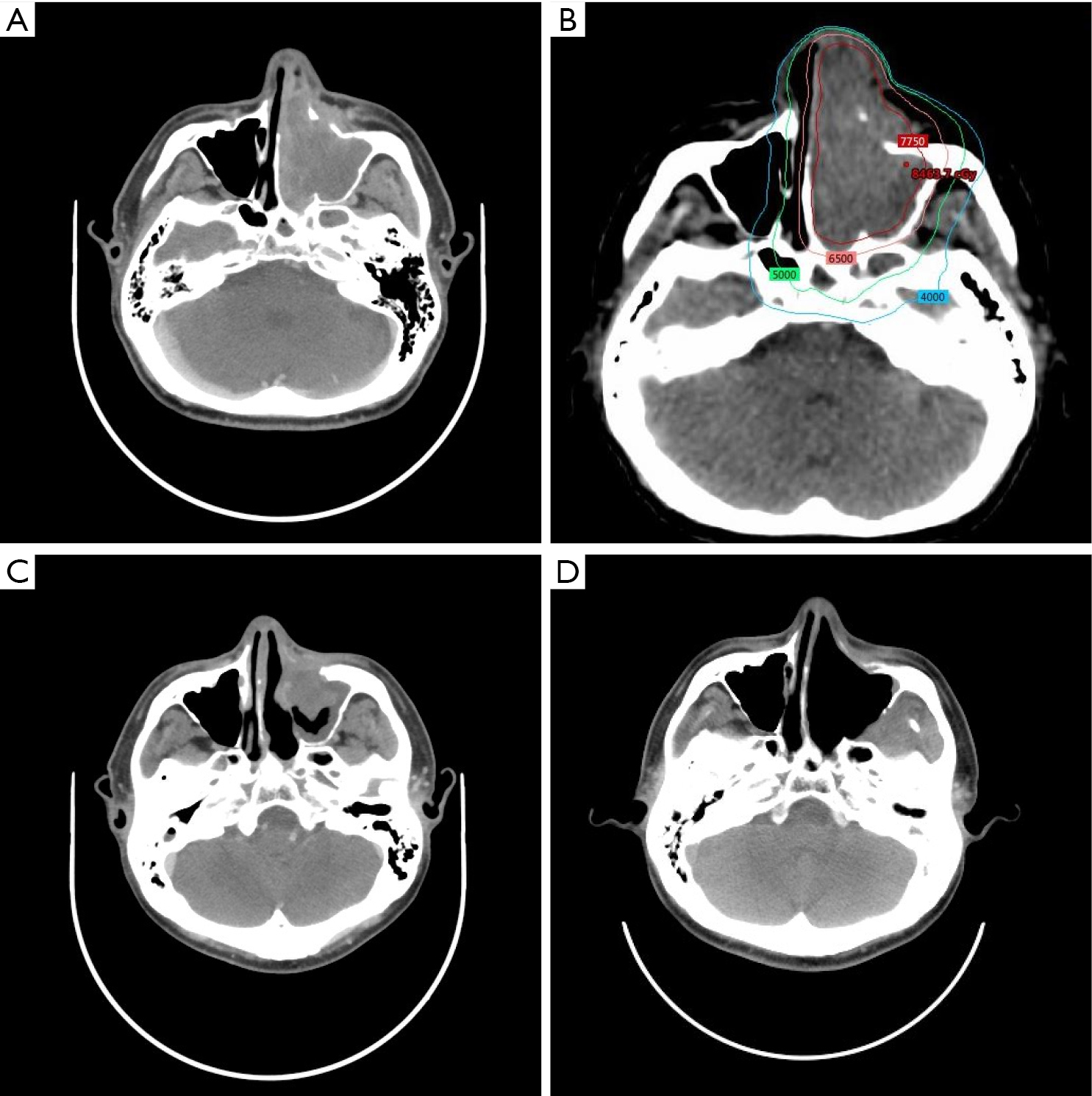 Figure 1 Sequence of CT image and dose distribution of treatment planning system. (A) The bulky tumor of the left maxillary sinus was measured about 6.9 cm in the largest diameter on CT image at the time of diagnosis. (B) RT with combined SIEB and VMAT technique was delivered with total doses of PTVtotal, CTVp, and GTVp were 50, 65, and 77.5 Gy in 25 fractions, generating a relatively protective low dose of 40 Gy at the peripheral zone of the PTVtotal. (C) The tumor showed significant regression but still residual tumor after one year of CCRT, being compatible with lasting partial response. (D) No residual tumor and recurrence were found after salvage surgery. CT, computed tomography; RT, radiotherapy; SIEB, simultaneously integrated inner escalated boost; VMAT, volumetric-modulated arc therapy; PTVtotal, total plan target volume; CTVp, primary clinical target volume; GTVp, primary gross target volume; CCRT, concurrent chemoradiotherapy.

The patient was fixed with U-frame mask in supine position. His arms and shoulders were pulled down and the hands were fixed in place under the buttocks. The CT-simulation (3 mm slice thickness) was performed with intravenous contrast.

Concurrent chemotherapy with two cycles of cisplatin (100 mg/m2, Q3W) and RT with VMAT-SIEB technique were given (Figure 1B). The primary gross target volume (GTVp) and the nodal gross target volume (GTVn) included the primary gross tumor and the gross lymph nodes, respectively. The primary clinical target volume (CTVp) contained GTVp with 3–5 mm margin, left frontal sinus, left ethmoid sinus, left maxillary sinus, and sphenoid sinus. The nodal clinical target volume (CTVn) had GTVn with 3–5 mm margin, ipsilateral level I–III. The total planning target volume (PTVtotal) were both CTVp and CTVn plus 3 mm margin for set-up error and intrafractional motion. PTVtotal, CTVp and GTVp were delivered with a dose gradient of 2, 3 and 3.5 Gy per fraction in the initial 5 fractions then shifted to 2, 2.5 and 3 Gy per fraction in the rest 20 fractions, respectively. Hence, by 25 fractions, total doses of PTVtotal, CTVp, and GTVp were 50, 65, and 77.5 Gy, respectively (Figure 2B). Additionally, in order to limit normal tissue toxicities, a relatively low dose of 40 Gy in 25 fractions (i.e., a fraction size of 1.6 Gy) was demarcated over the peripheral zone of the PTVtotal with 2 mm margin. No further boost was applied to the CTVn and GTVn. For having better accuracy, image guided RT was performed during the whole course of the treatment. KV cone beam computed tomography and KV 2-dimension images were performed once a week and the rest of the RT delivering day, respectively.

Figure 2 Post-salvage-surgery histopathological examination. (A) Nasal epithelium and necrotic materials (original magnification 20×20) are found. Only few inflammatory cells are observed in the necrotic materials. (B) Some viable tissue shows aggregates of foamy histiocytes and xanthogranuloma-like pattern (original magnification 20×20). All above histopathological slides show no evidence of residual cancer cells.

During and after RT, no severe toxicities (i.e., grade 3–4) were found. Only mild fatigue (grade 1) and moderate RT dermatitis (grade 2) were observed. One year after CCRT, the irradiated gross tumor showed significant tumor regression but still with residual tumor, being compatible with lasting partial response (Figure 1C). After re-discussion with the patient and his families, salvage surgery was done (Figure 1D), and histopathological examination confirmed pathologically complete response (Figure 2). No cancer recurrence and obviously late RT toxicity were identified till the last follow-up (i.e., 2 years after CCRT).

In the literature review, it is conflicting that RT dose escalation can improve local control and overall survival in cancers of the sinonasal cavity. Several studies have demonstrated no significant survival benefit of using dose-escalated regimens when compared with conventional dose fractionation (5,7-10). Moreover, two retrospective studies (5,10) showed RT with a total dose of more than 65 Gy demonstrates statistically significant worse overall and progress-free survival rates when compared with that of total dose below 65 Gy. However, on the contrary, Hoppe et al. gained reverse results (11). And this reverse effect was supported by another study showed that patients received RT dose of more than 60 Gy gains a clear benefit than that of those patients received dose of less than 60 Gy (12). These contradictory results may be related to that RT dose escalation may result in life-threatening radiation-related toxicities due to proximity of critical structures. For overcoming this constraint, in the present case, we conducted RT with combined irradiating techniques of VMAT and SIEB. 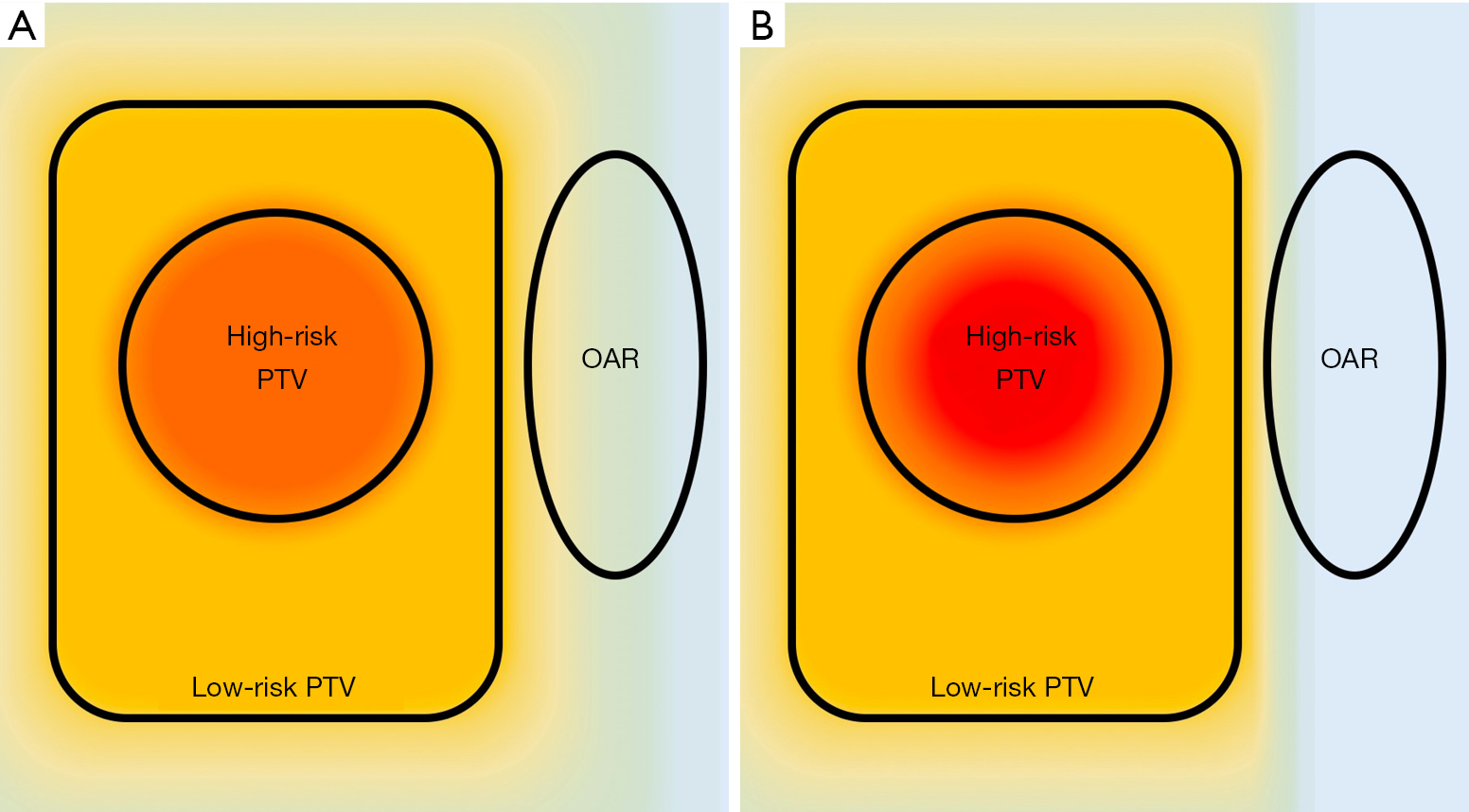 For more safely and effectively irradiating bulky tumors that are adjacent to critical normal organs, modified SIB (i.e., SIEB) technique is developed (6,16-19). SIEB not only non-homogenously escalates dose within the high-risk PTV (e.g., from 2.2 to 3 Gy per fraction) but also attenuates dose to the peripheral zone of PTV (e.g., 1.2–1.6 Gy per fraction) (6,16-19). The GTVp and CTVp are both defined as high-risk PTV. The delivered dose is non-homogenously escalated from PTV to CTVp to GTVp, while the attenuated area is deescalated from PTV. To the authors’ experience, GTVp, CTVp, PTV, and attenuated area (PTV with 1–2 mm margin) were usually irradiated with 150% to 160%, 120% to 130%, 100%, and 80% to 90% of prescribed dose, respectively. As a result, SIEB further gains double benefits of increasing tumor control with a cost of limited toxicities.

Hence, in the present case, we applied CCRT with combined VMAT-SIEB technique to this non-surgical patient. Total doses of 50, 65, and 77.5 Gy were delivered in 25 fractions to PTVtotal, CTVp, and GTVp (Figure 1B). Equivalent dose in 2 Gy fractions (EQD2) and biological equivalent dose (BED) of PTVtotal, CTVp, and GTVp were estimated as 50/60, 68.3/82, and 84.7/101.6 Gy, respectively. A protective low dose of 1.6 Gy per fraction was prescribed at the peripheral zone of the PTVtotal for preventing unpredictable high dose over the normal tissues (e.g., the brain stem). No sever acute or late radiation-related toxicities (i.e., grade 3–4) during the whole RT course and follow-up period. Surgical resection was done for salvaging the post-irradiating 1-year lasting residual tumor. Surprisingly, histopathological examination reported pathological complete response. The present case, in conjunction with the previously reported case (6), shed a light that combined RT techniques of VMAT and SIEB may be effectively to eradicate non-surgical bulky tumors that are adjacent to critical structures. Further prospective clinical trials are encouraged.

Definitive CCRT with combined VMAT and SIEB technique may be useful for managing locoregionally advanced maxillary sinus cancers with a cost of limited toxicities. However, there wasn’t enough evidence to prove the benefits of SIEB technique. Further prospective trials are encouraged to demarcate clinical effective size of this type of combined RT techniques.

Reporting Checklist: The authors have completed the CARE reporting checklist. Available at http://dx.doi.org/10.21037/tro-19-46

Conflicts of Interest: All authors have completed the ICMJE uniform disclosure form (available at http://dx.doi.org/10.21037/tro-19-46). SKH serves as an unpaid editorial board member of Therapeutic Radiology and Oncology from Apr 2020 to Mar 2022. The other authors have no other conflicts of interest to declare.

Ethical Statement: The authors are accountable for all aspects of the work in ensuring that questions related to the accuracy or integrity of any part of the work are appropriately investigated and resolved. Written informed consent was obtained from the patient for publication of this Case report and any accompanying images. A copy of the written consent is available for review by the Editor-in-Chief of this journal.