Krukenberg tumor (KT) is a rare metastatic ovarian tumor mostly originating from gastrointestinal (GI) malignancy (1), and accounts for 1–2% of all ovarian tumors (2). The diagnosis and origins of KT depends on histopathology and immunohistochemistry evaluation (IHC) (1). KT is typically characterized by mucin secreting signet ring cell adenocarcinoma lying in the fibroblastic stroma tissue of the ovary, and has been loosely applied to any metastatic tumor in the ovary (3). Patients with KT are often presented with non-specific symptoms of abdominal pain and distension, loss of appetite, and weight loss.

The overall survival of KT is worse than primary ovarian cancer with median survival less than 2 years, and significantly related to its origins (1,4). Although there is neither randomized trial nor standard treatment guidelines for KT, the mainstay of treatment consist of cytoreductive surgery (CRS), chemotherapy and radiotherapy (1,5). In most literature reviews, radiotherapy was recommended for palliative purpose. There is limited evidence of dose escalation recommendation on radiotherapy for more aggressive purpose. Therefore, we present a case report of 76-year-old female with unrespectable KT treated with dose escalation and altered fractionation radiotherapy.

A 76-year-old female was initially diagnosed with KRAS-mutated adenocarcinoma of the ascending colon. The patient subsequently received right hemicolectomy and incomplete adjuvant intravenous chemotherapy in December 2007. This time, the patient presented with enlarging lower abdominal mass and went to the gynecology department for assistance at the same hospital in April 2014. A contrast-enhanced computed tomography (CT) scan of the abdomen and pelvis identified a 12 cm × 8 cm × 7 cm contrast-enhanced mass at the pelvis (Figure 1). The patient underwent a planned exploratory laparotomy and debulking surgery, but only received core needle biopsy because of intra-abdominal adhesions and intraoperative bleeding. The histopathology revealed glandular pattern of dysplastic cells with hyperchromatic and pleomorphic nuclei and marked tumor necrosis. The IHC showed strong cytoplasmic staining for cytokeratin 20 (CK20), nuclear staining for caudal type homeobox 2 (CDX2) and positive for carcinoembryonic antigen (CEA); and negative for cytokeratin 7 (CK7), estrogen receptor (ER), paired box gene (PAX8), and Mucin 2 (MUC2). Based on the histopathological and IHC features, adenocarcinoma from colonic origin was the most likely diagnosis. Afterwards, the patient came to the medical oncology department at our hospital for second opinion. From June to November 2014, the patient received first-line chemotherapy comprising 5-fluorouracil (5-FU), leucovorin, and irinotecan (FOLFIRI regimen) combined with VEGF-targeted therapy (bevacizumab) for 6 cycles. The radiological assessment after first-line systemic treatment revealed progressive disease. The patient then received second-line chemotherapy consists of 5-FU, leucovorin, and oxaliplatin (FOLFOX regimen) for 6 cycles from February to April 2015. However, the radiological assessment after second-line chemotherapy still revealed progressive disease with tumor size increasing to 16 cm × 14 cm × 13 cm and right obstructive hydronephrosis (Figure 2). 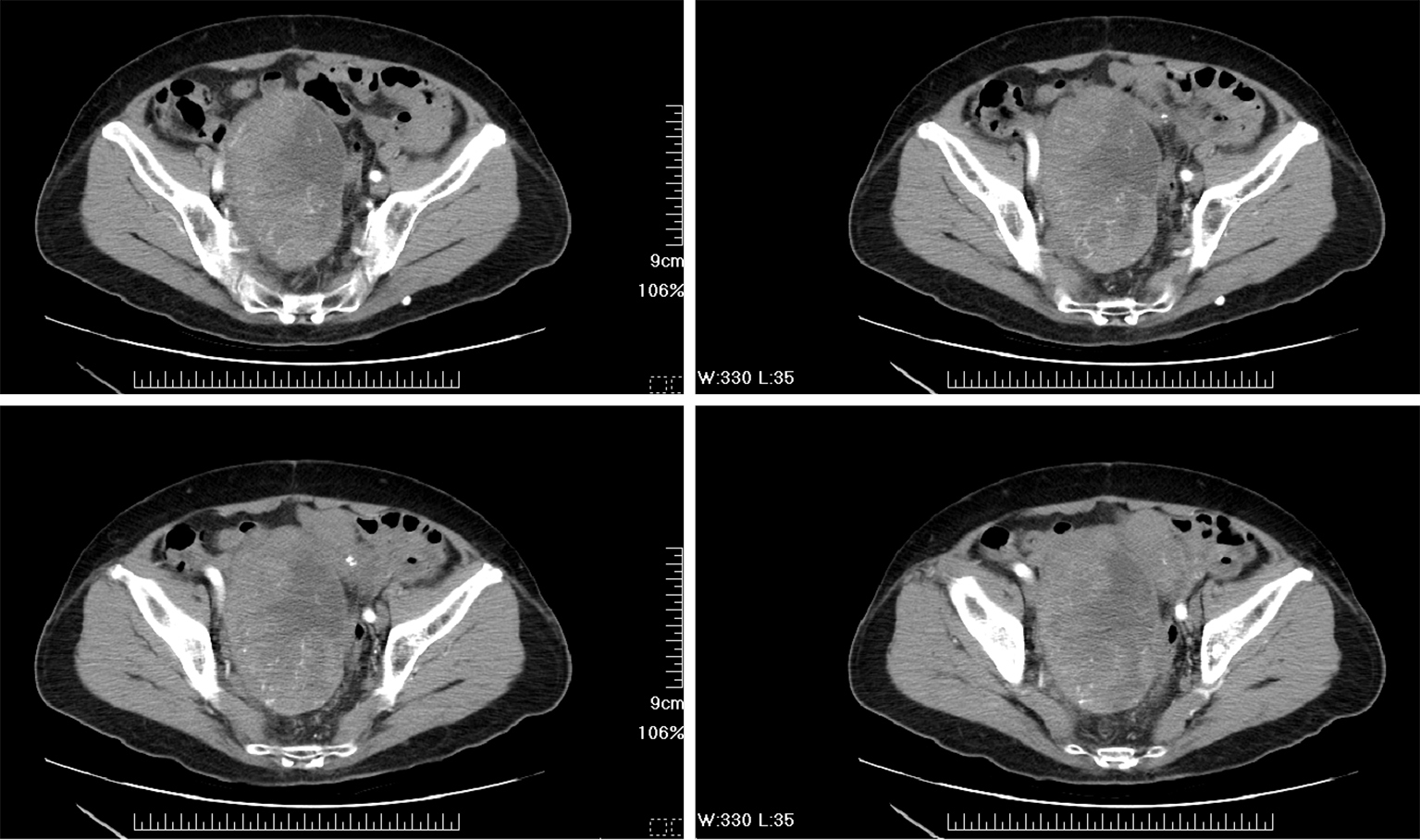 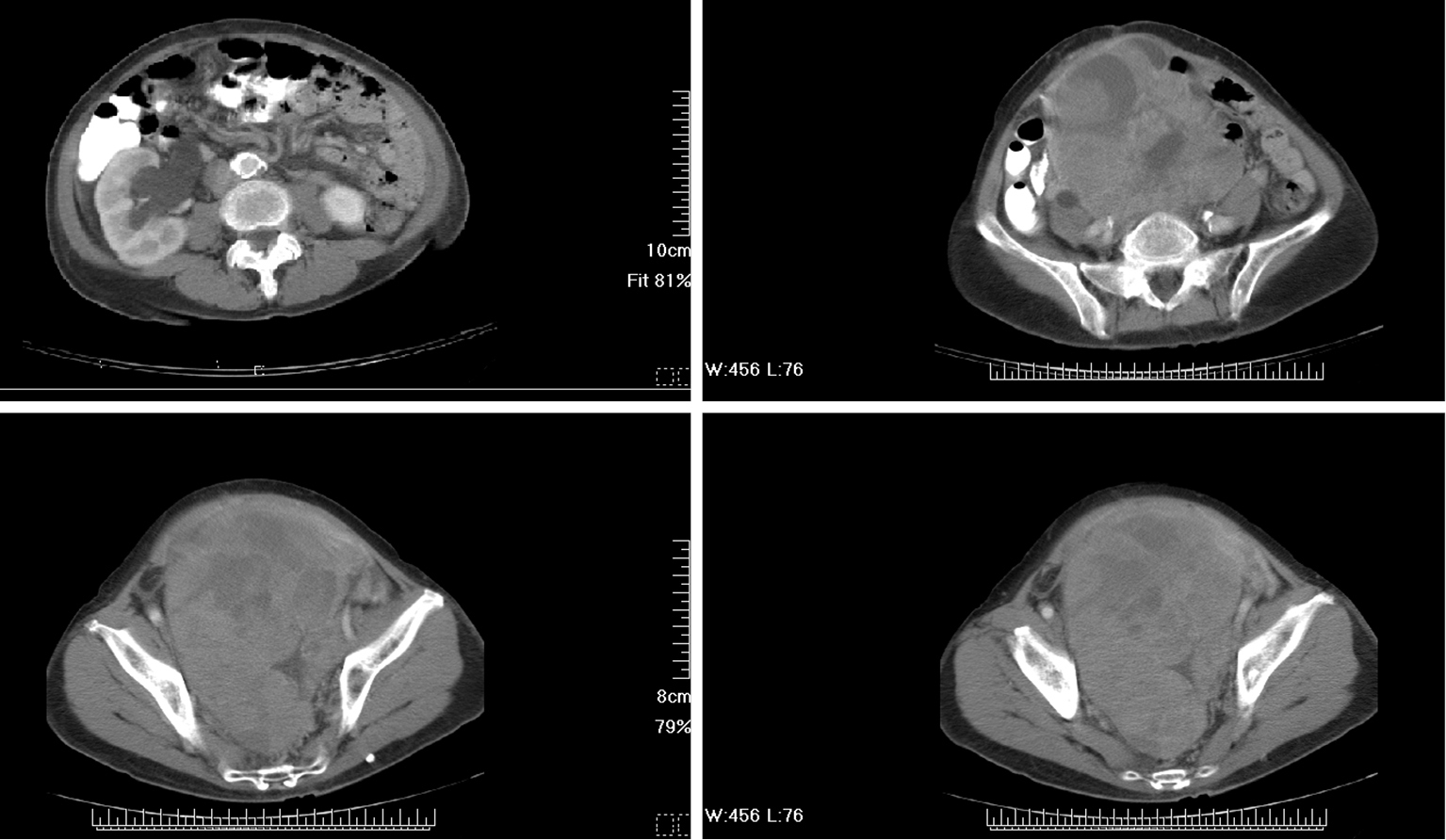 Because of poor response to systemic therapy, the patient was referred for radiotherapy. The patient was immobilized with a vacuum bag fixation, and underwent a contrast-enhanced CT scan for simulation. In our radiotherapy plan, the gross tumor volume boost (GTV-boost) was delineated according the fusion image of the tumor before chemotherapy and the solid part tumor after chemotherapy (Figure 3A). The GTV covered the cystic and solid part tumor after chemotherapy (Figure 3B). The planning target volume (PTV) and PTV-boost was defined as GTV and GTV-boost plus 5 mm margin, respectively. The prescribed dose was 2.5 Gy per fraction for the first 10 fractions to the GTV-boost followed by 2.3 Gy per fraction for 20 fractions to the GTV. The radiotherapy was given 5 days per week from November 2015 to January 2016. The dose constraints for organ at risk (OAR) were followed according to RTOG 0418 and RTOG 0937 protocol: the V40 (volume receiving at least 40 Gy) of intestine <30%, V30 of rectum <60%, V45 of bladder <35%, V30 of bilateral femoral head <15% and V18 of bilateral kidney <25%. The treatment was planned on the Eclipse Treatment Planning System, Version 13.0 and carried out by 6 MV photon, coplanar, and volumetric arc therapy using RapidArc® (Palo alto, CA, USA). The proportion of PTV-boost and PTV receiving 100% of the prescription dose were 94% and 92%, respectively (Figure 4A,B). The dose-volume histogram (DVH) for OAR was showed as bellowed (Figure 4C). 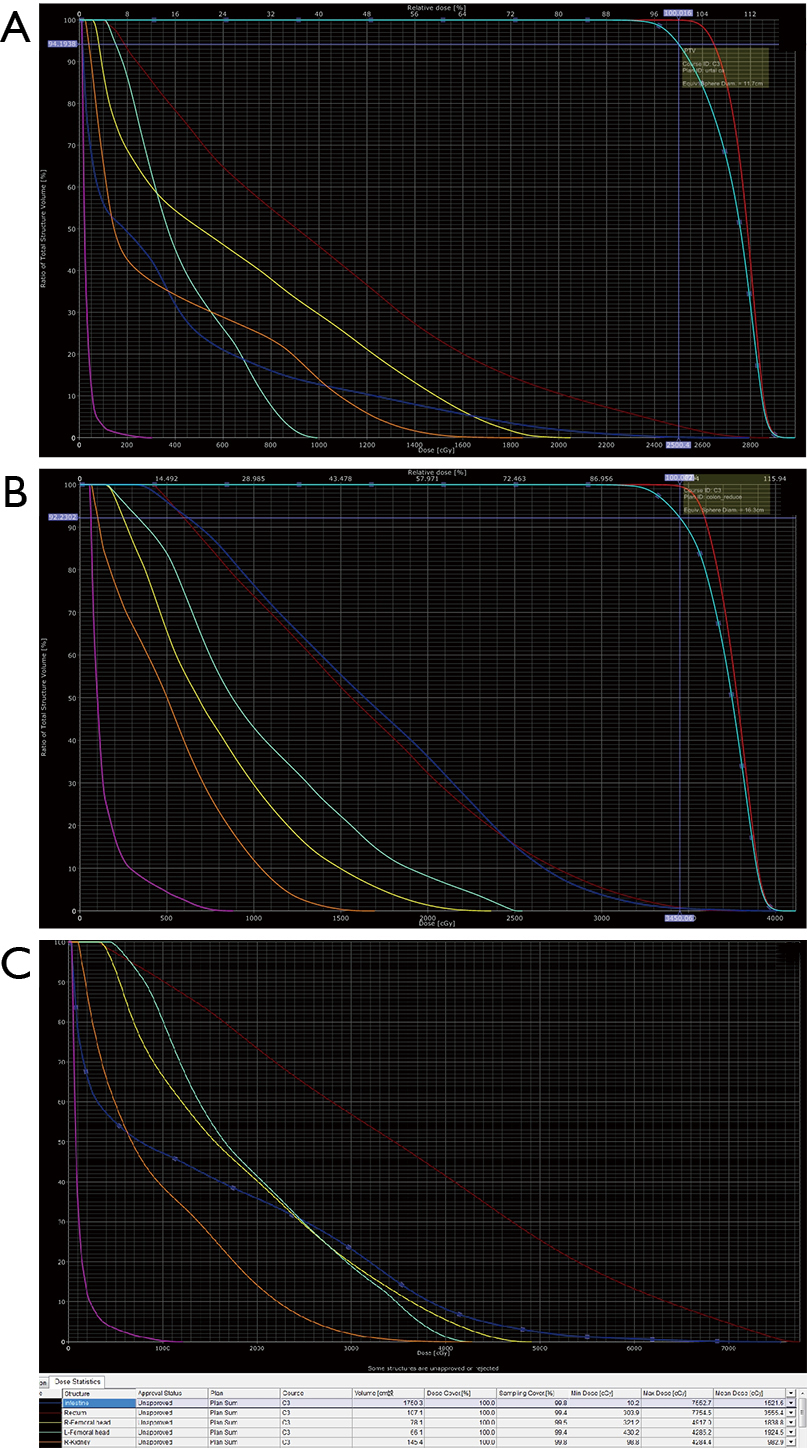 Figure 4 The cumulative DVH. The proportion of PTV-boost and PTV receiving 100% of the prescription dose were 94% (A) and 92% (B); (C) the summation DVH of OAR. DVH, dose-volume histogram; PTV, planning target volume; OAR, organ at risk.

The patient suffered from acute toxicity of grade 3 fatigue and diarrhea (according to Common Terminology Criteria for Adverse Events v3.0) after 25th fraction and had radiotherapy rest for 1 week. Additional CT simulation and re-planning was done for the last 5 fractions due to radiotherapy rest and obscured skin localization line. After radiotherapy, the patient refused further systemic treatment and received regular follow up at our radiation oncology department. The patient received positron emission tomography/computed tomography (PET/CT) scan in the first and second year after radiotherapy, which revealed partial response and free from disease progression (Figure 5A,B). By May 2018, the patient had survived for 4 years since diagnosed with KT, and had locally controlled disease for 2 years after radiotherapy. 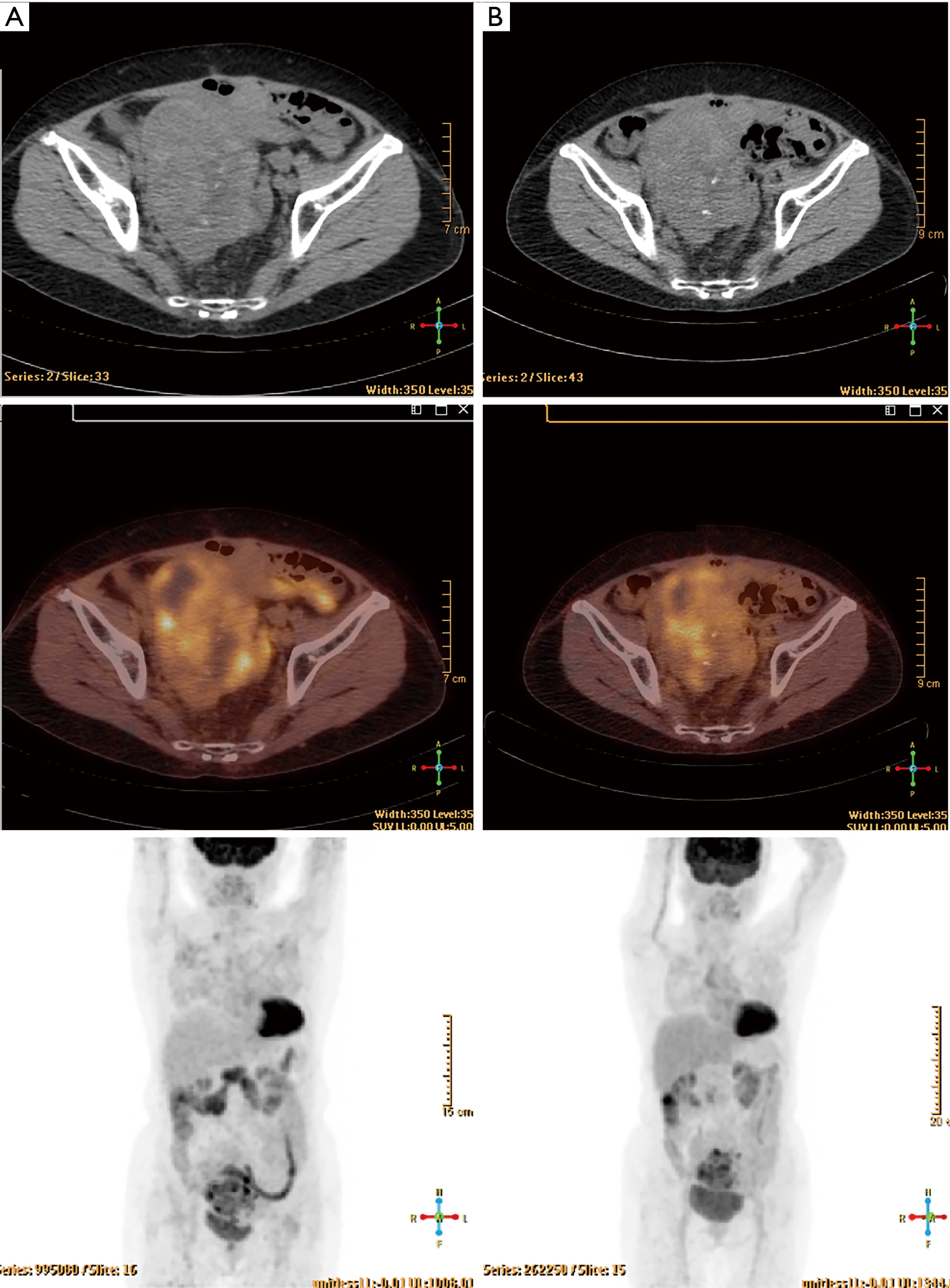 KT was first described and named after Friedrich Ernst Krukenberg, a German gynecologist and pathologist who described a new type of primary ovarian fibrosarcoma in 1896 (6); though, it was later redefined as the metastatic tumor from GI tract origin. KT is typically characterized by mucin secreting signet ring cell adenocarcinoma lying in the fibroblastic stroma tissue in of the ovary, and has been loosely applied to any metastatic tumor in the ovary (3). Patients with KT are often presented with non-specific symptoms of abdominal pain and distension, loss of appetite, and weight loss. Approximately 80% of KT involves bilateral ovaries at diagnosis, and the mean age of diagnosis is 45 years (1). It is reported that 10–25% of ovarian tumors are secondary tumors, in which typical KT only accounts for 30–40% (7). The most common primary origin of KT is reported to be GI malignancy, which accounts for 80% of cases (8). The differential diagnosis of ovarian masses is crucial and closely related to treatment strategies. IHC stain is an important tool to differentiate primary ovarian carcinoma from metastatic carcinoma. Most primary ovarian carcinomas are immunoreactive to CK7 and less reactive to CK20. By contrast, metastatic GI carcinoma is immunoreactive to CK20 and less reactive to CK7. Additional IHC test with CEA, CDX2, PAX8 and MUC2 can provide more information to differentiate origins of metastatic tumor (9-11). Therefore, this patient can be diagnosed as a KT from colorectal origin according to histopathology and IHC test, which is positive for CK20, CDX2 and CEA and negative for CK7, ER, PAX8, and MUC2.

Generally, the overall survival of KT is worse than primary ovarian cancer with median survival less than 2 years, and significantly related to its origins (1,4). Due to its rarity and poor prognosis, there is neither randomized trial nor standard treatment guidelines for KT. A large systematic review, which included 1,533 patients with KT, concludes available treatment alone or combination with CRS, chemotherapy, and hyperthermic intraperitoneal chemotherapy (HIPEC) (5). Most studies indicated that CRS proved survival benefit when compared to non-surgical treatments, of which CRS without gross residual demonstrated better outcomes (12-14). In regard to chemotherapy, many studies showed that it has survival benefit and the most common used regimens are platinum-based and 5-FU (15-19). Even though there is no clear recommendation, it is rational that choosing a proper chemotherapy regimen for KT should be based upon its origin malignancy, as we did for this patient. Despite from a small study, HIPEC was reported to benefit most in combination with CRS and has less adverse effect compared to systemic chemotherapy (20).

To the best of our knowledge, there is limited available literature investigating the role of radiotherapy. Only a few case reports described the utility of radiotherapy to the KT. Sahai et al. reported a case with KT from colon cancer (21). Bonomi et al. reported a rare case with KT from glioblastoma (22). In most case reports, radiotherapy was often given with palliative dose for symptomatic relief. There is no dose recommendation on radiotherapy for more aggressive purpose. While dealing with such a difficult case without reference to follow, we look back to radiobiology. Since most rapid growing tumors develop central necrotic area and become radioresistant, which corresponds to our case scenario, we tried a novel radiation schedule as following. Initially, we gave larger fraction dose with 2.5 Gy per fraction to the GTV-boost in order to overcome the hypoxia induced radioresistance, which had been proved with shoulder of the dose-response curves under hypoxic conditions (23). Secondly, although the exact time of reoxygenation during fractionated radiotherapy is unknown, it has been reported ranging from 1 to 3 weeks after the onset of radiotherapy (24). So, we de-escalated radiation to 2.3 Gy per fraction after 10 fractions of 2.5 Gy based on assumption that reoxygenation will take place after 2 weeks; though larger fraction dose did cause severe acute side effect and resulted in radiotherapy rest in the end of treatment. From this case report, the patient had survived for 4 years since diagnosed with KT, and had locally controlled disease after radiotherapy for 2 years since tumor progressed after second line systemic treatment, which has been never reported before. We believed that radiotherapy with dose escalation and fraction dose alteration may provide better local control for KT.

In summary, KT is a rare secondary ovarian tumor, mostly originated from the GI tract malignancy. It is characterized by poor prognosis due to its aggressiveness and poor treatment efficacy. To date, the optimal treatment has not yet been established, mainly consisting of ovarian metastasectomy, chemotherapy or palliative radiotherapy. To the best of our knowledge, there is no other study investigating the curative role of radiotherapy for KT. From this case report, we demonstrated that dose escalation and higher fraction dose radiotherapy may provide better local control for KT. Nevertheless, further studies are needed to validate the role of radiotherapy for KT.