Although breast conservation plus radiation had equivalent outcome to mastectomy after 1980s (1), mastectomy still remind one of the surgical choice of breast cancer. Radiation therapy (RT) is an increasingly common adjuvant therapy in breast cancer which provides loco-regional control and improved survival in selected patient (2,3). Furthermore, breast reconstruction has also become an integrated part of breast cancer treatment due to long-term psychosexual health factors and its importance for breast cancer survivors (4). Both autogenous flap and implant-based reconstruction provides satisfactory reconstructive options, although each has its own advantages and disadvantages. In recent years, implant reconstruction rates in the United States have risen steadily in the irradiated patient population from 27% to 52%, with a concomitant decrease in autologous reconstruction, from 56% to 32%, over the past decade (5).

This research included 15 years (between January 2003 and December 2017) of female breast cancer patient who received mastectomy with breast reconstruction and adjuvant RT to ipsilateral chest wall +/− regional lymph nodes in our hospital. Basic data, date of breast cancer surgery, tumor characteristics (laterality, size and lymph nodes), pathology report and planned treatment characteristics (radiotherapy, chemotherapy, endocrine therapy, and immunotherapy) were collected from the medical records. We exclude the patients who had distant metastasis, and who didn’t received standard adjuvant RT (Radiotherapy to other than ipsilateral chest wall or chest wall plus lymph nodes target area), and no regularly follow up patients, and no dosimetric data available in the verification system, and less than one year follow up time which may mask the late complication. We survey the type of reconstruction (autogenous, implant-based breast reconstruction or a concurrent combination of both tissue and implant reconstruction), the timing of reconstruction (immediate, two-stage with tissue expander, delayed reconstruction) and post operation early or late complication.

Two-sample t-test was used to compare differences in continuous variables in the 2 groups. Difference between categorical variables was performed using the Chi-squared test. Results were considered significant at a P value of less than 0.05.

Patients were routinely followed up every 3 months for at least one year. Acute and late toxicities associated to RT were recorded according to the Common Terminology Criteria for Adverse Events version 3.0. Capsular contracture was classified via modified Baker/Palmer classification (Figure 1).

This study was approved by the Institutional Review Board of China Medical University Hospital (CMUH107-REC3-044).

During January 2003 to December 2017, there were 227 patients received mastectomy. Among these patients, 34 patients performed breast reconstruction. After excluded the patients who didn’t meet the inclusion criteria, 29 patients were enrolled in this retrospective study (Figure 2). 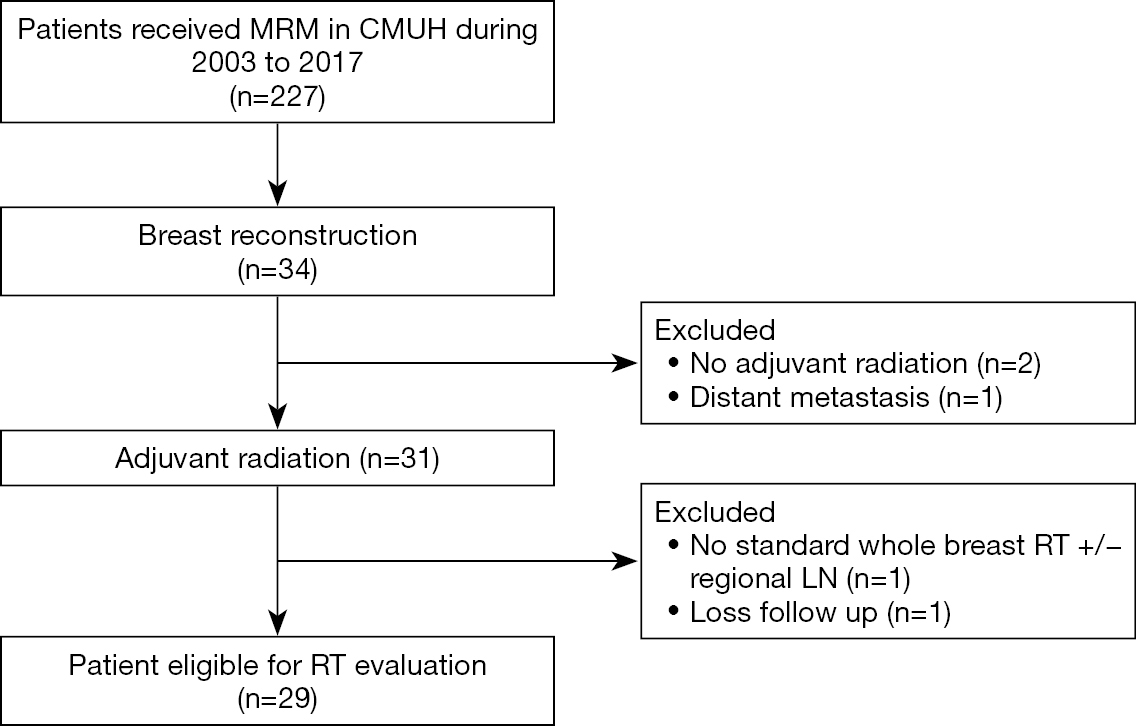 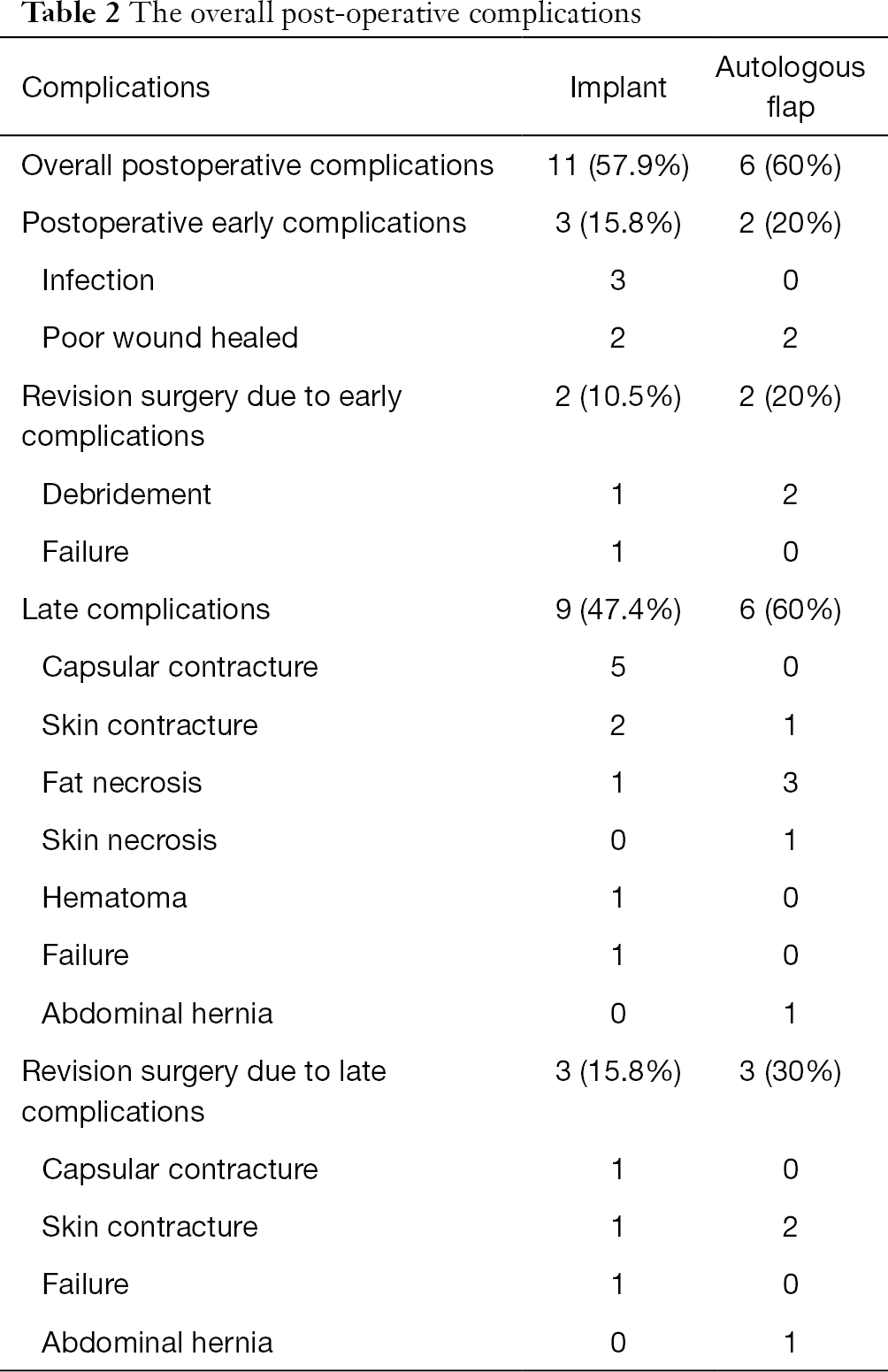 Radiation technique was shown in Table 3. Fifteen patients had received tumor bed electron boost for additional 10 to 16 Gy, only 7 of them had positive margin. None of these 29 patients added bolus during whole breast irradiation. Lymph node irradiation technique was 12 people via anterior-posterior field, and 15 people via IMRT. Acute radiation complication of grade 3 skin reaction only developed in one person with implant reconstruction. No grade 2 or above RT late complication developed. 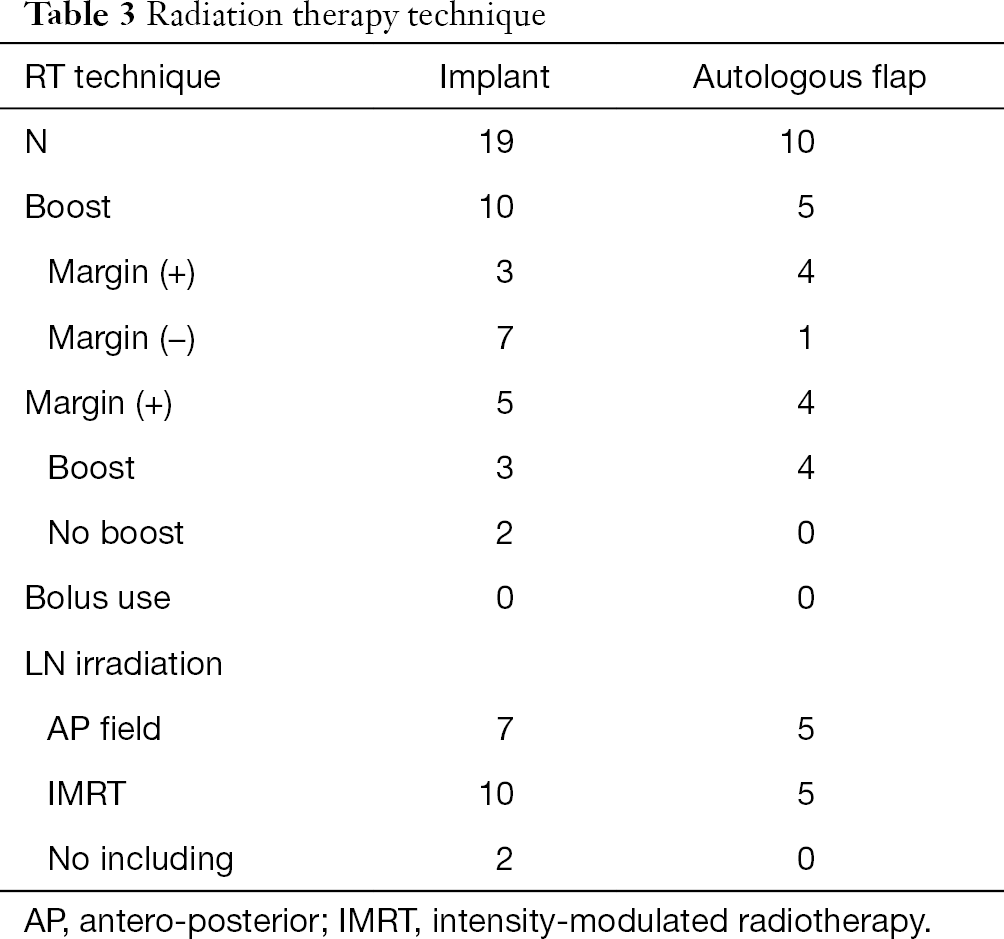 Dose dosimetry analysis included PTV D95, maximum dose, CTV V105, CTV V107, ipsilateral lung V20, ipsilateral lung V5, mean heart dose and heart V25 was shown in Table 4. Between implant and autologous flap reconstruction, there were no significant differences, no matter right side or left side breast cancer. Besides, both types of reconstruction techniques can reach acceptable dose distribution. Comparing patients who had revision of operation due to late complications which may be associated with RT, there was still no significant difference between each other except ipsilateral lung V5 and V20 (Table 5).

Dose distribution and organ at risk analysis were also no significant in some paper (12,13). Adequate dose to the reconstructed breast is feasible in women who undergo immediate reconstruction after mastectomy, regardless of the reconstruction type or laterality of the treatment plan. Even though inclusion of IMN may result in higher doses to the heart, study suggest that clinically acceptable doses to the heart and lungs can be achieved in most patients (13). Besides, inclusion of the IMN as part of regional nodal irradiation can reduce the risks of local-regional failure and breast cancer mortality for patients with T1-2 breast cancer with one to three positive axillary nodes (3). There were five patients had IMN irradiation in our study, all of them achieved acceptable coverage. The maximum dose to the skin (58.5 versus 61.7 Gy; P=0.05) and the maximum dose to 1 cc of skin (54.4 versus 57.4 Gy; P=0.01) were associated with increased complication rates and should be given consideration as a vital organ. However, no specific cut off dosage had suggested (14).

The authors thank the members of the Cancer Center (China Medical University Hospital) for their invaluable help.

Ethical Statement: The authors are accountable for all aspects of the work in ensuring that questions related to the accuracy or integrity of any part of the work are appropriately investigated and resolved. This study was approved by the Institutional Review Board of China Medical University Hospital (CMUH107-REC3-044).