In patients with locoregionally advanced NSCLC, concurrent chemoradiotherapy (CCRT) was the preferred treatment in cases where surgery could not be performed. Despite improvement in radiotherapy (RT) techniques and systemic therapies, the overall survival, disease-free survival, and local control remain unsatisfactory among these patients. For example, use of RTOG 06-17 escalated the total dose of conventional RT required but failed to improve local control and patient survival (3).

Herein, we report the case of a patient with locoregionally advanced NSCLC. Combination of SBRT (60 Gy, 3 fractions) and conventionally fractionated RT (62 Gy, 31 fractions) were administered to the primary tumor and the mediastinal lymph nodes, respectively.

We present the following case in accordance with the CARE Guideline.

A 55-year-old heavy smoking man was diagnosed with adenocarcinoma of the right upper lung lobe [cT1bN2M0, stage IIIA; (Aug., 2015; AJCC 7th edition)] with a wild-type epithelial growth factor receptor (Figure 1). The patient had severe chronic obstructive pulmonary disease and demonstrated poor outcome after he underwent a total laminectomy, 1.5 months before diagnosis, at the C6-T4 level for the removal of dural arteriovenous fistula. He had paraplegia, with bilateral weakness of hands and choked easily. Because of his significant co-morbidity, the surgery was expected to involve high risk; thus, the surgical oncologist of the thoracic medicine department recommended against the surgery. Therefore, treatment with definitive CCRT was suggested after discussion with the patient and his family.

Because of his poor medical condition, preservation of pulmonary function assumed priority. To achieve maximal tumor control of both local and regional diseases, and to prevent additional toxicities, SBRT with conventionally fractionated RT seemed a better alternative. Therefore, we performed a combination of RT techniques such as: SBRT for eradicating the primary lung tumor and conventionally fractionated RT for managing the mediastinal nodal disease.

In the RT treatment plan, SBRT, with a total dose of 60 Gy in 3 fractions, was prescribed to treat the primary lung tumor. By observing the internal motion with respiration-gated simulation technique, the primary plan target volume (PTV) was generated from the gross lung tumor with a circumferential margin of 5 mm and a longitudinal margin of 10 mm (Figure 2A). The radiation dose was prescribed to cover >95% of the primary PTV, and >99% of the primary PTV received a minimum of 90% of the prescribed dose (i.e., 54 Gy; Figure 2A,B). Conventionally fractionated RT was administered to the gross mediastinal nodal disease with a total dose of 62 Gy in 31 fractions. Nodal PTV was generated from the gross nodal disease with a margin of 5–10 mm [i.e., nodal clinical target volume (CTV)] and a set-up margin of 5 mm (Figure 2B). The radiation dose was prescribed on the 95% isodose line with a coverage rate of >97% of the nodal PTV (Figure 2A,B). Both SBRT and conventionally fractionated RT were delivered with volumetric-modulated arc therapy technique. The combined SBRT and conventionally fractionated RT achieved an overall clinically acceptably physical profile on normal organs (Table 1), as reported by the RTOG 06-17 (3) and RTOG 06-18 trials (9). 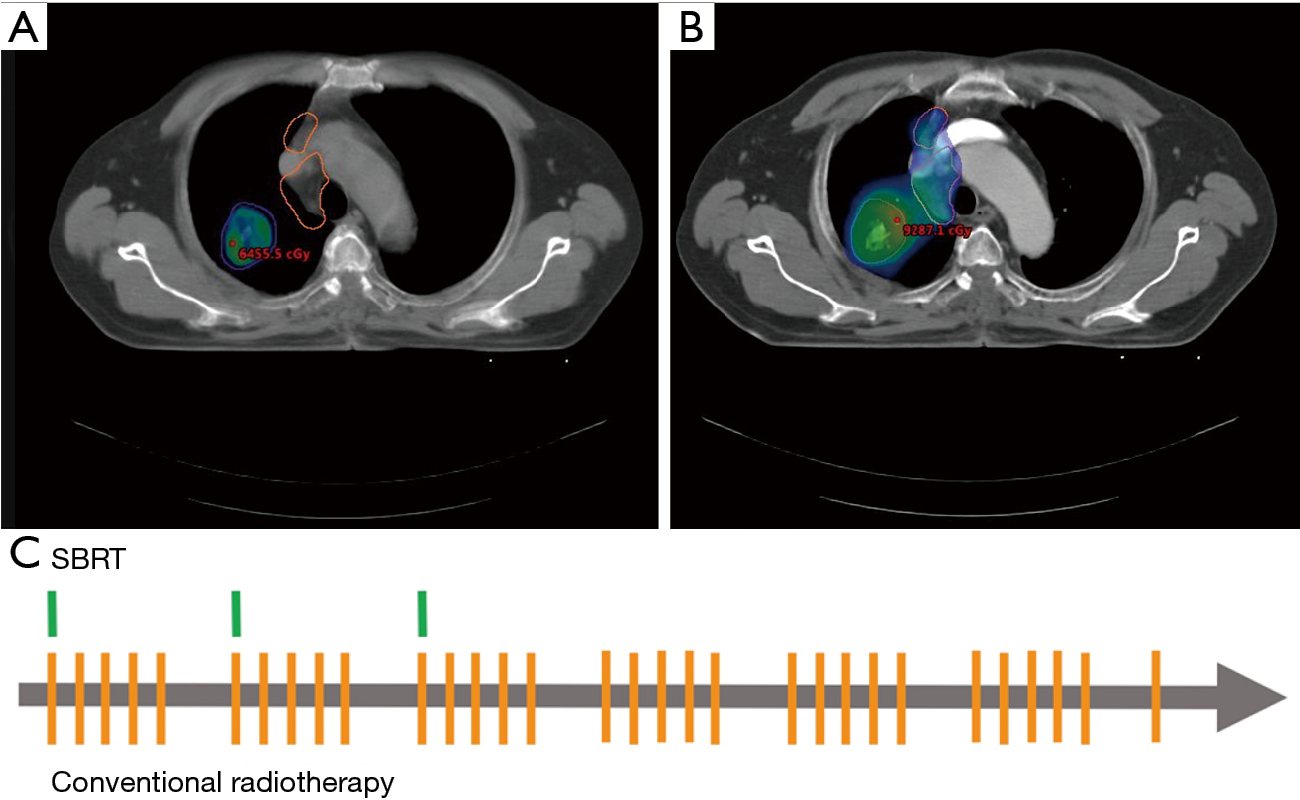 Figure 2 Targeting and dose painting on treatment planning system and RT schedule. (A) Primary PTV (purple) was irradiated by SBRT with a total dose of 60 Gy in 3 fractions, once per week, in the initial 3 weeks of the RT course; (B) dose painting of the combined SBRT (i.e., 60 Gy in 3 fractions to primary lung tumor) and conventionally fractionated RT (i.e., 62 Gy in 31 fractions to the mediastinal nodal disease); (C) scheme depicts the combined RT course. PTV, plan target volume; SBRT, stereotactic body radiotherapy; RT, radiotherapy. 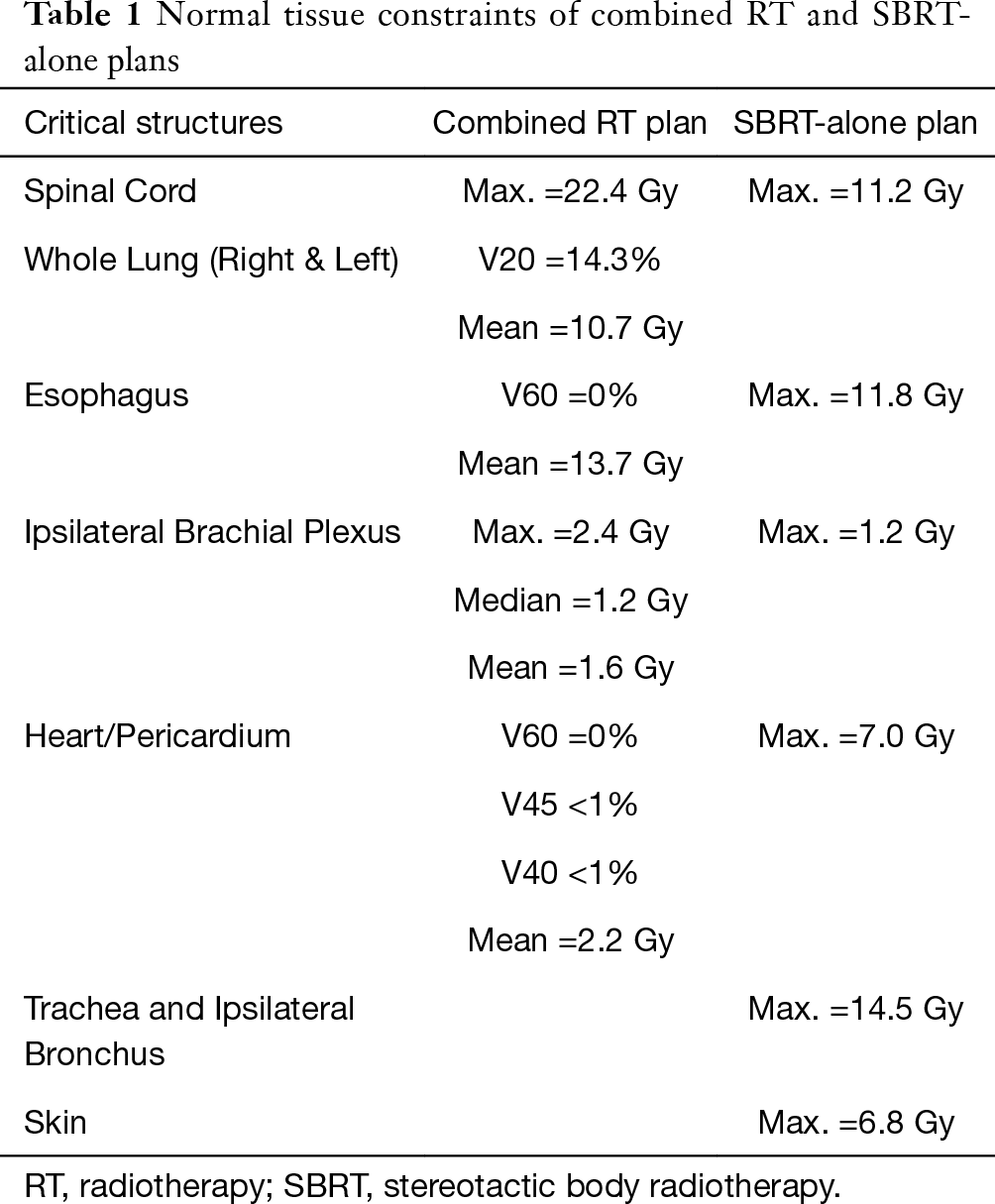 From October 2015 to November 2015, a total dose of 62 Gy of conventionally fractionated RT was delivered successfully in 31 fractions (once every week days for 6 weeks). Concurrently, a total dose of 60 Gy of SBRT was delivered in 3 fractions (once per week, during the first 3 weeks of the entire course of RT) (Figure 2C). During the RT course, respiration-gated technique, daily on-board images, and weekly cone-beam computed tomography (CT) were performed to assist precise irradiation. Concurrently, chemotherapy was administered every 3 weeks with a combined regimen of vinorelbine (60 mg/m2) and cisplatin (60 mg/m2).

During the whole treatment course of CCRT, no significant acute toxicities or late sequelae occurred until the last follow-up (i.e., 2 years after CCRT course). Only minimal toxicities, such as grade 1 fatigue and grade 1 poor appetite, were observed, according to the Common Toxicity Criteria of Adverse Events v4.0 (10). A durable complete response of the primary lung tumor and regional nodal disease was confirmed at 6 months, 1 year, and 2.5 years after RT (Figure 3).

Written informed consent was obtained from the patient for publication of this case report and any accompanying images. A copy of the written consent is available for review by the Editor-in-Chief of this journal.

Even today, patients with locoregionally advanced lung cancer still demonstrate unsatisfactory clinical outcomes. A systematic review showed high locoregional failure rates of 31–100% after CCRT regimen (11). According to the RTOG 06-17 trial, dose escalation of RT to 74 Gy failed to improve the overall survival and tumor control when compared with the initial dose of 60 Gy (3). The 2-year local failure rate was 30.7% for the 60-Gy arm and 38.6% for the 74-Gy arm.

To improve local control, SBRT, as an adjunct for treating residual disease, was adopted by three prospective studies for locally advanced NSCLC. The 1-year local control rates in these studies ranged from 76% to 86% with a prescribed a BED of 100–150 Gy (5-7). Higgins et al., reported a maximally tolerated dose of 30 Gy in 5 fractions as an adjunct to 44 Gy of thoracic CCRT for patients with locally advanced NSCLC, with a total BED of 100.8 Gy (7).

Studies that have combined the two RT techniques to achieve locoregional irradiation of a large area for gaining twice the benefits are not uncommon. For example, in patients with head and neck cancer, split-field intensity-modulated radiation therapy (IMRT) has been reported to be comparable to whole-field IMRT (19). Two benefits of split-field IMRT have been documented—first, the application of IMRT to primary tumors and upper nodal disease provides dose-focused and normal-tissue-sparing effects of IMRT, and second, using AP-PA half-beam central-blocked irradiation to the lower neck helps reduce the dose administered to the larynx/hypopharynx to preserve speech and swallowing functions. Herein, our case suggested a new technical combination of RT to gain twice the benefits of SBRT for the improvement of primary lung tumor, and conventionally fractionated RT to treat mediastinal nodal disease.

Till date, SBRT has been proven to be a curative modality for treating patients with early-stage NSCLC. A phase I study showed that combination of SBRT with concurrent administration of conventionally fractionated chemoradiation could pass the normal tissue dose constraints in patients with stage III NSCLC; however, the primary outcome of toxicities had not been published yet (8). The efficacy of SBRT to manage locoregionally advanced lung cancer remains unclear. Therefore, more data are required for conclusive results. To our best knowledge, the present study has strived to discover a new treatment modality using combined CCRT with concurrent SBRT and conventional RT for managing locoregionally advanced NSCLC. Durable tumor control with minimal toxicities could be achieved. Therefore, additional prospective clinical trials are encouraged to obtain conclusive results.

Concurrent administration of SBRT in conjunction with conventionally fractionated RT may be effective for the total management of both primary tumor and nodal disease in patients with locoregionally advanced NSCLC. Favorable treatment outcomes with minimal toxicities could be achieved with this strategy. However, additional randomized control trials should be undertaken to distinctly demarcate the actual effect size in this type of technical combination of RT.

Ethical Statement: The authors are accountable for all aspects of the work in ensuring that questions related to the accuracy or integrity of any part of the work are appropriately investigated and resolved. Written informed consent was obtained from the patient for the publication of this case report and any accompanying images. A copy of the written consent is available for review by the Editor-in-Chief of this journal.