Sacral insufficiency fracture (SIF) occurs when normal stress placed on weakened bone, which presents with low back or pelvic pain. SIF was first described in 1982 by Lourie (1). Elderly women with osteoporosis are thought to be the highest group of SIF (2). Most of patients are over 55 years old, and the majority of them are between 70 and 75 years old. Other risk factors include previous pelvic radiotherapy (RT) history, steroid-induced osteopenia, hyperparathyroidism, and multiple myeloma (2-4). RT may increase fracture risks by the effect of bone damage. The prospective randomized trials (Stockholm I and Stockholm II) revealed that rectal cancer patients received RT increased the incidence of femoral neck and pelvic fractures (P=0.03) (5-7). Uezono et al. reported that the 2-year cumulative incidence of pelvic insufficiency fracture was 32% for cervical cancer patients after definitive RT (8). For the cervical and endometrial cancer patients after postoperative pelvic RT, those who with osteoporosis, the pelvic insufficiency fracture rate at 5-year was 15.6% compared with 2.9% for those without osteoporosis (P=0.01) (9).

Pain is the common presentation of SIF, especially for diffuse low back pain, which may radiates to the hip or buttock with intractable or acute pattern, and it is often confused with other diagnosis in the elderly (3,4,10,11). Low back pain in the elderly might confuse clinicians with radiculopathy, bone metastases, or possible occult cancer, so the differential diagnosis is important. Now with multiple established image findings (including CT scan, bone scintigraphy and MR imaging) help us to make assurance of SIF. We presented a patient with endometrial cancer who complained of low back pain after adjuvant RT. Finally, SIF was detected by magnetic resonance imaging (MRI).

We present the following case in accordance with the CARE reporting checklist (available at http://dx.doi.org/10.21037/tro-17-tastro-16).

This 67-year-old woman was diagnosed with endometrioid adenocarcinoma, pT1aN0M0, stage Ia, grade 3 in 2014. She received staging surgery (total abdominal hysterectomy, bilateral salpingo-oophorectomy, bilateral pelvic lymph nodes dissection, omental biopsy and peritoneal washing cytology) followed by adjuvant RT. The setting was helical therapy (Tomotherapy) technique with 6 MV photon. RT fields based on RTOG Gynecologic IMRT Consortium (12) included vaginal cuff, parametrial tissues, common iliac, external, and internal iliac nodal regions (Figure 1). The prescribed dose was 50.4 Gy in 28 fractions from November 2014 to December 2014. Then, she was under regular follow-up at radiation oncology and gynecology department. After completion of RT for 6 months, she complained of diffuse low back pain without neurological symptom, but denied any trauma history. Bone metastasis was impressed. However, reviewing her CT of abdomen and pelvis on July 30th, 2014 before treatment, it showed no fracture lines, cortical destruction, neither obvious sclerosis of SI joints (Figure 2). The physical examination revealed non-specific knocking tenderness over low back which cannot be precisely localized. In addition, the pelvic and rectal examination were all normal.

Figure 1 The isodose curve is shown above using tomotherapy. 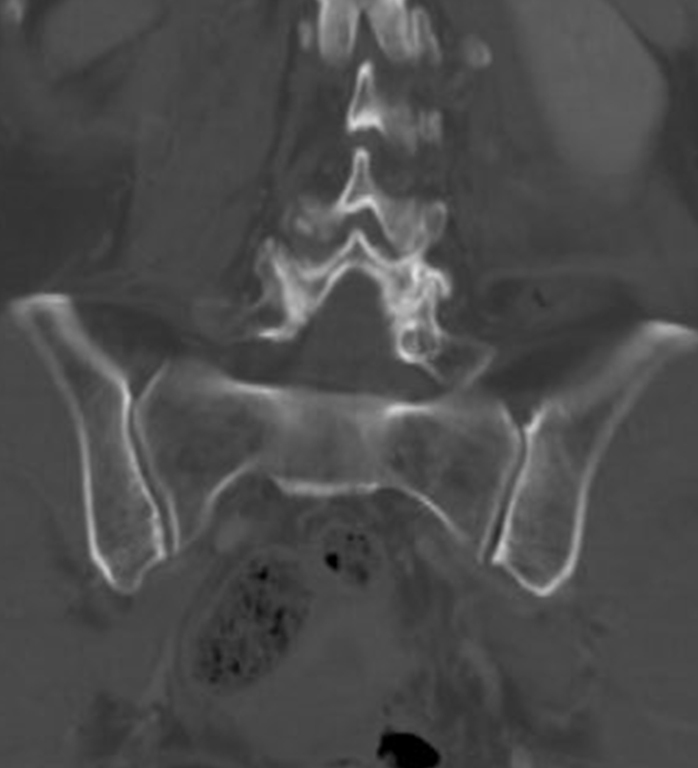 Figure 2 No obvious bone abnormality on coronal view of pelvis CT in 2014/7.

The gynecology oncologist arranged the X-ray examination (plain films, anterior-posterior/lateral) of thoracic-spine and lumbar-spine, and the bone mineral density test to rule out osteoporosis. The result of the plain films showed spondylolisthesis, and T-score of the bone mineral density test was −2.6, indicating osteoporosis (<−2.5). Due to her cancer history, the abdomen-pelvis computer tomography and bone scintigraphy was arranged for survey. The computer tomography revealed no significant finding, but the whole body bone scan disclosed the suspect bone metastases at left sacroiliac joint (SI joint) (Figure 3). Considering the osteoporosis-associated fracture is a common present in elderly women, we perform the MRI of SI joint to differentiate whether these lesions are benign process or malignancies. The results of MRI confirmed the diagnosis of radiation-associated SIF. The SIF is characterized by the signs of marrow edema which noted by Short T1 Inversion Recovery (STIR) MR images (Figure 4). The conservative treatment with bed rest and simple opioid analgesia was given. After supportive care for 4 months, her back pain subsided during regular follow-up, and she felt well. In addition, the CT in March, 2016 after completion of RT for one year demonstrated some bone sclerosis and equivocal fracture lines, seemed bone union (Figure 5). 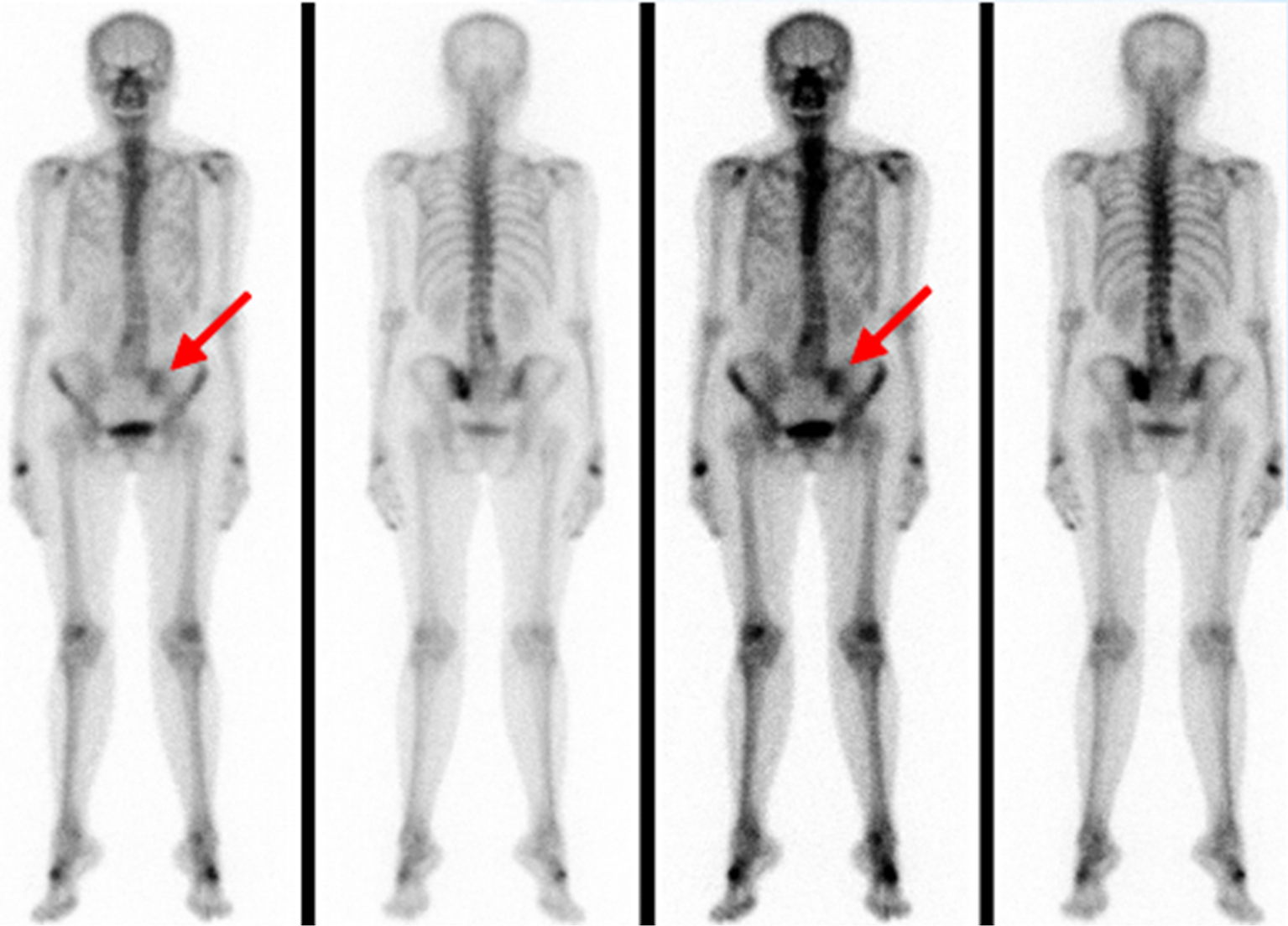 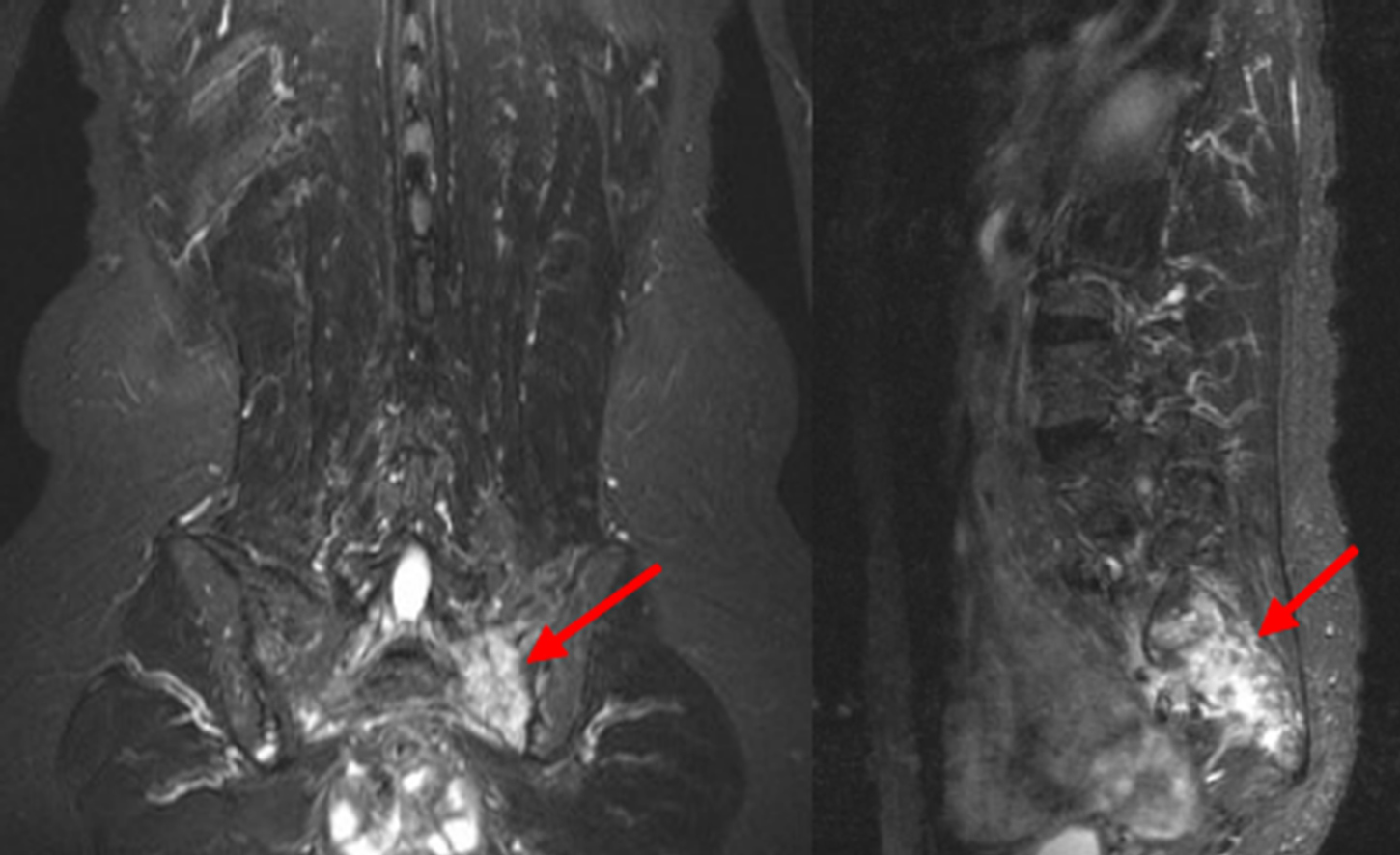 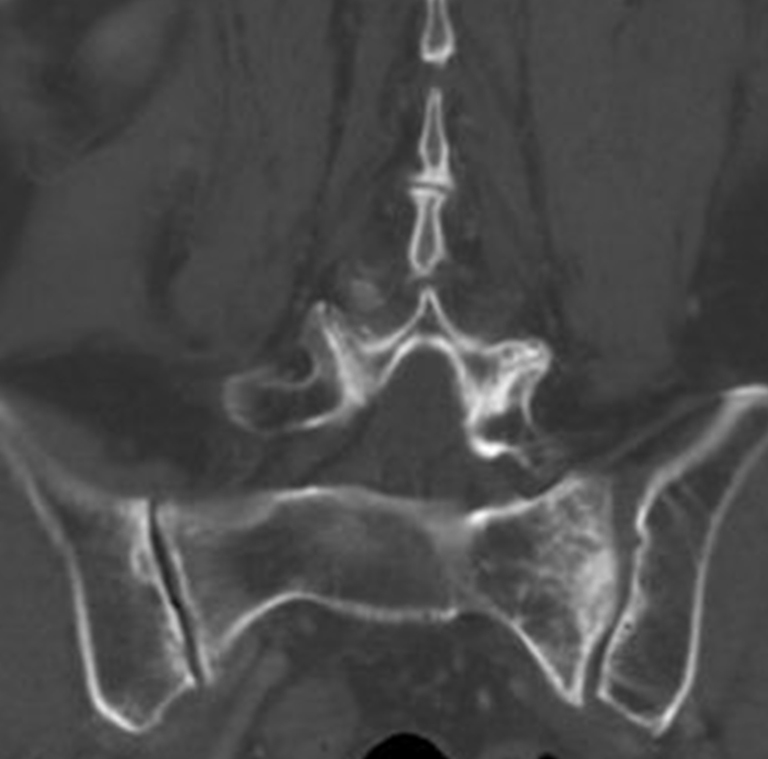 Insufficiency fractures are stress fractures due to normal stress applied to abnormally weakened bone that has lost its elastic resistance (13). The most common site is the sacrum ala, known as a SIF (14).

The common cause of SIF is post-menopausal osteoporosis. However, RT become an essential treatment of gynecologic cancers, and prior pelvic RT is also reported as a risk factor, either definitive or adjuvant treatment (4,8,9,15). The prevalence of SIF is 21-34% in the population with prior pelvic radiation (4,15,16).

Shih et al. demonstrated that 222 patients of cervical or endometrial cancer treated with postoperative pelvic RT, who has osteoporosis or prior hormone-replacement therapy developed higher risk of pelvic insufficiency fractures (15.6% vs. 2.9%, P=0.01 and 14.8% vs. 4.1%, P=0.009, respectively) (9). Even with modern technique of intensity-modulated radiation therapy (IMRT), there is no difference in the rate of pelvic insufficiency fractures comparing with conventional RT (9). Retrospective study of SEER database with 6,428 women older than 65 years revealed that 5-year cumulative pelvic fracture rate significantly increased in who received pelvic irradiation: 8.2% vs. 5.9% (hazard ratio, 1.66; 95% confidence interval, 1.06–2.59) (17).

Injury and occlusion of the microvasculature of bone and stasis of osteoclasts are thought to be major mechanisms of radiation-induced insufficiency fracture. It is known as “radiation osteitis” which includes a radiation-induced inflammatory response in blood vessels, nerve tissue, and bone cells that may lead to fracture of trabecular and cortical bone (18).

SIF may be presented with fracture lines and bone sclerosis by plain films or CT imaging. Plain films with anterior-posterior & lateral are not good detectable tools due to the obscurity of bowel gas or invalid fracture lines. The computed tomography of pelvis can well demonstrate fracture lines and sclerosis, and differentiate from cortical destruction and/or a soft-tissue mass in cases of tumor involvement. However, the diagnostic sensitivity of SIF by computed tomography is around 60% to 75% because early signs of SIF on CT is not obvious (14,19). The bone scintigraphy has good sensitivity about 96% for diagnosing SIF by presenting with H-pattern (20–40% of patients) (16,20). Nevertheless, it can be misdiagnosed as isolated bony metastases, especially in the population with previous cancer history. The MRI is useful for early detection of SIF. It can provide the same sensitivity as bone scintigraphy and can differentiate SIF from bony metastases if there is tumor mass identified (14,19,21). The marrow edema is early sign of SIF seen on the MR imaging, especially in STIR MR images.

The treatments for SIF are analgesic medication and bed rest. The conservative management can help most patients return to their normal life in a period of time. Only some patients with instable fracture or intractable pain may need surgery. The sacroplasty treatment reported good symptoms relief in SIF patients (14).

Although one case is in the present study, SIF is still under-diagnosis, especially among cancer patients due to malignant history. Besides, a lot of studies demonstrated the same findings, including long-term follow-up of Stockholm I and Stockholm II trials (6).

In this case report, we demonstrated an endometrial cancer patient with osteoporosis who received adjuvant RT with low back pain after 6 months of pelvic RT. Whole body bone scans disclosed the suspect bone metastases at SI joint. However, with the accurate diagnosis of SIF by MRI, this patient had subsequent favorable clinical course and outcome with resolution of symptoms by conservative treatment.

Reporting Checklist: The authors have completed the CARE reporting checklist. Available at http://dx.doi.org/10.21037/tro-17-tastro-16.