Radiation recall dermatitis (RRD) is characterized by an acute inflammatory dermatological reaction confined to previously irradiated skin after the precipitating agent is administered. RRD is a poorly understood and unpredictable phenomenon with several possible mechanisms proposed (1). RRD could be triggered by a variety of both antineoplastic and non-antineoplastic agents and could occur weeks to years after radiotherapy (2-5).

As the technique of radiotherapy advances, we can expect the combination of Sorafenib and radiotherapy more commonly seen in clinical practice. Recognizing RRD is of clinical importance to provide adequate management and improve patients’ quality of life.

She received regular abdominal sonographic examination in our hospital every 6 months after colon cancer surgery. Eight months later, a hyperechoic nodule in liver segment 8, with estimated size of 1.6 cm, was detected. Her serum alpha-fetoprotein level was elevated (6.2 ng/mL). The patient decided to receive observation first instead of further investigation or intervention. A month later, new occurrence of liver segment 5 tumor with 2.3 cm in size, and increasing size of prior S8 tumor were found by triphasic computed tomography scan. Secondary HCC, clinical T2N0M0, stage II, was diagnosed clinically combining classic image features, elevated serum alpha-fetoprotein level (29.48 ng/mL) and further staging workup. She was treated with transarterial chemoembolization (TACE) once followed by 6 times of radiofrequency ablation (RFA) in the next four months.

With clinical complete response of liver tumors, she kept regular follow-up per 3–4 months in our institution afterwards without evidence of recurrent disease for 2 years. Then she presented severe lower back pain for 2 weeks, caused by bone metastases confirmed by Tc-99m bone scan. A recurrent HCC over segment 5 of liver was found by abdominal Magnetic Resonance Imaging. No obvious recurrent tumor was noted before in the follow-up sonography. Her serum alpha-fetoprotein level remained within normal range (≤9 ng/mL) and elevated to 12.27 ng/mL at the diagnosis of recurrence. Radiotherapy to symptomatic bone metastases including T8-9 spine with radiation dose of 3,000 cGy in 10 fractions was delivered by 6 MV photon beam using 2D single posterior-anterior (PA) field technique, prescribed to the depth of 5.5 cm. The radiation treatment field was shown in Figure 1. There was no adverse event after the initiation and during the radiotherapy until a month after completion of radiotherapy, when sorafenib 400 mg was administered orally twice daily for her metastatic disease. Progressive pruritus occurred and restricted to the previous irradiated skin of lower back. One week after starting sorafenib, the patient presented with grade 1 pruritus, erythema, desquamation and hyperpigmentation without pain (CTCAE v4.03), all confined to previous irradiated skin area (Figure 2). There was no skin reaction prior to starting sorafenib. 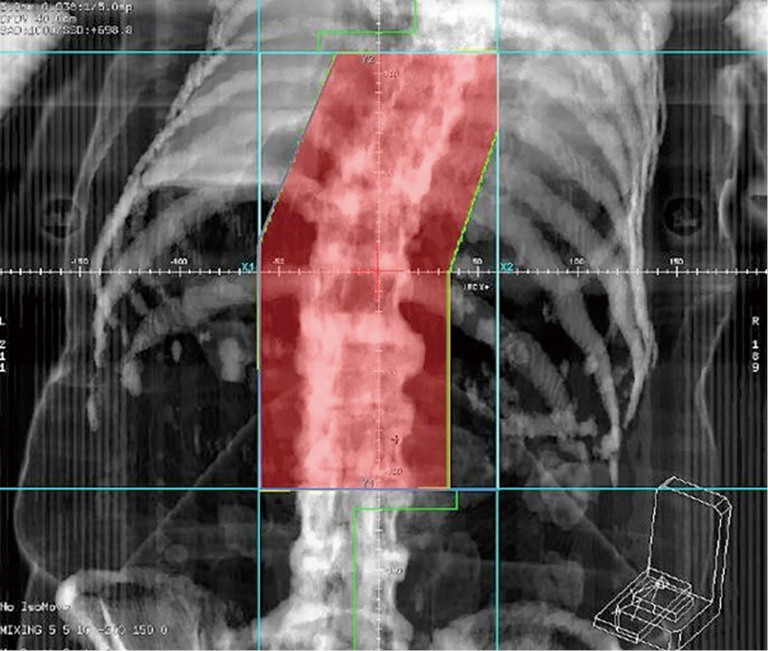 Figure 1 The field of radiation treatment. Radiotherapy to symptomatic bone metastases including T8-9 spine with radiation dose of 3,000 cGy in 10 fractions was delivered by 6 MV photon beam using 2D single posterior-anterior (PA) field technique, prescribed to the depth of 5.5 cm. The irradiated field was shown in the color of red. 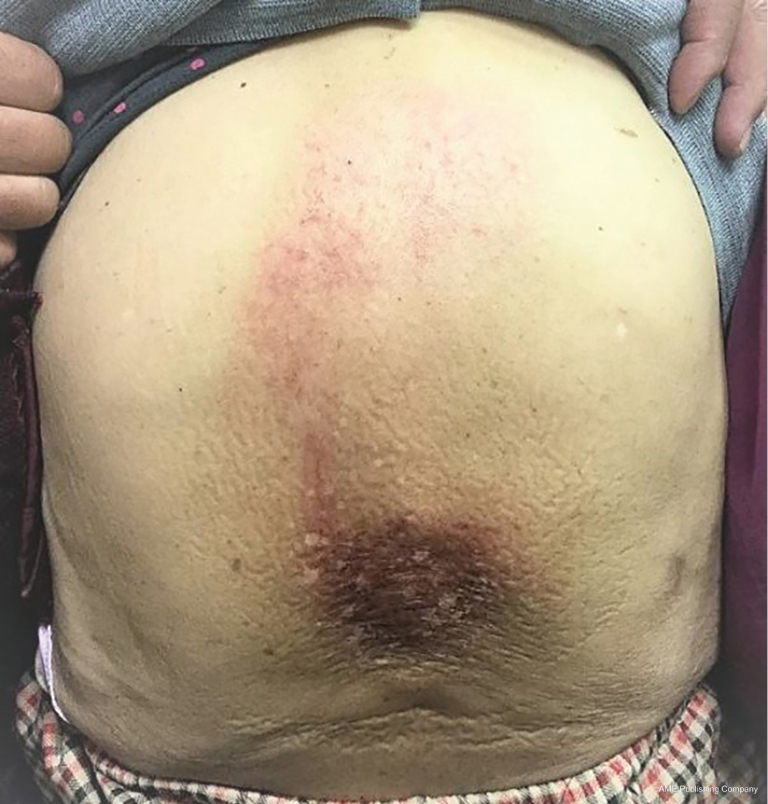 Figure 2 The image of radiation recall reaction in the skin of back. One month after completion of radiotherapy, sorafenib was administered for the patient’s metastatic disease. Progressive pruritus occurred and restricted to the previous irradiated skin of lower back. One week after starting sorafenib, the patient presented with grade 1 pruritus, erythema, desquamation and hyperpigmentation without pain (CTCAE v4.03), all confined to previous irradiated skin area.

The intensity of skin reaction was not homogenous with a more severe reaction confined to skin folds, compared to the upper and middle part of the irradiated field where the surface was flattened with relatively mild skin reaction within the higher dose curve of 3,800 cGy (Figures 3,4). The dose to the front of the chest was 500–1,000 cGy without any skin reaction after starting sorafenib. 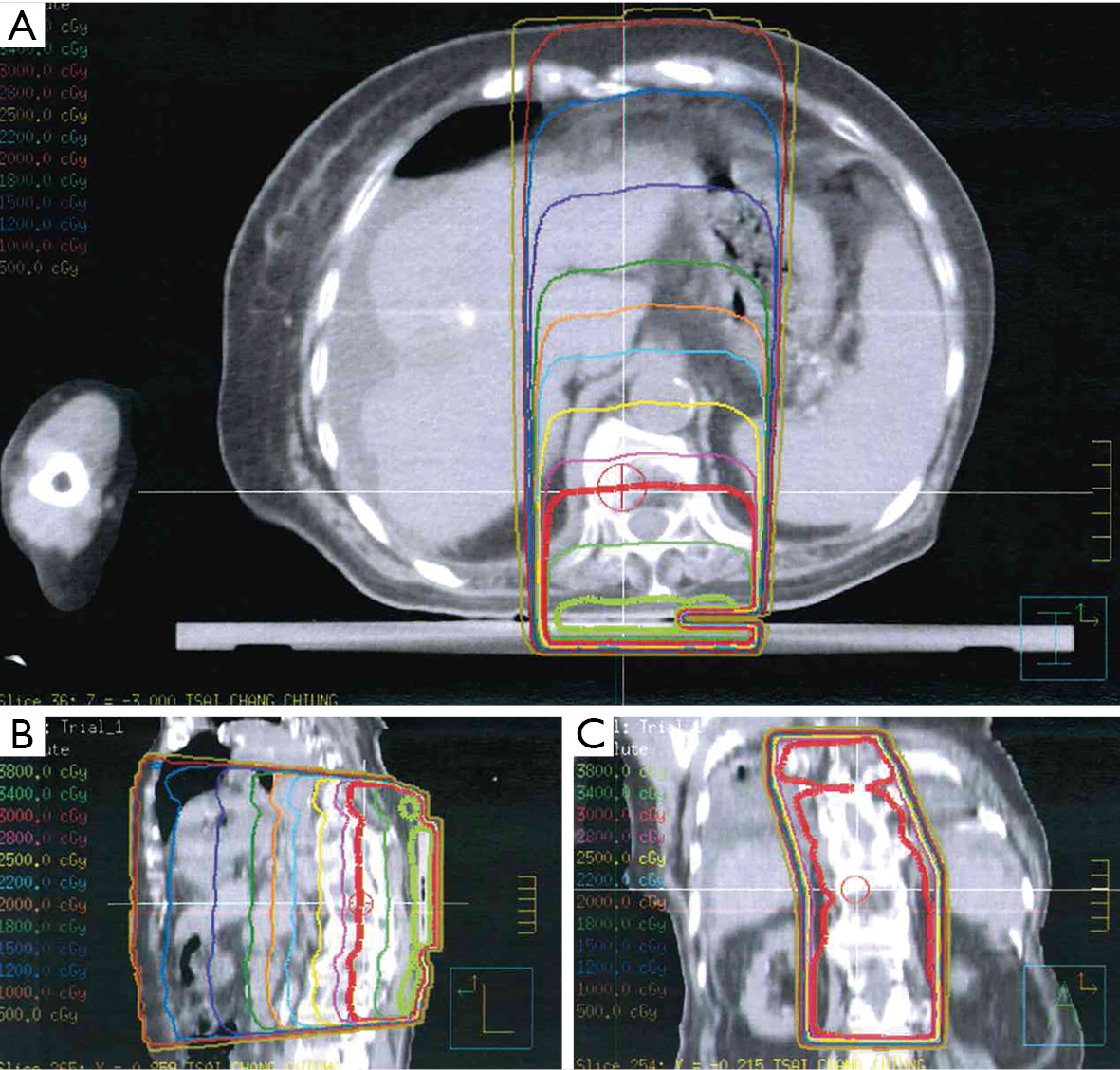 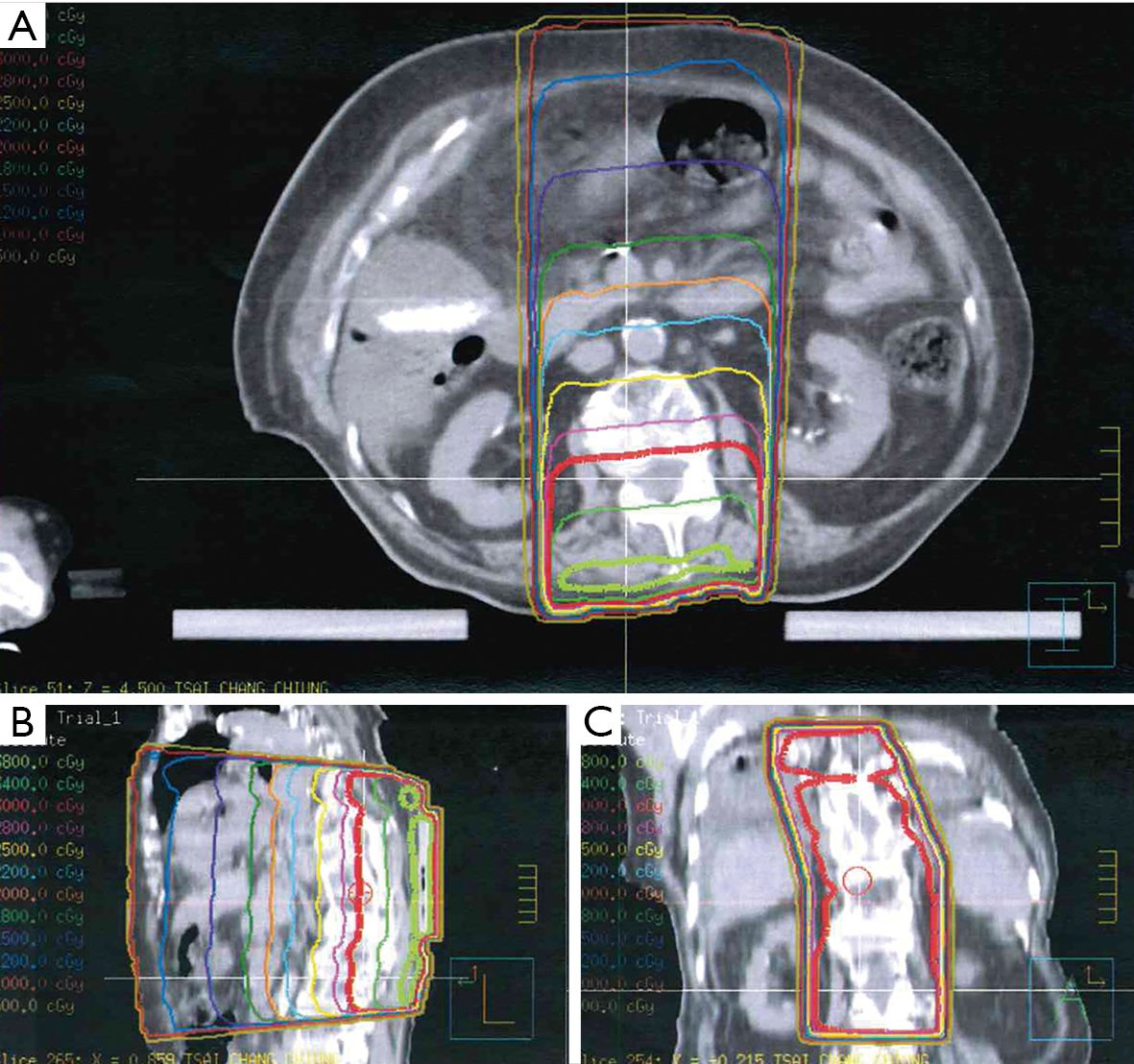 The clinical presentation was consistent with recall radiation dermatitis. Topical steroid cream was prescribed for the dermatologic symptoms without adjusting the dose of sorafenib. Her skin reaction resolved in several days later with no other adverse reactions.

The clinical presentation of radiation recall dermatitis has been described as: hyperpigmentation, pruritus, erythema, desquamation, erythematous rash, and eczematous dissemination, which differs between each individual (1,6,7,9,12). The severity of skin reaction varies and there might be a time- and radiation dose-dependency. A minimum threshold of radiation dose to skin with 7 Gy is proposed to cause recall dermatological reaction (9). The associated radiation doses ranges from 20 to 70 Gy in reported sorafenib-triggered RRD. The dose of Sorafenib varies from 200 mg twice daily to 400 mg twice daily.

Although not fully understood, several possible mechanisms of radiation recall dermatitis has been proposed: (I) It is possible that stem cells in the irradiated area have increased sensitivity to subsequent chemotherapy. (II) Another hypothesis of cutaneous radiation recall reaction involves activation of nonimmune inflammatory pathways. Irradiation lowers the threshold of inflammatory response and induces continued low-level secretion of the inflammation-mediating cytokines. The administration of a promoting agents may upregulate these cytokines and then causes a radiation recall reaction. (III) The histologic features suggest that keratinocyte necrosis plays a major role in radiation recall. The mechanism is related to increased oxidative stress and direct DNA damage caused by specific chemotherapeutic agents, which leads to accelerating cellular necrosis (3,4,13).

The pathological finding of sorafenib-induced skin reaction can show both keratinocyte damage of varying degrees as in sorafenib-induced skin reaction and inflammatory reaction with wound healing process as in acute radiation dermatitis (14,15). Stieb et al. reported a skin biopsy of RRD caused by sorafenib and the histological finding mimicked graft-versus-host reactions of the skin or cutaneous drug allergies, suggesting that the mechanism might be immune-mediated (12). In our case, the clinical condition did not justify a skin biopsy and therefore it was not performed.

Sorafenib is an oral multi-kinase inhibitor targeting several serine/threonine and receptor tyrosine kinases. Sorafenib was shown to interact with multiple intracellular (CRAF, BRAF and mutant BRAF) and cell surface kinases (KIT, FLT-3, VEGFR-2, VEGFR-3, and PDGFR-β). Several of these kinases are thought to be involved in angiogenesis. VEGF would be increased in a time- and dose-dependent manner after sublethal irradiation damage to HCC cells in vitro, leading to enhanced intratumor angiogenesis in vivo and correlating well with serum VEGF (16). Sorafenib might enhance the efficacy of radiation, when administered following radiation. Current standard treatment indicates sorafenib can be considered in selected patients based on two randomized phase 3 clinical trials that have demonstrated survival benefits (17,18). The Taiwan Food and Drug Administration has approved sorafenib in current clinical practice for the treatment of patients with advanced RCC, advanced HCC, and locally advanced or metastatic, progressive differentiated thyroid carcinoma refractory to radioactive iodine treatment (RAI-R DTC).

Skin reactions are among the most common adverse reactions of sorafenib. When combined with radiation, sorafenib could present the radiosensitizing effect (19). Potential photosensitivity of sorafenib has been reported by Hsieh et al. describing a case of RCC with photo-induced recall dermatitis secondary to sorafenib (20).

Chung and colleagues reported in 2010 the first case of sorafenib-triggered radiation recall dermatitis after completing radiotherapy to the liver metastases (1). We summarize the characteristics of previously reported sorafenib-triggered RRD in Table 1. The average age is 58.7 years, including the current case. The total dose of radiotherapy ranges from 20 to 70 Gy. Most of the sorafenib-induced RRD happens within 1 to 2 weeks after the beginning of sorafenib therapy. 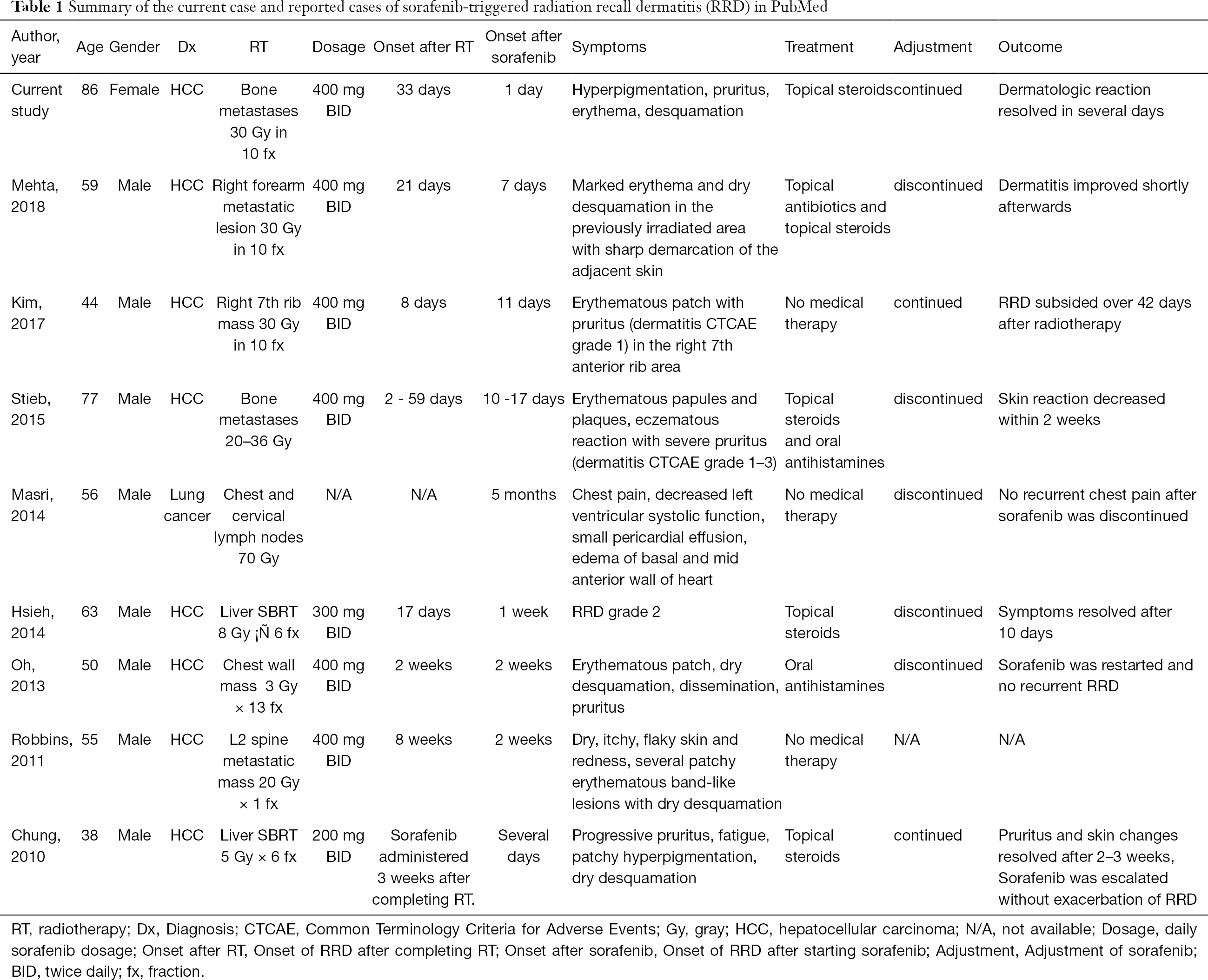 The presentation of our case also supports the proposed threshold dose for radiation recall dermatitis being isodose 20 Gy in literature review. The skin with RRD generally received more than 20 Gy while no skin reaction was observed in lower dose areas (less than 10 Gy in anterior chest wall). The severity of RRD could be affected by radiation dose. Our patient had more severe reaction at the bottom part. Combing the fact that the bottom of irradiated filed was not perpendicular to the beam and the patient had more loose skin in her lower back, we believe the phenomenon could be explained by hotspots caused by the propensity for higher doses of radiation to reach the skin folds.

The time interval between completing radiotherapy and the administration of triggering agents might aid in differentiating radiation recall dermatitis from the radiosensitization effect as later occurrence (e.g., >7 days) is observed in RRD (14). The likelihood of developing RRD seems to be decreased as the time interval between radiotherapy and exposure to RRD-eliciting agents.

The management of RRD includes either decreasing the dose or discontinuing of eliciting agents with systemic steroid therapy, topical treatment, or antihistamines. However, in our case, sorafenib was continued at the same dose after evaluation. After topical steroid cream was used, the dermatologic reaction resolved within days. In cases that sorafenib was discontinued, the severity of skin reaction and the clinical condition should be evaluated before re-administration. The re-administration of sorafenib has not been reported to trigger the recurrence of RRD.

Here we present a case of recall radiation dermatitis one week after starting sorafenib, with RRD of skin matched previously irradiated area of T8-9 spine. Given the fact that the skin reaction occurred 33 days after completing radiotherapy and confined to irradiated skin area, the diagnosis of RRD is more likely than either acute radiation dermatitis or adverse skin reaction of sorafenib.

In the GLOBOCAN 2018 estimated new cases of cancer incidence, 29% of liver cancer, 36.9% of kidney cancer, and 76.9% of thyroid cancer are females. Yet the current literature of sorafenib-triggered RRD does not reflect the gender distribution. RRD in women caused by other agents has been reported. To the best of our knowledge, this is so far the first case report of a female patient presenting sorafenib-triggered RRD. The mechanism of RRD has yet to be fully disclosed. Our case report highlights the possibility of sorafenib-triggered RRD in both genders and could provide more information. Although it is premature to make assumption about the reason behind gender distribution in reported literature, clinicians should be alert to the possibility of RRD in patients with dermatologic reaction in previously irradiated skin after receiving sorafenib.

In conclusion, radiation recall dermatitis induced by sorafenib is an unpredictable and not thoroughly understood phenomenon. The recognition of this phenomenon may aid in providing adequate and timely management.

Ethical Statement: The authors are accountable for all aspects of the work in ensuring that questions related to the accuracy or integrity of any part of the work are appropriately investigated and resolved. The patient has died and thus is unable to provide consent. Consent would be unusually burdensome to obtain from her family. We have removed all information which could possibly be used to identify the patient.