Pheochromocytomas (PCC) and paragangliomas (PGL) are rare catecholamine-secreting tumors that arise from chromaffin cells of the adrenal medulla and the sympathetic ganglia respectively. This tumor is usually located in the abdomen (98%), and more specifically in the adrenal medulla (90%) (1). This same tumor when found in extrarenal sites such as the neck, mediastinum, pelvis, and organ of Zuckerkandl is termed as PGL (2). The prevalence of PCC is increasing due to advancement in imaging technology, resulting in a high rate of incidental adrenal mass (3).

Catecholamine-secreting tumors are rare, with an estimated incidence of 0.4 to 9.5 cases per 1 million per year (4). There are approximately 500 to 1,600 new cases in the United States per year (5).

In 1886, Felix Fränkel (6,7) was the first to describe a PCC patient. He described an 18-year-old female patient who presented with fast, irregular and very shallow pulse, intermittent attacks of palpitation, anxiety, vertigo, headache, chest pain, cold sweats, and vomiting. The patient died 10 days after hospital admission. At autopsy, bilateral adrenal tumors were noted and were initially diagnosed as angiosarcomas, but later a positive chromaffin reaction confirmed PCC.

The term PCC was derived from the Greek words phaios (“dusky”), chroma (“color”), and cytoma (“tumor”). The dark staining reaction of PCC tumor was caused by the oxidation of intracellular catecholamines when stained with dichromate salts. Epinephrine and norepinephrine were later isolated from PCC in 1936 and in 1949 respectively (7).

Multiple endocrine neoplasia syndromes 2A or 2B, von Hippel-Lindau syndrome, and neurofibromatosis type I are associated with 10% of PCC tumor. Hereditary cases are usually benign; however, approximately 5% to 26% of PCC (8) and 15% to 35% of PGL are malignant in nature (2).

Malignant PCC are even rarer and very difficult to diagnose microscopically. Malignancy is diagnosed when there is presence of local invasion or metastatic disease to bones, lymph nodes, liver, lung, and brain (5). We would like to report a case of malignant PCC treated with palliative radiotherapy and chemotherapy.

The patient is a 53-year-old male Taiwanese patient married with 2 children and works as a construction worker for >20 years. The patient smokes 1PPD × 25 years; he has quitted alcohol drinking and betel nut for >10 years. The patient has been under diabetes mellitus type 2 and gout medication control for >15 years and denies any family history of cancer.

The patient suffered from lower back pain with radiation to both lower limbs was noted for years. He was treated with analgesic agent at local clinic for years, until the back pain became progressive and unbearable for 1 month. He then visited local community hospital for help. The patient was then transferred to our institution for further treatment. The patient’s vital sign on admission at 2016/7/29 showed a BP of 118/81, HR of 93/min, RR of 18/min, BT was 38 °C, pain score was 5–6, Glasgow coma scale was E4M6V5. The patient’s BP showed a paroxysmal pattern during admission, ranging from 87/53 to 226/142. Abdominal CT scan on 2016/7/26 revealed a 5.6×5.3×6.9 cm3 right adrenal heterogeneous mass (Figure 1). No metastatic regional lymph nodes were noted. Tc-99m whole body bone scan on 2016/8/15 was negative for bone metastasis. 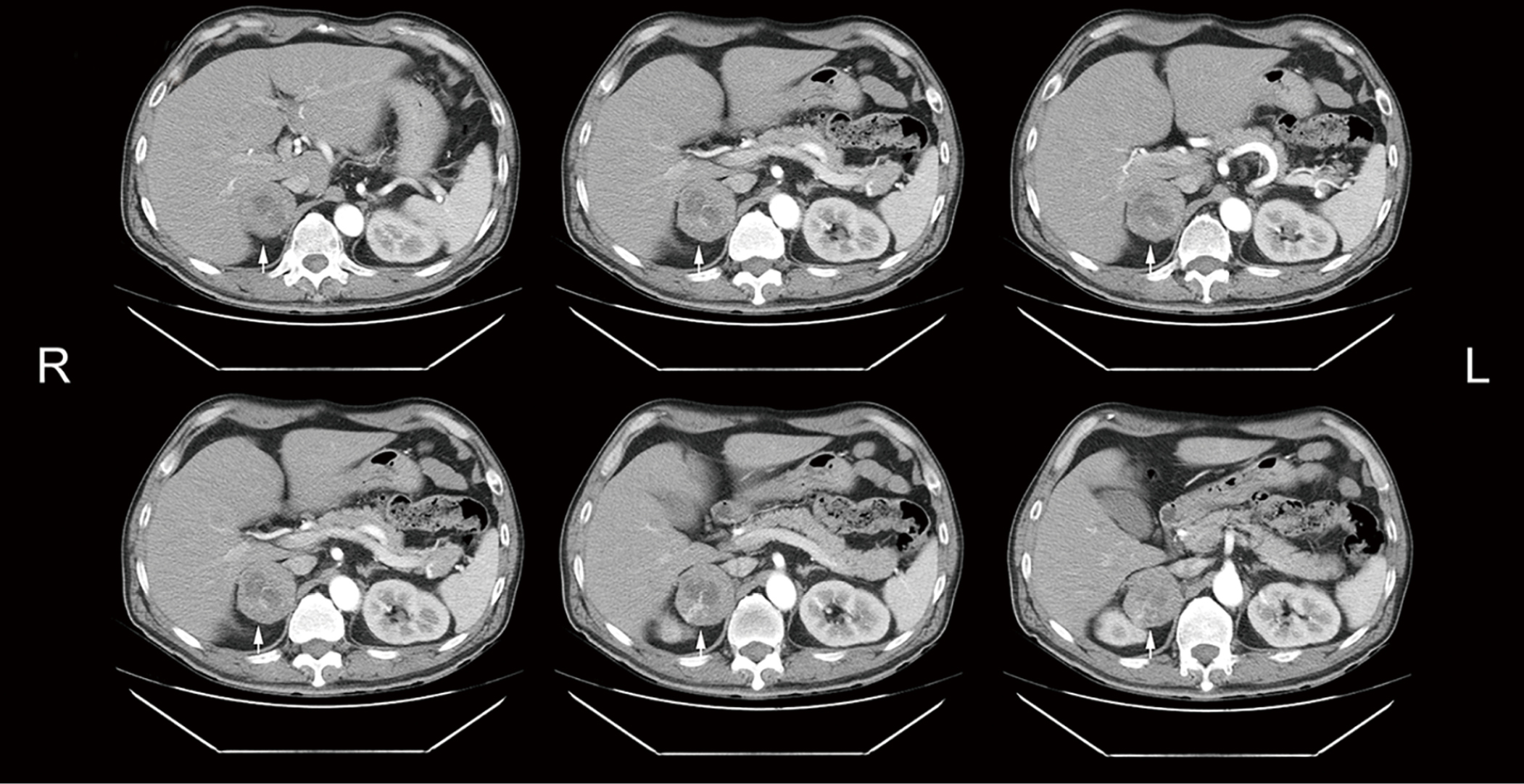 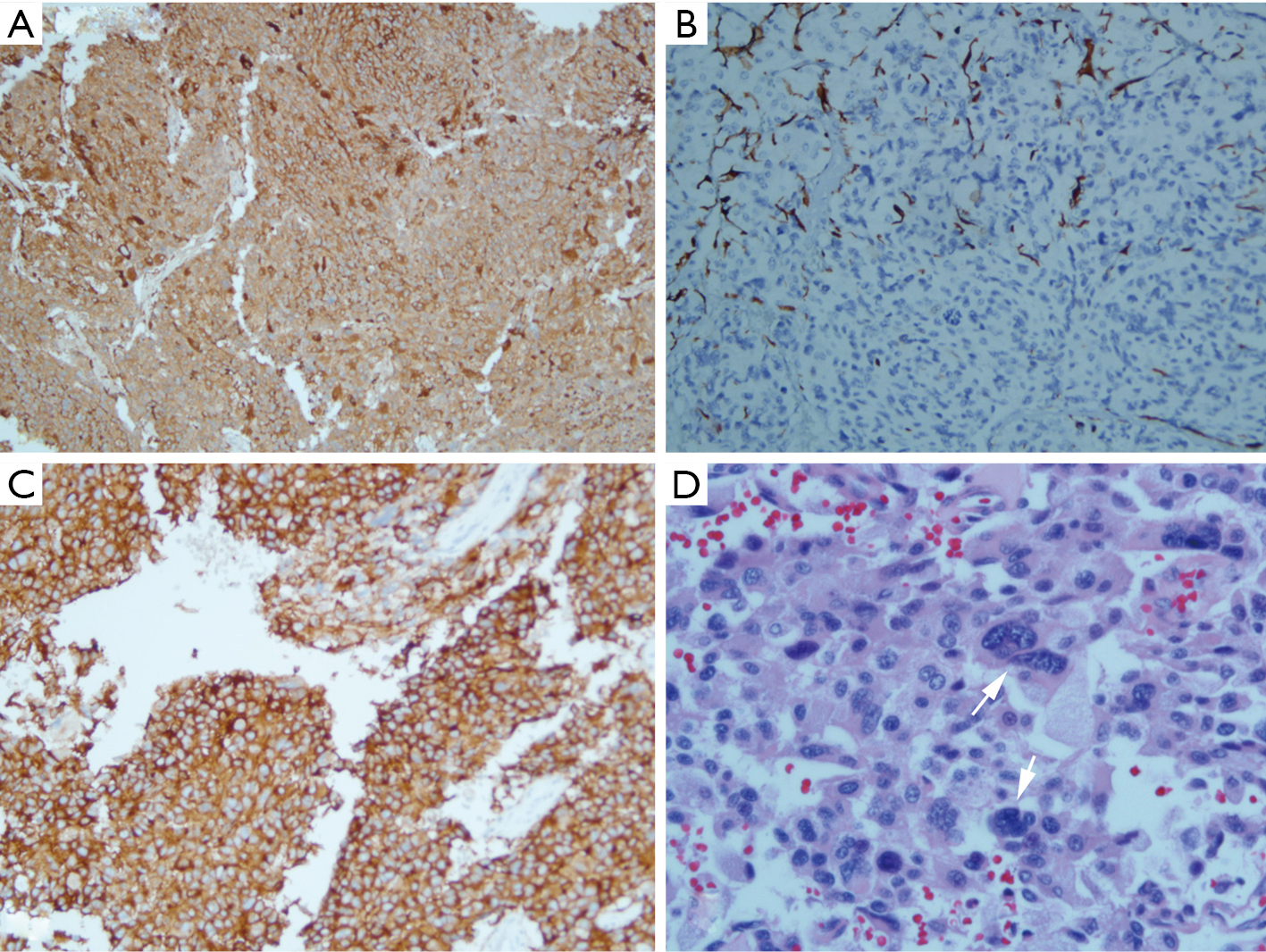 The patient remained hypertensive and hyperglycemic after surgery. Humulin insulin, oral glimepiride and metformin were given to control hyperglycemia. The final diagnosis was malignant PCC with vascular and capsular invasion. The patient’s staging is pT3N0M0, stage III (7th edition AJCC staging system). The patient’s overall PCC of the adrenal gland scales score (PASS) was 8 due to presence of capsular invasion [1], vascular invasion [1], atypical mitotic figures [2], high cellularity [2], and focal or confluent tumor necrosis [2].

The patient received postoperative sliding window intensity modulated radiotherapy (IMRT) 3 weeks after R1 resection with a Varian 21EX linear accelerator 10 MV photon beam. Based on the preoperative right adrenal gland tumor volume and location, the clinical target volume (CTV) included the right adrenal fossa, paraaortic lymph nodes, medial aspect of the upper pole of the right kidney, right crura of the diaphragm, right perirenal fat tissue, right perinephric fascia, lateral wall of inferior vena cava and the posterior surface of segment 6 of the liver. The patient was treated in a supine position and immobilized with a vacuum bag to improve the reproducibility of daily treatments. A 2D kV orthogonal imaging was done weekly to verify patient setup during radiotherapy, using a surgical clip as fiducial marker.

Radiation was given to a total dose of 50 Gy in 25 fractions in 5 weeks, the planning target volume (PTV) was determined as the CTV plus a 5 mm margin, the 95% of PTV volume was covered by the 95% of prescribed dose (Figure 4). The mean doses to organs at risk (OARs) such as the liver (13 Gy), right kidney (6 Gy), left kidney (3 Gy), spinal cord (38 Gy) and stomach (14 Gy) were within normal tissue dose constraints. The patient tolerated the whole course of radiotherapy without incurring any grade 3 or grade 4 toxicities. Lysodren (Mitotane) was given to the patient after radiotherapy as an adjuvant oral adrenal cytotoxic agent for PCC, at 2 g daily.

Unfortunately, the patient later developed bacteremia and low-grade fever on 2017/05/06; sputum culture revealed methicillin resistant Staphylococcus aureus (MRSA) infection, the patient was intubated on 2017/05/14 for severe dyspnea caused by pneumonia of both lungs. The patient was followed up regularly on an out-patient basis for medications; no tumor recurrence was noted based on ultrasound study. Unfortunately, the patient went into septic shock and expired due to cardiac arrest 10 months after diagnosis of malignant PCC.

PCC usually occurs between the third and fifth decades of life, of which 0.02–0.5% of PCC was diagnosed during a routine hypertensive workup (1). Most PCC are sporadic tumors, while 30–35% were familial benign PCC (7,9). Our patient is a sporadic case of PCC as the he does not have any family history of PCC; workup did not reveal any other neoplasia of the parathyroid, thyroid gland, pancreatic gland, renal cell carcinomas or neurofibromatosis.

Pathologic diagnosis of PCC can be made when the tumor exhibits well-circumscribed masses showing the characteristic Zellballen pattern under hematoxylin and eosin stain; these are nests of polygonal or rounded cells separated by peripheral capillaries (1,10). PCC cells should stain positive for chromogranin A and synaptophysin, as seen in Figure 3 (11). Another diagnostic criterion is the presence of sustentacular cells, stained positively with S100; these cells are seen at the periphery of Zellballen, or interspersed between tumor cells and functions as stem cells or glial-like supporting cells (10). A negative melan-A immunostaining rules out adrenal cortical adenoma (11), as was seen in our case.

The Ki-67 nuclear antigen represents a molecular marker for the proliferation potential of tumor cells. A Ki-67 index >3% connotes malignant potential (12). Our patient’s Ki-67 index was 40%, indicating a tumor with a highly malignant behavior.

Functional imaging with 131I or 123I-metaiodobenzylguanidine (MIBG) scintigraphy can also be used to evaluate PCC and PGL since MIBG has chemical similarities to norepinephrine and is concentrated in chromaffin tissue (12), but it is not available in our hospital. A careful review of the patient’s history and physical examination provided us with the initial clinical impression of PCC, whole abdomen CT scan was able to provide for a diagnostic confirmation in this patient.

Hypertension is the most common feature of PCC and PGL: it can be continuous, intermittent, and often paroxysmal in nature, patient usually exhibited a triad of severe headache, palpitations, and diaphoresis when in hypertensive crisis (12). Our patient showed a long continuous history of hypertension, with occasional hypertensive crisis that was controlled by antihypertensive medication.

A diagnostic criterion of malignant PCC is the presence of tumor invasion of adjacent structures or metastasis to sites where chromaffin tissue is normally absent such as lymph nodes, liver, lungs, and bones. Approximately 3% to 36% of PCC are malignant (9,12,13). Aggressive tumor growth is characterized by histologic features of spindle morphology, increased mitotic rate, and invasion of the organ’s capsule. (1), or tumor size ≥5 cm (8,13,14).

The PASS score based on the degree of tumor invasion, histologic growth patterns, cytologic features, or mitotic activity is used to distinguish a benign from a malignant PCC. A PASS score of <4 suggest benign lesion, a PASS score from 4 to 6 suggests an intermediate risk, while malignant PCC has a score >6 (11,12). Our patient’s PASS is 8 out of a maximum score of 20, making it a malignant PCC.

Complete surgical resection is the only curative treatment option for benign PCC and its associated hypertension. For malignant PCC, surgical debulking of the tumor and resection of distant metastases whenever possible, although not curative, is regarded as the mainstay of therapy (12).

131I-MIBG was used to treat malignant, non resectable or metastatic PCC. A single or fractionated dose ranging from 200–1,400 mCi have been used. About 60% of metastatic sites are 131I-MIBG avid and shows better responses in soft-tissue metastases than in bone metastases. However, treatment with 131I-MIBG is not curative in most patients (12). Response rate ranged from 0% to 87% (15). Unfortunately, 131I-MIBG therapy was not been available for therapeutic purpose in Taiwan.

Adjuvant external beam radiotherapy was recommended after surgical debulking of PCC, especially in patients with incomplete or R1 resection (12,16).

Siddiqui et al. (17) irradiated a recurrent PCC mass with 60Co for 30.6 Gy in 18 fractions, repeat CT scan showed shrinkage of the mass. Palliative radiotherapy for bone pain relief was also given. Chemotherapy with the cyclophosphamide, dacarbazine and vincristine was given at 3 weeks interval for 2 courses. The patient died of metastasis 12 months after diagnosis. The authors concluded that radiotherapy and chemotherapy showed good therapeutic response in malignant PCC.

Yu et al. (15) was able to reverse cranial nerve deficit due to PCC metastatic tumor in the parasellar region by giving 25 Gy, the patient suffered a local recurrence again 2 years later, and was again treated with 20 Gy, achieving prompt tumor response, the patient’s hepatic metastasis was controlled for >2 year by giving 32.4 Gy. They recommended a dose of 40–50 Gy to achieve a more long-lasting tumor control for inoperable tumor.

You et al. (18) reported a 23-year-old male patient presenting with a primary malignant PCC of the urinary bladder invading the prostate. The patient refused radical surgery and was treated with external radiotherapy for a total of 66 Gy in 30 fractions. The patient’s MRI revealed reduced tumor size, blood pressure became normal and was still alive 1.5 years after radiotherapy. You et al concluded that radiotherapy was an effective treatment to a certain extent for malignant PCC.

The overall 5-year survival for benign and malignant PCC was 90% to 96% and 34 to 72% respectively; poorer survival is associated with the presence of pulmonary metastases. (1,9). Patients with liver or lung metastases have a worse prognosis (<5 years) than patients with isolated bone lesions (1,12). Cox multivariate analysis of 287 malignant PCC between 1988 and 2009 by Goffredo et al. (14) reveals that factors associated with higher overall mortality included age 61–76 years, tumor size ≥5 cm, distant metastases, and unresectable disease necessitating palliative radiotherapy.

Malignant PCC is a rare and unusual neuroendocrine tumor seen in the clinic. Although both benign and malignant PCC have the same radiographic findings, the presence of multiple tumors and a PASS score of >6 indicate a malignant tumor. IMRT should be considered as an effective postoperative adjuvant therapy for malignant PCC, more case study is needed to clarify the role of radiotherapy for this type of tumor.

Ethical Statement: The author is accountable for all aspects of the work in ensuring that questions related to the accuracy or integrity of any part of the work are appropriately investigated and resolved. Written informed consent was obtained from the patient for publication of this manuscript and any accompanying images. A copy of the written consent is available for review by the Editor-in-Chief of this journal. The author confirms that the images in this report are from the patient’s medical record and is not derived from any previously published image.