Stereotactic radiotherapy in previously treated lung cancers—what are the risks?

Radiotherapy (RT) has a crucial role in the clinical management of non-small cell lung cancer (NSCLC) (1), being part of the first line therapeutic strategy for almost two-thirds of the patients (2). The majority of them develop recurrence which can eventually lead to fatal systemic progression; however, a significant number of these patients will experience isolated thoracic relapse, which can involve the previously irradiated site (in-field recurrence) or the remaining parenchyma and/or unirradiated mediastinal lymph nodes (out-field recurrence). This risk of local relapse increases as the prognosis of patients improves (1,3). After a previous course of RT, isolated recurrences can have different clinical presentations, including in-field relapses and/or regional recurrences in patients with locally advanced tumor previously treated with chemo-RT (30–85% of the patients shows recurrence) (1), second primary lung tumors in patients with early-stage disease, or re-treatment for patients presenting different lung metastases after previous stereotactic radiotherapy (SRT). In specific cases of isolated relapse, re-irradiation can be performed with a curative aim (4), despite the possible occurrence of treatment-related toxicity (5). More specifically, new strategies of treatment planning and dose delivery can lead to lower incidence of adverse effects, also for those patients receiving palliative therapies. Major toxic events in the setting of thoracic re-irradiation include toxicity of the lung parenchyma [radiation pneumonitis (RP)], airways and vascular damage (risk of G5 bleeding), development of fibrosis and impaired lung function. Image-guided RT (IGRT), intensity-modulated RT (IMRT) and protons may allow clinicians to deliver higher doses in few fractions safely (6-9). Further improvements of image guidance, respiratory gating and IMRT techniques have further developed the field, increasing the dosimetric performance of SBRT on large tumors, critical localizations and multiple lesions (10-12). In particular, the possibility to verify patients set-up both online and offline with IGRT, and the application of respiratory gating, has led to a reduction of the applied margin in consideration of the possible inaccuracies in patient positioning and target identification, with a decrease in the onset of side effects for thoracic radiation therapy, especially SBRT (13,14).

Despite its well-established role both for primitive and oligometastatic lung tumors (15), there are still concerns in the setting of lung re-irradiation, due to the different disease presentations and the paucity of prospective data (5,16).

We included in this review 22 published studies in the time interval 2008-2018, using a formal computer-assisted search of the Medline, Scopus and ClinicalKey databases. Keywords used were “re-irradiation”, “SBRT”, “Stereotactic body radiotherapy”, “lung cancer”, “toxicity”, “radiotherapy”. Titles and abstracts were used to screen for initial study inclusion. We included in our analysis cohort studies and case-control studies; editorials and commentaries were excluded. Patients’ characteristics, data on previous RT, dose, time interval between first and second RT course of all 22 studies are summarized in Table 1 (17-38).

In Table 2, we describe the incidence and grade of G ≥3 pulmonary toxicity, ranging from 3% to 28% (17-38). The most common adverse event was found to be radiation pneumonitis (RP), which occurred in about 20% of cases, and it was found to be related with cumulative higher doses received by the lungs. 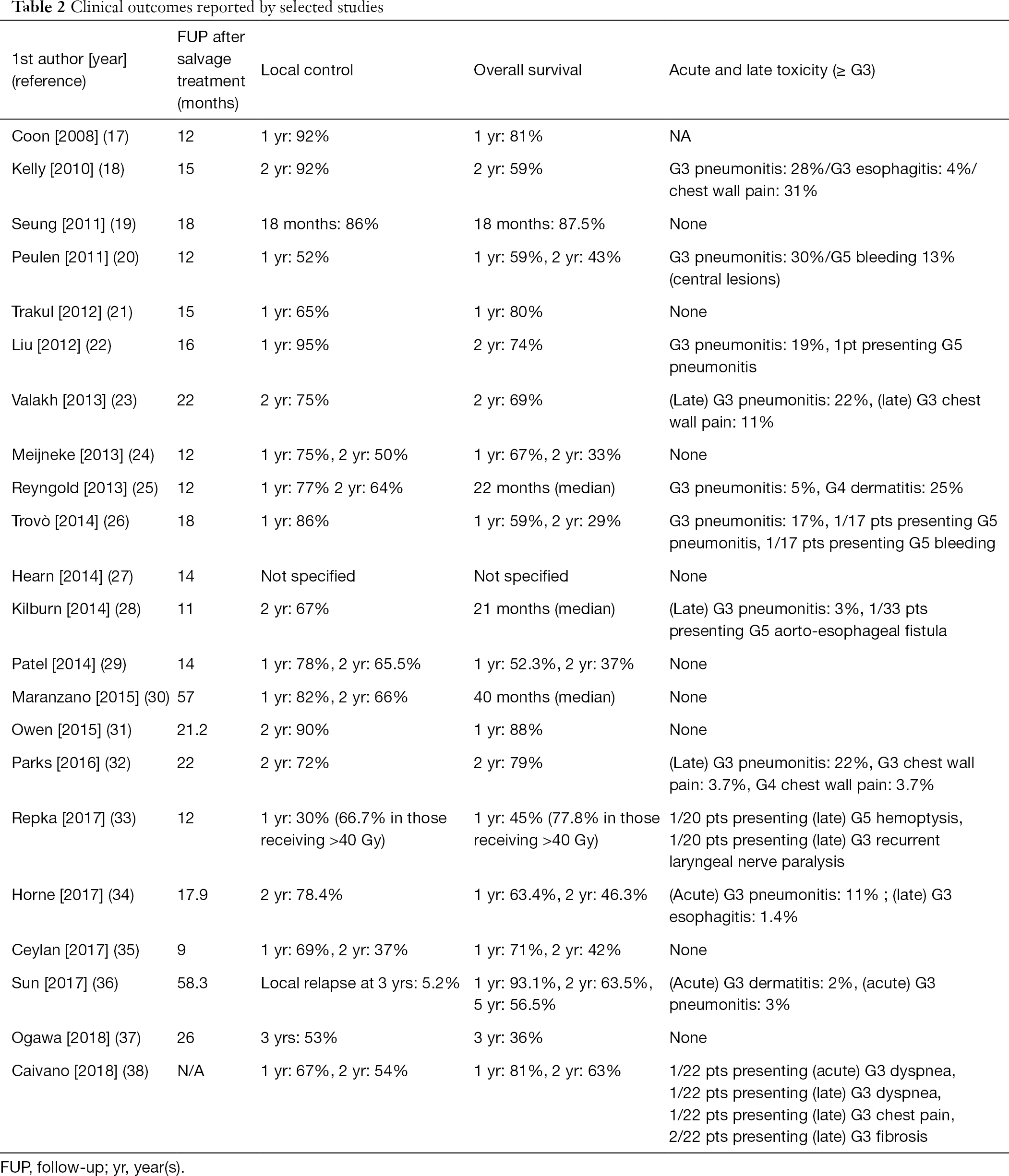 The time interval between the two RT courses, the V30Gy and V40Gy of the first RT plans and the V10Gy–V40Gy and MLD of the SRT plans seemed to be associated with the onset of G3–5 RP, even if the association does not reach statistical significance. Trovò et al. described four patients (23%) with G3 RP (needing oxygen therapy), while one patient developed G5 RP 4 months after SRT (26). Fatal G5 toxicity (bleeding) was also reported following salvage SRT for recurrent central tumors (33). More specifically, Trovò and co-authors described the case of a patient having a recurrent disease at the hilum who experienced fatal, and more likely iatrogenic, hemoptysis following SRT (26). One patient from the series by Kilburn et al. experienced grade 3 RP (28). Of note, one patient developed fatal (G5) fistula involving aorta and esophagus, after being re-irradiated for a central tumor. Kelly et al. hypothesized different adverse events between patients who received additional radiation treatment for an in-field recurrence (11 patients) and those re-irradiated after an out-of-field recurrence (13 patients) (18). The authors demonstrated a diverse pattern of side effects in these two subgroups, with chest wall pain being significantly more common in those presenting an in-field relapse (31%) and on the contrary G3 pneumonitis associated more frequently with out-field recurrence (28%). Peulen et al. described eight patients who developed G3–4 toxicity (30%), while three patients (13%) died of massive hemorrhage (G5) (20).

Liu et al. reported one case of fatal G5 RP (22). However, this patient was known for having presented chronic infectious pulmonary disease of different etiology occurring before SRT. Median MLD and V20Gy for the composite plans were 16.5 Gy and 30%, respectively; no information is available about the time interval between the two RT courses; this interval could potentially relate to the toxicity, assuming that long-lasting chronic obstructive pulmonary disease (COPD) might be responsible for a poorer pulmonary function.

Unexpectedly, Trovò et al. demonstrated a significant correlation between the risk of developing severe pneumonitis and the maximum heart dose (Dmax) and the minimum dose to at least 5% and 10% of the heart volume (D5Gy and D10Gy, respectively) (26). More specifically, patients with severe pulmonary toxicity showed higher values of Dmax (mean value of 27 vs. 13.3 Gy in patients without toxicity), D5vol (mean value of 10.2 vs. 3.9 Gy), and D10vol (mean value of 7.1 vs. 2.8 Gy) to the heart. Table 3, derived from the study by Liu et al. (22), provides a predictive score for RP on the basis of few clinical-dosimetric parameters.

While we still do not have mature data concerning the impact of SBRT re-irradiation on heart toxicity, plenty of studies have been evaluating heart dose in lung cancer patients. RTOG 0617 is a landmark study published in 2015 which showed a significant relationship between high heart dose and survival decrease (39). A prospective trial from Lee et al. (40) demonstrated an association between increased RT prescription dose and increased late toxicity (myocardial infarction, pericarditis, pericardial effusion) in patients with stage III NSCLC undergoing high-dose thoracic radiation in combination with chemotherapy. In their analysis on 125 patients included in prospective trials at Ann Arbor University (41), Dess et al. found a relative 7% increase in G3–5 cardiac toxicity per Gy in mean heart dose (MHD); this subgroup of patients had decreased overall survival. Specific constraints on cumulative heart dose given with hypofractionated RT after a first fractionated RT course are not available, but the LQ formalism might be used to estimate the dose according to widely used dose limits. In general, patients receiving high MHD or high cumulative doses to a portion of the heart may benefit from long-term cardiologic follow-up and should minimize cardiovascular risk factors.

A careful dosimetric analysis of the analyzed publications could be useful to define dose limits for organs at risk in the RT planning. However, only a few studies provide a definition of planning target volume (PTV) and add information about the used dosimetric constraints. Table 4 give detailed information concerning volumes and planning. We report a few cases of G5 fatal toxicities; dose values obtained with the Linear-Quadratic formalism are used, when available, to gather cumulative doses to organs at risk (42). Peulen et al. reported on three iatrogenic deaths for massive hemorrhage. One of them received 30 Gy in 3 fractions (CTV =114 cm3, EQD2 =78 Gy) and was re-irradiated with SRT receiving 45 Gy in 3 fractions (CTV =77 cm3, EQD2 =162 Gy), with a time interval of 12 months between the two RT courses. The total EQD2 value was 240 Gy (alpha/beta for lung =3 Gy), and fatal bleeding was reported at 11 months from re-treatment (20). A schedule of 40 Gy in 4 fractions (CTV right hilar region =12 cm3, EQD2 =104 Gy) was delivered to a patient diagnosed with metastatic renal cell carcinoma and presenting with metastases at both right and left hilum. After three years, a re-treatment with five fractions of 8 Gy (CTV =37 cm3, EQD2 =88 Gy) was given for a tumor recurrence in the proximity of the right hilus. The patient developed different G3 adverse events (pneumonitis, cough, dyspnoea, and pain) at three months after re-treatment, and later he developed a stenosis of the right and left lower lobe bronchus after 9 months, and ultimately he died from acute hemoptysis (cumulated EQD2 to the right hilus 192 Gy with alfa/beta 3 Gy). The last patients received 40 Gy in four fractions for stage III NSCLC of the left hilus (EQD2 =104 Gy). After 13 months, the hilar lesion received re-irradiation with 33 Gy in 3 fractions (CTV =58 cm3, EQD2 =92 Gy), followed by death six weeks later for massive bleeding in the upper pulmonary area (cumulated EQD2 196 Gy with alfa/beta =3). Concerning oesophageal toxicity, Kilburn et al. described one case of G5 aorta-oesophageal fistula occurring six months after re-irradiation of a central tumor (28) with 54 Gy in 3 fractions in a patient who had previously received radio-chemotherapy (74 Gy, 2 Gy/fraction, one year before). As reported by the Authors, a rough estimation of the composite doses: Dmax to esophagus was 66 Gy from the fractionated radiation given with concurrent chemotherapy and 20.5 Gy in 3 fractions for salvage SABR plan (EQD2: 40.3 Gy, alpha/beta =3 Gy). Finally, re-treatment of the primary centrally located tumor resulted in a total combined maximum oesophageal dose of approximately 106 Gy. Table 5 provides details on the dose constraints used among the 22 studies included in the analysis, when available. 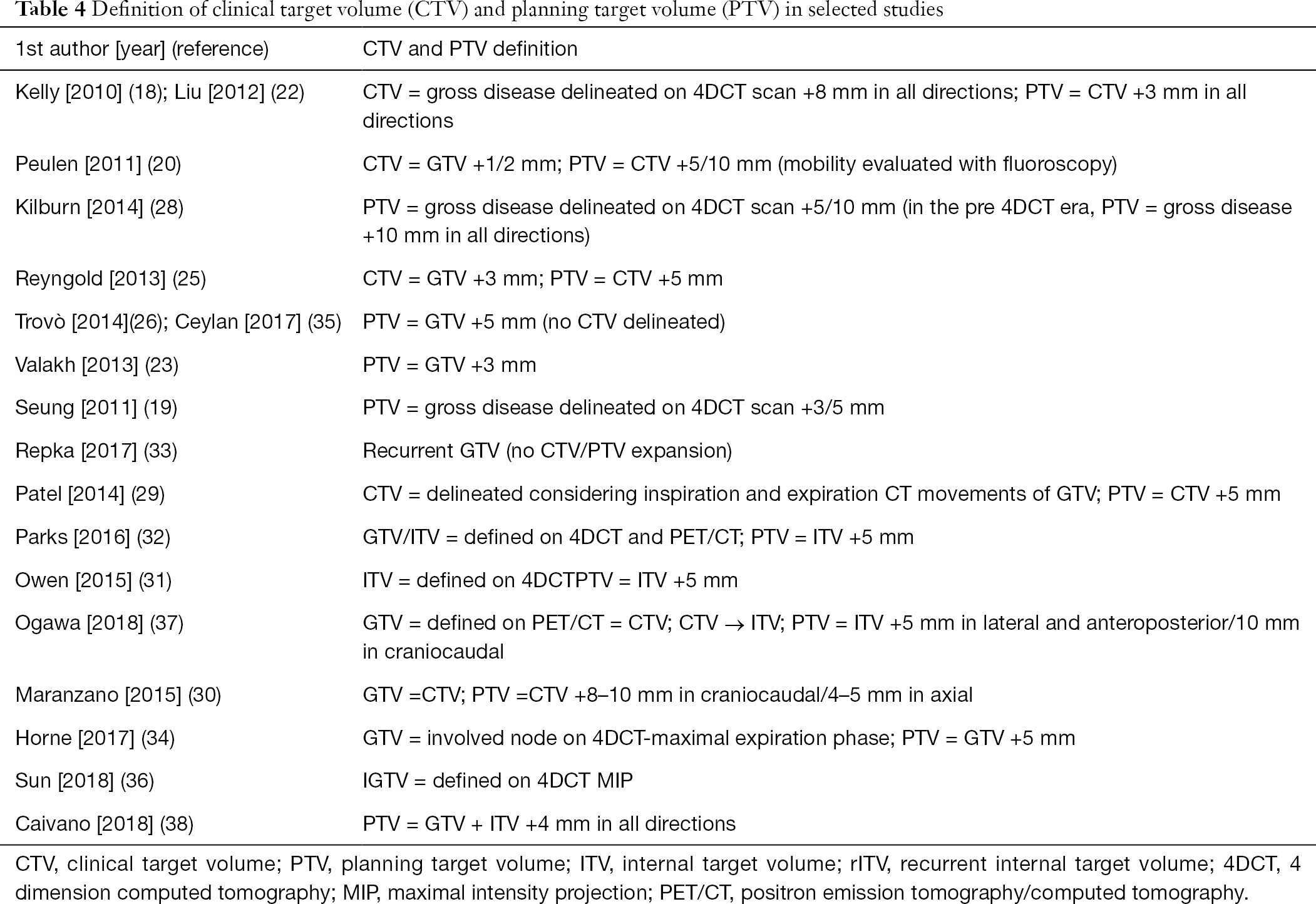 In this article, we review literature data on thoracic re-irradiation with SRT for recurrent lung cancer and/or lung metastases following a previous thoracic RT course. We analyzed 22 full-text articles published over the last decade. The number of patients per study is often limited, with a small number of enrolled patients and typical biases of retrospective studies are present. Schedules of salvage SRT largely vary between different studies, with treatment fractions ranging from one to five, and total doses between 20 and 60 Gy. Heterogeneous criteria were used to define treatment volumes (Table 4).

Furthermore, cumulative doses are reported only in some studies. These limitations and the need for a clear definition of the cumulative biologically equivalent doses (usually EQD2) should be taken into account when interpreting the results. Information about PTV volumes is scarce: this lack of data is detrimental in the evaluation of toxicity rates and, consequently, for the selection of patients who would most benefit from re-irradiation. Overall, re-irradiation with fractionated SRT was shown to be relatively safe in terms of RP risk. However, severe RP was commonly reported (nearly 20% of the cases, more than after palliative conventional RT) and showed association with dosimetric and patient-related risk factors (ECOG PS 2–3, FEV1 <65%, tumor location) (22). The reported incidence is widely variable between different reports, but generally, particular caution should be paid before re-irradiate patients at higher risk of developing side effects. Toxic deaths after high-dose re-irradiation to the structures included in the mediastinum (central airways, great vessels) are reported, with cases of fatal bronchial bleeding and/or fistulae (26,28) as well as occasionally fatal lung hemorrhage after high-dose irradiation to non-central lesions. These events seem to be related to very high prescription doses. Given the current acknowledgment on radiation dose constraints to central structures when high-dose hypo-fractionation is adopted (43), the occurrence of G5 events should now be sporadic. Feddock et al. have reported an unusually high rate of toxicity in a prospective study analyzing SRT as a boost after standard chemoradiation in stage II–III NSCLC (not true re-irradiation) (44). Such boost consisted of 10 Gy in 2 fractions (20 Gy total). After having enrolled 16 patients, the protocol was amended for the risk of inducing significant side effects in patients with central tumors, with two patients having developed fatal pulmonary hemorrhage after being treated for a medial tumor.

In conclusion, in the setting of lung re-irradiation, a careful evaluation of patients at higher risk for RP is mandatory and, as long as central re-irradiation carries substantial risks of high-grade toxicity, special attention should be paid.

Conflicts of Interest: Dr. AR Filippi (speakers’ bureau, advisory board: Astra Zeneca). The other authors have no conflicts of interest to declare.