Solitary plasmacytoma of bone over sacrum: a case report

A 46-year-old man visited our hospital due to lower back pain for 3 months. His past medical history included only hypertension without any trauma. The pain, which radiated to his lower limbs, was accompanied by numbness. The aggravating factors of the pain were prolonged standing and sitting. He could not bear ambulation for long periods due to intermittent claudication. Body weight loss of about 12 kg in 3 months was also noted. There was no urine or fecal incontinence. L-spine and pelvic magnetic resonance imaging (MRI) scan was arranged and revealed a large tumor (8.8 cm × 6.2 cm) over the sacrum. The occupying lesion over the pelvis involved the sacrum (S2 to S4), with hypointensity on both T1-weighted and T2-weighted images. It was homogeneously contrast enhanced (Figure 1A,B,C). He then received surgical intervention with partial tumor removal on May 31, 2016. Pathology report showed plasmacytoma from sacrum bone and soft tissue. Diffuse plasmacytoid cells with eccentric nuclei were found in the soft tissue with bony invasion. Immunohistochemical study demonstrated cytokeratins (CK) (−), Cluster of Differentiation (CD) 138 (+), Kappa light chain (−), Lambda light chain (+), and CD 20 (−) for tumor cells (Figures 2-4). β2 microglobulin, after tumor excision, was 3270 nanograms per milliliter. 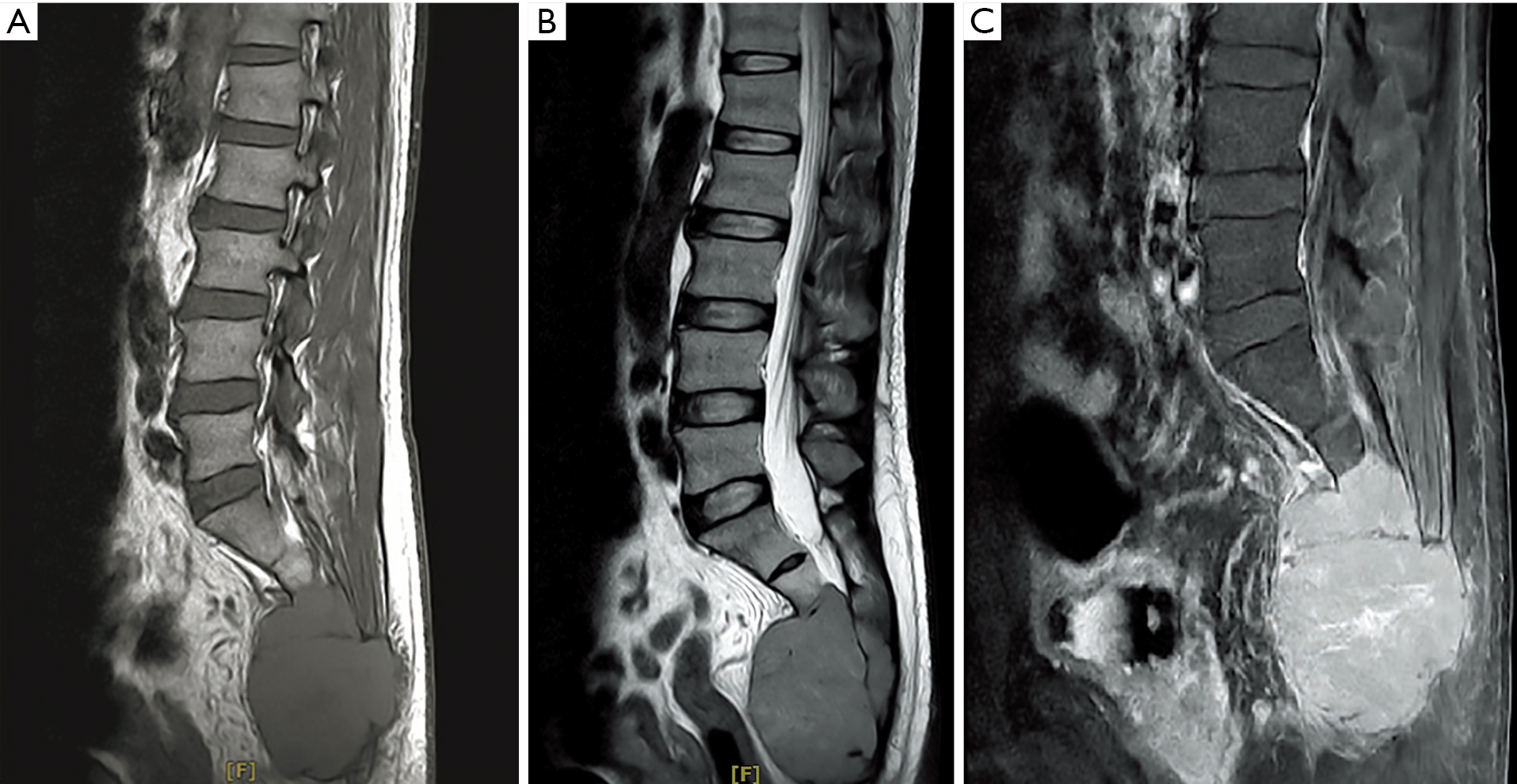 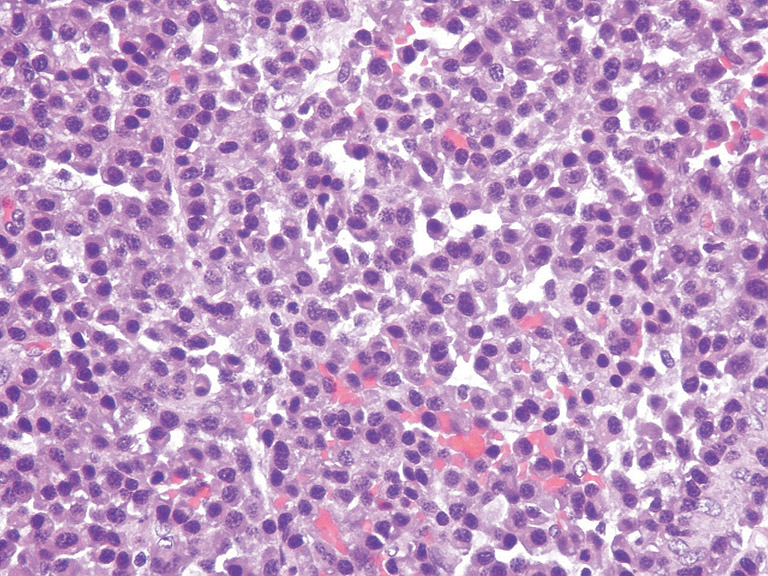 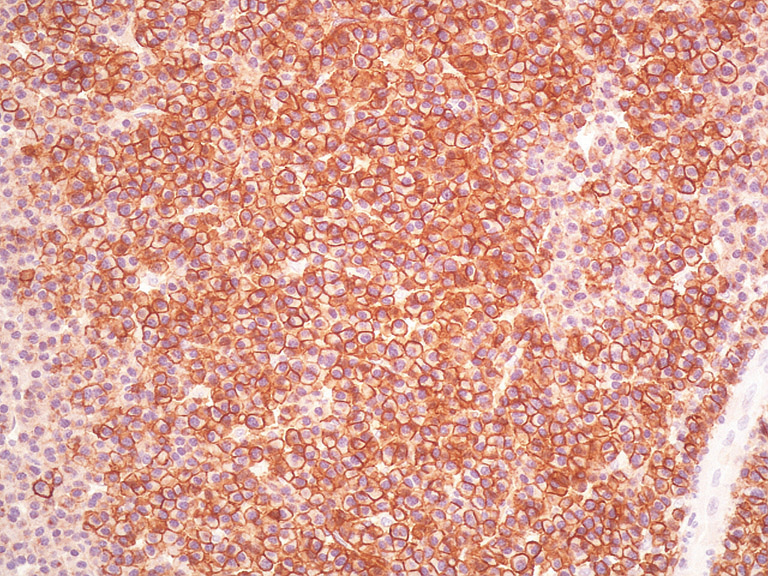 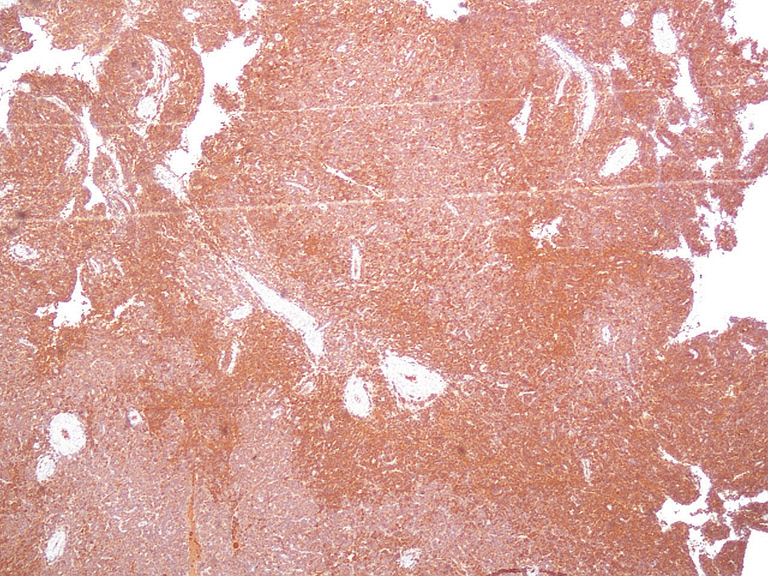 Under the diagnosis of SPB, partial tumor removal and adjuvant radiotherapy were arranged. Computed tomography (CT)-simulation was performed on June 13, 2016. A series of 5-mm-slice contrast-enhanced CT images was acquired with a CT simulator. The CT images were transferred to the planning system for target delineation. To account for set-up error, planning target volume (PTV) included a 5-millimeter margin around the clinical target volume (CTV). Six megavoltage (MV) photon with volumetric modulated arc therapy (VMAT) technique was used. The prescribed dose was 50 grays (Gy) in 2 Gy daily fractions to PTV. Treatment was administered 5 days per week, for a total of 25 fractions. VMAT was optimized to cover 100% of the PTV with 100% of the prescribed dose. Due to dose constraint of rectum, rectal dose was adjusted to 45 Gy, which was 12% less than 50 Gy. Radiotherapy was started on post-operation day 20 (from June 20, 2016 to July 22, 2016) (Figures 5,6). After treatment, the patient experienced no acute reactions. Neither dermatitis nor gastrointestinal discomfort was noted. 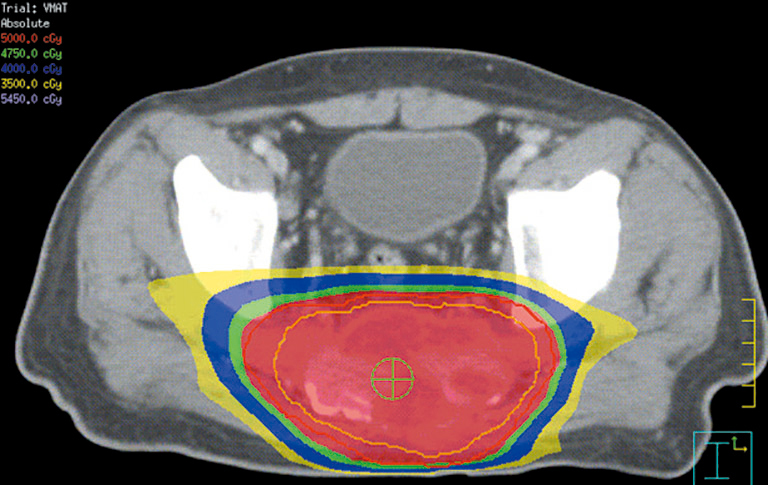 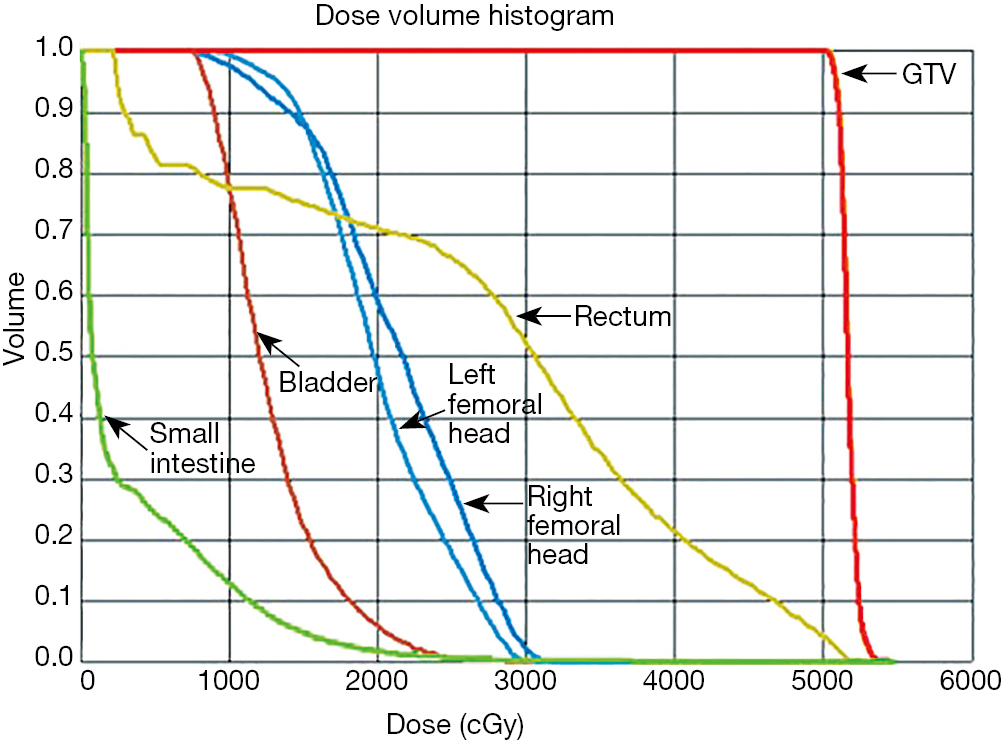 Figure 6 This is the dose volume histogram of the radiotherapy plan. The red line on the right shows the total dose of 50 Gy to GTV, and it achieves 100% dose coverage. The V45 of rectum is lower than 12%.

After completion of radiotherapy, the patient was followed up for 24 months until July 2018. Pelvic CT was performed every 3 months, which showed contrast-enhancing soft tissue density lesion in sacrum, with decreasing solid and cystic components (Figure 7A,B,C). No newly-developed lesion was noted. β2 microglobulin level was in the normal range during the follow-up period. No distant metastasis or newly diagnosed multiple myeloma was noted. His reported quality of life was satisfactory, and his lower back pain improved with no intermittent claudication. 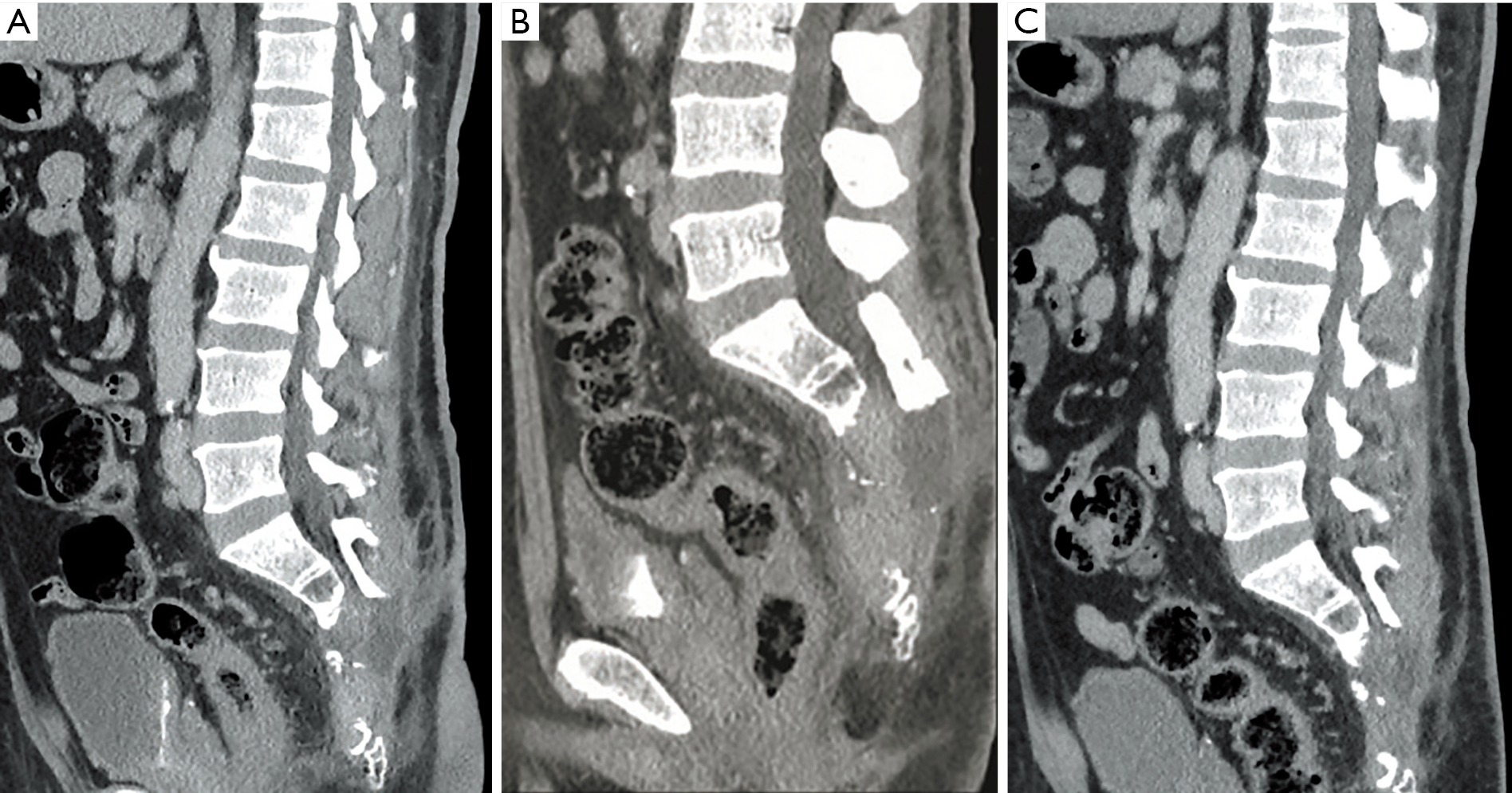 SPB is also called osseous plasmacytoma. It is one type of solitary plasmacytoma. SPB mostly occurs in axial skeleton, vertebral bodies and the skull (1,2). SPBs occur more frequently in males, and the male-to-female ratio is about 2:1. The median age of patients with SPB is around 55 years, which is about 10 years lower than that of patients with multiple myeloma (3). The incidence of SPB is approximately 3.5 per 1 million (4). A review of the literature provides incidences of SPB for different ethnic groups. However, data on the Asian population is lacking. Only on study conducted in Taiwan shows that the incidence of SPB is 6.2% among all plasma neoplasms (1). M protein, which is a monoclonal paraprotein, was found to be a poor prognostic factor if it existed for more than one year and was associated with development of multiple myeloma within 2.2 years with or without treatment (5).

The diagnosis of SPB requires biopsy-proven solitary tumor of bone with evidence of clonal plasma cells in single area of bone and without additional lesions of spine on MRI. The pathologic immunohistochemical study may be CD 138 and lambda light chain positive. There should be no evidence of systemic myeloma, such as anemia, hypercalcemia or renal function impairment (6). Moreover, there should be no monoclonal plasma cells in bone marrow aspirate, serum or urine (3).

SPB has a high risk of progression to multiple myeloma. The primary treatment is localized radiation therapy to avoid this progression, which occurs in 50% of cases within 5 years, 65–84% in 10 years, and 65–100% in 15 years (4,6). The optimal therapy for SPB should aim to achieve long-term local control with minimal morbidity of multiple myeloma. Definitive local radiotherapy could provide fabulous local control, may translate into a persistent remission and even cure. In our case, a long term follow up 5 to 10 years is still needed.

Surgery is not the first choice for the treatment of SPB, except if there is structural instability of the bone, retropulsed bone, or rapidly progressive symptoms from cord compression (9). Tsutsumi et al. presented four patients with solitary spinal extradural plasmacytoma who received tumor resection, and the results showed neurological symptom improvement (10). Total en bloc spondylectomy also resulted in clinical improvements, but an experienced team was required. Kadokura et al. presented a patient with left back pain. Radiological evaluation revealed a chest wall tumor (11). CT-guided biopsy was performed and pathology report showed SPB. Preoperative radiotherapy at a dose of 40 Gy was administered to the tumor. Afterward, he underwent complete resection of the tumor. Adjuvant chemotherapy with melphalan and prednisolone was given. During a 2-year follow-up, there was no tumor recurrence. Kumar et al. reported a patient presenting with headache on the right side for three months (12). Brain MRI demonstrated an osseous lesion (32 mm × 16 mm) along the posterior cranial fossa, involving the right petrous temporal bone. Treatment methods included right retromastoid suboccipital craniotomy and subtotal excision of the tumor. Histopathology revealed plasmacytoma and positive CD 138. The final diagnosis was SPB of right temporal bone. Adjuvant radiotherapy to the tumor was given at a dose of 50 Gy in 25 fractions. During a 2-year follow-up, there was no evidence of tumor recurrence.

Many retrospective studies have included only small numbers of patients, due to the low prevalence of SPB (6) (Table 1). The standard treatment is definitive local radiotherapy. In the treatment field, using MRI to define GTV is recommended. The strengths of MRI are high soft tissue contrast and multiplanar imaging. CT scan should also be conducted to detect bone abnormality. Thus, the treatment field should be determined by comparing both CT image and MRI. However, the treatment field for planning remains controversial. Some authors have suggested including whole bone in the radiation field to avoid marginal recurrence, while others have recommended that only part of the bone be included. For CTV, we encompassed at least 1.5–2 cm margin on MRI, with 5–10 mm margin for PTV. Some authors have suggested a dose of 40–50 Gy for smaller lesions (<5 cm) and >50 Gy for larger lesions (>5 cm) (2,3). Suh et al. suggested doses of <35 Gy for lesions <5 cm and 40–50 Gy for larger lesions (>5 cm) (16). In a multicenter Rare Cancer Network study, 258 patients with bone (n=206) and extramedullary (n=52) SPB were treated at the Princess Margaret Hospital. They found no dose-response relationship for doses >30 Gy, even for larger tumors (10). In our case, we chose a dose of 50 Gy in 25 fractions due to the large tumor size (8.8 cm × 6.2 cm).

Table 1 Past studies on solitary plasmacytoma of bone
Full table

Use of adjuvant chemotherapy is controversial. In some studies, adjuvant chemotherapy has revealed no benefit in terms of disease control or prevention of progression to multiple myeloma (1,6). In one prospective study, a benefit of combined treatment using local radiotherapy with doses ranging from 40–50 Gy (28 patients) followed by melphalan and prednisone every 6 weeks for 3 years was demonstrated compared to radiotherapy alone (25 patients) (17). After a median follow-up of 8.9 years, disease free survival and overall survival improved in patients treated with combined therapy. Moreover, 22 patients remained alive and free of disease in the combined treatment group compared to only 13 patients in the radiotherapy alone group (P<0.01). Another retrospective study showed that melphalan-based chemotherapy can prevent multiple myeloma development. Patients who are not responsive to radiotherapy can be treated with chemotherapy, with a similar approach to that used in the treatment of multiple myeloma (18). However, some studies have reported no benefit for adjuvant chemotherapy. Moreover, a Greek myeloma study group showed that the addition of chemotherapy increases toxicity without offering any survival advantage over radiotherapy (11).

In conclusion, radiotherapy is the main treatment for SPB. Surgery is recommended when there is structural instability of the bone or rapidly progressive symptoms from cord compression. There is no sufficient evidence to suggest use of adjuvant chemotherapy for SPB (3). Further studies are needed to determine the effects of surgery and chemotherapy.