The general goal of whole breast radiation therapy is to deliver a uniform dose to the irradiated area and avoid treatment-related toxicities (1-9). Traditionally, this is done by using opposed tangential fields with wedges to improve dose homogeneity. Several techniques have been reported on optimizing individual beam segments based on tangential beams to achieve such a goal (8,10-12). Pros and cons of these techniques have been studied (5,8,13-15). The major advantage of these techniques is the improved dosimetry and the major concerns include increased planning effort and workflow efficiency. For routine clinical practice, a recent study has advocated the use of 3D conformal techniques over intensity-modulated beams as the first-line treatment of the whole breast due to equivalence in observed acute toxicities (16). As a result, some high-volume clinical centers in the world continue to adopt the workflow of 3D conformal treatments for the whole breast treatment.

When dealing with acute skin toxicities for consideration of adopting hypofractionated treatments involving shortened treatment course and increased fractional dose (17-21), large breast size has been reported to contribute to increased skin toxicities (22,23). For such patients, 3D conformal treatment has become challenging to avoid focal skin toxicities in critical areas. In particular, significant isodose hot spots tend to occur in multiple areas toward the inferior portion of the breast. This has raised the concern for focal skin toxicities near the inframammary sulcus where quality of life of the patients can be severely affected due to sensitivity of the area.

With an open field contribution, we hypothesize that the total number of segments for the modulated fields would remain adequate in order to match the treatment delivery efficiency of 3D conformal treatments despite higher fractional dose required for hypofractionated treatments. Maintaining a high delivery efficiency not only improves patient throughputs but also minimizes treatment setup uncertainties. The goal of our study is therefore to investigate whether such a mixed beam technique would achieve high efficient delivery while improving the dose uniformity especially to the inframammary fold area for large breasted patients.

Six patient cases with the planning target volume ranging from 1,350 to 4,202 cc and separation >25 cm were selected and tested for the technique. All cases were anonymized prior to the selection and they were retrospectively re-planned for a fractional dose of 266 cGy intended for a course of 15 or 16 fractions of treatment. As standard practice, all patients underwent thin-cut CT scan with the breast board and an aquaplast chest mask immobilizing the whole breast. Following the standard clinical practice, the initial tangential fields were placed via virtual simulation using a commercial treatment planning system (Pinnacle version 9, Philips Medical Solutions, OH). The tangential fields were placed to align with the medial and lateral markers placed on the chest to mark the field edges. For all cases, a 2-cm skin-flashing margin was added beyond the skin surface. The isocenter of all the fields was placed inside the breast and 1–2 cm from the lung interface and halfway between the superior and inferior border. The whole breast volume was contoured via the auto-contouring tool of the treatment planning system. In order to constrain the dose to the inframammary region for the current study, a partial constraining volume starting from the inferior border extending approximately 4 cm superiorly was contoured and the dose volume constraints were imposed on the area.

An automated script was programmed to streamline the planning process: the script first sets equal beam weights for the tangential fields. Then the maximum dose from the open-field was calculated. The monitor units for each beam were then scaled down by a constant factor (e.g., 0.6–0.8). As a starting value, the scaling factor was set to the inverse of maximum percentage dose of the open field contribution. For example, if the maximum percentage dose for the open field is 130%, then the scaling factor is set to 0.77 (i.e., 1/130%) for subsequent planning optimizations.

After scaling down the monitor units, two additional tangential fields of the same setup were added, and beam optimization was performed on these two fields based on the dose volume constraints of the whole breast, the partial inframammary fold region, the lung and the heart (left-sided treatment only). During the inverse planning optimization, the dose distribution from the open field is locked for the two open tangential fields, i.e., the intensity modulated beam optimization was performed over the background dose of the open tangential fields. Afterward, the contribution from the open field was iteratively adjusted and the above steps were repeated to achieve an optimal treatment plan.

In addition, the dose volume constraints for the lung and to the heart (for left-sided breast case) are given as follows: (I) the maximum percentage volume of the ipsilateral lung receiving >75% of the prescription is less than 5%; (II) the maximum percentage volume of the heart receiving >75% of the prescription dose is less than 2%.

In general, the entire planning process took about 1 minute to complete with the optimization yielding a total number of beam segments on the order of 10–30 for a given case. For each patient case, treatment plans were then benchmarked against the conventional wedge pair (WP) technique for a high-volume clinical setting, where the treatment time was limited to 10 minutes or less per treatment session.

Figure 1 compares the dose distributions of the combined open and modulated beams versus the standard WP technique. From the results of Figure 1, the dose uniformity was significantly improved especially near the inferior and the superior part of the breast. The dose hot spots at the inframammary sulcus were significantly reduced: the 115% isodose line was not visible in Figure 1B where a significant portion of the breast volume was enclosed as shown in Figure 1A. The dose conformity, i.e., the separation between the isodose lines, as well as the lung dose was also improved for the mixed-beam approach.

The dose volume histogram for the case is given in Figure 2. From the results of Figure 2, the overall plan quality is improved for the mixed beam approach versus the WP technique. For example, the dose hot spots such as the whole breast volume enclosed by the 105% isodose line were reduced by 58.9%. The dose coverage to the whole breast is equivalent between the two approaches. However, the dose near the inframammary sulcus region was all less than 105% for the mixed-beam approach. The total number of beam segments was 15 and the entire delivery was estimated to take about 6 minutes to complete for the mixed beam approach with 1.1 min beam-on time for a machine output of 600 MU/min and an estimated treatment setup time of 5 minutes.

Figure 2 Dose volume histogram for the mixed beam approach compared with the standard wedge pair technique. Note significant differences for the whole breast and the lung.

The results of all the studied cases are summarized in Table 1. From the results shown in Table 1, the mixed-beam approach significantly improves the dose uniformity for all the cases compared to the WP technique: the mean dose hot spot volume enclosed by the 105% prescription isodose line decreased from 54% to 24%; the maximum dose to the inframammary sulcus area also decreased significantly from 116% to 104% based on the P value of 0.006 from the two-tailed paired student t-test. Small decrease (~0.5–4%) in the D20 to the lung (P=0.03) was also noted. However, the P values were not statistically significant for the mean lung dose (P=0.09) and D50 heart dose (P=0.053).

Table 1 Summary of the patient cases treated with intensity mixed beam (IMB) technique as compared with standard wedge-pair (WP) technique: V105% denotes target volume receiving at least 105% of the prescription dose, lung Dmean and D20 denote the mean lung dose and the dose to at least 20% of the lung expressed in percentage of the prescription dose, heart D50 denotes the dose to at least 50% of the heart volume, IMF Dmax denotes the maximum dose at the inframammary fold (IMF) region
Full table 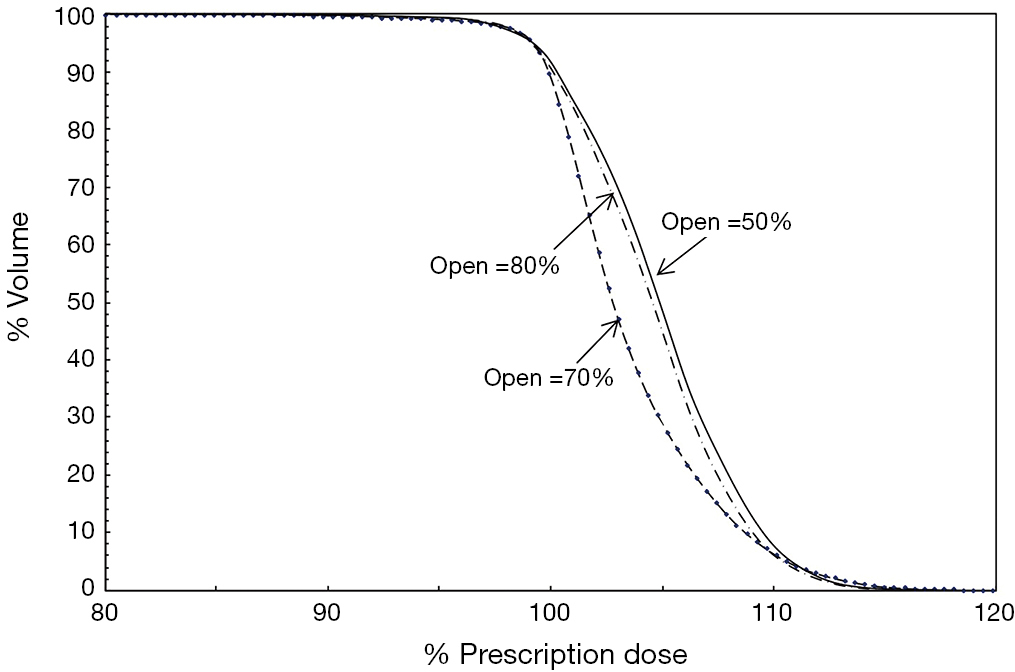 Figure 3 The effect of the scaling factor values on the target dose uniformity for the mixed open field and the intensity modulated field approach.

A simple and efficient technique compatible with 3D conformal treatment workflow has been developed for hypofractionated whole breast radiation therapy. For proof of concept, highly uniform dose (<5%) toward the inframammary area was realized with the technique for six complex breast treatment cases.

The major strength of the technique is its targeted area dose sparing capability in conjunction with its high delivery efficiency that rivals 3D conformal WP treatment. This result is also supported by studies of similar techniques for conventional whole breast treatment (24,25). One major distinction of our technique is that it explicitly varied the open field contribution to optimize the intensity modulated fields leading to approximately 30% to 50% of its contribution to eliminate dose hot spots specific to the inframammary fold area. Another strength of this technique is the simplicity of the planning process. The use of a standard script minimizes the additional planning time required.

Informed Consent: No informed consent was obtained from the patients as the data was based on anonymized retrospective records. De-identified data were obtained for the study.