Role of radiotherapy in heterotopic ossification: a case report and literature review

Heterotopic ossification (HO), the process of abnormal bone formation in non-osseous tissue, was first described by Riedel and was later reported by Dejerine and Ceillier in 1918 during World War I (1). Although it can develop at any site including the elbows, shoulders, knees, or other soft tissues associated with joints, the hip is the most common site of involvement (2,3). HO may limit the range of motion of joints and lead to stiffness, although a few patients might be diagnosed based only on radiographic findings in the absence of major clinical symptoms (3,4). Brooker et al. developed a classification for the assessment of HO, which is the most commonly used system globally (Table 1) (2). No specific etiological contributors have been identified in patients with HO; however, previous studies suggest the potential role of previous ipsilateral or contralateral HO, ankylosing spondylitis, hypertrophic osteoarthritis, spinal cord injury, or hereditary diseases as possible risk factors associated with this condition (3,4).

The incidence of HO found by radiographic images after hip arthroscopy ranges from 4.7% to 44% (5,6). Karunakar et al. reported that 37 (57.8%) of 64 patients with displaced fractures of the acetabulum exposed through a Kocher-Langenbeck approach had HO at 12 weeks after operation (7). The incidence of HO after hip arthroplasty is reported even up to 92% for patients who have a previous history of HO formation on the opposite side (8). Clinically, the incidence of significant HO (Brooker classification; grade III or grade IV with symptoms) following total hip replacement varies from 3% to 7% (9). Although non-steroidal anti-inflammatory drugs (NSAIDs) can be used as prophylactic agents against HO (10,11), these medications are contraindicated in patients with peptic ulcer, renal failure, or other comorbidities. Radiotherapy (RT) is an alternative treatment modality aimed at reducing the postoperative risk of development of HO (12). HO is a rare condition; thus, no globally accepted guidelines have been established for its management, and the dose and timing of the RT schedule/regimen vary among different hospitals/centers. We report a patient with HO who underwent adjuvant RT after the surgical resection. We also present a review of the literature describing clinical outcomes in patients with HO who receive variable RT regimens (variable doses and fractionations). 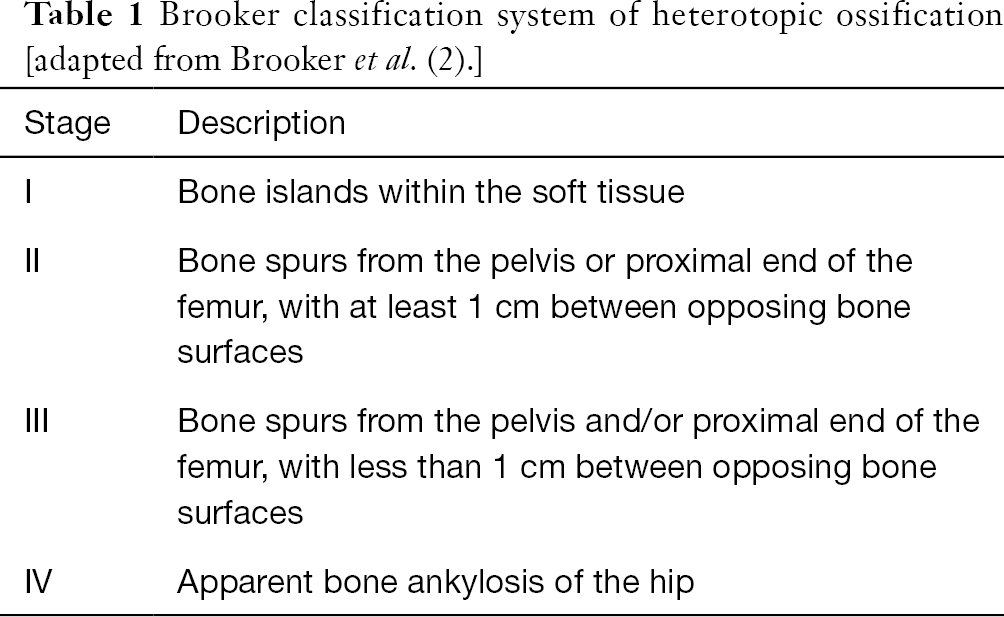 Figure 2 Preoperative computed tomography scan in a patient with heterotopic ossification showing (A) axial view and (B) coronal view demonstrating large ossified lesions at the left hip joint with compression of the adjacent soft tissue.

A 52-year-old woman presented to our clinic with a 1-year history of progressive stiffness of her left hip. She reported history of hypertension, diabetes mellitus, and peptic ulcer, which were all controlled with regular medication intake. She also reported history of an old cerebrovascular accident 7 years prior to presentation, with residual left hemiplegia. She underwent T11–12 vertebroplasty secondary to compression fractures 3 years prior to presentation. Because she was bed-ridden, she resided in a nursing home and received regular rehabilitation therapy. During passive stretching exercise, she was observed to have developed limited motion of left hip flexion over a year prior to presentation. Following an episode of hydrocephalus with a decline in cognitive function, she underwent the placement of a ventriculoperitoneal shunt and after recovery, she was brought to our hospital for further management.

A pelvic X-ray showed a large amorphous soft tissue calcification at the left hip joint (Figure 1A). As shown in Figure 2, computed tomography (CT) revealed large ossified lesions at the left hip joint with compression of the adjacent muscular structures leading to the diagnosis of grade 4 HO. She underwent excision of the HO followed by RT because prophylactic use of NSAIDs was contraindicated in this patient owing to her underlying medical conditions.

The patient received a total dose of 10 Gray (Gy) delivered in 2 fractions over 2 consecutive days, within 48 hours of excision of the HO. We administered RT using conventional opposed anterior-posterior configurations to treat the left hip joint in this patient (Figure 1B). No acute adverse effects were reported after RT and following this treatment, she reported clinical improvement in her range of motion at the left hip, which improved up to 100° of motion. Figure 1C shows the post-irradiation X-rays demonstrating radiographic improvement in HO at the left hip. No recurrence of HO was identified at her 2-year follow-up after RT, and she was observed to be in a stable condition with a stationary range of motion of left hip flexion.

Historically, HO was also termed ectopic ossification, para-osteoarthropathy, or myositis ossificans (13). Clinically, investigators have classified HO into three categories based on the risk factors associated with this condition: traumatic, neurogenic, and hereditary types (14). The traumatic type, or traumatic myositis ossificans, occurs after minor injuries, surgeries, or burns. This type usually develops in bones and joints in the vicinity of or surrounding the areas that are injured (14,15). The neurogenic type occurs as a result of neurological disorders, particularly in patients with severe spinal cord injuries (16). The hereditary type, or myositis ossificans progressiva, is the rarest variety attributable to a genetic condition, with an incidence of <1:1 million. The hereditary type of HO is associated with hereditary disorders such as fibrodysplasia ossificans progressiva, or Albright’s hereditary osteodystrophy; however, most patients succumb to restrictive lung disease or infection during their early life (13,17).

Although the etiology of HO is not fully understood, previous studies suggest that primitive mesenchymal cells get transformed into osteoblastic tissue leading to the process of lamellar bone formation in soft tissues (18). Surgical removal of the HO is recommended in those presenting with clinically apparent symptoms, and excision of the HO is aimed at maximizing the function of the affected joints (19). Prophylactic management against HO is needed to reduce further recurrence, although there is a lack of consensus regarding the optimal pharmacological management or prophylactic modality that is effective against HO (4,19).

Based on the action of NSAIDs, which inhibit uncontrolled activated cytokines that recruit osteoprogenitor cells, NSAIDs are considered effective chemoprophylactic agents against HO (10,11). Previous studies show that NSAIDs such as indomethacin or ibuprofen decrease the incidence of HO (20). However, limited data are available to show a significant benefit associated with the use of selective cyclo-oxygenase-2 inhibitors for the prevention of HO (21,22).

In addition to NSAIDs, RT may serve as useful alternative therapy for the prophylaxis of HO because RT inhibits proliferation of osteoprogenitor cells (12). Pakos et al. (23) performed a meta-analysis comprising seven randomized studies that compared between RT and NSAIDs as prophylactic modalities against HO and demonstrated that RT tended to be more effective than NSAIDs in preventing grade 3 or 4 HO (Brooker classification). Furthermore, Pakos et al. proposed that a dose of 6 Gy was as effective as NSAIDs in the prophylaxis of HO and that increasing the RT dose to >6 Gy was more effective than NSAIDs in the management of HO (23). These results suggest that RT is an effective alternative prophylactic modality for HO in patients with comorbidities in whom the use of NSAIDs is contraindicated.

Previous studies have described that the dose fractionation for RT for HO prophylaxis is variable (12,23-27). In the 1980s, a conventionally fractionated dose of 20 Gy was delivered based on extrapolation of bony growth inhibition according to application of RT in pediatric patients (12). Considering the potential adverse effects of RT, an increasing trend toward a reduced dose of RT for the prophylaxis of HO is being observed. Calculation of biologically effective dose (BED) values of RT for HO was based on the generic late effects α/β ratio of 3 (28). Sylvester et al. observed that the effects of HO prophylaxis and the adverse effects of RT were not significantly different between patients who received 10 Gy delivered in 5 fractions (BED =16.67 Gy) and those who received 20 Gy delivered in 10 fractions (BED =33.3 Gy) (24). Moreover, a single-fraction regimen comprising the administration of 7–8 Gy (BED =23.33–29.33 Gy) has been reported for the prophylaxis of HO (25,26). However, a low single-fraction dose of 5.5 Gy (BED =15.58 Gy) is not recommended for the prophylaxis of HO because of the higher radiographic failure rate (63%) than that observed with the administration of a single-fraction dose of 7 Gy (BED =23.33 Gy) (10%) (27). Table 2 summarizes the relevant series of radiation dose to HO prophylaxis after hip surgery (24-27).

Previous studies have also described the use of preoperative RT for HO prophylaxis (28-31). Milakovic et al. (28) reviewed 12 randomized trials that described the use of RT for the prophylaxis of HO and demonstrated no significant difference between the administration of post or preoperative RT in preventing the progression of HO. Additionally, the BED (α/β =3) of ≤ 25 Gy in the efficacies of HO prophylaxis was not significant when compared with a BED >25 Gy (P=0.28) (28). RT inhibits the transformation of primitive mesenchymal cells into mature osteoblastic tissue. Thus, RT ought to be administered as early as possible during the clinical course of the patient after undergoing the trauma or operation (32,33). Mourad et al. retrospectively analyzed 585 patients with displaced acetabular fractures who underwent an operation followed by RT using a single-fraction 7 Gy dose (BED =23.33 Gy) for the prevention of HO and observed that 106 patients (18%) developed HO within the irradiated field (34). The authors showed that the risk of the failure rate increased from 10% for RT delivered within 3 days to 92% for RT delivered >21 days after the initial injury (34). Roos et al. also found that the incidences of HO for BED 9–18 Gy group, BED 20–24 Gy group, and BED 29–38 Gy were 23.4%, 14.8% and 15.8%, respectively (35). In this report, our patient received immediate RT within 48 hours after excision of HO with a total dose of 10 Gy in 2 fractions (BED =26.67 Gy). The patient demonstrated clinical improvement in her range of motion at the left hip without any recurrence of HO at 2-year follow-up. Taken together, these findings indicate that the postoperative timing of RT (BED at least ≥20 Gy) delivery may play an important role in determining the efficacy of RT for the prophylaxis of HO.

In summary, our case report indicates that the administration of 10 Gy delivered in 2 fractions within 2 days postoperatively is an effective alternative prophylactic against HO. Although HO is a rare disease, our results and those of previous studies demonstrate that the administration of RT using 10 Gy delivered in 2 fractions or 7 Gy delivered as a single fraction within 3 days postoperatively is a safe and effective treatment option for the prophylaxis of HO, particularly in patients in whom the use of medications is contraindicated for prophylaxis.

Funding: This study was supported by the following research grants: 107-S3797 and 107-S3883 from National Taiwan University Hospital.