Surgery following neoadjuvant chemotherapy (NAC) is increasingly utilized for breast cancer treatment for various reasons. First, NAC results in loco-regional downstage and promotes breast conserving surgery (BCS) for better cosmetic outcomes (1-3). Second, the chemotherapeutic response can be tested before tumor excision via this approach, which helps avoid any ineffective adjuvant or NAC regimens and their resultant toxicities. In other words, earlier systemic treatment with effective regimens helps reduce risk of recurrence. Third, NAC allows selection of the optimal treatment option for individualized patient subgroups based on their therapeutic response and prognostic risks. However, as compared to the effectiveness of performing adjuvant radiotherapy after surgery, this approach involves uncertainties regarding the solutions of adjuvant radiotherapy (design of RT field and indication in low risk patients) in patients receiving NAC [e.g., the indication of treatment coverage of the axilla region regarding the dissected lymph nodes and post-mastectomy radiotherapy (PMRT) for low-risk patients with complete response]. In the past, most recurrent risks indicated by high-level evidence were those patients receiving adjuvant chemotherapy and radiotherapy following primary surgery. However, till date, when originally applied in patients with locally advanced disease, NAC has subsequently presented its extended indications even in the early stage disease.

Good response after NAC [e.g., pathological complete response (pCR)] is a strong predictor of its favorable outcome (1,4-6). The predictors reported in previous studies on primary surgery may not be accurate for assessing recurrent risks which are required to make decisions regarding loco-regional radiotherapy.

The impact of axillary lymph node status and correlated risk factors on the loco-regional events is also not well documented. Even the National Comprehensive Cancer Network (NCCN) guidelines of 2018.V1 state that “treat any part of axillary bed at risk” without interpretation of the types of risks in detail. The objective of this study was to identify the risk factors of loco-regional recurrence (LRR), relapse (any local, regional, or distant recurrence) and the overall survival (OS) with respect to tumor response after NAC in patients treated at our institution.

We retrospectively reviewed the patients treated at our institute between 2007 and 2015; 190 non-metastatic patients had received neoadjuvant systemic treatment, surgery, and adjuvant radiotherapy. The exclusion criteria were previous breast cancer disease (N=1), synchronous bilateral breast cancer disease (N=1), non-pure infiltrating ductal carcinoma (N=6), neoadjuvant treatment by hormone therapy alone (N=2), no adjuvant radiotherapy in this institute (N=2), no follow-up (N=3), human epidermal growth factor receptor 2 (HER-2) positive patients without trastuzumab (Herceptin®) prescription (N=6) and no residual lymph node disease (N=79). Patients were considered positive for HER-2 when there was a strong over-expression of HER2 immunohistochemical study (3+) or gene amplification by fluorescence in situ hybridization (FISH) in samples obtained by biopsy or definitive surgery.

The initial assessment of axillary disease was performed by ultrasound or aspiration cytology of the lymph nodes. BCS or total mastectomy with axillary lymph node dissection (ALND) and/or sentinel lymph node biopsy (SLNB) was performed by surgeons according to the institute’s guidelines for treating breast cancer.

According to the clinical practice guidelines of this institute, neoadjuvant anthracycline-based chemotherapy with or without taxane was administered for 2–6 cycles (most commonly 4 cycles). The decision whether adjuvant chemotherapy should be administrated depended on previous incomplete neoadjuvant cycles and response after NAC, and the total neoadjuvant and adjuvant chemotherapy course comprised 8 cycles. Trastuzumab (Herceptin®) every 3 weeks for a total duration of a year in neoadjuvant and adjuvant periods was prescribed for patients with strong over-expression or gene amplification of HER2 status. All patients received surgery after an NAC course of 2–6 weeks. Hormone therapies of tamoxifen, aromatase inhibitor, or GnRH inhibitor were prescribed for patients with positive ER or PR status for at least 5 years after adjuvant radiotherapy.

We compared the initial tumor size by ultrasound (preferred) or MRI (in case of no ultrasound), which were assessed by a certified surgical oncologist or radiologist, and the post-treatment tumor size was assessed by final pathological report. The response subgroups were defined as complete response (CR), partial response (PR), stable disease (SD) and progressive disease (PD) with reference to the response evaluation criteria in solid tumor (RECIST 1.1) as a reference (7). CR was defined as no residual invasive disease, such as ypT0/Tis and ypN0 (6).

The study was approved by the Breast Cancer Multidiscipline Group of Changhua Christian Hospital (CCH), and the ethical approval for the same was obtained from the committee on human experimentation of the same institution (CCH IRB No. 180313).

After NAC, the comparison of initial and post-treatment size demonstrated PR, SD, and PD in 52 (58%), 28 (31%) and 10 (11%) patients, respectively. The tumor types categorized by ER/PR/HER2 status, referred to as luminal A/B, Her2 positive and triple-negative breast cancer (TNBC), were observed in 50 (56%), 29 (32%), and 11 (12%) patients, respectively. There were 39 (43%) patients receiving the adjuvant chemotherapy and/or target therapy. Patient characteristics are summarized in Table 1.

All patients in this cohort who died had distant metastases. The risk factors affecting OS with statistical significance in the univariate analysis were the clinical N3 category (HR =10.73, P=0.042) and tumor type of TNBC (HR =4.09, P=0.006). However, only the tumor type TNBC (HR =3.04, P=0.048) showed statistical significance in the multivariate analysis (Table 4). 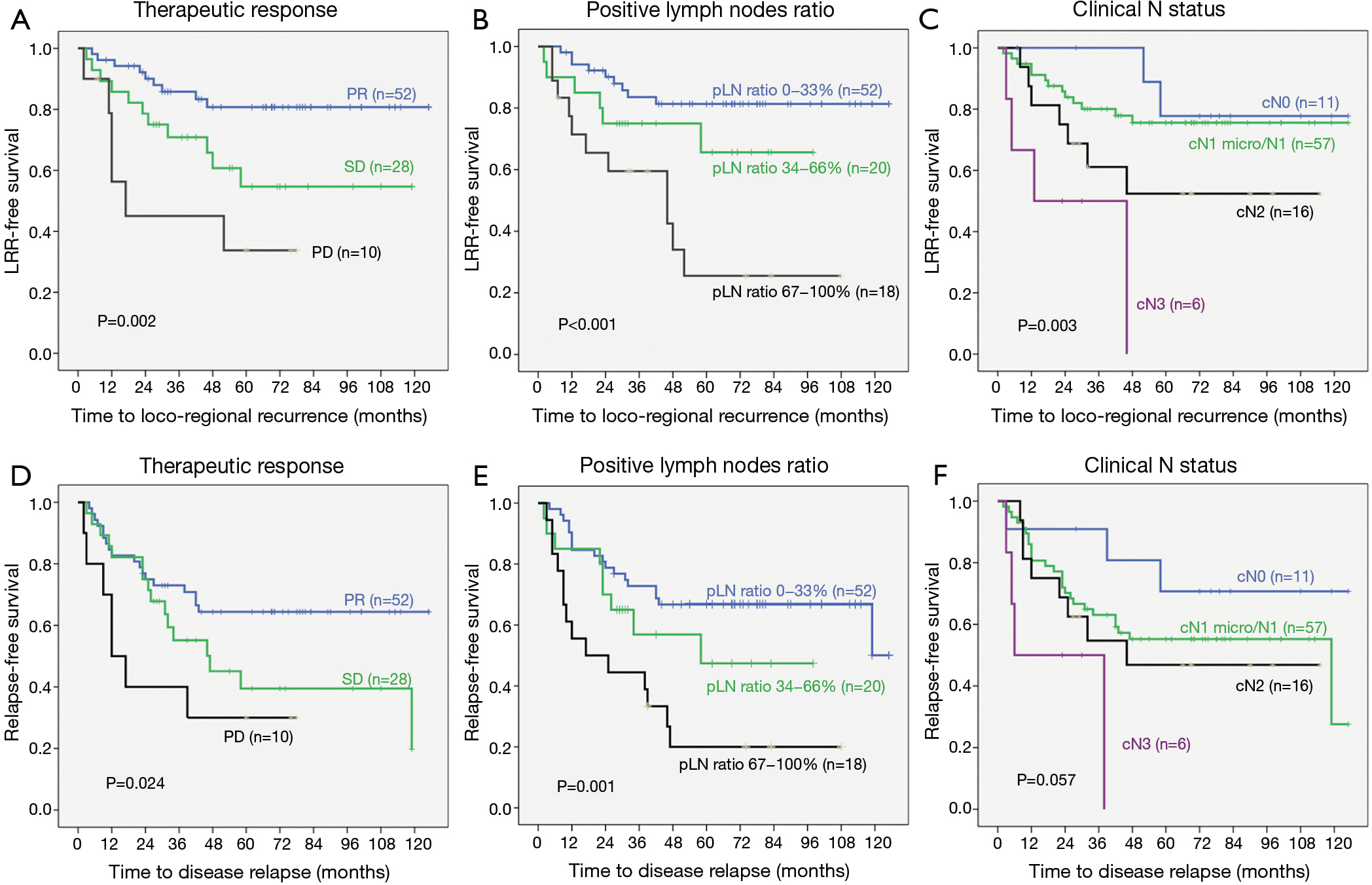 Significant predictors of LRR for patients treated primarily with surgery are well documented in the literature. Among these predictors, the pathologic status of axillary lymph nodes, number of positive lymph nodes, and even adequacy of axillary dissection are shown to strongly predict LRR. However, the issues with these prognostic factors and the impact of regional nodal irradiation have rarely been addressed in patients primarily treated with NAC.

In this study, we aimed to examine the risk factors of LRR and relapse for patients receiving curative surgery following NAC to decide whether the level I axillary lymphatic region should be included in the target radiation field. Previous studies in non-NAC scenarios showed that dissection of at least 10 lymph nodes is adequate ALND (8-16), which is advantageous for disease control and OS (8-13,16).

There was no indication of radiotherapy for the level I axillary region in patients with adequate ALND because of significant treatment sequelae of a combination of ALND and axillary RT (17,18). Considering the serious side-effects of ALND, axillary RT gradually replaced ALND in clinical node-negative but pathologically SLNB positive patients (19).

In fact, there may be other reasons leading to inadequate axillary dissection after NAC. For example, it has been reported that the lymphoid tissue in lymph nodes changed after NAC, including lymphoid depletion, fibrosis and hyalinization (1,22-24). In addition, the shrinkage of axillary lymph nodes after NAC allows surgeons to identify the lymph nodes in difficult scenarios and lessen the dissected volume during surgery (24-26). Moreover, the pathological examination skills (such as blunt dissection or fat dissolving technique and serial sectioning or radiological evaluation) affect the accuracy and resolution of tumor cell assessment in lymph nodes. Furthermore, different therapeutic responses after NAC act as important predictive factors. For instance, the number of dissected lymph nodes of <10 nodes may indicate a good response. Therefore, dissection <10 nodes cannot be considered as inadequate ALND in a typical NAC scenario. In this study, although the difference in the number of dissected lymph nodes of more than or less than 10 nodes was statistically significant in univariate analysis for LRR, it was not a risk factor in multivariate analysis and overlapped with the positive ratio of dissected nodes. Hence, in patients treated with NAC, the dissected number of lymph nodes >10 cannot predict prognosis similar to that in patients receiving primary surgery followed by adjuvant chemoradiation (non-NAC). Further studies related to this characteristic are required for clarity. 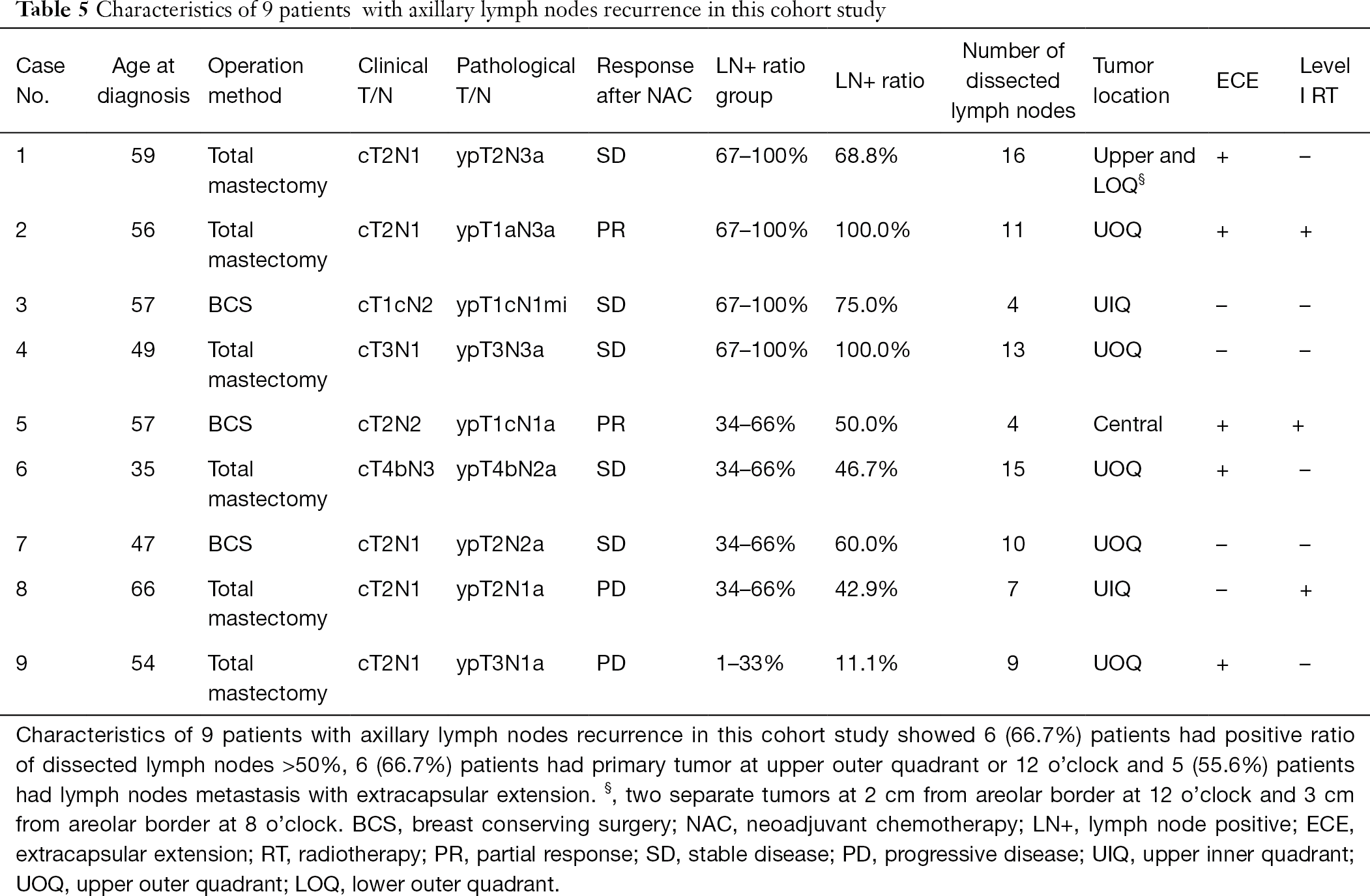 This study included patients with pathologically positive lymph nodes. Exclusion of patients with pCR (ypTis/T0 N0) decreased the strong impact of therapeutic response on other risk factors independent of achieving statistical significance. Univariate and multivariate analyses revealed that therapeutic response, clinical N status, and positive lymph nodes ratio were risk factors of LRR and DM. Several studies have showed therapeutic response (41-43), clinical N status (45,46) and positive ratio of dissected LN (31-33) as predictors of disease control. However, the risk factors found by these studies, such as grade 3 (47), presence of lymphovascular invasion (45-47), ypN2–3 (47), primary tumor size (45-47), pathologic tumor size after NAC (46), age (1), molecular type (TNBC) (6,40), and positive surgical margin (48) failed to achieve any statistical significance or trends as shown in other studies. It may be attributed to the relatively fewer number of cases and events, short follow-up period, and selection bias which are the inherent features of a retrospective study.

The pathological lymph nodes status, such as ypN1 and ypN2 in NAC scenarios was not obviously significant in predicting disease control as in non-NAC scenarios, both in the present study and others NAC studies. This prognostic factor may be interfered by NAC. Whether positive lymph node ratio is a better prognostic factor than only the number of positive lymph nodes requires further detailed investigation.

This study has some limitations. First, it is a retrospective study and therefore includes some bias. Longer follow-up period and a larger sample size in the future studies will help provide better result for breast cancer study. In response, the Alliance 011202 trial phase-III randomized trial, including clinical T1–3N1M0 patients with positive axillary lymph nodes after NAC, has been initiated to address the question about axillary recurrent risks and their management.

The consensus on the exact role of radiotherapy in the management of patients with breast cancer undergoing NAC with regard to the therapeutic response remains unclear. In this study, we recorded poor therapeutic response, advanced clinically positive lymph nodes, and higher proportional positivity of dissected lymph nodes showing poor outcome regarding to the loco-regional control and RFS among patients with positive axillary lymph nodes after NAC. The decision whether radiotherapy can be delivered to the regional lymphatic areas, including axilla, should depend on the chemotherapeutic response and surgical extent, particularly in patients with incomplete response of the lymph nodes with high positive lymph nodes ratio. Future prospective studies will provide us with more accurate risk predictors of LRR for better planning of the treatment design.

Ethical Statement: The study was approved by the Breast Cancer Multidiscipline Group of Changhua Christian Hospital (CCH) and the ethic approval was obtained from the committee on human experimentation of the same institution (CCH IRB No. 180313).