Sebaceous carcinoma is a rare malignancy, accounting for 1–5.5% of eyelid malignancy (1). The disease-related mortality rate is 6% to 30%. Surgery, in the past, is the standard and most reliable curative treatment (2). In recent days, conservative treatment, which is composed of local tumor excision and adjuvant radiotherapy, has become more accepted. Sometimes, there are conditions that make patients not candidates for surgery, such as old age. In such circumstances, definitive radiotherapy (RT) might be an alternation. For superficial tumor on the eyelid, electron beam RT might be the best choice. However, organ at risk around the eyeball, such as cornea, lens, retina, are vulnerable to ionizing radiation. In this report, we tried to use eye shield to reduce radiation dose to related organ at risk.

An 84-year-old female complained about right eye pain and came to our ophthalmology department with her family. Physical examination found blepharitis and marginal erosion with papilloid tumor on right eye. The tumor was 3.5 cm × 0.6 cm in size, and excision biopsy was done. Pathology revealed sebaceous carcinoma. Head and brain magnetic resonance imaging (MRI) showed local infiltration without evidence of regional lymph node metastasis. Chest X-ray and abdominal ultrasonography excluded distant metastasis disease. After discussed with patient and her family, she was referred to radiation oncology department for definitive RT. She received definitive RT with 54 Gy, 1.8 Gy per fraction, 5 days per week, using tungsten eye shield. The back scatter from eye shield has taken into consideration (Figure 1). 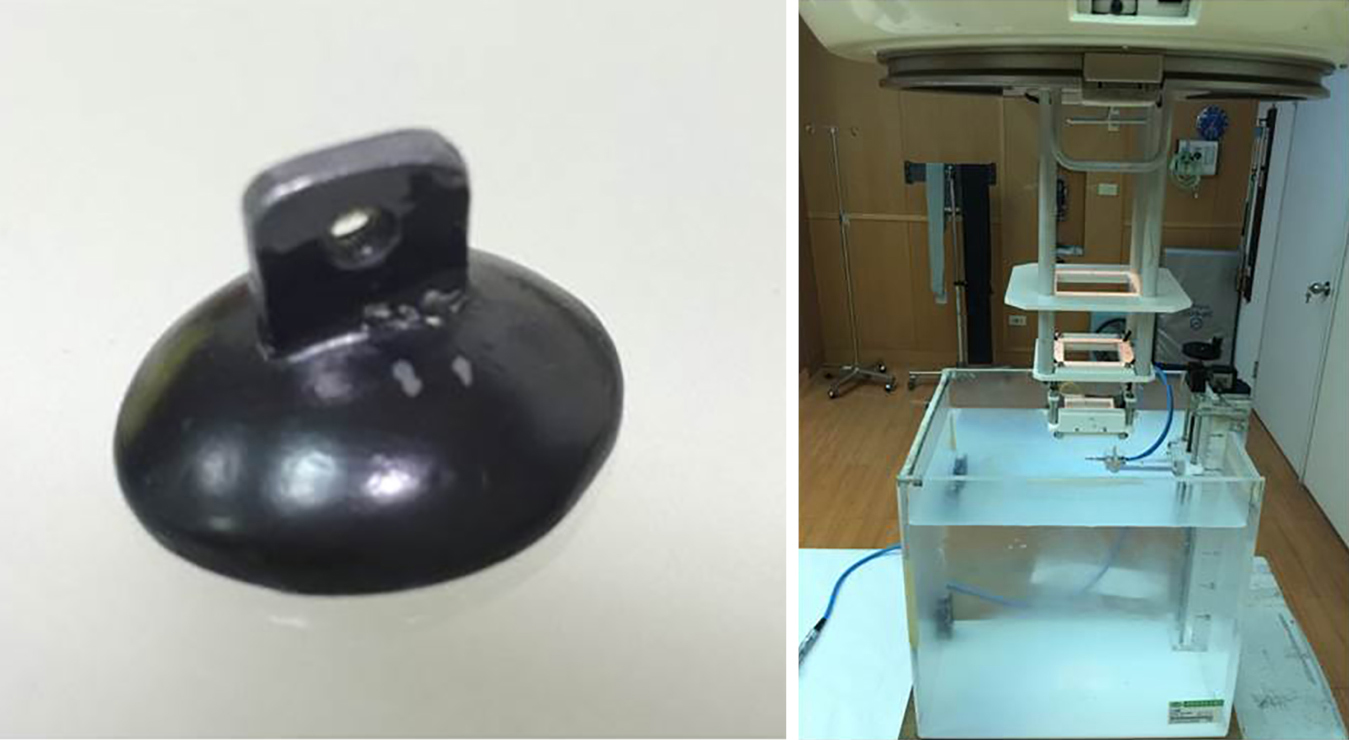 We used water phantom, electron block and ion chamber to monitor the dose in those distances we measured above (Figure 2), and compared the results with the dose constraint according to Radiation Therapy Oncology Group (RTOG) protocol (Table 1). A PTW 31014 Pinpoint chamber with an active volume of 0.015 cm3 was used to measure the absolute dose of small beams. The ion chamber was immersed to PTW MP-3 water phantom for measurement at different depth with or without the eye shield. All irradiations were performed by using an Elekta Precise Linear Accelerator with 6 MeV electrons, under source to skin distance (SSD) 100 cm. A 6 cm × 6 cm cone was set between source and phantom. We initially delivered 2 Gy with eye shield set (252 MU), and measured the dose to eyelid point (0.42 cm). Backscattered would make the dose to eyelid more than 2 Gy. Then we verified the energy to make the eyelid dose matching 2 Gy (205 MU). Under this setting, we measured the dose to cornea, lens and retina, separately with or without eye shield. We set all the measured points to be as treating with eye shield so that the dose would be comparable. We measured the dose to cornea, lens and retina under eye shield by using 205 MU, and 252 MU without eye shield, to make sure that the dose to eyelid was 2 Gy. 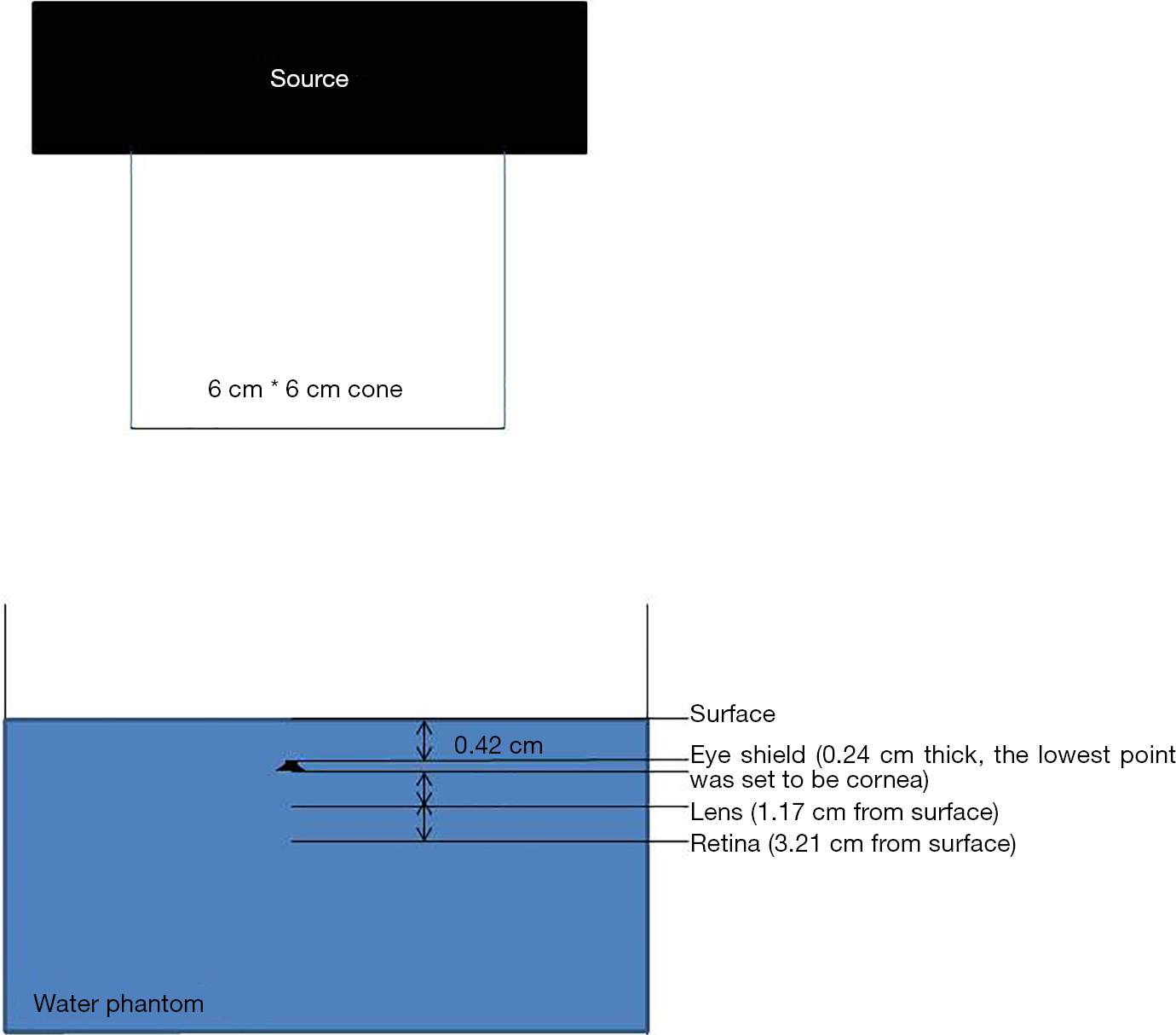 The distance from the surface of eyelid to cornea is about 0.42 cm, and 0.93 cm to lens, 2.97 cm to retina, respectively. After eye shield was placed, the distance became 0.66, 1.17 and 3.21 cm, respectively. Table 2 showed the measured dose according to these points, with or without eye shield.

As compared to recommendation from RTOG studies, only the dose of lens might exceed. The patient tolerated the RT course well, no severe keratitis or local infection happened. RT didn’t interrupt. We started to treat her on 2015/11/19 and finished the course in 2015/12/30. Two years after completion of RT treatment, the patient maintained her visual acuity.

Eye shield has been used for RT to eyelid for a period of time. Rustgi (3) used cylindrical commercially Cerrobend eye shield, 9 MeV electrons, polystyrene and 4 cm × 4 cm cone for monitoring relative percentage dose for lens, which was supposed to be at a depth of 0.25 to 0.75 cm, and found that the dose increased with depth at the center of the shield, which made the final dose became higher than predicted. She concluded that the phantom and cone generated scattered electrons would increase the dose, and a shield with a diameter of 1.3 cm, thickness of 1 cm was adequate for the 9 MeV electron beam.

Most of the eye shields were made of metals such as lead, gold, or sometimes, tungsten. The shape of eye shield became like contact lens, instead of cylinder. However, Shiu et al. (4) reported that commercially available eye shields were inadequate to protect the ocular structures from penetrating electrons for beam energy greater than 6 MeV. With a 1.7 mm thick lead eye shield, the transmission energy of a 6 MeV electron beam was found to be 50% on cornea and 27% of lens, respectively. With tungsten eye shield, the dose measured to cornea and lens all decreased by 5%. Back scattered from eye shield was also concerned. The electron backscattered from tungsten eye shield without acrylic coating increased the lid dose from 85% to 123% at 6 MeV and 87% to 119% at 9 MeV. With acrylic, the dose was increased from 85% to 98.5% and 86% to 106% at 6 MeV and 9 MeV, respectively. They suggested that using tungsten eye shield and a minimum thickness of 2 mm dental acrylic on beam entrance surface of the eye shield could provide adequate protection to eye structure and also decrease backscattered electron.

Weaver et al. (5) designed a tungsten and aluminum eye shield, and compared it with a lead-made eye shield. At 6 MeV, tungsten eye shield decreased the dose to dmax from 0.046 to 0.042 Gy when 1 Gy was delivered to dmax. Backscattered was also decreased from 1.17 to 1.13 Gy. The similar result was also seen in 9 MeV. Thus, they concluded that tungsten is superior to lead as a material for eye shield.

In our experiment, we used a tungsten eye shield with thickness 2.4 mm. It’s thicker than the eye shield used in Shiu et al. (1.7 mm), but not in Weaver et al. (3 mm). The eye shield was not coated with acrylic. We used 6 cm × 6 cm cone; thus, cone factor should also take into consideration. As our result, the dose to eyelid increased after using eye shield by 22%, which was higher than that in Almon’s study (16%). The backscattered electron increased the dose to eyelid (Table 3).

The dose to lens (1.17 cm), whether with or without eye shield, was higher than the dose to cornea. There are two reasons which may explain. One is that the cone and the water phantom may generate scattered electrons (3). The other is the dose distribution of electron presents a peak not at the surface of phantom, but beneath surface (dmax). In our settings, dmax was at 1.3 cm, which was much closer to lens than to cornea (0.66 cm). As the distance to shield increased, the proportion of dose increased. It might be due to the increasing penumbra (2).

Finally, the dose to cornea, lens and retina were calculated separately and compared with the dose constraint according to RTOG protocol. The dose to lens would exceed the limitation (10.77 Gy). Even if we verified fraction size to 1.8 Gy per fraction, it was still over (9.96 Gy). It indicated that the adverse effect to lens may be inevitable. Fortunately, recent advances in cataract surgery, such as phacoemulsification with intraocular lens implantation, could resolve this adverse event safely and more minimally invasive. There has been no consensus to the dose constraint for cornea so far, and the protocol from RTOG 0225/0615 was for the whole eyeball. Whether it can be referred to as the constraint for cornea is unclear. With the eye shield used, the mean dose for the whole eye was within the limitation. No cornea irritation, inflammation or infection occurred during treatment.

The main limitation for the study is the position of lens and retina may be different between patients and the dose measured in this study may be a personal data. In addition, whether the treatment is effectiveness for patient should also be considered. There are more cases should be collected and longer time should be followed up.

The eye shield could be used as treatment for sebaceous carcinoma on eyelid. The eye shield could mask extra radiation to cornea and retina. With careful management, severe toxicity or morbidity may not be inevitable. However, the dosimetry should be evaluated by case.