A 52-year-old male with a history of renal stone since 10 years ago had suffered from painless hematuria for a week. Physical examination of the patient showed unremarkable findings. Urine examination showed some red blood cells in urine, and biochemical analysis and complete blood count were all within normal limits. Chest X-ray showed no abnormalities. Kidney, ureter and bladder (KUB) X-ray revealed renal calculi on the right side. Computed tomography (CT) of the abdomen showed an enhancing mass with the size of 6.5 cm in diameter in the lower pole of right kidney. No evidence of liver metastasis or lower lung metastasis were observed (Figure 1). Clinical stage was classified as T3aN0M0 (stage III, AJCC 7th staging). 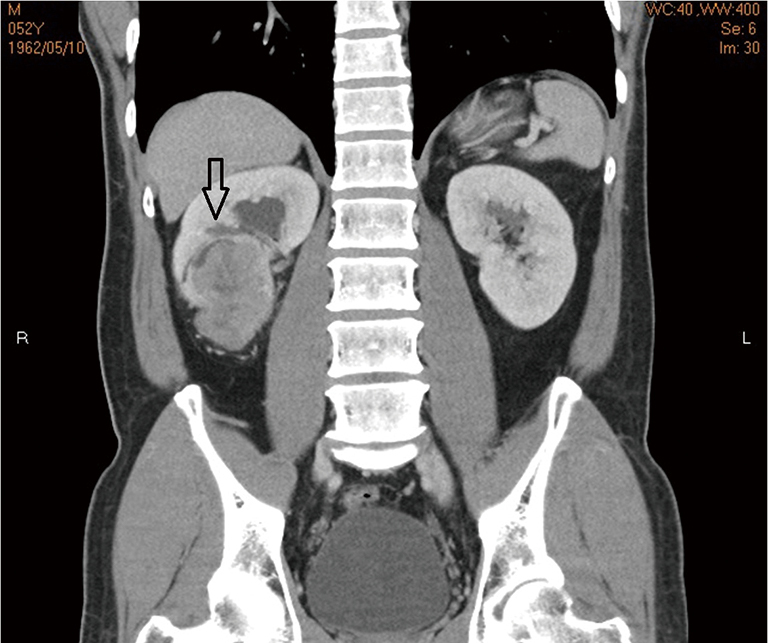 Figure 1 An enhancing mass with the size of 6.5 cm in diameter (arrow) in the lower pole of right kidney. No enlarged lymph node is found and no evidence of liver metastasis or lower lung metastasis were observed. Clinical stage was classified as T3aN0M0. 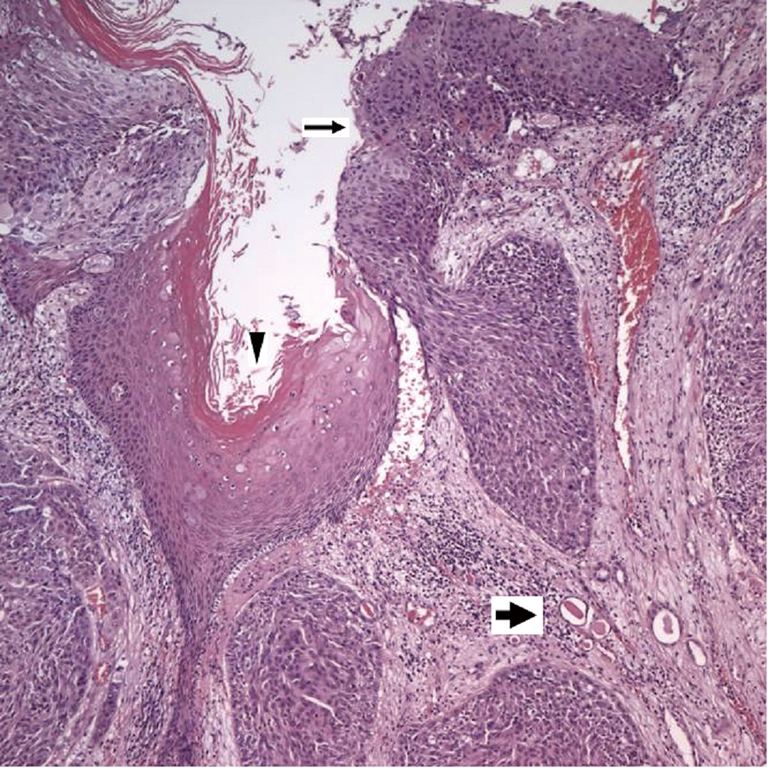 Post-operative radiotherapy (RT) to tumor bed (Figure 3) with 6,000 cGy/30 Fr was planned and performed for 6 weeks after surgery. During radiotherapy, the patient complained about intensified shoulder pain and severe fatigue; therefore, the treatment stopped at a dosage of 5,000 cGy instead of the planned dosage of 6,000 cGy. His bone scan and shoulder magnetic resonance imaging (MRI) revealed bone metastasis at right distal clavicle. On the follow-up CT of the abdomen 4 weeks after RT, local recurrence of metastases in the right renal fossa (Figure 4), multiple metastases in the both lobes of liver, metastases in the right lower lobe of lung and bony metastases in the L2 vertebrae and bilateral ribs were noted. The patient’s condition deteriorated rapidly. Due to respiratory failure, the patient passed away within 5 months after operation. 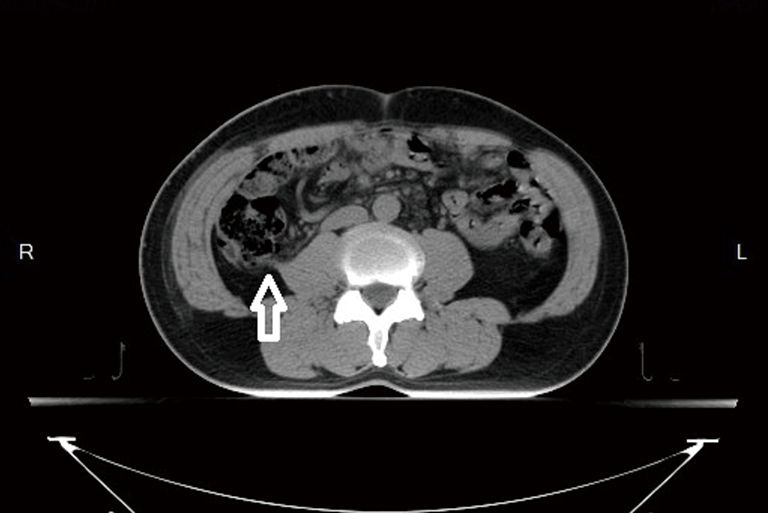 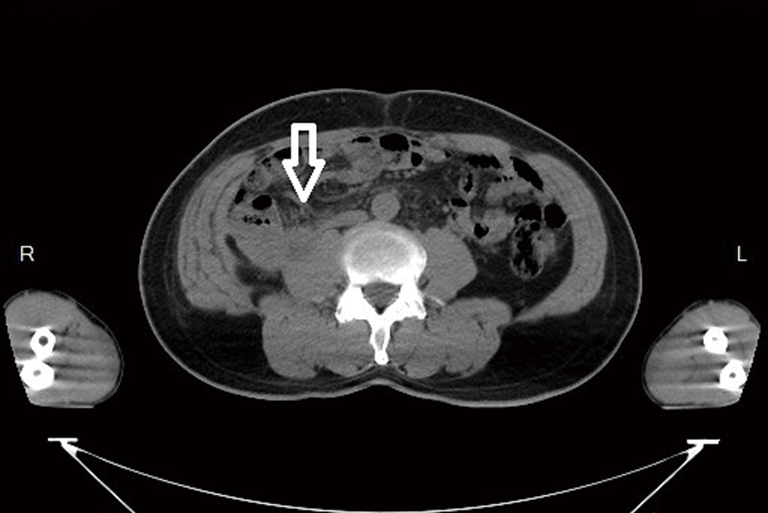 Patients who have past history of renal calculi and have an associated poor functioning kidney or hematuria require an examination such as CT to screen malignancy recommended by Raghavendran et al. (4). A study by Narumi et al. found that renal pelvic and ureteral SCC demonstrated predominantly extraluminal extension with invasion into surrounding organs or the renal parenchyma. Narumi’s study differed from the CT appearance of the renal pelvic and ureteral transitional cell carcinoma (TCC) in a way that TCC was demonstrated as an intraluminal mass in 50% of cases (5,6). Chronic inflammation of urothelium is regarded as a cause of squamous metaplasia with subsequent malignant progression to SCC (7). The most well-known causes of chronic inflammation are long-term renal calculus disease, previous history of renal calculus surgery, chronic analgesic abuse or RT (2,7).

Symptoms such as hematuria, flank pain, flank mass and features of tumor cachexia are usually attributed to the late presentation of renal pelvic SCC (8). Most of those patients were diagnosed at advanced stage with extensive local infiltration, making surgical resection difficult (2). The lack of early-stage diagnosis could probably be explained by absent of clinical warning signs (9). Hypercalcemia secondary to pseudohypoparathyroidism has also been reported as a presenting sign (10).

In practice, patients with SCC of the renal pelvis are more likely to present with patterns of regional and distant metastasis, while TCC have a higher likelihood to present patterns at a local or in situ stage. Moreover, a recent study shows that about one third of the patients had distal metastasis at initial diagnosis (11). Due to the high risk of distal metastasis, it is critical to rule out metastatic SCC at initial diagnosis by using a combination of clinical history, imaging, and histopathology (12).

A study by Busby et al. reported that half patients have had tumor bed recurrence or distant metastasis within 5 months after operation (11). The aggressive nature of this tumor is indicated by the extensive regional spread, lymphadenopathy and metastasis to the lungs and liver but rarely to the bones. According to Hameed’s study, there were only three cases of SCC of the renal pelvis with bone metastasis reported before 2014 (8).

The outcome for patients with SCC of the renal pelvis is very poor with a median survival of only 7 months after surgery and only 7.7% of the patients survived longer than 5 years (7). Poor response to surgery, RT and chemotherapy also resulted in a poor prognosis and short survival (2).

There are still no standard treatments for SCC of the renal pelvis. Some literature suggests the primary treatment of renal pelvic SCC is nephrectomy (1,2,7,13). Surgery with nephrectomy is suggested to establish a histological diagnosis and to relieve symptoms such as pain, fever and hematuria (1,7). Cisplatinum-based adjuvant chemotherapy and RT can also be considered to improve the control of local symptoms but these treatments have failed to show any survival benefit (13).

In conclusion, our reported case showed that the patient with renal pelvic SCC had no symptoms and signs at the beginning but his condition deteriorated rapidly. Regrettably, multiple bone and liver metastases were noted after 4 months from the initial surgery. Due to aggressive nature and rapidly progression of renal pelvic SCC, close follow-up after surgery is suggested. Although uncommon, renal pelvic SCC may present with distant bony metastasis. Surgery with nephrectomy remains as the primary treatment for this type of renal pelvis. Adjuvant chemotherapy or radiotherapy, though presents no concrete evidence of survival beneﬁts, may still play a role for the control of local symptoms. New treatment modalities of patients with renal pelvic SCC and efforts at improving the accuracy of diagnosis at presentation are warranted.

This research was supported by Kaohsiung Medical University Hospital. I (Dr. Chia-Jung Hsu) would like to thank my colleagues from Department of Radiation Oncology who provided insight and expertise that greatly assisted the research.