Hypopharyngeal squamous cell carcinoma (HPSCC) is a common head and neck cancer in Taiwan (1). The disease has a locally aggressive pattern and the worst prognosis among all head and neck subsites (2,3). Smoking and alcohol intake are the main risk factors for these patients. Common symptoms include dysphagia and odynophagia. Because of nonspecific early symptoms, 70–85% of patients with HPSCC are usually diagnosed at stage III or IV stage (4). The survival outcome is poor despite improved diagnostic technique and developments in surgical and non-surgical treatment in the recent decades. Radical surgery with or without adjuvant radiotherapy or concurrent chemoradiotherapy (CCRT) is traditionally the main initial treatment modality for advanced HPSCC. Due to high morbidity after the surgical treatment, non-surgical treatment was widely studied for voice preservation and swallowing function, thus better quality of life. Some studies reported that organ preservation treatment resulted in comparable outcomes to primary surgery (5-7). However, there is still no consensus for the optimal treatment of advanced HPSCC from previous results (5-8). Previous laryngeal preservation studies were mostly based on patients with laryngeal cancer or mixed subsites and stages of head and neck cancer. Therefore, the aim of our study was to report the treatment outcomes with comparative analysis between primary surgery and primary CCRT for patients with advanced HPSCC. 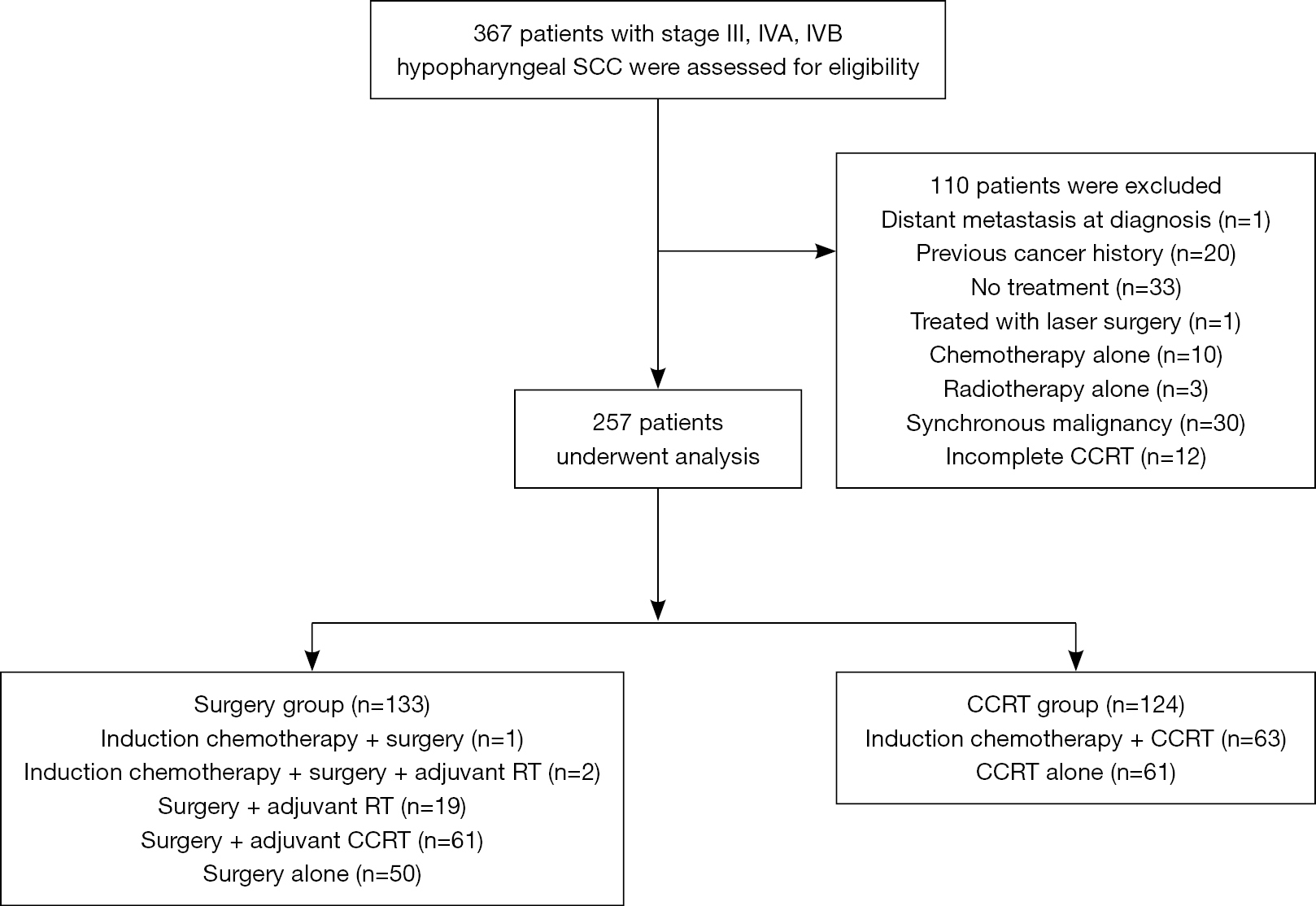 Among the 124 patients treated with definitive concurrent chemoradiotherapy (CCRT group), 63 patients received induction chemotherapy followed by CCRT and 61 patients underwent definitive CCRT alone (Figure 1). After the CCRT treatment, 8 patients underwent salvage neck dissection, 9 patients underwent salvage laryngopharyngectomy and 16 patients underwent both salvage laryngopharyngectomy and neck dissection for residual disease. The concurrent chemotherapy regimen was at the discretion of the medical oncologist and mostly included a cisplatin-based regimen (weekly 30–40 mg/m2/wk). Induction chemotherapy regimen consisted of FP (5-fluorouracil, cisplatin) or TPF (5-fluorouracil, taxotere, cisplatin). For patients treated with radiotherapy, the initial RT treatment field was to irradiate the entire tumor and regional lymphatics with adequate margins with 6MV X-ray beams via 2D, 3D or IMRT (which was the major technique after 2004). The prescribed dose was 1.8–2 Gy per fraction per day, given 5 days per week. The dose for initial RT fields ranged from 46 Gy to 50.4 Gy. The boost RT volume included primary tumor or tumor bed and positive lymph node regions. In the adjuvant setting, most patients received a total RT dose of 60.8–66 Gy. In the CCRT group, most patients received a total RT dose of 66–72 Gy unless intolerable. For those receiving induction chemotherapy, the treatment response was evaluated by RECIST criteria (9) and mostly defined by CT scans. After the primary treatment, patients were followed in the outpatient department and image studies were routinely arranged to detect recurrence. A CT scan or MRI of the head and neck was performed 2 to 3 months after RT and then annually for 5 years, or as clinically indicated after primary treatment. Bone scans and abdominal sonography were arranged when clinically indicated.

The primary endpoints of this study were overall survival rate (OS) and disease-free survival (DFS), and the secondary endpoints were loco-regional recurrence rate (LRR) and distant metastasis rate (DMR). The duration of survival was calculated from the time of pathological diagnosis to the date of event or to the most recent follow-up date. Survival rates were estimated by Kaplan-Meier method and survival curves were compared by log-rank test in univariate analysis. The Cox-regression model was used for multivariate analysis. A P-value of less than 0.05 was used to indicate statistical significance.

The study was approved by the ethnic committee of our hospital. The IRB number for this study is 104-4642B. The SPSS ver.22.0 statistical software was used for data processing (IBM Corp., Armonk, NY, USA).

A total of 257 patients met the inclusion criteria and the characteristics of all patients treated were summarized in Table 1. The mean age was 53.8 (range, 33–85 years). Most patients were male (97.3%), smokers (83.3%) and alcohol drinkers (78.6%). All patients were staged using the TNM classification system (7th AJCC edition) (10). Fifty-four patients (21%) had stage III tumors, 133 patients (51.8%) had stage IVA tumors and 70 patients (27.2%) had stage IVB tumors. There was no significant difference between two the groups in age, sex, performance status, proportion of smokers and alcohol drinkers. 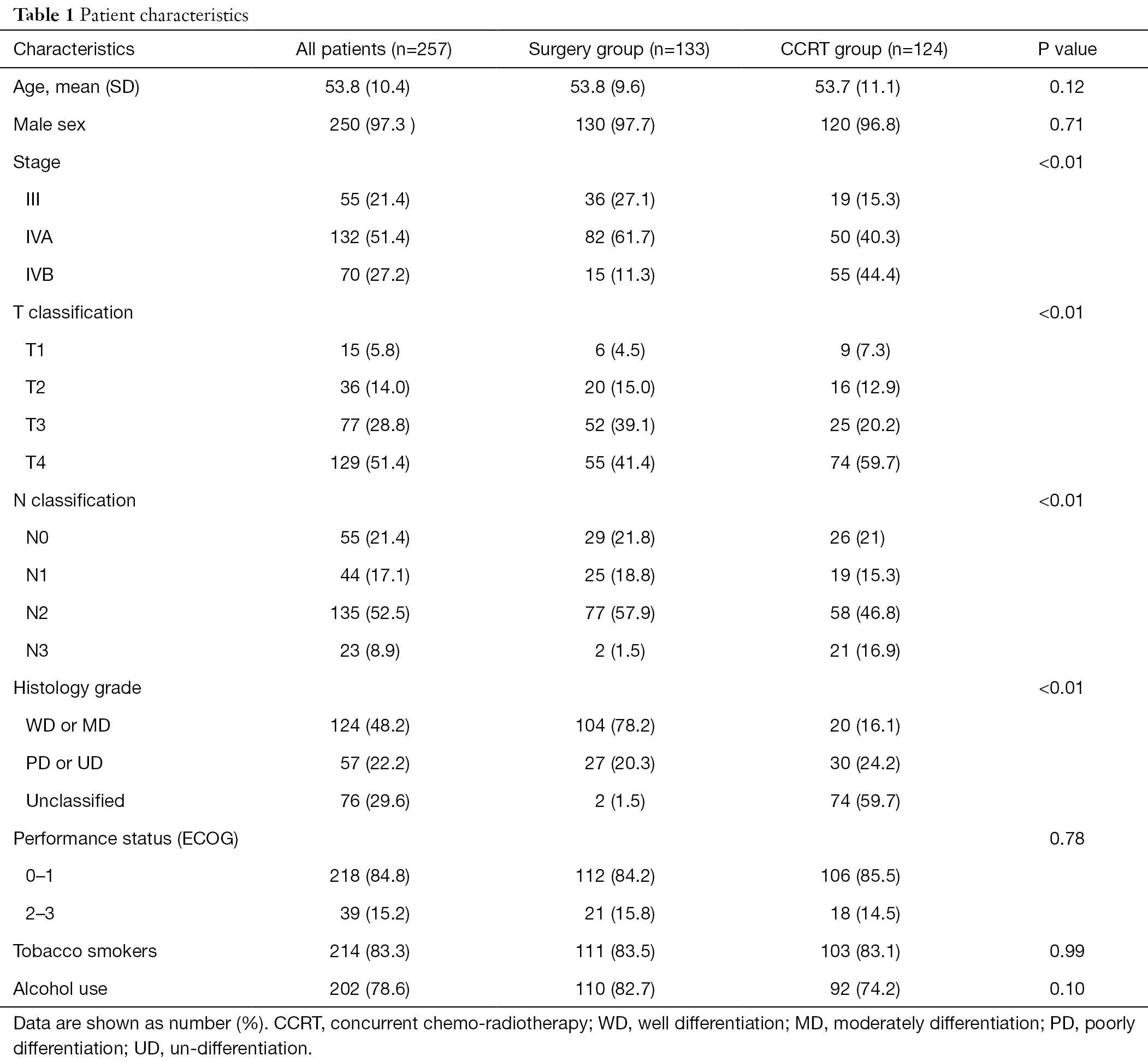 Figure 2 Overall (A) and disease-free survival (B) by clinical stage. 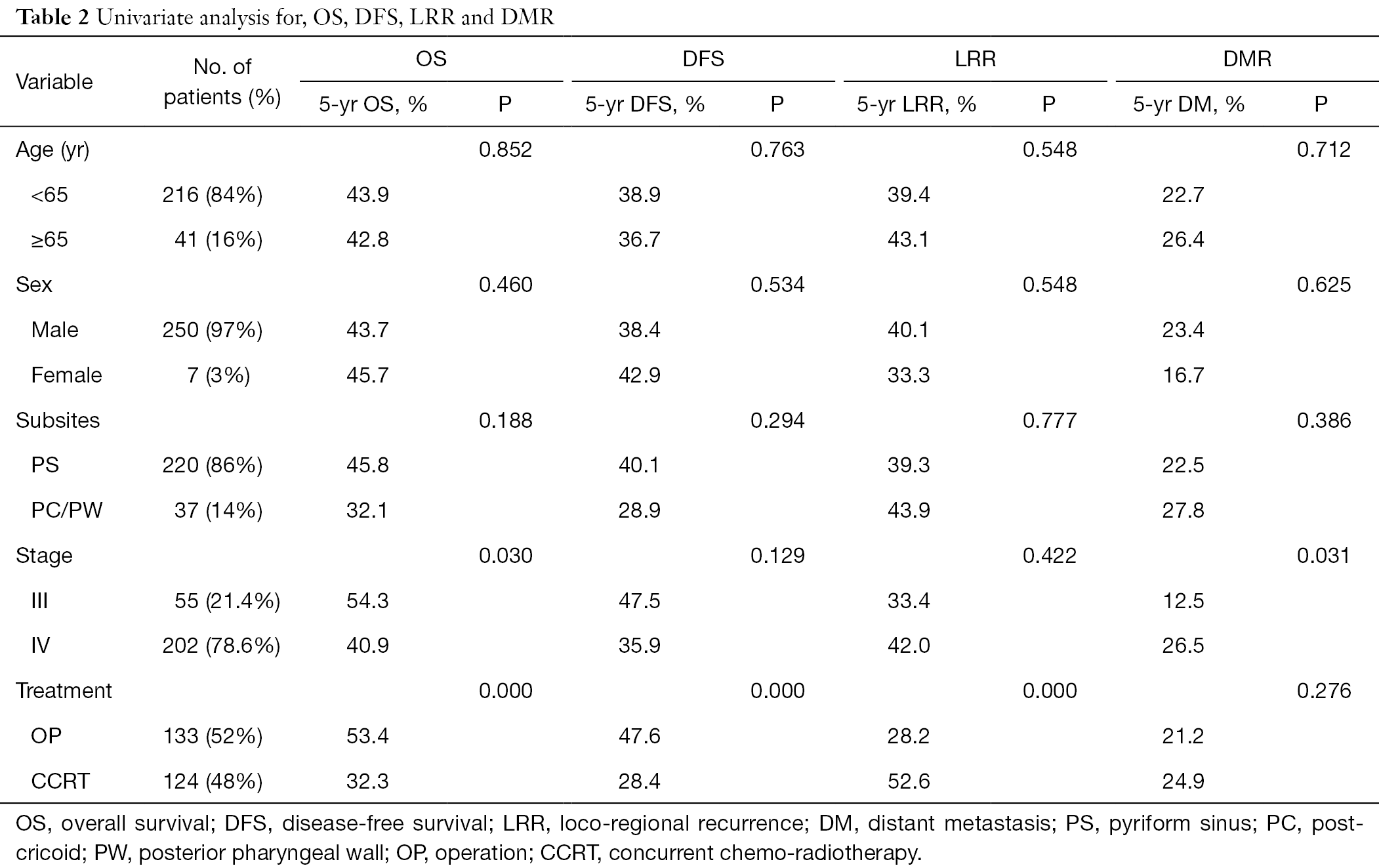 Figure 3 Overall (A) and disease-free survival (B) by treatment modalities.

Figure 4 Cumulative incidences of loco-regional recurrence (A) and distant metastasis (B) by treatment modalities.

Figure 5 Overall (A) and disease-free survival (B) in stage III disease.

Figure 6 Overall (A) and disease-free survival (B) in stage IVA–B disease.

Figure 7 Overall (A) and disease-free survival (B) by definitive CCRT and induction chemotherapy plus CCRT. 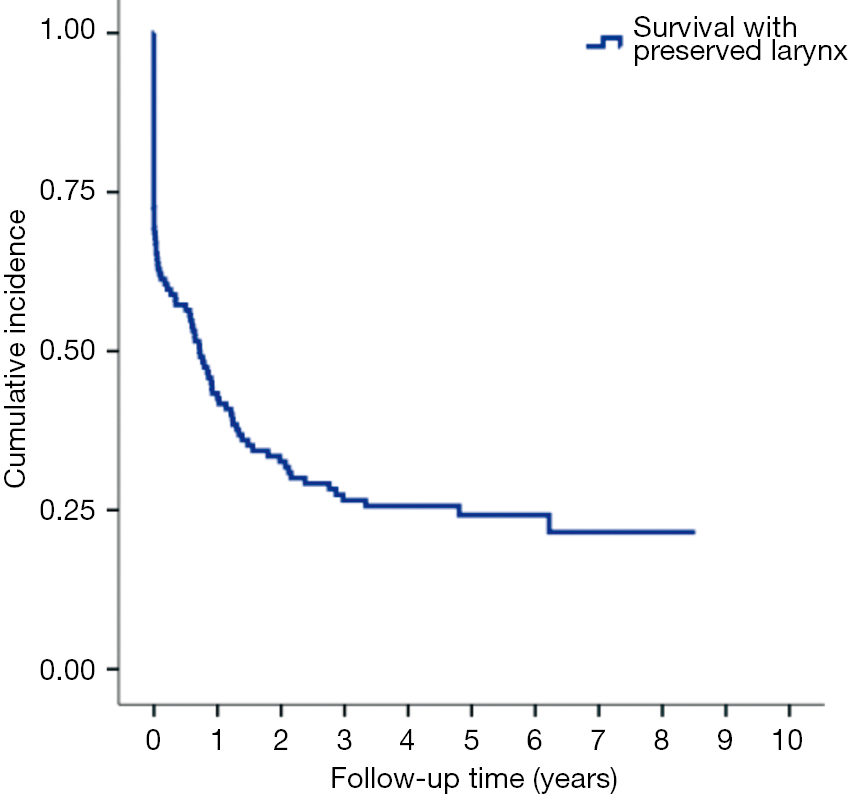 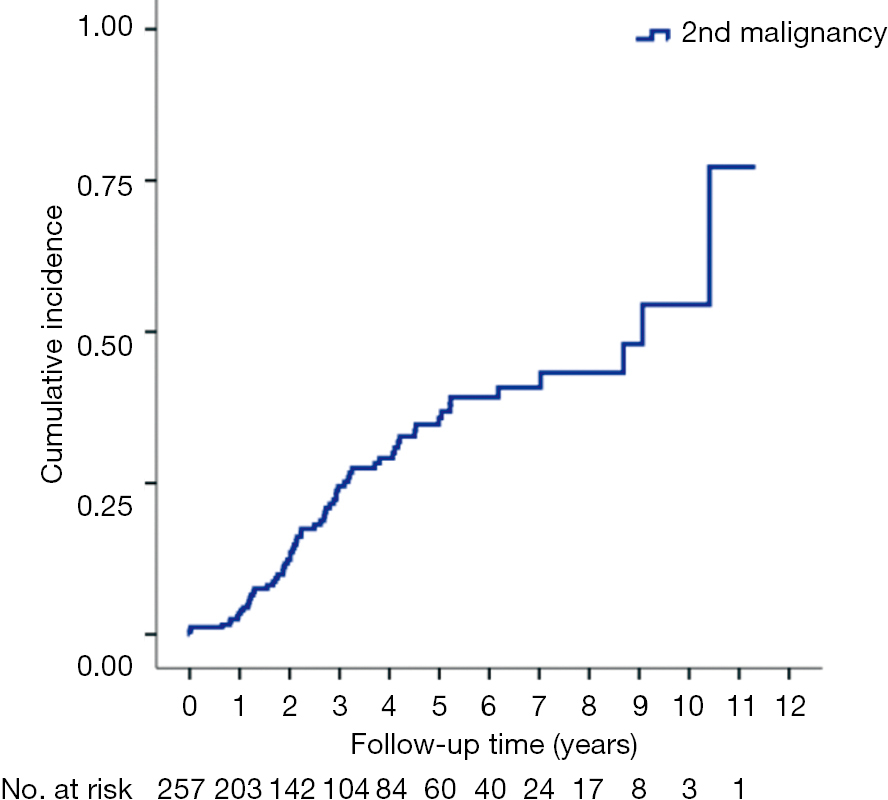 Hypopharyngeal squamous cell carcinoma has the worst prognosis among all head and neck cancers (11). Patients with hypopharyngeal squamous cell carcinoma are often diagnosed when at advanced stages (12). The regime for these patients involves achieving a balance of cancer treatment, decreased treatment-related morbidity, preservation of organ function and a satisfactory quality of life. In the past, combination of primary surgery alone or in combination with post-operative radiotherapy was the standard treatment. However, due to the poor prognosis and poor quality of life after surgery (13), several studies started to investigate induction chemotherapy in 1980s (14). Lefebvre et al. (15) reported a result from phase III study conducted by the European Organization for Research and Treatment of Cancer randomly treating 194 patients with stage II to IV HPSCC with either surgery and postoperative RT or induction chemotherapy, followed by radiotherapy for patients with complete response and surgery for non-responding patients. The 5-year survival was 35% and 30% respectively without any significant difference between these two groups. Another retrospective study published by Lajtman and Menestar also showed no significant difference in 5-year OS between non-surgical and surgical therapy (16). From these trials, the larynx-conserving approach appeared to be an alternative treatment and upfront surgery is no longer the only standard treatment for hypopharyngeal cancer. Furthermore, concomitant chemoradiotherapy was widely accepted as organ preservation treatment in recent decades (17,18). A randomized trial conducted by the Radiation Therapy Oncology Group and the Head and Neck Intergroup (RTOG 91-11) reported that radiotherapy plus concurrent cisplatin is superior to sequential therapy or radiotherapy alone for achieving locoregional control and laryngeal preservation in patients with locally advanced resectable laryngeal cancer (19). On the basis of these results, concurrent chemoradiotherapy has been regarded as the gold standard treatment for HPSCC in term of organ preservation.

However, Kuo et al. (20) analyzed 3,968 hypopharyngeal cancer patients from Surveillance, Epidemiology, and End Results database. Kuo found that surgery with radiation still has better survival rates than radiation alone with hazard ratio of 1.71. Another study, reviewing the laryngeal cancer patients from the US national cancer database (21) also showed decreased survival in past decades was related to a significant increase in the use of CCRT and decrease in aggressive surgery. Currently, the best treatment to achieve a balance between organ preservation and aggressive surgery is still unknown. Thus, in the present study, we compared the outcome between primary surgery with or without adjuvant RT/CCRT and definitive CCRT in patients with stage III–IV HPSCC. The five-year overall survival (44%) was comparable to the results of previous reports (3,8,22,23). The 5-year OS, DFS and LRR were significantly improved with primary surgery over primary CCRT in both univariate and multivariate analysis. A retrospective study presented by Axon et al. (24) echoed our findings. Tsou et al. (25) retrospectively analyzed 202 patients with HPSCC and found a significantly better survival rate in the surgery-first group than the CCRT-first group for stage III to IV disease. The decrease of tumor burden achieved by surgery may be associated with improvement of loco-regional recurrence and play an important role for advanced HPSCC. In the present study, the cumulative incidence of 5-year loco-regional recurrence was statistically significant lower in primary surgery group (28.2%) than primary CCRT group (52.6%). There was no significant difference for the 5-year distant metastasis rate between the primary surgery group (21.2%) and the primary CCRT group (24.9%). These results may be explained by a decrease of locoregional recurrence that benefits survival in the primary surgery group.

The major difference between our study and the EORTC 24891 prospective trial is that the majority of our patients had stage IV disease (78.6%) in comparison to only 37% of patients with stage IV disease in the EORTC trial (23). In the present study, we also demonstrated that there was no significant difference between primary surgery and primary CCRT in term of OS (58.2% vs. 47.7%, P=0.881) and DFS (56.2% vs. 35.1%, P=0.239) in stage III disease. Patients with stage III disease could therefore be potential candidates for organ preservation treatment. A larger prospective randomized trial is needed in order to clarify this.

Our study had some limitations. Due to the retrospective nature, the patients’ characteristics at pre-treatment clinical stage were not balanced between surgical and non-surgical groups. There were more patients with T4 or N3 stage in the CCRT group than in the surgery group. Besides, the lack of information about treatment side effects or functional outcomes added to the review's limits. In addition, the follow-up time was not long enough and long-term follow-up is needed to confirm our findings.

For advanced HPSCC, pretreatment tumor volume may play an important role as a prognostic factor. William et al. (26) analyzed 404 patients with squamous cell carcinoma of the head and neck treated with definitive RT and found that patients with higher disease stage (T3–4) tend to have larger tumors and tumor volume may be a useful predictor of outcome. A similar finding resulted from retrospective analysis conducted by Anna et al. of review of 78 patients who underwent definitive CCRT for stage III–IV squamous cell carcinoma of the hypopharynx, oropharynx and larynx. And this study showed that primary tumor volume was a significant prognostic factor better than T or N stage (27). In our study, patients with advanced T stage (≥T3) were balanced in both groups, however, patients with higher T stage may present with higher pretreatment tumor volume and could be more favorable candidates for undergoing primary surgery than primary CCRT to achieve better local control and survival outcome.

Hypopharyngeal cancer is a distinct clinical entity of head and neck cancer with a relatively poor prognosis. In the present study, we demonstrated that treatment with primary surgery for patients with advanced stage HPSCC (stage III, IVA and IVB) is correlated with significant better overall, DFS and loco-regional control rates than primary CCRT. However, due to the limited sample size, further large prospective studies are still needed to identify patients with advanced hypopharyngeal cancer suitable for primary CCRT or organ preservation treatment.

Ethical Statement: The study was approved by the ethnic committee of our hospital. The IRB number for this study is 104-4642B.