Parotid tumors affected 1:100,000 people with the highest incidence found in Northern Queensland, Australia (1). About 75% of the parotid masses are benign and among them, pleomorphic adenoma accounted for the majority. On the other hand, primary parotid cancer is rather uncommon, representing only 2–3% of all head and neck malignancy (2,3). The most frequently encountered primary malignancy is mucoepidermoid carcinoma (MEC). Parotid gland metastasis is rare on the contrary. The most common site of origin is the skin of the cutaneous head and neck squamous cell carcinoma (cHNSCC), and it develops in 1–3% of patients (4). In the report, we present an unusual case of the parotid gland metastasis from cHNSCC, and the patient did not have the apparent skin lesion on the surface, radiological findings mimicked that of primary MEC. Special attention should be paid to the potential cause of diagnostic pitfalls.

This is a 56-year-old female who presented with a mass at the left pre-auricular region that slowly enlarged during the previous one year. At first, there was only a bulging mass without apparent skin lesion or skin defect. Because it was asymptomatic, the patient paid no attention to it. However, progressive left-sided facial palsy and numbness developed in 1 month before this admission. A firm mass of the left parotid gland was 4 cm in diameter on palpation (Figure 1). The severity of facial palsy was grade VI according to House-Brackmann Facial Nerve Grading System (4-6). Magnetic resonance images revealed a large lobulated mass measuring 51 mm × 55 mm × 56 mm within the left parotid gland, which invaded the ipsilateral masseter muscle and compressed the left lateral pterygoid muscle (Figure 2). Our experienced diagnostic radiologist made a provisional diagnosis of MEC. Other image studies showed no evidence of distant metastasis. The patient received left total parotidectomy with ipsilateral supraomohyoid neck dissection. 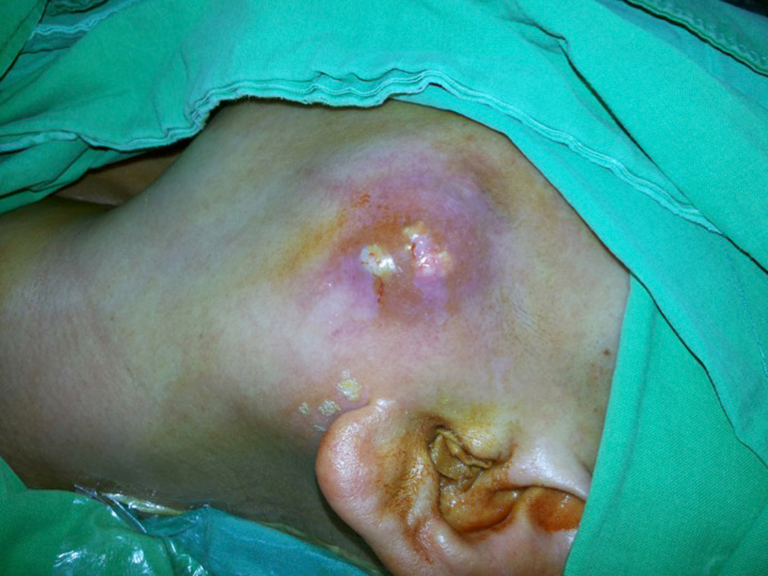 Figure 1 There was a firm bulging mass measuring 40 mm × 40 mm at the left pre-auricular area. Some white spots appeared on the overlying skin which was compatible with pus formation. 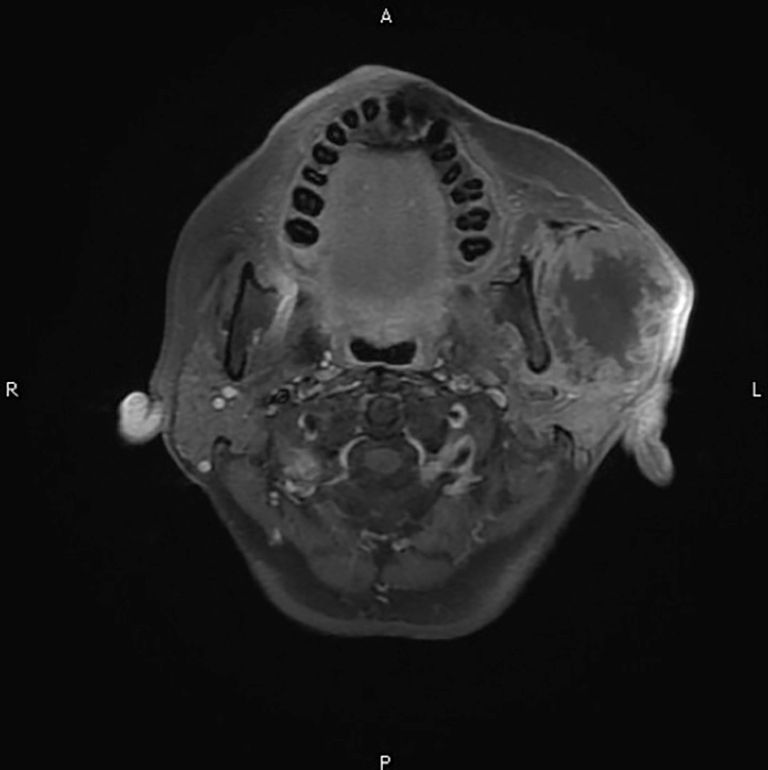 Figure 2 A magnetic resonance imaging of the head and neck demonstrated a lobulated mass measuring 51 mm × 55 mm × 56 mm with central necrosis within the left parotid gland, which involved the ipsilateral masseter muscle and compressed the left lateral pterygoid muscle.

The surgical specimen submitted for routine microscopic examination. Grossly, the tumor was well encapsulated and measured 62 mm × 50 mm × 40 mm in size. Histological features showed tumor cells with prominent nucleoli arranged in solid nest pattern accompanied by focal keratinization (Figure 3). The immunohistochemical analysis for mucin was negative which excluded the diagnosis of MEC. The final diagnosis revised to cHNSCC with parotid lymph node metastasis according to the pathologic findings. The cancer staging was pT0N3M1, stage IV based on 7th AJCC staging system: the T0 was assigned T category due to no primary found; the N3 was assigned N category due to intraparotid lymph node involvement with more than 6 cm in greatest dimension; and M1 was assigned M category due to parotid gland metastasis. According to the O’Brien staging system is P3N0. Then the patient received adjuvant radiotherapy five fractions per week with 66 Gy to the tumor bed and high-risk area including ipsilateral level II–III and involved facial nerve root retrogradely; 54 Gy to the ipsilateral level IV (Figure 4). The patient received concurrent chemotherapy with weekly cisplatin and completed treatment without any interruption or any intolerable acute toxicity. 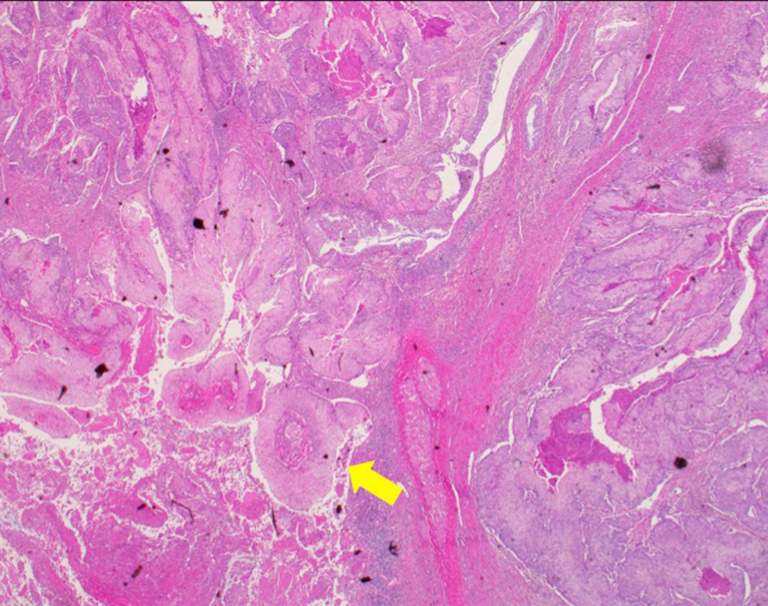 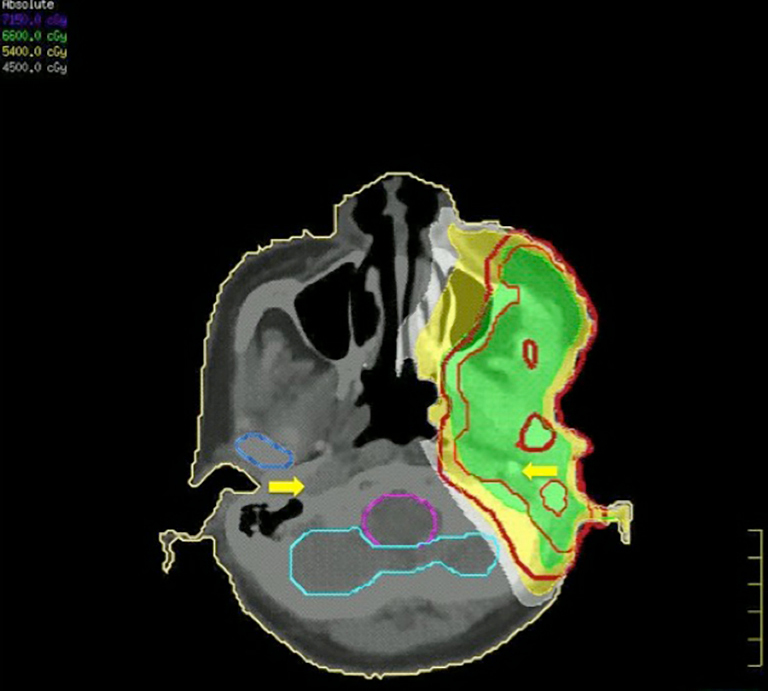 There are at least 20 subtypes of histology of primary major salivary gland tumor and around 5% of primary major salivary gland tumors are squamous cell carcinoma (7). The primary SCC of the parotid gland is a diagnosis by exclusion. According to the Tanvetyanon et al. stated the pathological finding of the primary SCC when arises in the salivary gland frequently replaces the whole glands and the small remnants of metaplastic ducts or degenerating acini within desmoplastic fibrotic background are always identified (7). Thus, the final diagnosis of this patient is regarded as metastatic SCC of the head and neck skin. In generally, cHNSCC constitutes about 20–25% of all skin cancer and is known to have a higher incidence of local-regional involvement (5). A systematic analysis, that carries out recently suggested that the risk of nodal metastasis for cHNSCC is about 5% and among them, the parotid gland nodes are most frequently involved (60–70%) (2). Risk factors for nodal involvement in cHNSCC include tumor size larger than 2cm, thickness over than 4mm, presence of lymphovascular invasion (LVSI), perineural invasion (PNI) or an immunocompromising condition.

Two different staging systems has proposed for cHNSCC: the American Joint Committee on Cancer (AJCC) TNM and the O’Brien staging systems. The AJCC TNM system has criticized as an inadequate staging approach for skin cancer because of its inability to discriminate between the number, size, and location of nodes. In TNM systems, parotid and cervical nodes had categorized into the same regional group. By contrast, O’Brien et al. suggested a staging system that separates node involvement into P (parotid node) and N (cervical node) stages respectively (Table 1) (10). The patient presented cutaneous hand and neck cancer with parotid gland involvement and parotid gland metastasis, thus, the O’Brien staging system might be more suitable for this patient. Recent publications recommended medically operable patients to receive surgery followed by postoperative RT (4-6). A retrospective study by Veness et al. demonstrated that surgery and adjuvant radiotherapy provide a lower loco-regional recurrence and better 5-year disease-free survival in cHNSCC patients with metastasis to the lymph nodes (5). Most recent studies suggested a regimen of adjuvant radiotherapy of 60 Gy to nodal region that has already been dissected and 50 Gy to the at-risk nodal area which has not been dissected (5).

Therefore, under the highly conformal radiotherapy, the identification and delineation of the clinical target volumes (CTVs) for regions at risk is the most importance. Eisbruch et al. reported guidelines for CTV delineation in the treatment of cHNSCC with PNI based on their systematic analysis of patterns of disease progression and treatment failures. Auriculo-temporal nerve and the greater superficial petrosal nerve (GSPN) are the communicating branches between the terminal branches of CN V and CN VII. The CTV for conformal RT should include CN V and VII due to high risk for primary tumor involvement (8).