Using Oncotype DX as an additional treatment decision tool in early breast cancer: a retrospective analysis from a single institution in Taiwan

Gene expression analysis is increasingly employed in breast cancer. Oncotype DX (Genomic Health, Inc., Redwood City, CA, USA) uses 21-gene RT-PCR assays to generate a recurrence score (RS) to quantify the likelihood of 10-year distant recurrence in patients with node-negative, estrogen receptor-positive breast cancer. The RS value is categorized into low-risk (<18), intermediate-risk [18–30], and high-risk (>30) groups. The magnitude of benefit from chemotherapy is greatest among patients in the high-risk group; those in the intermediate or low-risk groups demonstrates no significant benefit from chemotherapy (4). Whether patients have node-negative or node-positive breast cancer, the Breast RS test is both prognostic and predictive—providing both important prognostic information about the estimated risk of distant recurrence and the likelihood of adjuvant chemotherapy benefit. Oncotype DX is widely used in Western countries (4,5) and is commercially available in Asia, including China, Taiwan, Hong Kong and Singapore. However, studies in a Chinese population are scarce. This paper reports on the results of the application of Oncotype DX as an additional treatment decision tool in early breast cancer at Cheng Hsin General Hospital in Taiwan.

A retrospective study was conducted at Cheng Hsin General Hospital. In our hospital, physicians may offer the choice of Oncotype DX for pT1-2N0-1cM0 breast cancer after surgery. Early breast cancer patients who received Oncotype DX as an additional treatment decision tool for adjuvant chemotherapy after total or partial mastectomy from 2009 to 2014 were analyzed retrospectively. All patients’ clinical features were recorded including age, gender, pathological type, and treatment outcomes. From the Oncotype DX report, RS and ER, PR, and HER2 qualitative and quantitative unit scores were obtained. All patients signed the informed consent and allowed access to their medical records for this study. This study was approved by the Institutional Review Board of Cheng Hsin Hospital {[347]101A-46}. 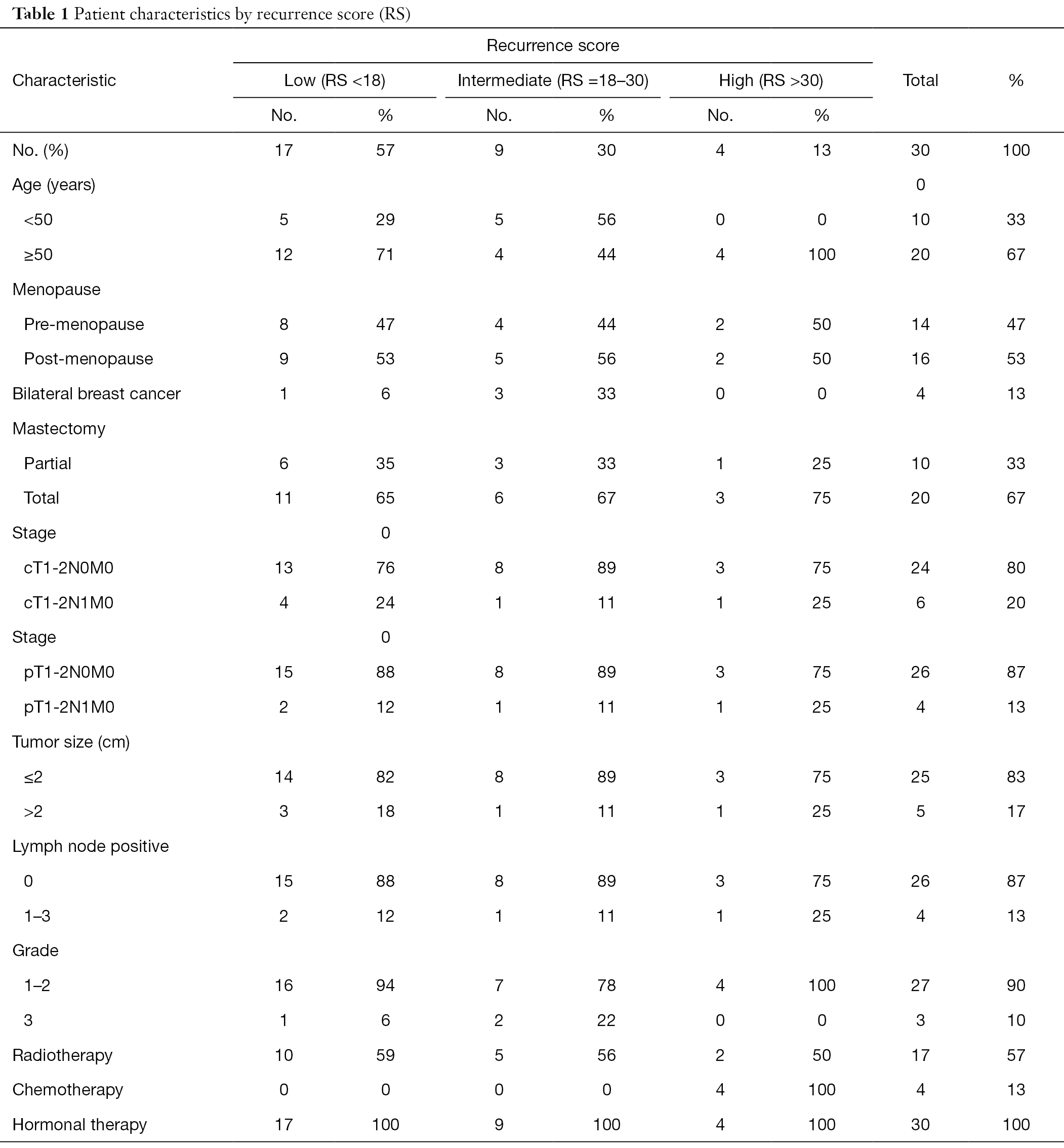 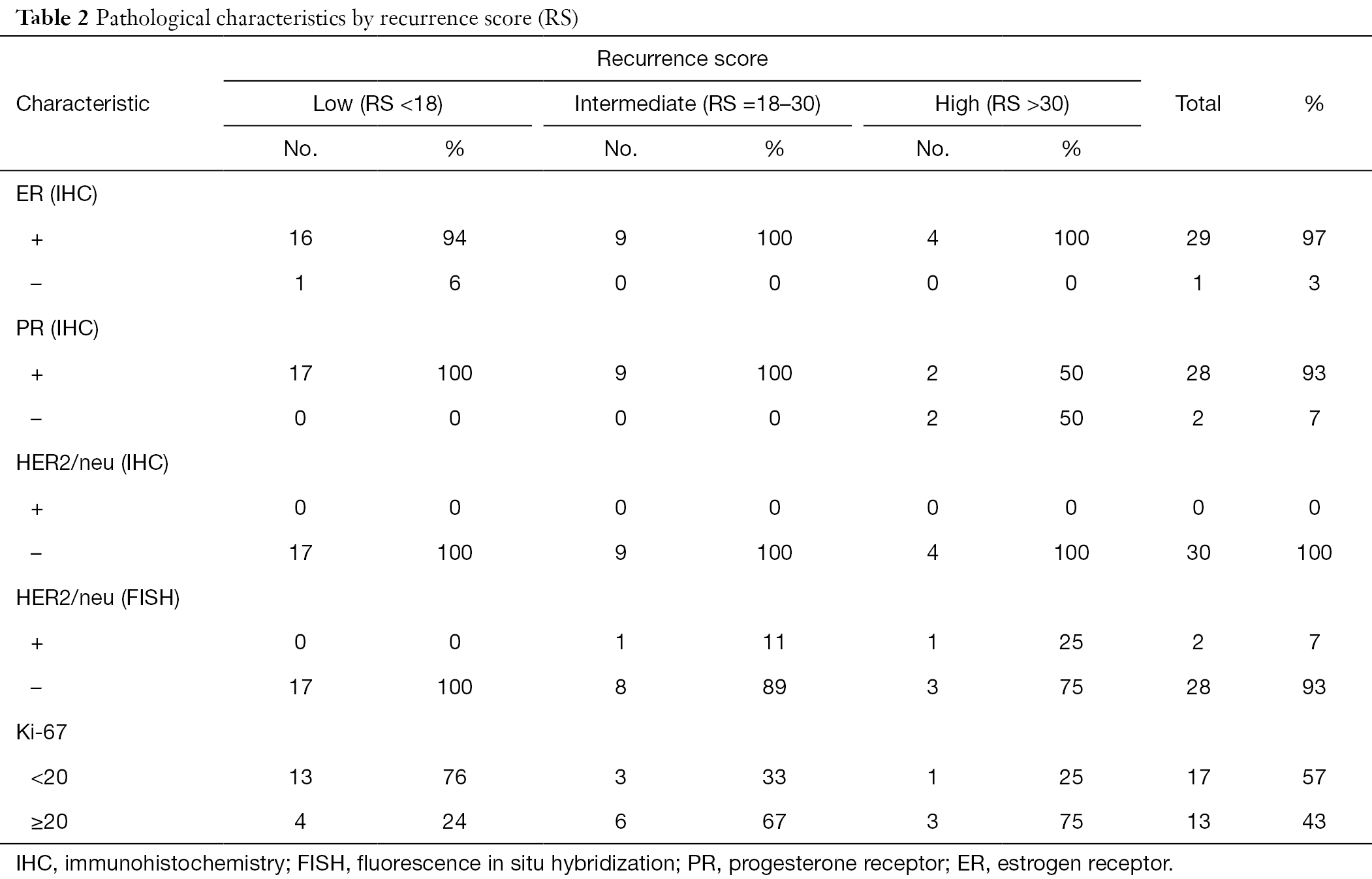 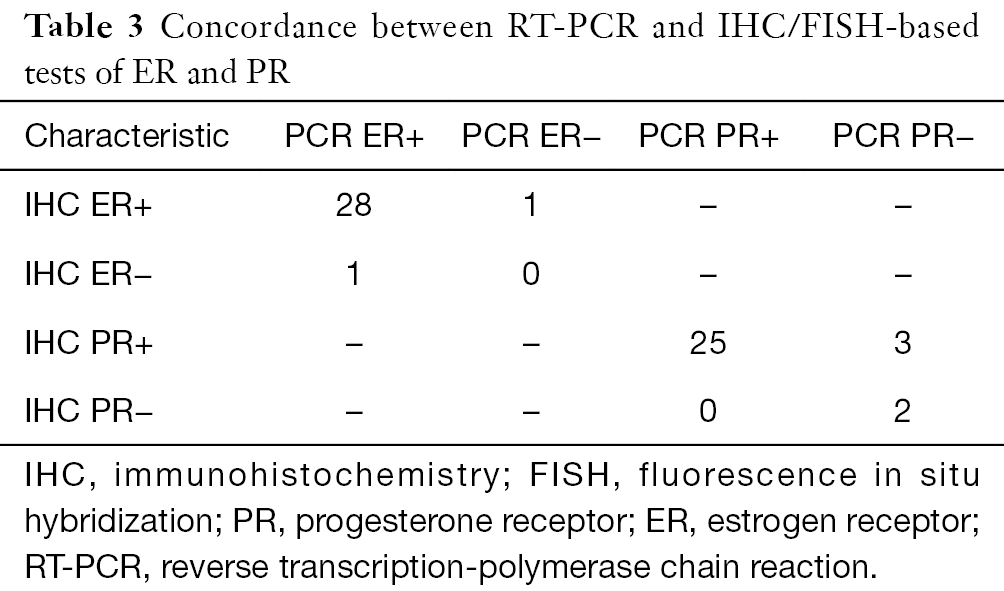 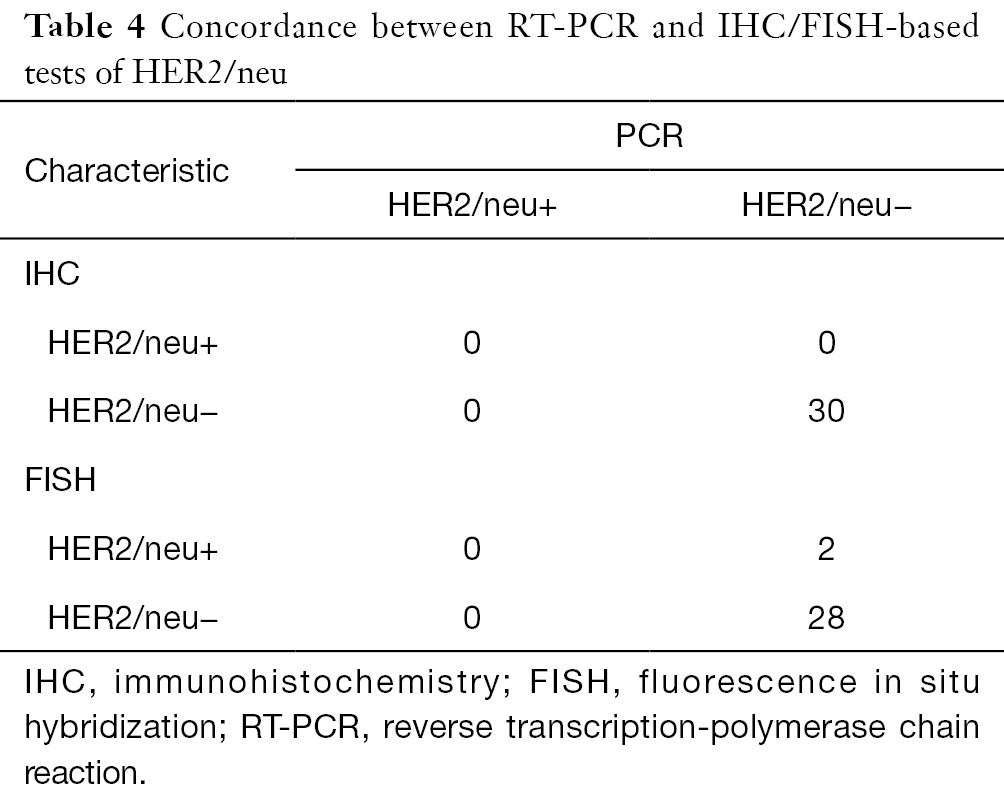 This study reports our experience of using Oncotype DX assay in Taiwan. It provides detailed clinical and treatment data of the users of Oncotype DX. With the increasing use of gene expression analysis in Taiwan, this study can be an important reference. The RS distribution in this study is similar to that of previous studies (4,6,7). It is notable that Oncotype DX has a significant impact on the decision-making of adjuvant chemotherapy in our cohort. All the four patients with high RS chose to receive adjuvant chemotherapy, and all of the low and intermediate RS groups chose not to receive adjuvant chemotherapy. All patients had no local recurrence and distant metastasis. Our results are consistent with published experiences and provide an important reference in support of the utility of the 21-gene assay for patients with early stage breast cancer across different ethnic groups (4,6,7).

We treat breast cancer patients under the guideline of our hospital. The guideline was mainly modified from the NCCN guideline. This guideline was revised at least once every year. Patients were diagnosed breast cancer by individual physicians, mostly by general surgeons. These cases will be discussed in breast cancer joint meetings. At least one medical oncologist will be present at the meetings. According to the conclusion of the meetings, the attending physician will discuss with the patients about the choice of Oncotype DX if indicated. All the 30 patients in this study did not want to receive adjuvant chemotherapy after surgery. After the Oncotype DX results were available, all four high RS patients, accounting 13.3% of the 30 patients (4/30), changed their decision and received adjuvant chemotherapy. According to Partin et al.’s study in the US, adjuvant therapy recommendations changed with the addition of the RS in 27–74% of cases (10). In Oratz et al.’s survey on medical oncologists who ordered the 21-gene RS assay, 86% of the oncologists made treatment recommendations before obtaining the RS; 51% changed their recommendations after receiving the RS (11). In a Spanish study, treatment recommendation changed in 32% of 107 patients enrolled: in 21% from chemo-hormonal to hormonal therapy and in 11% from hormonal therapy to chemo-hormonal (12). A Japan’s study found that recommendations changed in 33% of N0 and 65% of N+ patients (13). In Cheung et al.’s study in Hong Kong, treatment recommendation was changed for 31% patients after the Oncotype DX result was received (14). Of the changes in treatment decisions, 80% were changes to lower-intensity regimens (either equipoise or hormonal therapy). In another study in Hong Kong, chemotherapy recommendations (including changes in intensity of chemotherapy) were changed in 23.3% of the patients (15). In Wang el al.’s study in China, patients categorized at low, intermediate, or high risk were 70.9%, 26.7%, and 2.3%, respectively (16). Among them, 22.1% patients received adjuvant chemotherapy, including 4.9% cases of the low risk group and 60. 9% of the intermediate group, and 100% of the high-risk group. One case had recurrence and no distal metastasis or death was reported with 15.5 months median follow-up time. In our study, 56.7% had a low RS; 30% had intermediate RS; and 13.3% had high RS. All those with high RS received adjuvant chemotherapy, and none of the low and intermediate RS groups had adjuvant chemotherapy.

Our results show that the majorities of patients aged over 50 (100%), with PR(+) (50%) and Ki-67 above 20 (75%), tend to be high RS. A previous study shows that younger women might benefit more from chemotherapy than older women (3). However, all the patients with high RS in our study were aged over 50. The Oncotype DX assay determines ER and PR status (positive or negative) by measuring gene expression at the RNA level. There is a high concordance between ER and PR status as determined by the Oncotype DX assay and by IHC, which measures ER and PR gene expression at the protein level. This is consistent with previous studies (17-19). Our study found that one patient was ER(−) by IHC and ER(+) by Oncotype DX assay. This patient finally chose to receive hormonal therapy.

There are several limitations to this study. The sample size is small. It is a retrospective study. The follow up time is too short to say it will be no recurrence in the next 10 years especially for hormone receptor positive patients. For Oncotype DX intermediate risk patients, the recurrence rate is not low enough for patient to decide to have adjuvant chemotherapy or not. Since the Oncotype DX assay is self-pay and has not been covered by national health insurance in Taiwan, patients who undergo this assay have relatively higher income.

This study offers our experience of using Oncotype DX in Taiwan. The results show a significant impact on the patient’s decision of choosing adjuvant chemotherapy for early breast cancer patients. To confirm these findings, large scale studies are warranted.

Ethical Statement: This study was approved by the Institutional Review Board of Cheng Hsin Hospital {[347]101A-46}.