Adenoid cystic carcinoma (ACC) of head and neck is a relatively rare malignancy. It accounts for about 1% of all malignancies in the head and neck region and for about 22% in the major and minor salivary glands (1). ACC displays dual cell composition of peripheral myoepithelial and inner ductal tubular and cribriform patterns, and manifests indolent and variable biological behavior (2). Because of slow and insidious growth, ACC is often discovered at a late and locally advanced stage, especially in non-salivary gland area (3-5).

The main treatment for ACC is surgery. After surgery, adjuvant radiotherapy may confer a benefit on loco-regional control and survival in patients with high-risk pathological features, such as advanced T stage, close or positive margin, or perineural invasion (6-9). Nevertheless, relatively high rates of distant metastasis (especially to the lungs) pose a major obstacle in the management of ACC (6,10,11). Current published studies show low response rates and short response duration of chemotherapy and molecular therapies (12,13). One of the most important enzymes in ACC was c-kit protein, which was identified in 80–90% of the ACC tumor (14,15). Imatinib is a c-kit tyrosine kinase inhibitor that is used in cancer treatment. Several studies researched the benefit of imatinib in ACC, but no obvious response was noted in advanced ACC (16,17).

Because of the indolent nature of ACC, improving local control and reducing distant metastasis control may warrant different treatment strategies. Prognosis may also differ depending on the site of primary origin. Therefore, based on the evidence we currently have, we aimed to explore the clinical features and prognosis of ACC in the head and neck region in our institution.

We collected patients diagnosed as adenoid cystic carcinoma (ACC) in the head and neck region between January 1995 and December 2014 from the database of National Cheng Kung University Hospital. We retrospectively reviewed medical records of these patients. Patients who were diagnosed as head and neck ACC and received treatment under curative intent were included in this study. We excluded patients who had previous irradiation to head and neck region, severe systemic disease (e.g., history of cirrhosis, heart failure, coronary artery disease, or stroke), previous malignancy, planned radiation dose under 50 Gy, and patients with distant metastasis at the time of diagnosis.

Because these patients were treated from 1995 to 2014, RT technique was divided into two major categories. Before 2006, conventional 2-dimensional or 3-dimensional (2D/3D) RT was the major RT technique for these patients. In 2D/3D RT era, elective nodal irradiation was performed according to the clinician’s judgement. After 2006, inverse planning software and intensity-modulated radiation therapy were used. The high-risk clinical target volume (CTV) was prescribed to 66–70 Gy, which covered the primary tumor, surgical tumor bed, area where soft tissue was invaded, the risk area along the cranial nerve, and extracapsular spread (ECS). The intermediate-risk CTV was prescribed to 59.4–64.8 Gy, which included the entire surgical bed and the involved neck levels. The low-risk CTV was prescribed at 46–50 Gy and included uninvolved neck levels at risk for occult micrometastases. Radiotherapy was given in conventional fractionation, 1.8–2 Gy per fraction for 5 consecutive days per week. Cisplatin was the most frequently used concurrent chemotherapy regimen, with 100 mg/m2 delivered once every 3 weeks or 40 mg/m2 delivered once per week.

Patients were followed every 1 to 3 months in the first year, every 3–6 months in the second and third year, and 6–12 months in the following years after completion of treatment. Comprehensive physical examination was performed during each visit. Imaging studies such as computed tomography (CT) or magnetic resonance imaging (MRI) and chest X-ray were arranged 2 to 3 months after end of radiotherapy, and then once annually or as clinically indicated. 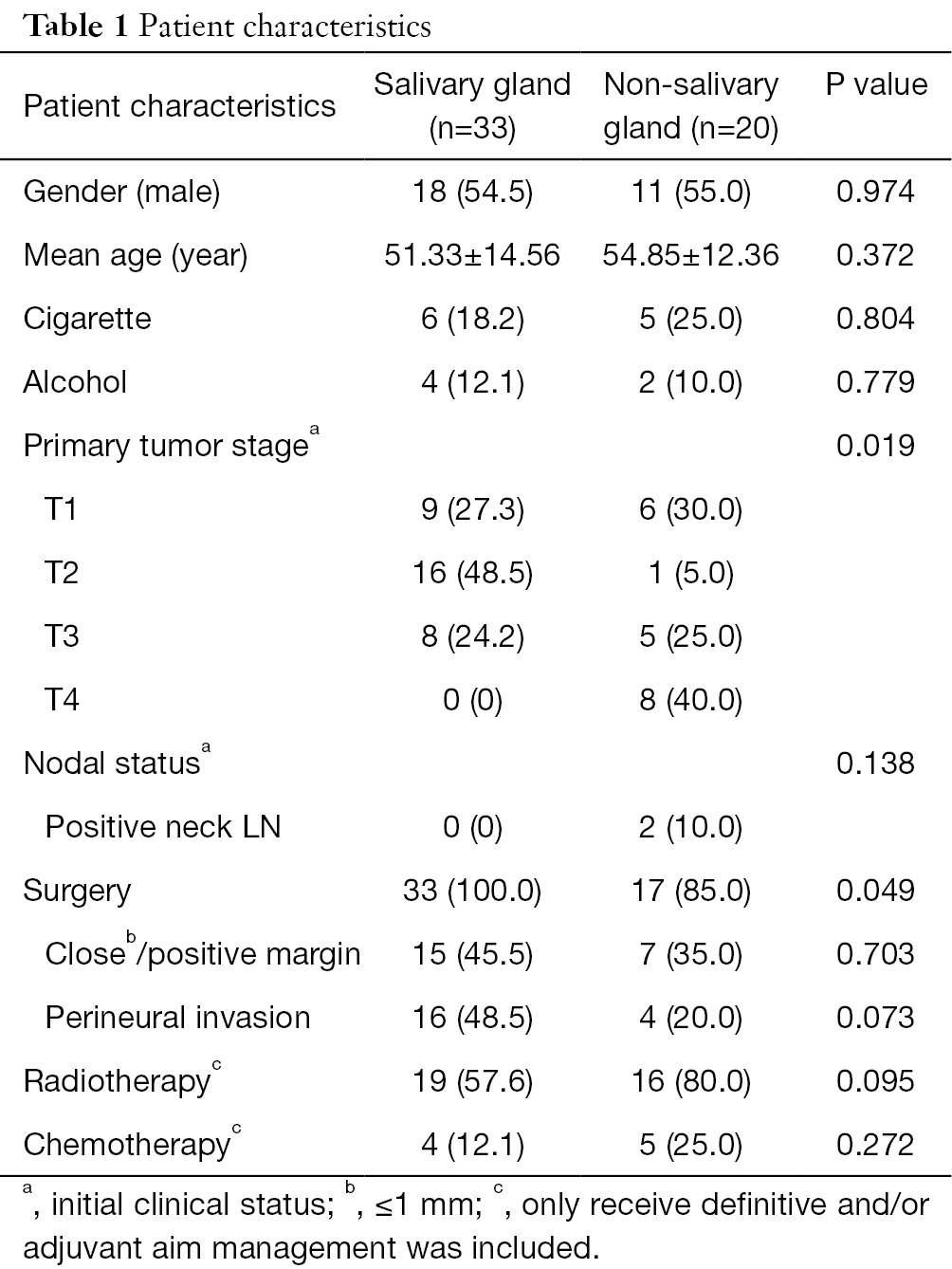 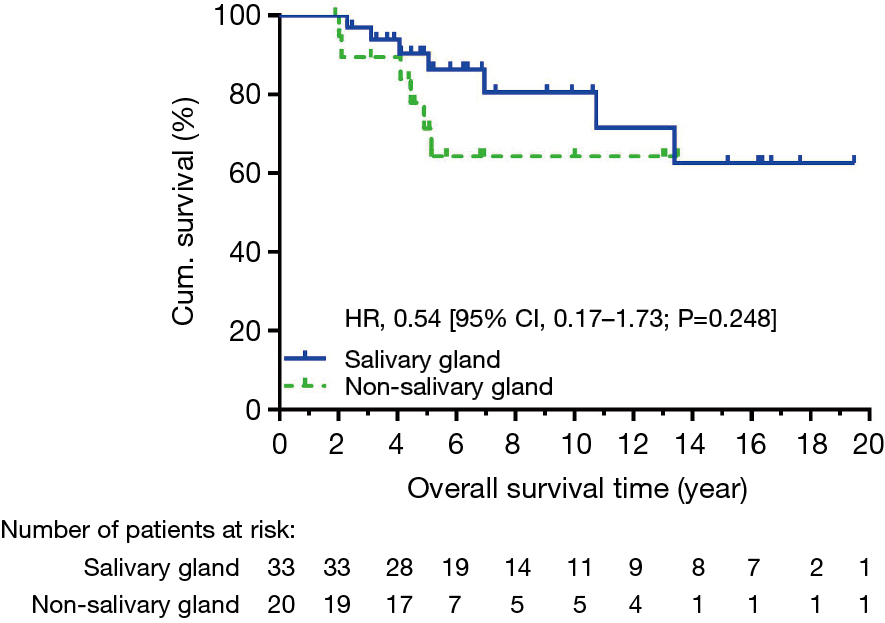 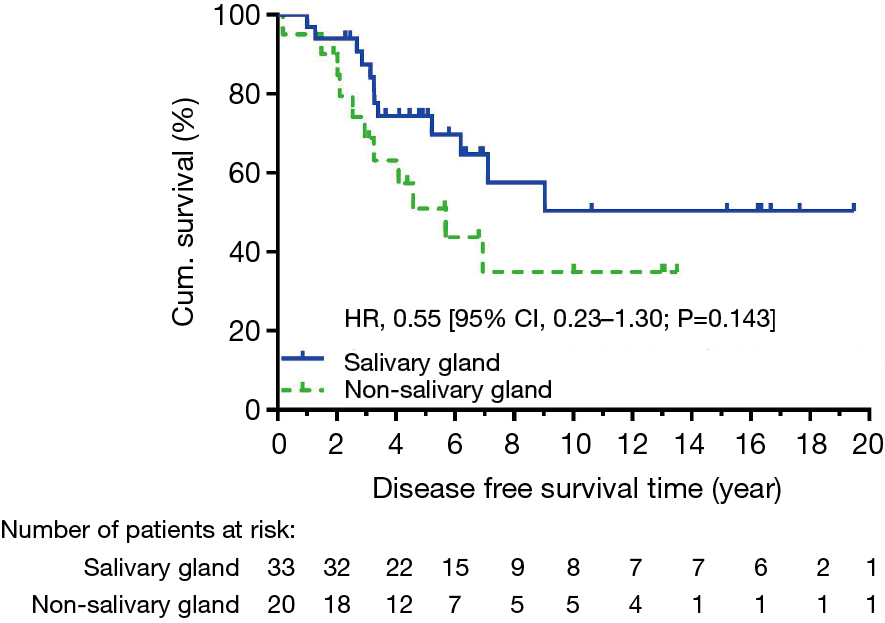 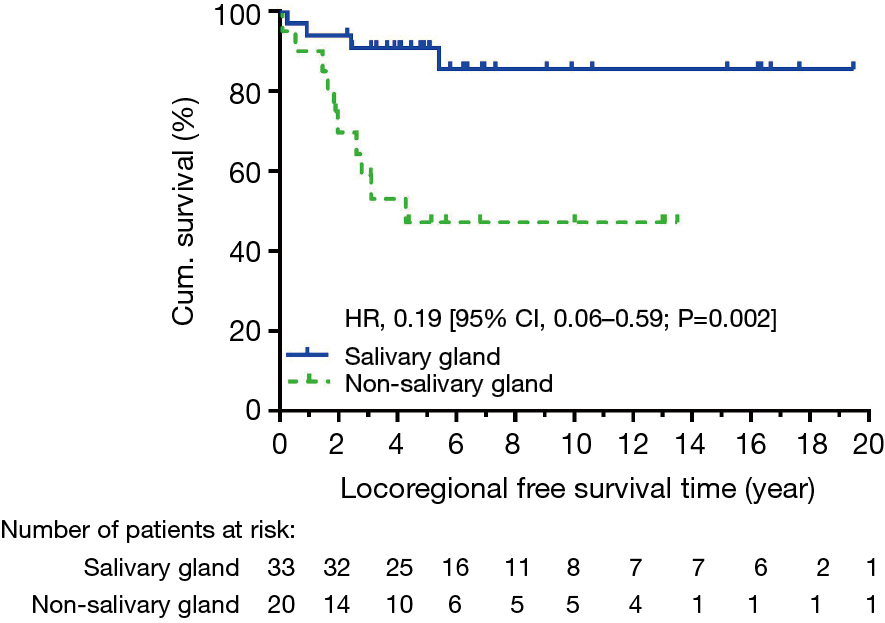 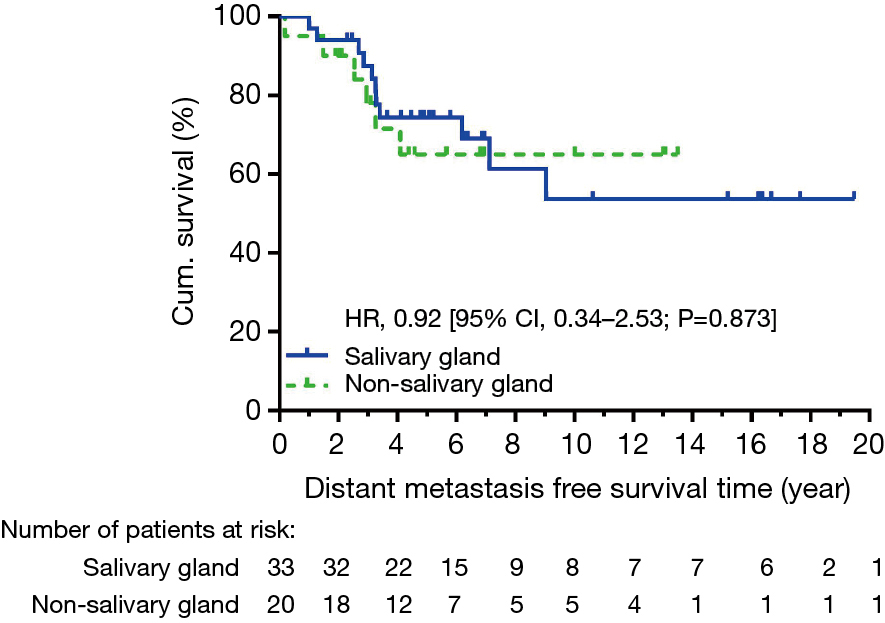 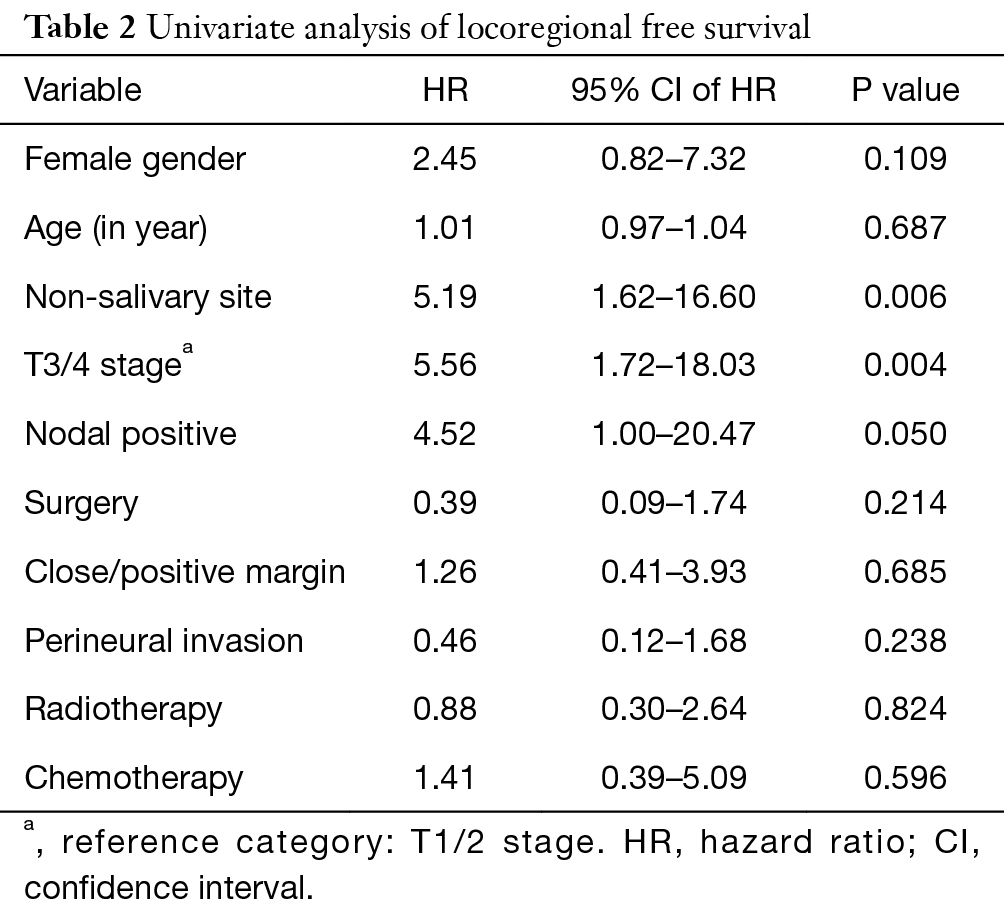 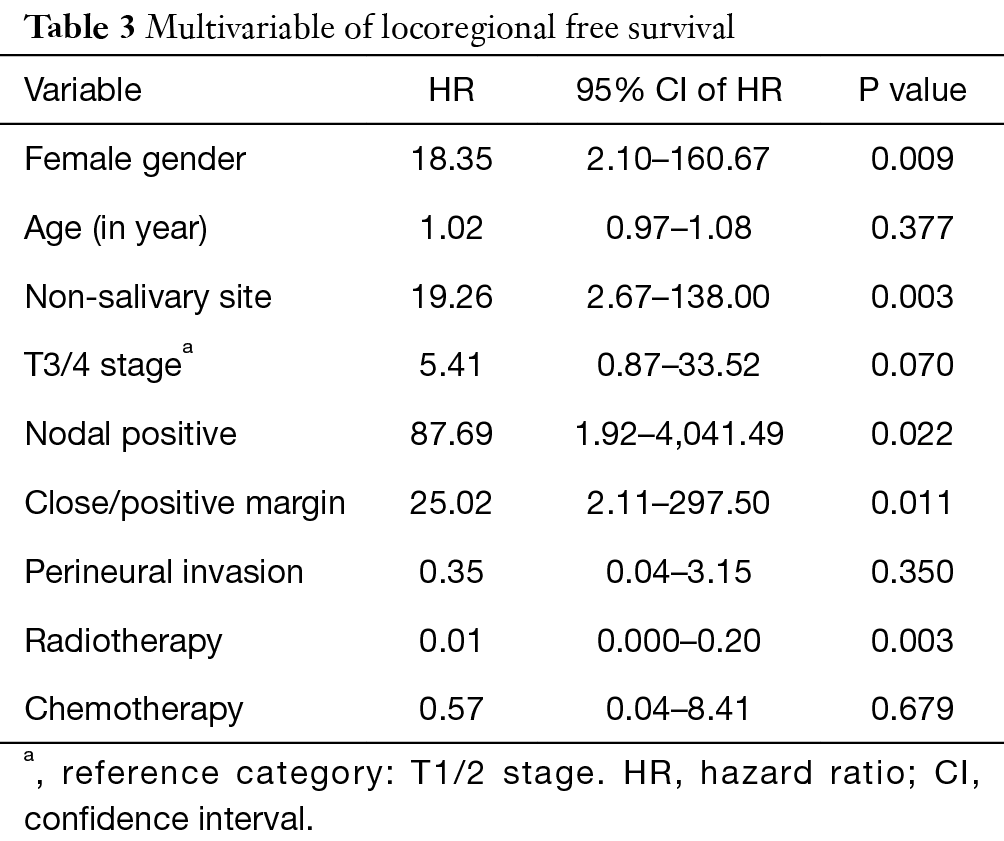 ACC is a relatively rare disease in the head and neck region (18). In a period of 19 years, only 53 patients seeking treatment in our institution had this cancer. We found that non-salivary gland ACC had worse locoregional control rate than salivary gland ACC, but no difference was demonstrated in DFS or OS. After surgery, adjuvant radiotherapy conferred benefit on locoregional control. Limited neck lymph node involvement was noted in initial status and no neck nodal recurrence was detected in our series.

In our series, only 2 of 53 patients had initial clinical nodal metastasis, and no patient experienced a nodal recurrence. Suárez et al. showed the variable incidence of cervical nodal metastasis in head and neck ACC (HNACC), which ranged between 3-16%, while the incidence of nodal recurrence is 0-14% after treatment (25). However, there is currently no consensus on the benefit of elective neck dissection (END) in HNACC. Lee et al. showed worse OS in nodal-positive patients and recommended END for regional control (26). Amit et al. reported higher nodal involvement (37%) in oral cavity ACC, and suggested END in these patients (27). However, several studies showed limited survival benefits of routine END (25,28,29), and recommended END should only be considered in selective patients with higher positive nodal ratio (30) or high risk oral and oropharyngeal locations, especially when postoperative radiotherapy was not planned (25).

There were several limitations in our study. First, this study is retrospective in nature, thus management strategies are prone to patient selection. However, we collected consecutive HNACC patients under curative intent treatment in our institution, which adequately represents clinical practice. Second, our study only included patients who were diagnosed in our institution. Due to rarity of this disease, patient numbers may be inadequate to draw definite conclusions. Third, treatment techniques (3D-confromal radiotherapy or IMRT) may differ as the cohort of patients spanned during a long period of time. Surgical techniques, pathology consensus, and treatment guidelines have evolved during this period. In conclusion, non-salivary gland ACC has a worse loco-regional control rate than salivary gland ACC. Adjuvant radiotherapy confers a benefit on loco-regional control, but the benefit of elective nodal irradiation could not be evaluated in this study. In these patients, the most common pattern of failure was distant metastasis, especially to the lungs. No benefit form cisplatin-based chemotherapy was found. Further research is warranted to improve outcomes in these patients.

We thank Clare Lear for editing this manuscript.