Salvage radiotherapy for biochemical recurrence after radical prostatectomy: experience of a single center

Prostate cancer was the fifth most diagnosed cancer and the seventh most common cause of cancer death among males in Taiwan with a crude incidence of 41 per 100,000 (1). Radical prostatectomy (RP) has been one of the standard definitive treatment for localized prostate cancer. However, many studies showed that around 25–40% of patients develop biochemical recurrence (BCR) following RP for localized prostate cancer (2,3). Salvage radiotherapy (SRT) for BCR after RP has been reported to improve outcomes (4-8). Therefore, SRT is one of the standard treatment for BCR following RP (9-11). However, even patients received SRT, the 5-year biochemical disease-free survival rates remained 50–60%. The identification of useful predictors is very important to select patients at high risk of BCR after RP. Recent retrospective studies have reported various prognostic factors related to PSA failure after SRT (6,12-18). The prognostic factors included the pathologic Gleason score, surgical margin status, seminal vesicle invasion, pre-RT PSA level, PSA doubling time.

Most of the studies of SRT following RP are reported by westerner. There were few studies from Asia (19-21). Thus, we investigated the outcome and prognostic factors of patients who received SRT for BCR after RP and whether concurrent with androgen deprivation therapy (ADT) could improve outcomes at a single center.

In our institution, 63 patients underwent RP with pelvic lymph node dissection and post-operative RT for prostate cancer between January 2004 and December 2012 (Figure 1). Of 63 patients, 8 patients who were pN1 and 7 patients who received adjuvant RT were excluded from the study. The remaining 48 patients were included in this study. Among them, 5 patients were previously treated with ADT and 8 patients were treated concurrently with ADT. All patients had done systemic survey and showed no distant metastasis before they received SRT. We reviewed the medical records of the 48 patients receiving SRT for BCR after RP.

Tumors were classiﬁed according to the 7th, ED, 2010 AJCC staging system (22). Adjuvant RT was defined as immediate RT given within 6 months after RT with an undetectable PSA (<0.2 ng/mL) (23). The definition of SRT was patients receiving RT on post-RP serum PSA failure (at least two consecutive PSA elevations ≥0.2ng/mL) or persistent PSA after RP. SRT was delivered with intensity modulation radiotherapy (IMRT) technique and was prescribed at a total dose of 60–75.6 Gy (median 64 Gy) with a daily dose of 1.8–2.0 Gy, 5 days per week. The clinical target volume (CTV) was defined as adequately covering prostatic fossa. Elective pelvic lymphatics irradiation for 45 Gy was delivered in 5 patients (10.4% of the total group). The elective pelvic lymphatics irradiation was judged by individual physicians. Written informed consent was obtained from all patients before the start of SRT, and patients were informed of both the beneﬁts and complications of SRT.

After RP and SRT, prostate-specific antigen (PSA) levels were followed up every 3–6 months during the first 5 years, then at least once per year. BCR after SRT was deﬁned as the Phoenix Definition, a rise by ≥2 ng/mL above the nadir PSA. Early SRT was defined as started RT before the PSA level >0.5 ng/mL. Acute toxicities associated to RT was recorded according to the Common Terminology Criteria for Adverse Events version 3.0. 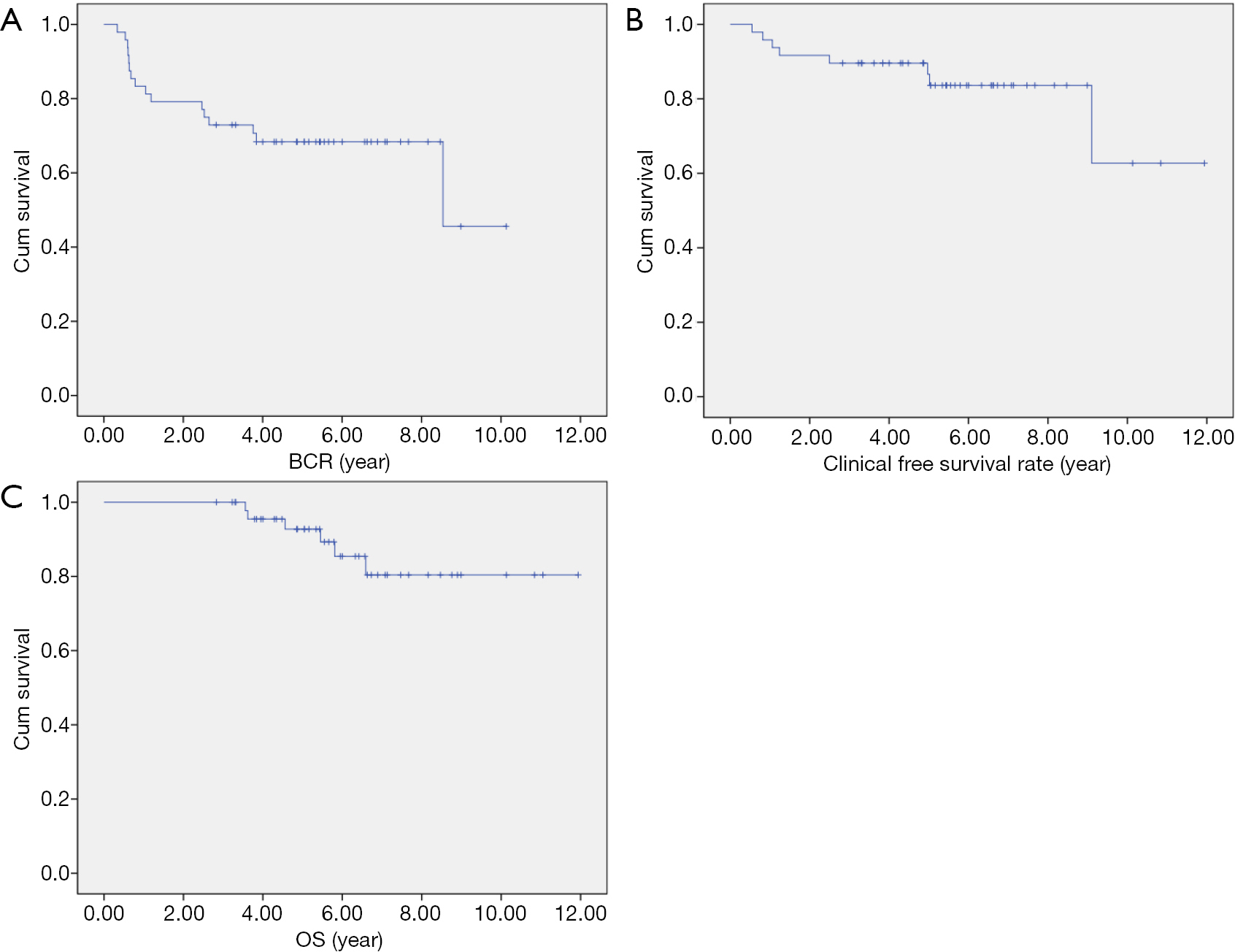 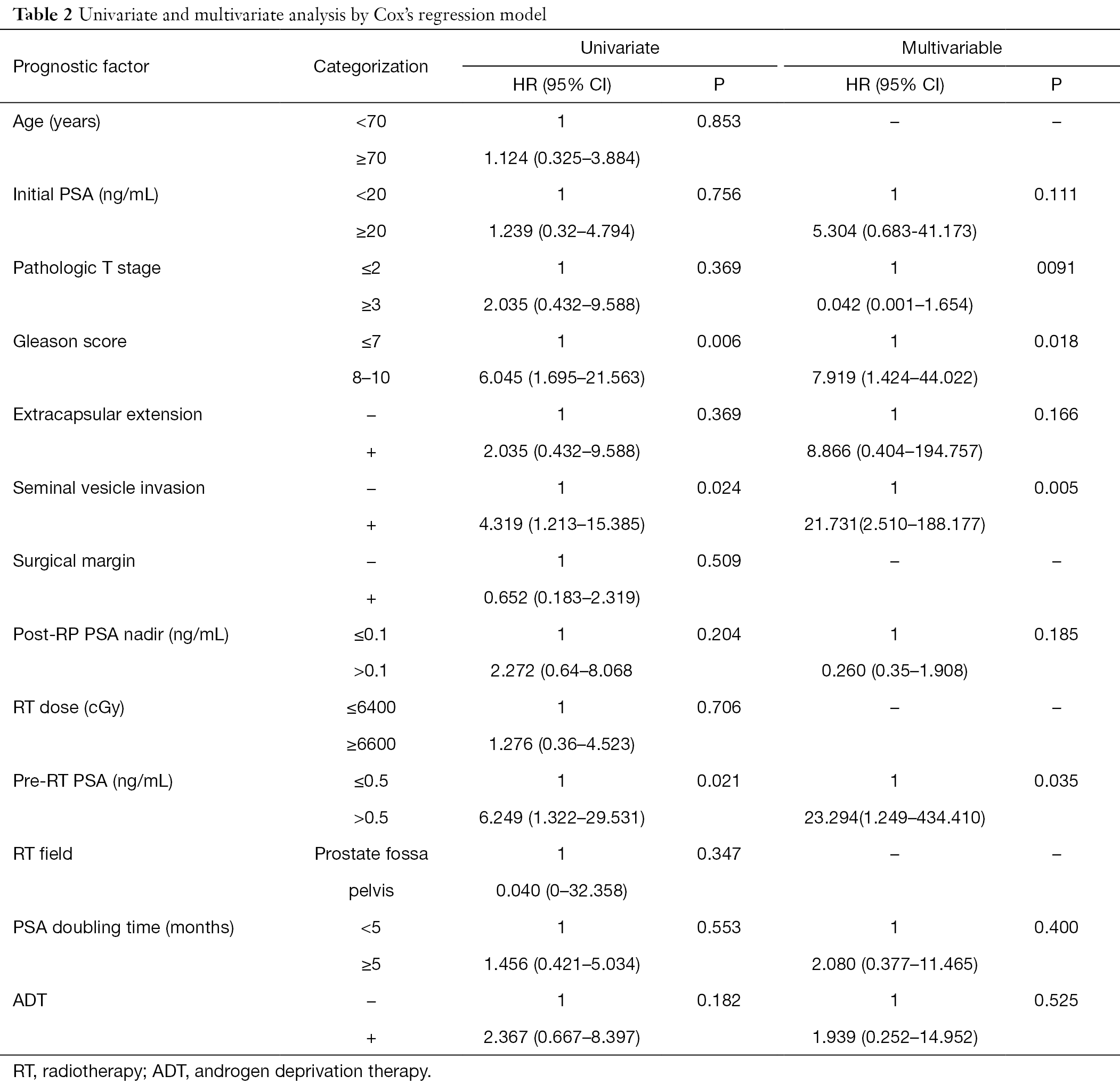 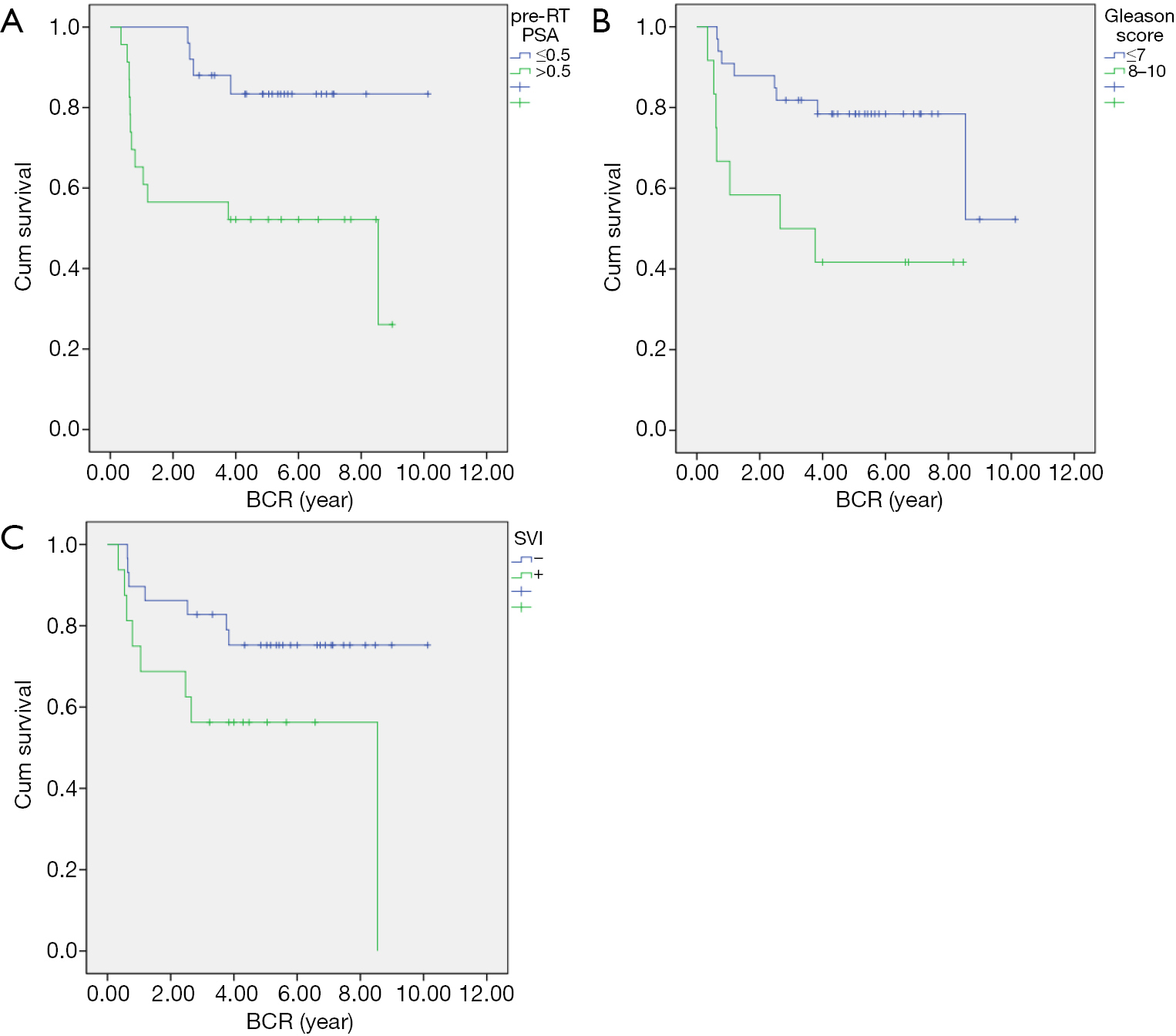 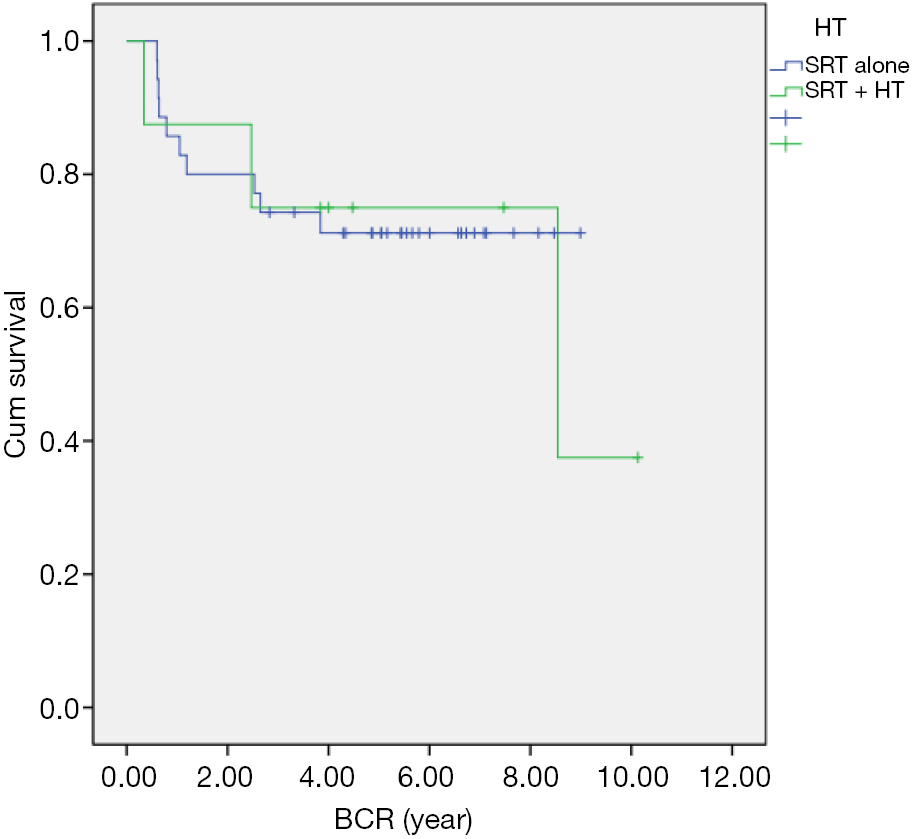 Several prognostic factors for SRT have been found, such as pre-RT PSA levels, Gleason scores, seminal vesicle invasion, surgical margin status, and PSA doubling time (13,17). A large systemic review of 41 retrospective studies with 5,597 patients on SRT following RP illustrated that the pre-RT PSA levels was significantly associated with BCR-free survival (24). There was an average of 2.6% loss of BCR- free survival for each incremental 0.1 ng/mL of PSA at the time of SRT. Although current guidelines only recommend a pre-RT PSA <1.0 ng/mL (9,11), several studies have reported that patients who received SRT at pre-RT PSA ≤0.5 ng/mL had better outcomes (4,6,19,25-27). There were no clear definitions for PSA persistence and PSA recurrence. Consensus has not defined a threshold level of PSA below which it is truly undetectable. Retrospective studies reported patients with undetectable post-RP PSA had better disease-free survival, the threshold levels were 0.05 and 0.01 ng/mL, respectively. Recent data from Taiwan reported a post-RP PSA nadir ≤0.1 ng/mL was a significantly favorable prognostic factor (28). In this study, the signiﬁcant prognostic factors were the pre-RT PSA level, Gleason score, and seminal vesicle invasion, and were compatible with the former studies. The 5-year BCR-free survival rate was significantly higher than late SRT group, 83.4% and 52.2%, respectively, P=0.007. Surgical margin, PSA doubling time, and post-RP PSA nadir revealed a slight trend, but were not significant predictive factors in univariate or multivariate analysis. This could be due to the fact that this retrospective study consisted of a limited cohort of heterogeneous patients.

Retrospective data suggested an improvement in BCR-free survival if short-term ADT is added to SRT (29). There were two phase III randomized trials investigating whether the addition of ADT to SRT in patients with PSA failure after RP would improve BCR-free survival and overall survival. In the RTOG 9601 study (30), 760 patients status post RP with pT2-3N0 who had or developed elevated PSA levels from 0.2 to 4.0 ng/mL underwent SRT and were randomly assigned to anti-androgen therapy (24 months of bicalutamide, 150 mg daily) or a placebo, during and after RT. After a median follow-up of 13 years, both significantly improved 12-year overall survival and BCR in the combining ADT with RT group compared with the RT-only group (76.3% vs. 71.3% and 44% vs. 67.9%, respectively). In the GETUG-AFU 16 trial (31), 743 patients who had rising PSA of 0.2 to 2.0 µg/L following RP were randomly assigned to RT alone and RT plus goserelin. Five-year progression-free survival in the RT plus goserelin group was signiﬁcantly better than in the RT-only group (80% vs. 62%; P<0.0001). The ongoing RADICAL-HD trial compares RT alone, RT plus short course ADT (6 months), and RT plus long course ADT (2 years). In our study, the combined SRT with ADT did not improve the time to biochemical progression compared with SRT-only (P=0.928). The result may be due to the limited number of patients. Only 8 patients received combined modality therapy, though we included patients treated with LHRH agonists and/or anti-androgens. Based on the two randomized control trials, updated practical guidelines (e.g., NCCN guideline) discussed the addition of ADT to SRT (10). However, we have not yet reached consensus on this within our institution.

Five patients (10.4%) received pelvic RT and none of them developed BCR. Three patients (6.3%) developed pelvic LN relapse and they all received prostate fossa irradiation without pelvic RT. However, pelvic RT was not a significant prognostic factor in univariate analysis (HR: 0.04, P=0.347). Again, the result may be due to the limited number of patients. Further studies are needed to verify the ideal field for SRT.

There were only a few studies reported from Asia and from Taiwan. In these studies, the BCR-free survival rate at 5 years was 50–70%. One study from Taiwan reported outcomes of SRT after RP, and the 5-year disease-specific survival and BCR rate were 95% and 60%, respectively (28). The 5-year PSA relapse-free rate was 68.4% in our study, and it is in line with other studies. We demonstrated the outcomes of various prognostic factors including age, performance, initial PSA levels, Gleason scores of surgical specimen, pathologic stages, surgical margin statuses, seminal vesicle invasion, post-RP PSA nadir, pre-RT PSA levels, RT dose, RT field, and whether previously treated with or concurrent with ADT.

This study was limited by its retrospective design, patients from single center, and a relatively small number of patients. Selection bias is another limitation. At our institution, the selection of the post-RP management was mainly dependent on the patient and the urologist. Some patients with adverse risk after RP received adjuvant RT rather than observation first, and some received hormone therapy. These contributed to a selection bias.

SRT was an effective treatment for BCR following RP with tolerable toxicities in Taiwanese patients. The pre-RT PSA level was a prognostic factor for PSA relapse after SRT. Early SRT for patients with pre-RT PSA levels <0.5 ng/mL, Gleason score <8, and non- seminal vesicle invasion were associated with better biochemical-recurrence-free survival. Further randomized controlled trials are required to confirm the efﬁcacy of early SRT following RP for prostate cancer. The use of concurrent ADT with SRT needs further discussion.

Ethical Statement: This study was approved by the Institutional Review Board of China Medical University Hospital (CMUH106-REC1-060).