For early stage breast cancer, it is recommended to conduct breast conservative surgery with breast irradiation. Adjuvant radiotherapy has been proven to reduce local failure rate and mortality rate (2,3). Early Breast Cancer Trialists’ Collaborative Group (EBCTCG) meta-analysis proved that radiotherapy avoided one breast cancer death over 15 years for every four avoided local recurrences in 10 years (2). However, EBCTCG meta-analysis also found that there was excess mortality rate for post-BCS group after 15 years follow up. Main causes of the excess mortality for these patients were heart disease and lung disease (2). Kim et al. also showed that women received radiotherapy for breast cancer treatment had a 1.76-fold higher risk of cardiac disease death and 1.33-fold higher risk of lung disease death than those who did not receive radiotherapy (4). Darby et al. revealed that with the increase of heart mean dose per gray, the rate of major coronary event increases 7.4% linearly (5).

For breast cancer patient receiving adjuvant radiotherapy, normal organ radiation exposure should be as low as possible. Several methods including prone position, intraoperative radiotherapy, deep inspiration breath hold technique (DIBH), etc. were developed aiming to decrease lung and heart dose. The purpose of DIBH technique is to increase the lung volume and also the distance between irradiated target and heart, thus the radiation exposure of heart, left anterior descending artery (LAD), and lung will be reduced during treatment (6,7). The DIBH technique can be performed with instruction only or various assistant tools, such as Real-time Position ManagementTM (RPM) system or Active Breathing Coordinator (ABC) devices. In our institution, RPM system is employed yet we noticed that although DIBH reduces the radiation exposure to organ at risk (OAR), the effectiveness varies for each patient. It is noticed that in the treatment some patients have struggled to fulfil the instruction of DIBH technique even with the RPM system. The data in this study was collected from one institution, associated physical factors changing during DIBH was evaluated in order to enhance DIBH effectiveness.

Patients were immobilized with customized vacuum bag. Breath hold while deep inspiration was requested. The RPM system was used to monitor patient’s breath hold condition. The marker box with reflective dots was put on the end of chest wall at the level of diaphragm and was tracked by infrared tracking camera. Helical computed tomography (CT) simulation with 2.5mm between each slice by GE-RT590 was performed. Both free breath (FB) CT scan and DIBH CT scan were acquired. CT simulation images were imported into Varian Eclipse version 11 to proceed radiotherapy treatment planning.

Dose of 50 Gy was prescribed to the PTV. For each patient, two treatment plans using unopposed tangential IMRT technique were generated based on FB CT and DIBH CT images. All plans met the same criteria of treating 95% of PTV to at least 47.5 Gy and maximum hot spots less than 110%. In order to evaluate the effect to dose distribution contributed by DIBH clearly, primary tumor bed boost was not discussed in this study to diminish the uncertain effect caused by different tumor bed location of each patient. Dose of ipsilateral left lung, contralateral right lung, total lung, LAD, and heart was calculated and dose-volume histograms were constructed. Maximum dose (Dmax), minimum dose (Dmin), mean dose (Dmean), the minimum dose received by 30% of the target volume (D30), percentage of organ volume receiving 5 Gy (V5), percentage of organ volume receiving 20 Gy (V20), and percentage of organ volume receiving 30 Gy (V30) were calculated for each OAR.

CT simulation image was reviewed from cranial to caudal direction. The first appearance of lung tissue on axial view was defined as upper chest wall border. Half way (middle level) between the first appearance of diaphragm and the last image of lung tissue on axial CT was designated as the diaphragm level. The level where either left or right atrium observed first was defined as upper border of heart level. Chest wall was divided into upper and lower part according to upper border of heart.

Data were summarized as means and standard deviation. Wilcoxon signed rank test was used to examined the significance of difference. Pearson correlation test was used to examine the correlation significance among each physical factor and OAR radiation exposure volume and dose. This study was approved by the institutional review board as CGH-P104032. 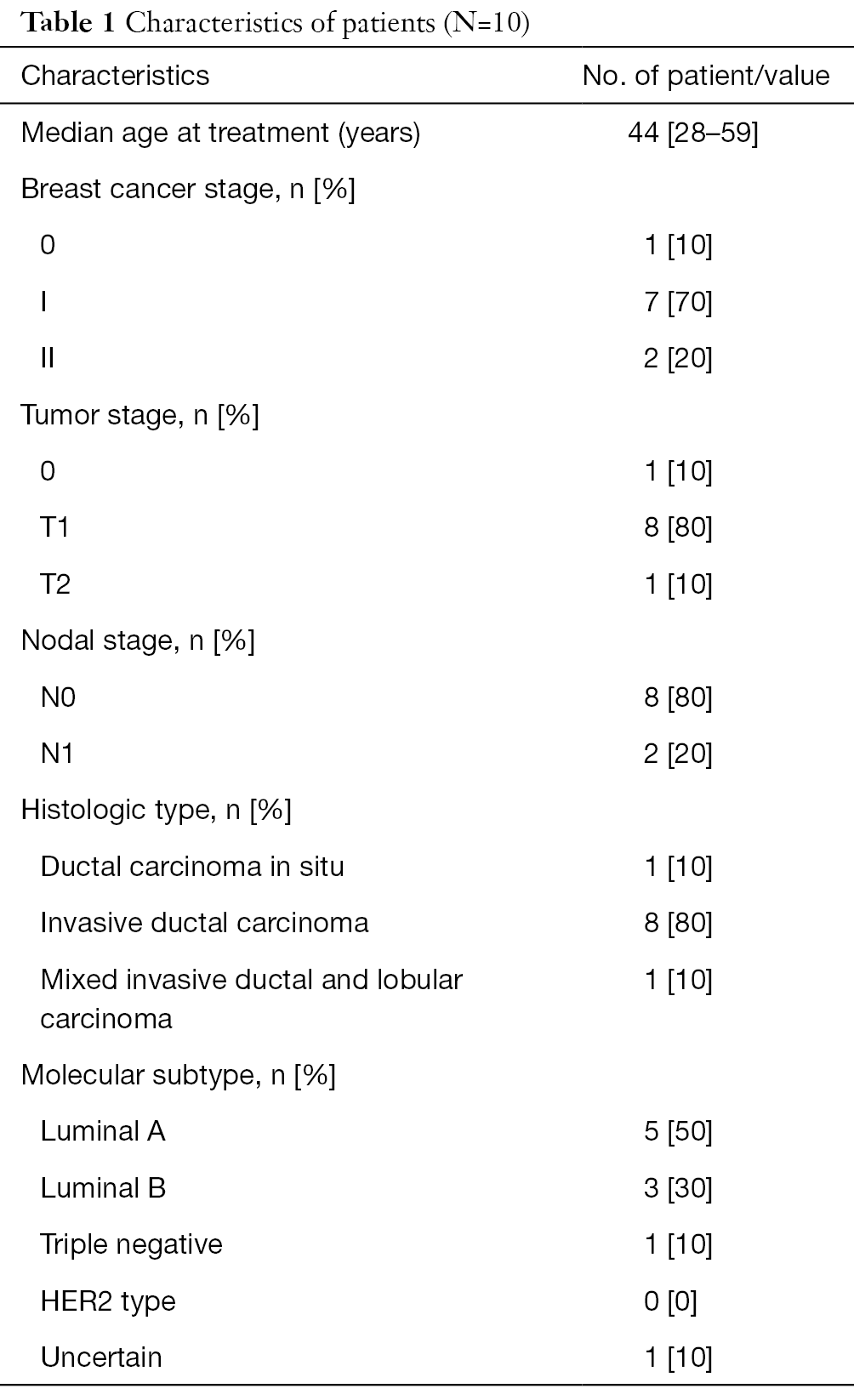 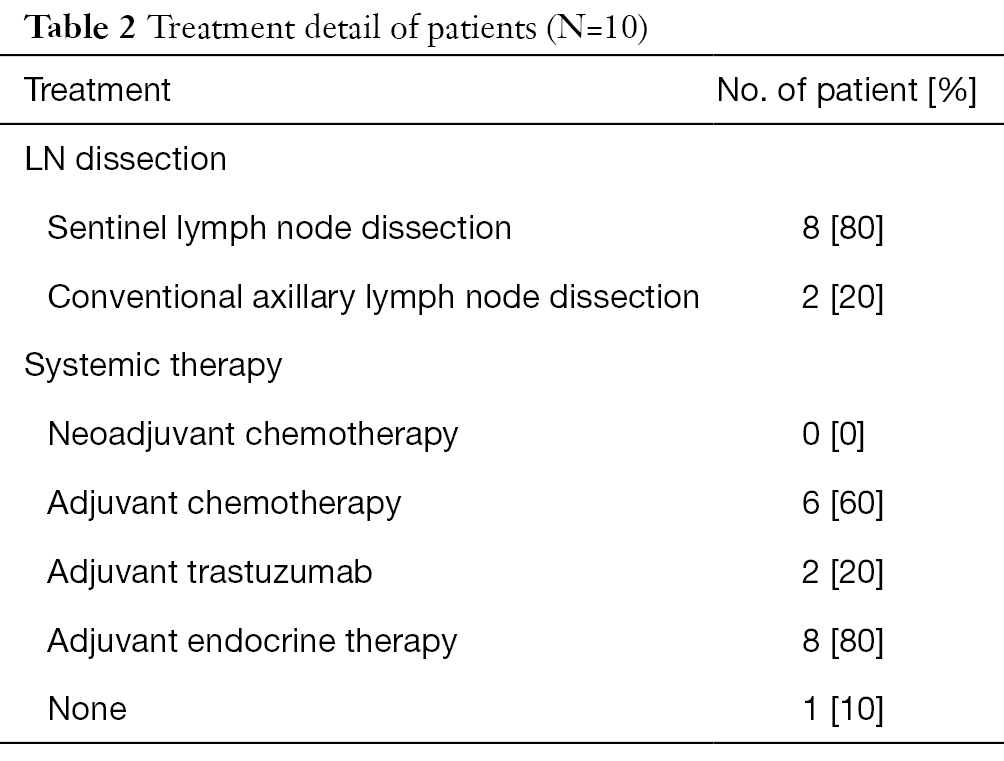 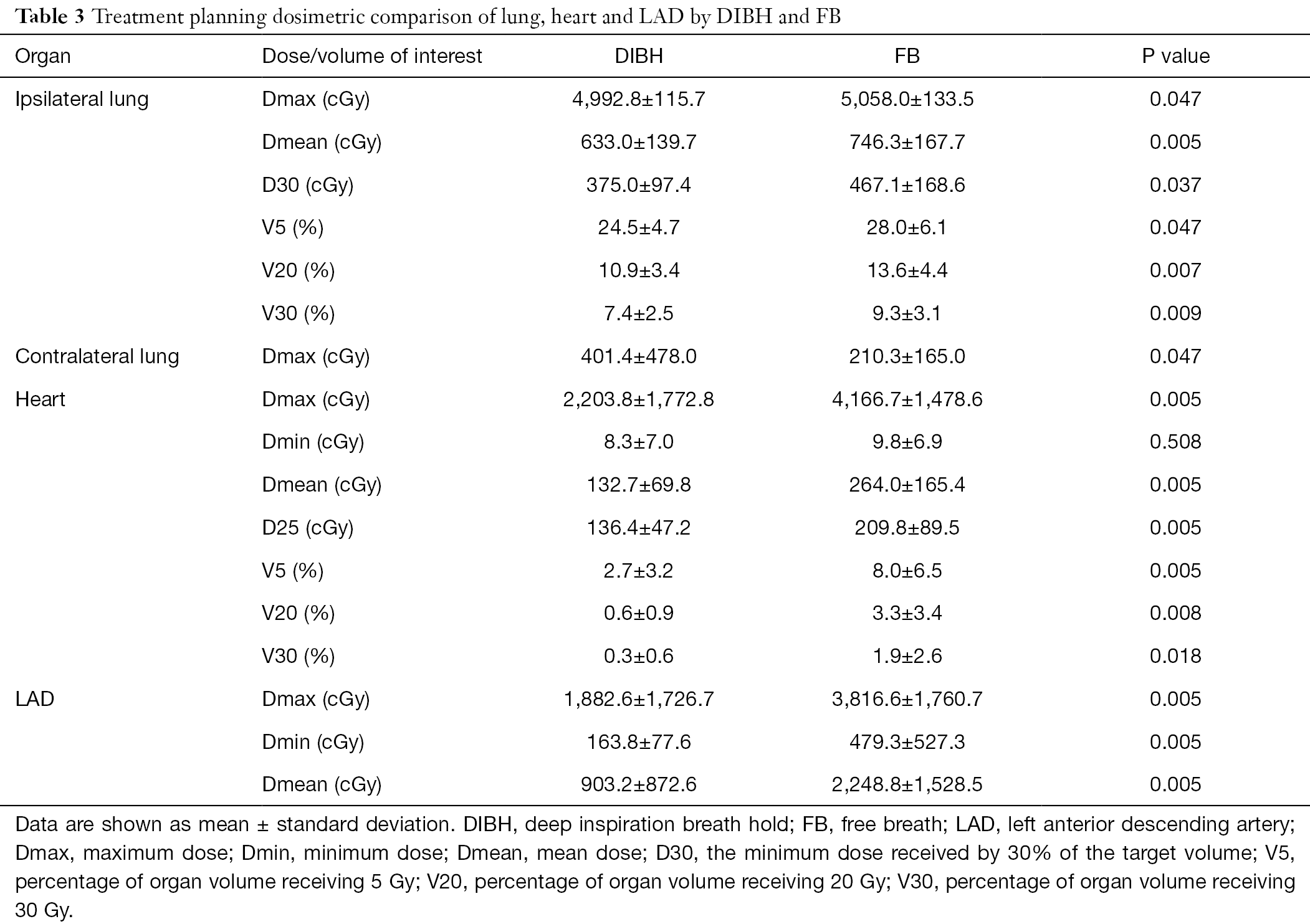 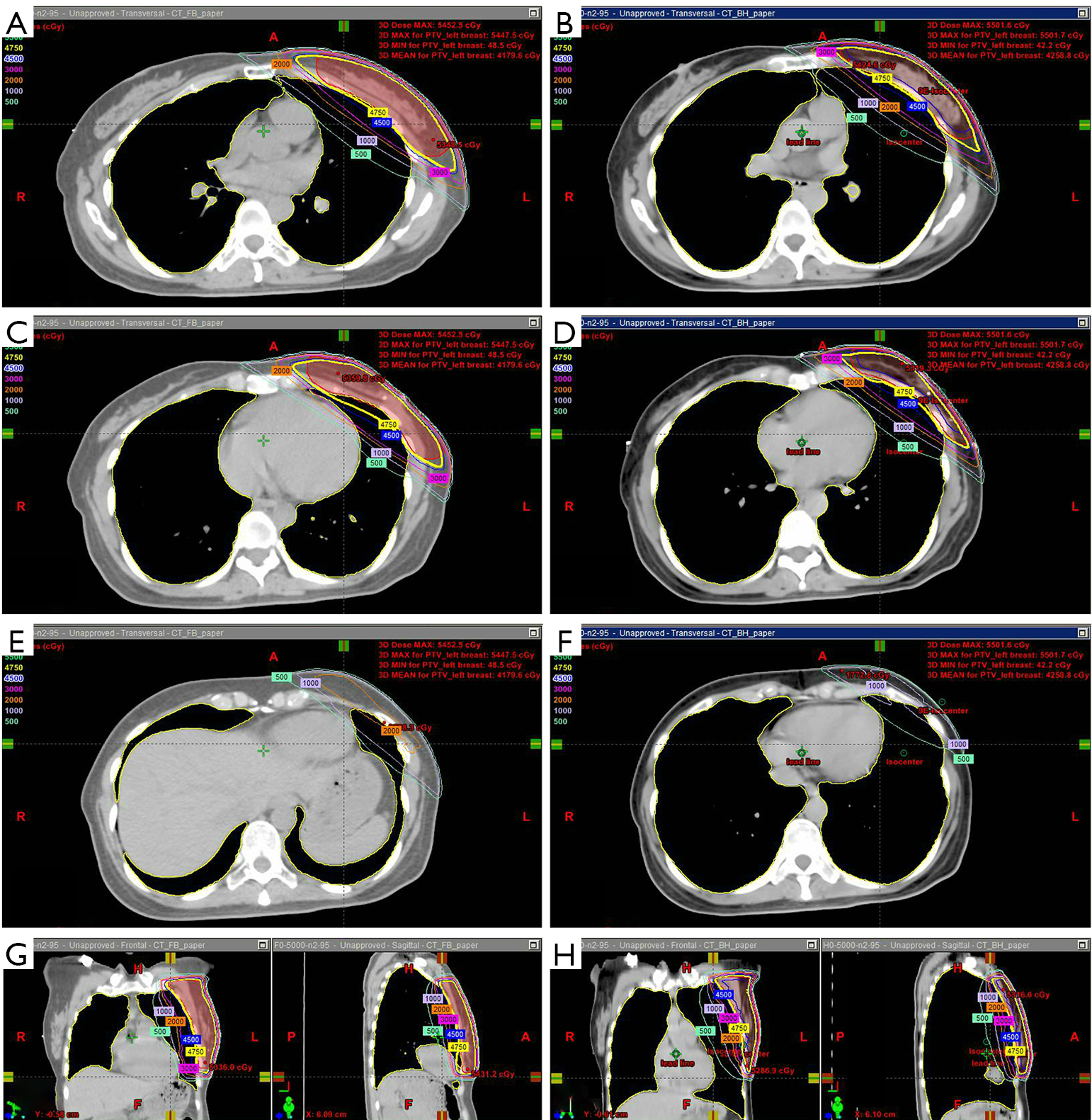 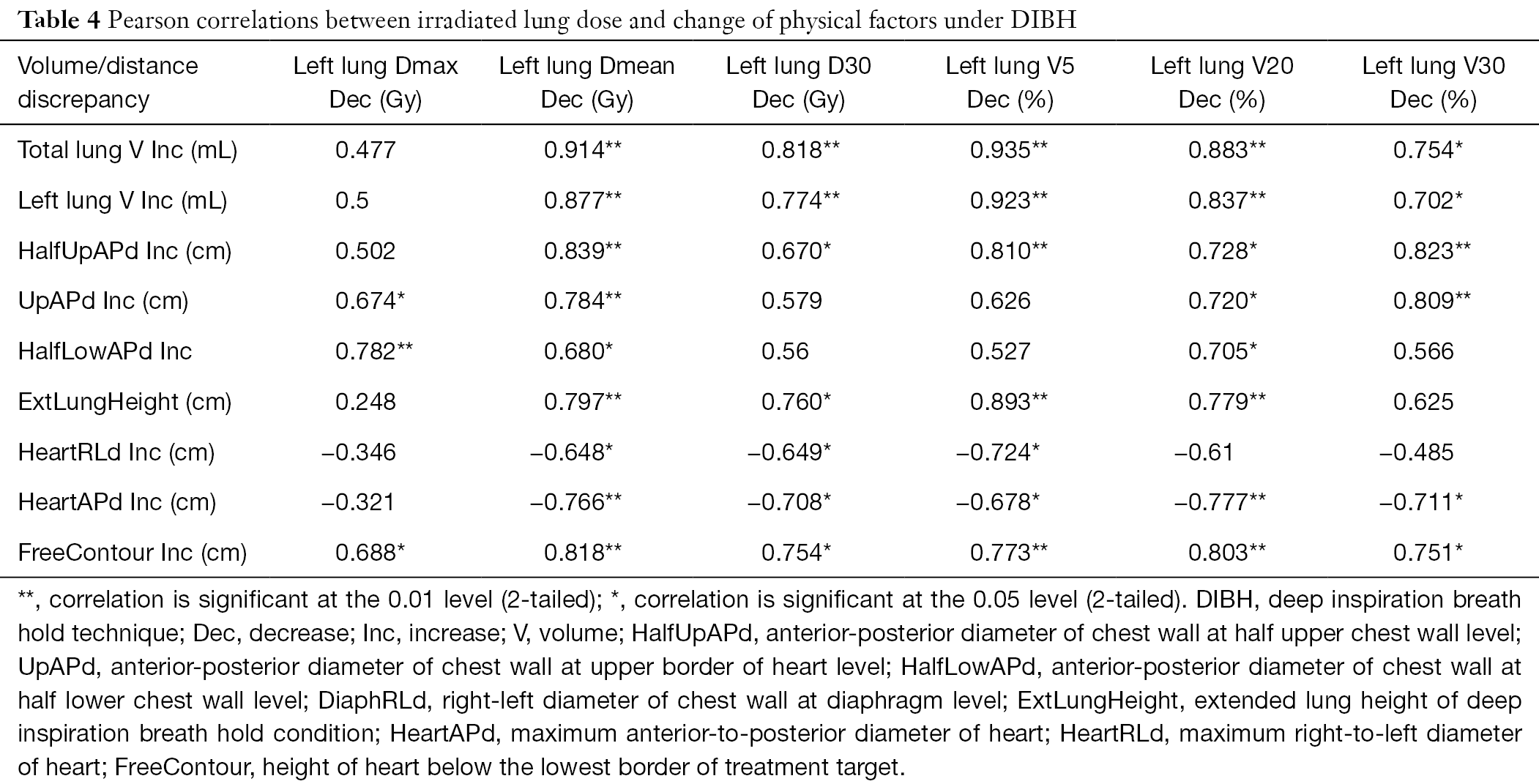 Studies have shown that breast conservative surgery with adjuvant radiotherapy reduces local failure rate (2,3) and mortality rate (3) for early stage breast cancer. Adjuvant radiotherapy, however, also increases excess lung and heart disease over 15 years for these patients (2,5). Efforts to reduce cardiac toxicities attributed to irradiation include prone position, intraoperative radiotherapy, DIBH, etc. DIBH has been proved to reduce heart and lung radiation exposure during treatment effectively (6,8-10), and possible factors and assistant tools that may affect DIBH effectiveness have been investigated (10,11). For instance, excess radiation exposure to intrathoracic organs can be attributed to chest wall irradiation, especially for post-mastectomy group. The DIBH technique therefore contributes more benefits to this patient group compared to post-breast-conservative-surgery group (9). Greater inspiratory lung volume was reported to enhance the benefit of DIBH (10). The correlation between the effectiveness of DIBH and various anatomic characteristics was investigated by Register et al., where only the cardiac mean dose reduction can be predicted with the reduction of heart volume in field (11).

Due to chest wall elevation during inspiration, treatment target position will elevate and lower border of heart will descend caused by lung volume expansion and diaphragm descending. The change of heart lower border and the elevation of target contour lower border lead to increase of free-contour height of heart, which significantly reduced Dmax, V30 of heart and Dmax of LAD. Register et al. reported the reduction of heart volume in field (HVIF) was the only factor shows significant correlation in heart mean dose and other cardiac and LAD measurements among other investigated parameters (11). Our data revealed the similar result but further emphasized the importance of rib cage elevation of DIBH.

Respiration is a complicated motion including gliding of rib cage to up and anterior direction, increase of APd and RLd of chest wall, motion of diaphragm, and shape alteration of heart. Different breath pattern such as chest breathing and diaphragmatic breathing will cause different presentation and combination of above factors (12,13). Under complicated respiration, RPM system detects the marker box on the end of chest wall at the level of diaphragm and assists to ensure the reproducibility of DIBH. However, RPM system was not designed to achieve optimal position of DIBH. The marker box detected by RPM can only represent the changing of APd at diaphragm level and part of the changing of half of lower chest wall level. Increase of APd at these two levels had positive correlation with reduction of both lung and heart dose according to our data. Complete change of chest wall cannot be monitored by RPM during DIBH. For instance, APd at half of upper chest wall and upper heart border are also crucial factors to reduce the radiation exposure of lung, yet their change cannot be detected by RPM system. Multiple level monitoring cooperated with RPM system is suggested according to our result for achieving both optimal position and reproducibility. Further delicate monitoring system needs to be constructed.

Our study has several limitations. First, the patient number of this study was small, further investigation with larger number is needed. Second, the PTV margin added in this study was 5 mm which may be modified in different institution or based on each patient condition. Increased PTV margin could lead to increased OAR dose. The result of this study should be interpreted under the PTV 5 mm precondition. Third, the levels we defined for physical factor measurement were based on CT image. However, for clinical practice, body surface marker would be more practical for daily set up. For this reason, we further reviewed our data attempting to construct the connection between body surface marker position and CT image level. Unfortunately, due to large individual difference of body shape such as breast tissue size, shape, position and individualized forced vital capacity leading to different diaphragm position, the attempting was failed. Fourth, all targets were contoured by the same radiation oncology resident according to RTOG guideline and reconfirmed by attending physician responsible for each patient as 2nd radiation oncologist. Since the responsible attending physician may be different for each patient, a third radiation oncologist for reviewing all the contours may be helpful in consistency inspection. All treatment plans were then performed by the same physicist to ensure the treatment planning technique consistency. Fifth, this study only compared the treatment plans of 50 Gy to left whole breast tissue to evaluate the effect to dose distribution contributed by DIBH more clearly. However, breast cancer treatment contained not only 50 Gy to left whole breast tissue but also boost dosage to primary tumor bed. The primary tumor bed boost also increases additional dose to heart and lung tissue. Further investigation of effect from primary tumor bed location and tumor bed boost treatment with larger number of patients will be needed.

In our hospital, DIBH patients were told to perform deep inspiration as much as they can, and the DIBH was monitored passively by RPM system with one-point evaluation. However, there were patients complained about the instruction of DIBH technique being vague. Under the instruction of deep inspiration as much as they can, it’s uncertain that patient would perform chest or diaphragmatic breathing pattern, or if they know how to achieve similar interfractional chest wall motion. RPM system ensures the reproducibility but not designed for achieving optimal position of chest wall during DIBH. Based on our results and also patient complaint during daily practice, we have built a new CT-based instruction model for DIBH treatment. During CT simulation process, a free breath CT was performed first in order to identify suitable monitor levels including half of upper chest level, upper border of heart level, half of lower chest level, and diaphragmatic level. With these identified CT-based levels, corresponding surface position can be marked according to the distances from the set up center. Body surface markers and marker box were then placed on each level for patient education and training. Patient education is the following crucial step. With the CT-based instruction model, patients were taught to identify the markers on their body surface and practice deep inspiration to keep marked levels elevation under RPM system assistance. After confirming the desired breathing pattern has been understood well, patients can practice the breathing pattern at home during waiting for treatment planning. For daily treatment, patient was asked to perform DIBH and each level elevation was confirmed by RPM system as practice first, then the real treatment would begin with marker box back to diaphragm level. The RPM system or other multiple points monitoring system can be utilized when performing DIBH technique. The clear instruction and monitoring can help patients not only proceed reproducible DIBH every day, but also help them to achieve the inspiration goal easier, and further decrease their anxiousness. Accompanied with patients’ active cooperation, the DIBH technique can be carried out more precisely and minimize the excess radiation exposure to intrathoracic organ.

For left breast cancer patients received left partial mastectomy and adjuvant radiotherapy, DIBH technique is considered to reduce unnecessary dose to lung, heart, and LAD. The RPM system provides an easy way to monitor DIBH and is useful to decrease OAR dose. However, respiration is a complicated motion and the current RPM system cannot represent every physical factor change during respiration. A multiple level monitoring system was suggested, which provides a new direction to evaluate DIBH performance and a new way to enhance the effectiveness of DIBH through comprehensive monitoring. Patient education to explain the idealist chest wall expansion condition with DIBH is important and our CT-based instruction model system can provide a clearer instruction. Further investigation of effect from primary tumor bed location and tumor bed boost treatment with larger number of patients will be needed.