Natural killer/T-cell lymphoma (NKTL) accounts for less than 1% of lymphomas in Europe and North America, but it occurs more frequently with 6% to 15% of lymphomas in East Asia and Latin America (1-4). In Taiwan, NKTL constitutes 10.5% to 12.2% of lymphomas, and there are 350 to 380 new NKTL cases per year (5). Nasal cavity is the most common site of the extranodal NKTL, and 70% to 90% of patients with nasal NKTL present with early-stage localized disease (4,6,7).

Based on the retrospective studies before 2000s, radiotherapy alone with doses >50 Gy via conventional 2-domensional (2D) technique was the mainstay treatment for stage IE/IIE localized nasal NKTL. In the era of 3-dimensional conformal radiotherapy (3DCRT) in 2000s, combined modalities with concurrent or sequential chemoradiotherapy for localized nasal NKTL provided promising results with 80% to 90% complete response (CR) rate and 70% to 80% 3-year overall survival rate in the prospective phase I/II trials in Japan, Korea, and China (3,8-10). Because of the rarity of nasal NKTL and relative small patient numbers of these non-randomized trials, the optimal treatment strategy of the disease is still controversial (2).

Fluorine-18-fluorodeoxyglucose positron emission tomography with computed tomography (FDG-PET/CT) scan serves as a useful tool for cancer staging, radiotherapy target volume delineation, and treatment response assessment. FDG-PET-based radiotherapy planning has been widely applied in the treatment for lung cancers, head and neck cancers. However, it is not well-defined in nasal NKTL (11,12).

Here we aimed to evaluate early responses to concurrent chemoradiotherapy (CCRT) for patients with localized nasal NKTL and integrate pretreatment and posttreatment FDG-PET/CT scans for target delineation and response assessment.

We retrospectively reviewed patients who were histologically-diagnosed and clinically staged I/II extranodal nasal NKTL in Far Eastern Memorial Hospital from January 2014 to December 2015, with the approval of the Institutional Review Board (IRB approval no: FEMH-IRB-104171-E). Patients receiving CCRT as the primary treatment were included. Patients who had previous cancer history or second primary malignancy were excluded. Pretreatment evaluations including a complete history review, physical examination, complete blood counts, biochemistry tests, liver function tests, blood tumor markers, plasma Epstein-Barr virus (EBV) DNA loads, nasopharyngoscopy with biopsies, bone marrow aspiration, esophagoscopy, abdominal ultrasonography, and contrast-enhanced CT scans were recorded. FDG-PET/CT scans were performed before the treatment and at 1 month following CCRT. The disease was staged according to the Ann Arbor staging system. Part of the study data were based on Cancer Registry database of our hospital.

FDG was injected in the PET Center of Far Eastern Memorial Hospital. All patients fasted for at least 4 hours before FDG injection. The blood glucose levels were less than 140 mg/dL. The injected dose was adjusted according to the body weight (5 MBq/kg, 0.135 mCi/kg). A 30-minute whole-body PET scan from skull to thigh was performed on a PET/CT scanner (Discovery VCT, GE Medical Systems, Milwaukee, WI). The emission data were acquired in 3D mode, and axial field of view. The resolutions of the scanner were 15.7 cm and 4.8 mm full width at half maximum, respectively.

A low-dose whole-body CT was performed for attenuation correction of the emission data and anatomic correlation. No intravenous (IV) or oral contrast agents were given in the series. Both PET and CT scans were performed for patients under normal tidal breathing. From the raw emission data collected, the images were reconstructed by iterative reconstruction with CT-derived attenuation correction using the ordered subsets expectation maximization algorithm.

Quantitative data analyses were derived from SUV, which were normalized to body weight and calculated using data from the attenuation-corrected images by the automatic software. The SUVmax of the lesions were then calculated and analyzed.

To integrate FDG-PET metabolic information in the radiotherapy planning system, FDG-PET/CT simulation were performed simultaneously in the same PET/CT scanning room, with thermoplastic mask-based immobilization for the patients.

If setup-errors of the patient more than PTV margins were found on the helical megavoltage CT images of tomotherapy, an adaptive re-planning would be required to improve the accuracy of radiation dose distribution to the targeted areas.

All patients were evaluated every week during the courses of CCRT. Toxicities were graded according to the Common Terminology Criteria for Adverse Events (CTCAE) version 3.0. Patients received regular follow-ups by our multimodality treatment team every 3 months. Post-treatment CT or magnetic resonance imaging (MRI) of head and neck were done at 1, 3, and 6 months following completion of the 3rd cycle of CCRT. Follow-up visits included history review, physical examination, serum biochemistry, and other tests as clinically indicated. For the suspicious lesion on FDG-PET, CT or MRI images, nasopharyngoscopy with biopsies was performed to rule out any residual tumor or recurrence. Responses to CCRT and treatment-related toxicities were analyzed.

Four male patients were identified in this retrospective study. Characteristics of patients and results of CCRT were summarized in Table 1. The median age at diagnosis of patients was 61 years old (range, 42–63 years old). Of the four patients, 2 (50%) had stage IE and 2 (50%) had stage IIE disease with multiple neck nodes. The in situ hybridization for EBV-encoded RNA (ISH-EBER) status was detected in four patients. The initial plasma EBV DNA loads were detectable in 2 (50%) patients, and both of their EBV DNA loads became undetectable after treatment. 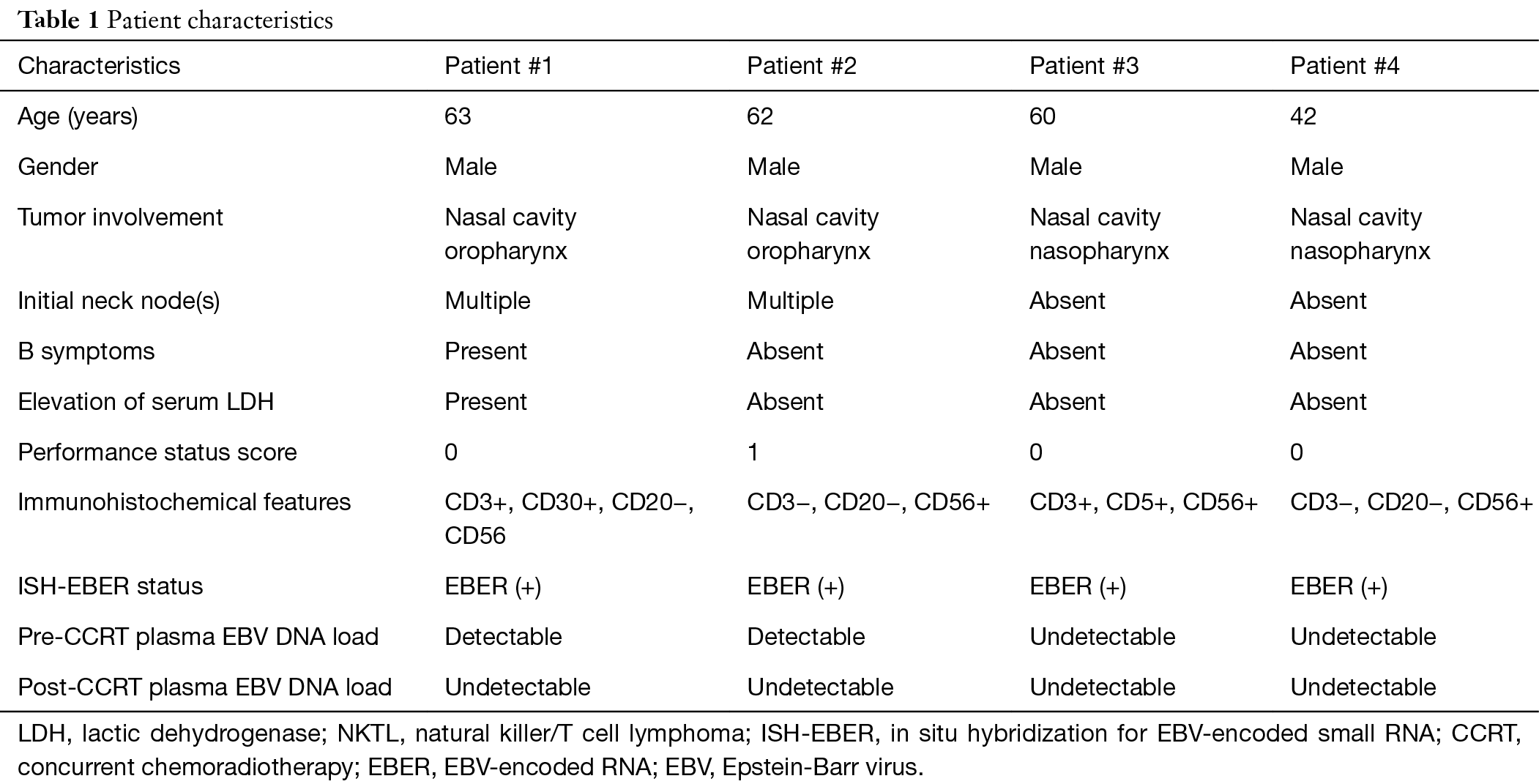 From the reports of the radiation treatment planning system, the mean tumor volume of these patients was 25.4 cm3. The mean doses of GTV_56, CTV_56, and CTV_50.4 were 58.09 Gy, 58.12 Gy, and 55.30 Gy. Radiation doses to organs at risk were within acceptable tolerances. The mean doses surrounding organs were as follows: right parotid glands, 18.63 Gy; left parotid glands, 18.52 Gy; larynx 18.45 Gy; pharynx 31.02 Gy. The detailed quantitative dose indices for tumors and organs at risk of the patients were listed in Table 2. The representative target volume delineation and radiation dose distribution were shown in Figure 1. 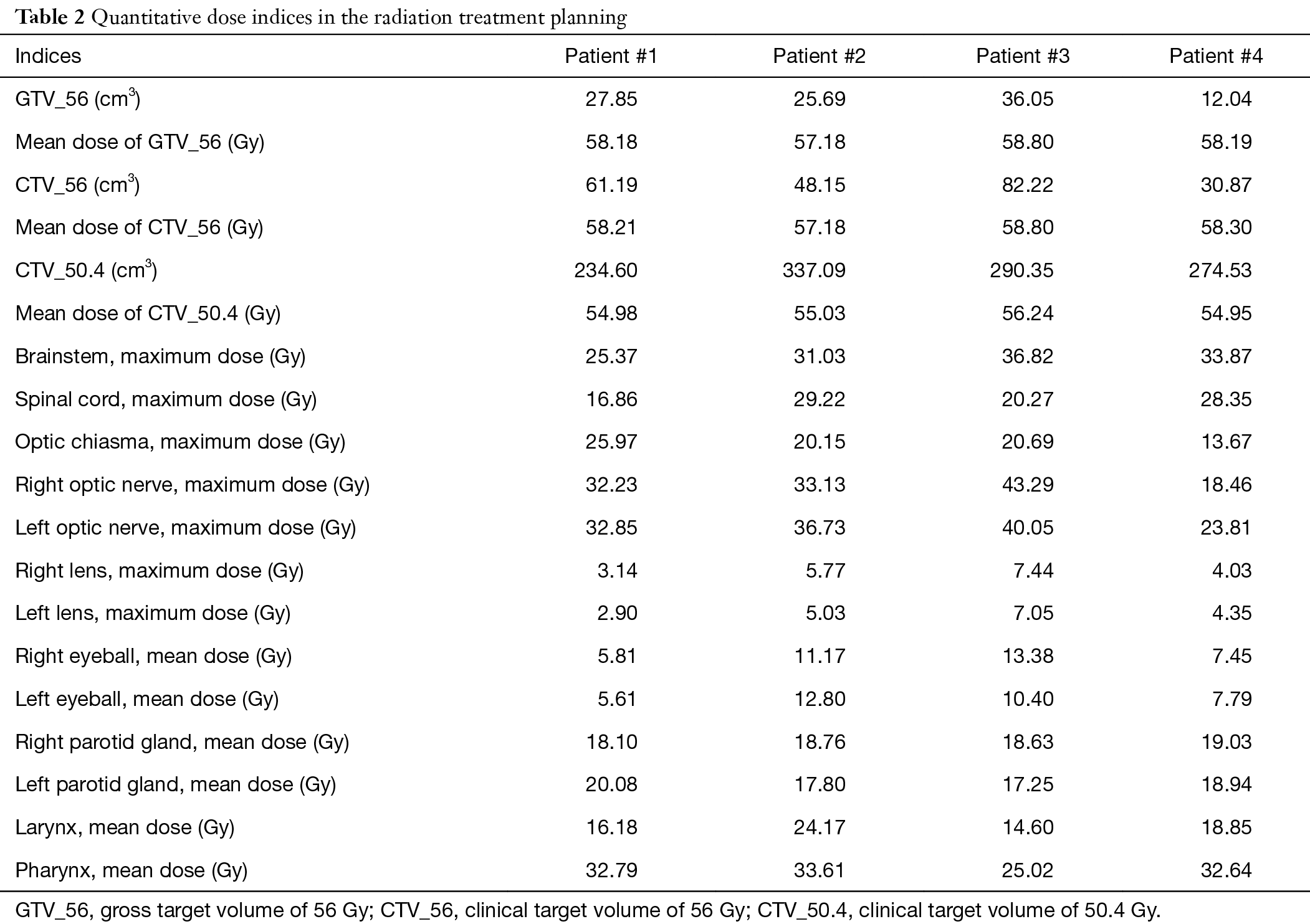 All patients tolerated well to the IMRT-SIB (56 and 50.4 Gy) via image-guided tomotherapy and three cycles of chemotherapy without interruption during the courses of CCRT. The mean duration of radiation therapy was 39.5±2.6 days (range, 38.0–43.0 days).

At 1 month following completion of CCRT (completion of the 3rd cycle of chemotherapy), all 4 (100%) patients achieved CR by CT, MRI images and FDG-PET metabolic criteria. The treatment responses to CCRT by utilizing FDG-PET/CT were listed in Table 3.

Representative images of metabolic CR of nasal tumors and nodes on FDG-PET/CT scans were shown in Figure 2A-D. 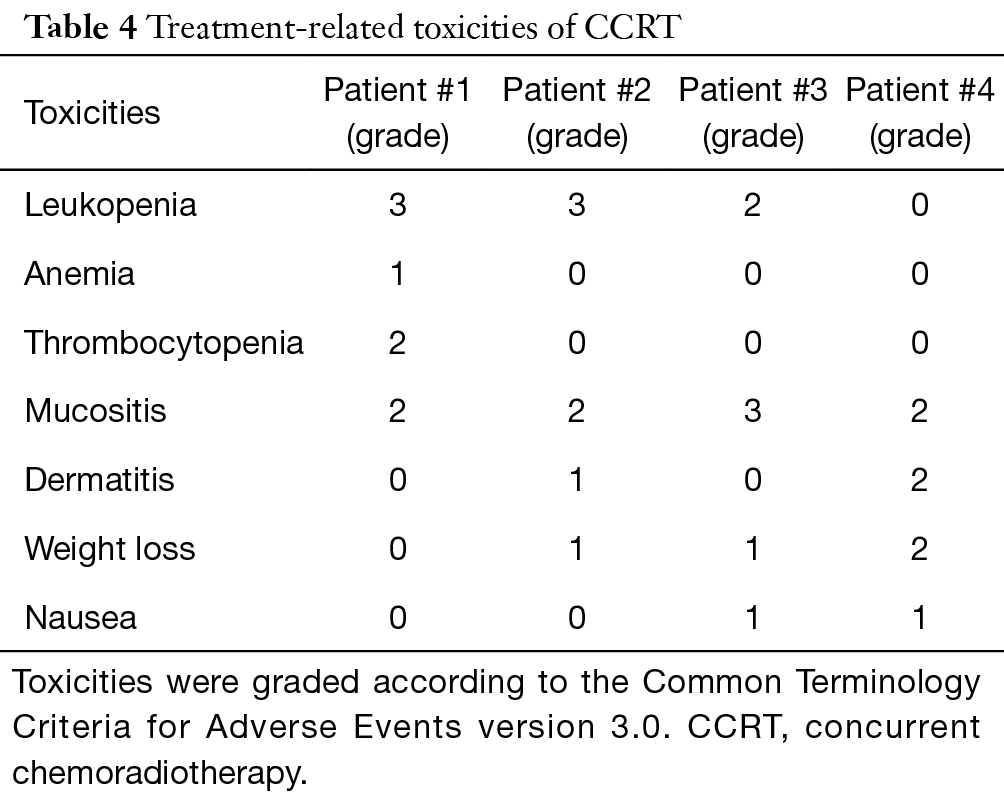 At a median follow-up of 29 months (range, 21–33 months), four (100%) patients are currently alive in durable complete remission and disease-free status.

Based on phase I and II trials investigating combined modalities, including CCRT in Japan or sequential chemoradiotherapy in China and Korea, the radiation doses ranged from 40 to 60 Gy were delivered by 2D or 3DCRT techniques. Combined modalities achieved satisfactory CR rates and survivals with acceptable toxicities (3,8-10).

Radiotherapy techniques have greatly advanced since previous studies of treatment for nasal NKTL after 2000s (1,7-10,13,14). IMRT or volumetric modulated arc therapy (VMAT) make it possible to deliver a higher radiation dose to the tumor while sparing unnecessary doses to the surrounding normal tissues (15-17). Helical tomotherapy (Tomotherapy Inc., Madison, WI) is an image-guided IMRT equipment which can further deliver highly-conformal radiation doses to the tumor precisely and minimize doses to critical organs for head and neck malignancies (18,19).

Our novel approach utilized image-guided radiotherapy with integration of FDG-PET-guidance in the radiation treatment planning and initial response assessment for patients with localized nasal NKTL. In our study, we utilized a modern IMRT-SIB technique in the setting of CCRT, with 56 Gy to gross disease and 50.4 Gy to the involved filed simultaneously. Furthermore, IMRT-SIB technique via image-guided tomotherapy provided adequate radiation dose coverage to tumors and minimized dose to normal organs. Our preliminary results of a 100% CR rate were comparable to the studies employing combined modalities. Meanwhile, the most common grade 3 toxicities such as leukopenia (50%) and mucositis (25%) in our study were also acceptable as compared to previous reports of combined chemoradiotherapy (1,3,8,10).

PET-guided delineation and dose escalation of target volumes are still not well-defined in nasal NKTL (11,12). In a previous meta-analysis of eight studies, the pooled sensitivity and specificity in the diagnosis of 135 NKTL patients were 0.95 (95% CI: 0.89–0.98) and 0.40 (95% CI: 0.09–0.78), respectively (20). Another retrospective study focused on prognostic value of the interim (n=62) and post-therapy (n=47) FDG-PET/CT in patients with NKTL, the concordance between clinical CR on CT or MRI and interim PET negativity was 89.5%; the positive predictive value (PPV), negative predictive value (NPV), and accuracy of interim PET in predicting progression-free survival (PFS) were 77.8%, 76.5%, and 77.4%. Of the post-therapy FDG-PET/CT, the concordance between clinical CR and post-therapy PET negativity was 93.5%; the PPV, NPV, and accuracy in predicting PFS were 88.9%, 58.6% and 70.2% (21). In our study, the pretreatment and early follow-up FDG-PET/CT scans served as a useful tool for NKTL staging, radiotherapy target volume delineation, and treatment response assessment. Furthermore, the integration of FDG-PET and simulation CT images in our radiotherapy treatment planning offered biological and metabolic information for delineation of FDG-avid tumor volumes. Based on the PET-guided radiotherapy treatment planning, radiation oncologists could precisely delineate the target volume of tumors and nodes. Also, the concordance of post-treatment FDG-PET, MRI and CT scans provided helpful information for assessing treatment responses. With modern radiotherapy techniques including FDG-PET-guided delineation, IMRT-SIB planning and image-guided helical tomotherapy, we could accurately deliver conformal radiation doses to the target while sparing surrounding normal organs including brain, spinal cord, nerve, parotid glands, oral mucosa and skin (15-19,22).

Although our results revealed durable initial responses and acceptable toxicities, there were some limitations including relative small numbers of patients and retrospective non-randomized nature because of the rarity of the disease. Further clinical trials and long-term survival follow-ups are required to confirm the validity and reliability of these modern tools.

Our results suggest that CCRT with modern image-guided helical tomotherapy provides a durable initial CR and tolerable side effects for patients with localized nasal NKTL. Integrated FDG-PET-guided radiotherapy is feasible for target delineation and response assessment. Our novel approach is worthy of further investigation, and long-term survival follow-ups are warranted.

Ethical Statement: This work was approved by the Institutional Review Board of Far Eastern Memorial Hospital (IRB approval No. FEMH-IRB-104171-E).