Intestinal-type adenocarcinoma (ITAC) is a very rare tumor, accounting for possibly 1.4% of all the sinonasal and skull base malignancies (1). The major histological types in sinonasal region are squamous cell carcinoma (46%), malignant lymphoma (14%), adenocarcinoma (13%) and malignant melanoma (9%). As its name implies, it has histopathological analogy with gastrointestinal tract adenocarcinomas (2). They are indistinguishable from those of a primary colonic neoplasm and are histologically composed of columnar, goblet and mucus-producing cells. ITAC originates in the ethmoid sinus and the upper section of the nasal cavity, and is likely to involve anterior cranial base. We present a rare case of sinonasal ITAC with right orbital cavity involvement supported by pathologic proof. 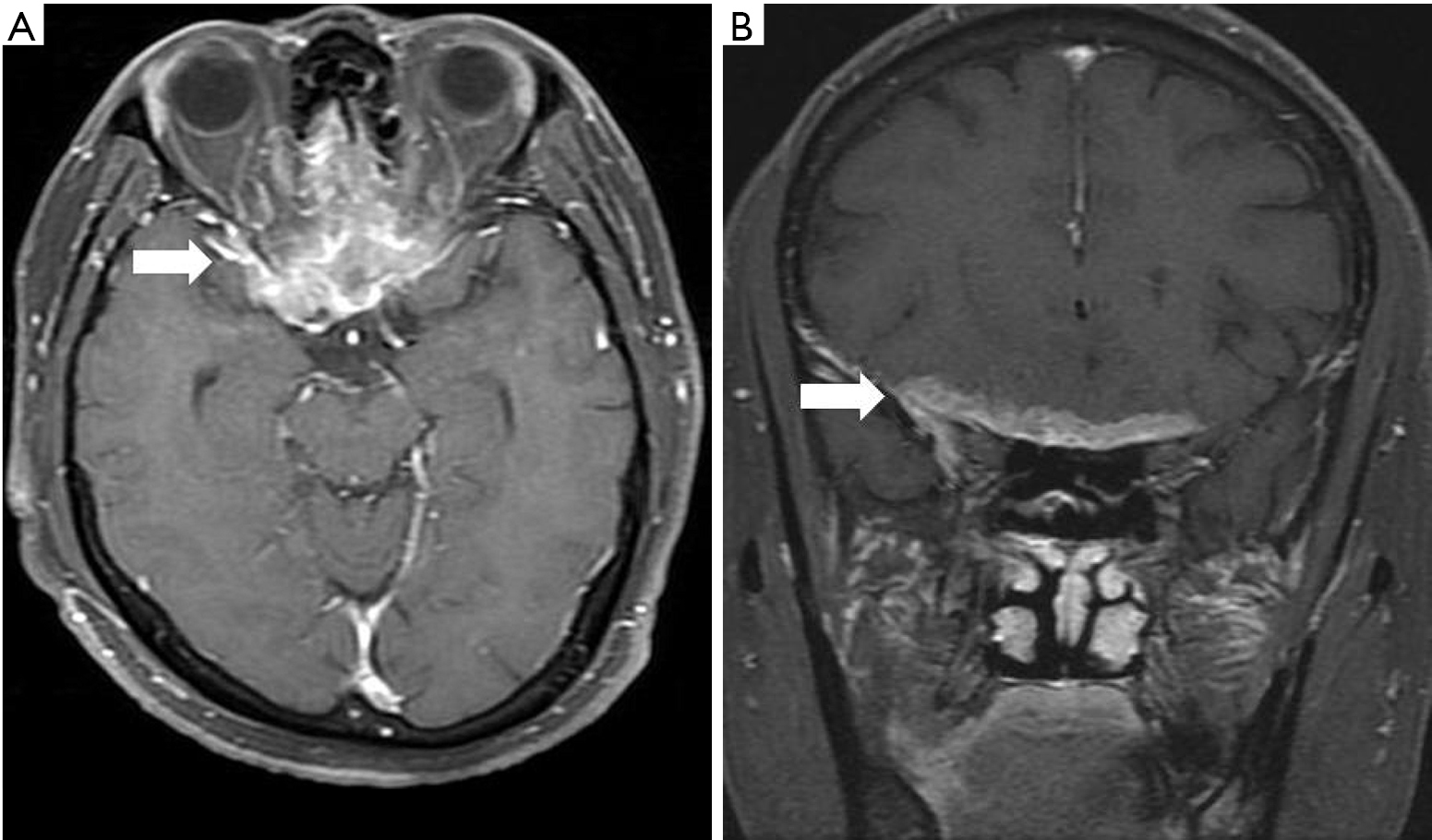 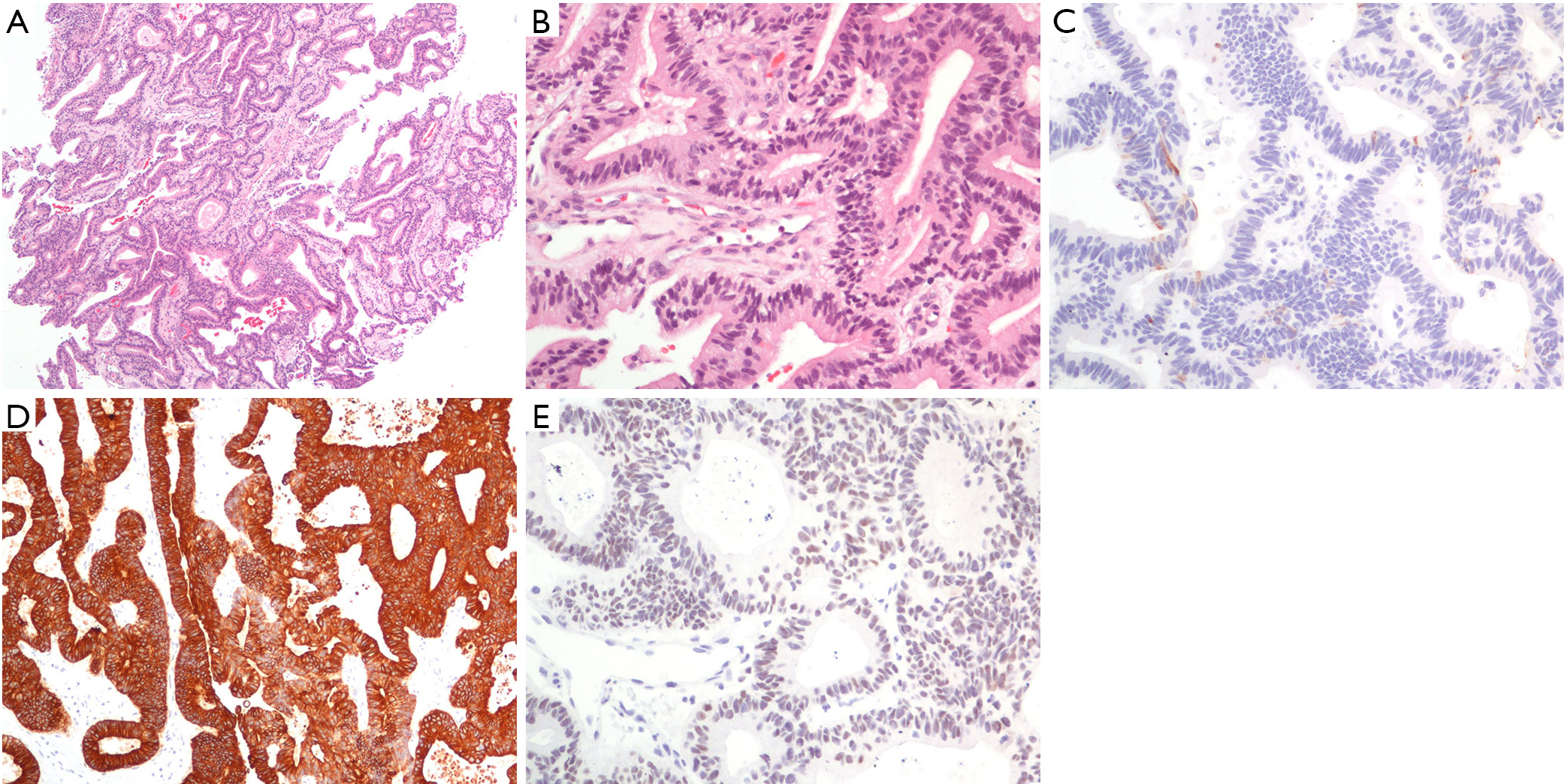 He received radiotherapy 1 month after the operation. The patient adopted a supine posture and underwent 3 mm-sliced computed tomography (CT) scans with delineation of the target volumes. The gross tumor volume (GTV) was specified as the gross extent of tumor as demonstrated by postoperative MRI and CT. Three clinical target volumes (CTV1, CTV2 & CTV3) were defined. The prescribed doses to CTV1, CTV2 and CTV3 were 70, 59.5 and 52.5 Gy in 35 fractions respectively. The CTV1 was defined as the GTV plus 1-cm margin and the CTV2 was defined as an ethmoid sinus, frontal sinuses, nasal cavity, left sphenoid sinus, while the CTV3 was defined as brain invasion surrounding tissue. The planning target volume (PTV) contained a 0.3-cm expansion of CTV (Figure 3). Organs at risk included the chiasm, optic nerve, orbits, lens, brainstem, and parotid glands. The treatment plan was made by the Hi-Art helical tomotherapy, version 2.2.4.1 (Tomotherapy, Inc., Madison, WI) unit. 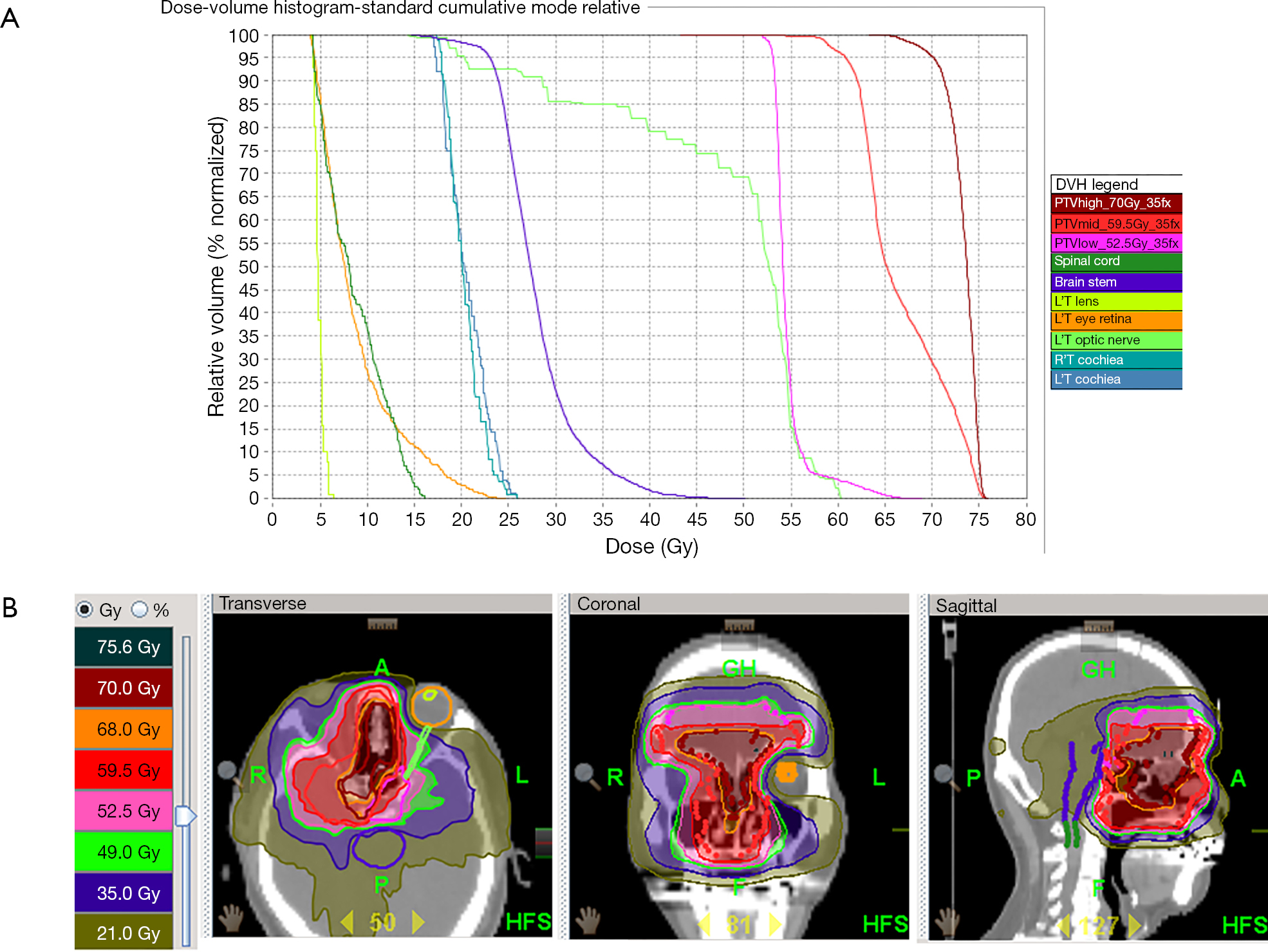 Before radiotherapy treatment, the patient was blind in the right eye and had no light reflex. After radiotherapy, blindness and light reflex improved. The acute complications of radiotherapy were grade I dermatitis and left otorrhea. We examined his tumor status by MRI. After 37 months, MRI still showed partial response of the tumor (Figure 4). After 37 months of follow-up, no progression disease or distant metastasis was found. 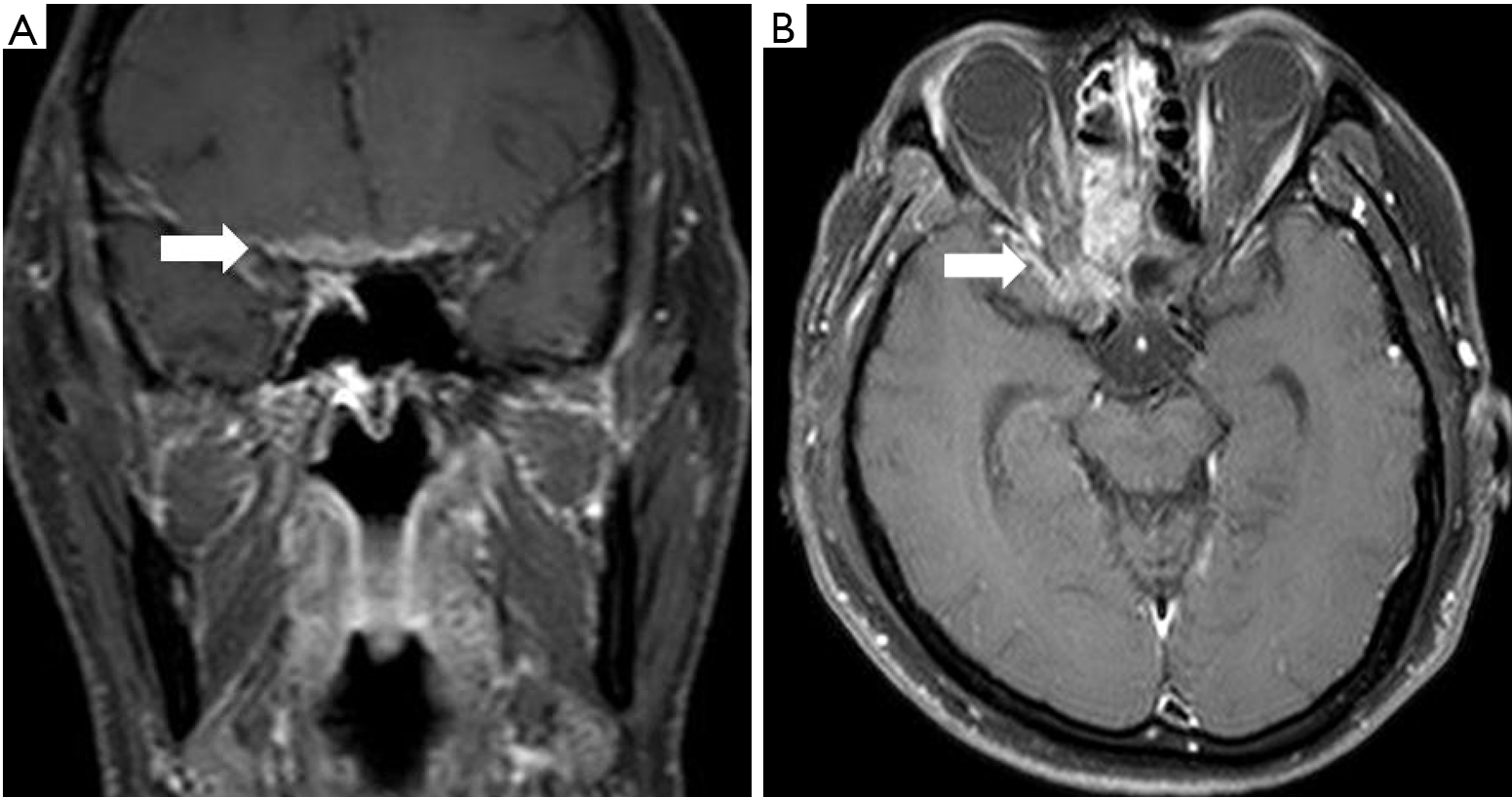 ITAC is a rare tumor. ITAC usually develops from the ethmoid sinus, predominating in males between 40 to 70 years of age (3). ITAC may occur as an occupation-related hazard from exposure to wood dust and leather tanning chemicals (4,5). Interestingly, this patient had no history of wood dust and leather tanning exposure. No report has associated ITAC with waste gas inhalation.

Definitive radiotherapy is less efficient and has more side effects than surgery. It also has poorer outcome than surgery +/− radiotherapy. Jansen et al. (6) reported 73 paranasal sinus carcinoma patients including 12 adenocarcinoma subtypes. Five-year local control rate was 47% with definitive radiation, compared to 65% with radiotherapy + debulking surgery; however, this has no statistical significance. On the other hand, 5-year overall survival was 9% vs. 60% and 5-year disease-free survival was 6% vs. 53%, both with statistical significance. Because of the tumor’s unresectable status, this patient received post-operative RT and he was found to have tumor partial response.

Prophylactic neck irradiation is not necessary. Radiotherapy need only be given to the primary site. A GETTEC (Groupe d’Etudes des Tumeurs de la Tête et du Cou) retrospective multicenter study (7) showed only three lymph node metastasis cases after treatment within 418 ethmoid adenocarcinoma cases. According to Gabory et al. (8), only one case had cervical lymph node metastasis (N2a) 3 years after treatment within 95 ethmoid adenocarcinoma cases. This patient also had no neck metastasis after radiotherapy.

No phase III trials have been performed in chemotherapy for ITAC. ITAC could be divided into two groups: wild type TP53 or mutated TP53 tumors by Lieitra et al. (13). After neoadjuvant cisplatin fluorouracil treatment, pathologic complete remission rates were 83% in wild type TP53 tumors and 11% in mutated TP53 tumors respectively (P≤0.0001) (13). However neoadjuvant treatment for locally advanced ITAC is not yet the standard treatment. According to NCCN Guidelines, postoperative systemic therapy/radiotherapy is indicated for patients who have positive margins or intracranial extension in ethmoid sinus cancers (category 2B recommendation).

T classification is an important prognostic factor for sinonasal ITAC; 5-year survival goes down from 80% to 15% when passing from a T1 to a T4b tumor. The study from Ghent University Hospital reported that cribriform plate involvement was the independent factor found on multivariate analyses to predict for local relapse (hazard ratio, 0.058; 95% confidence interval, 0.011–0.297) (9). Those with invasion of the cribriform plate had a median survival of 9.7 months. When cancers involve the cribriform plate, adequate coverage is difficult without exceeding the radiotherapeutic tolerance for the critical structures nearby. This case also had cribriform plate involvement and had acceptable outcome unexpectedly.